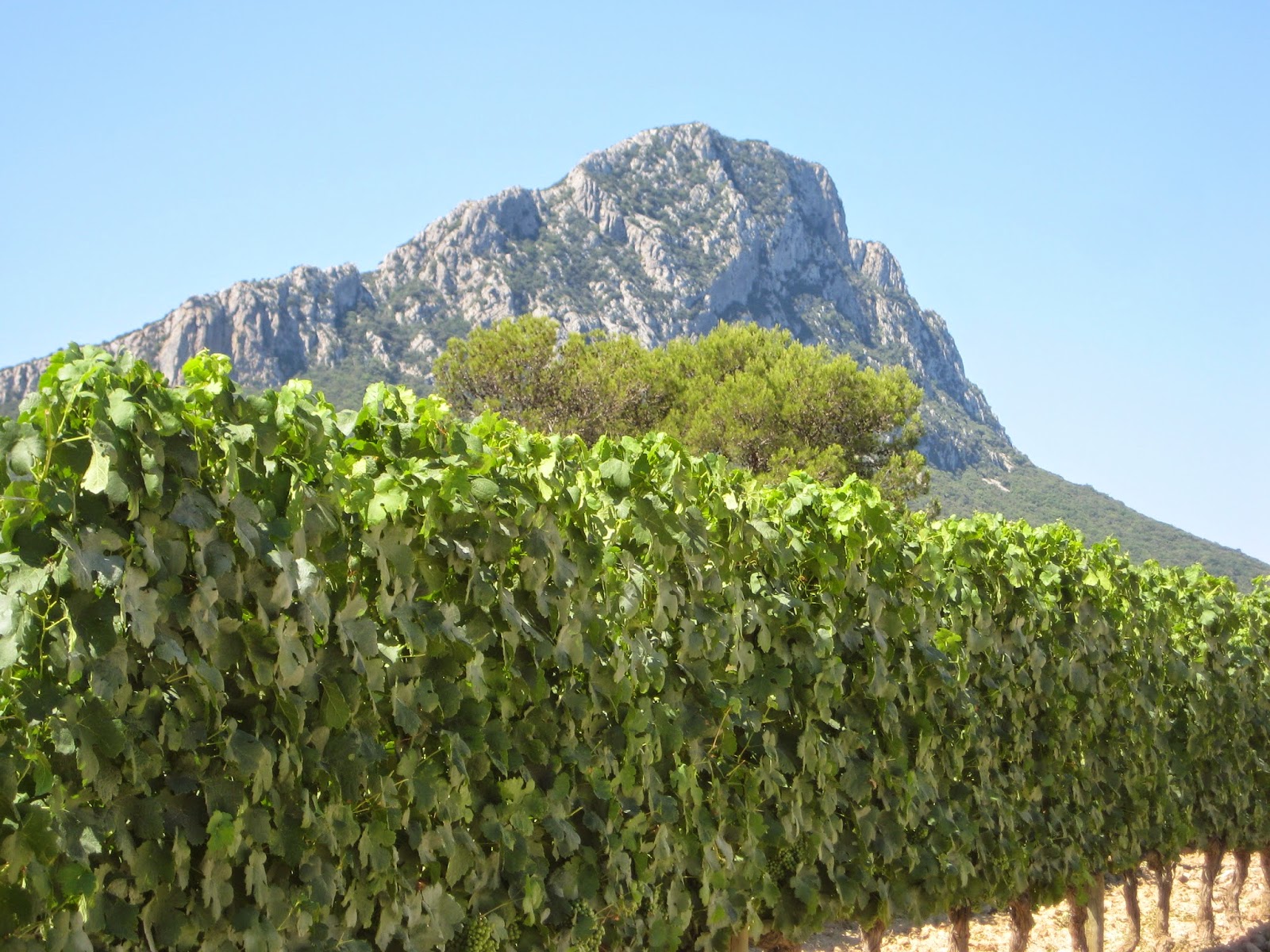 Next stop was la Bergerie du Capucin, to see Guillaume Viau, who is president of the syndicat of the Pic St. Loup.  However we were there to taste his wines, rather than to discuss local wine politics.  He explained that the vineyards come from this wife’s family.  A great great grandmother had been a sheep farmer,  hence the name of the estate.  His father-in-law had bought the vines in 1970s, and sent his grapes to the coop.   Guillaume began working with him in 1995, and until 2008 they were members of the coop.  But the coop in St. Mathieu is sufficiently imaginative not to insist on a total commitment of vineyards, so Guillaume was able to extract 12 hectares from the coop, while his father-in-law continued to send them his grapes. 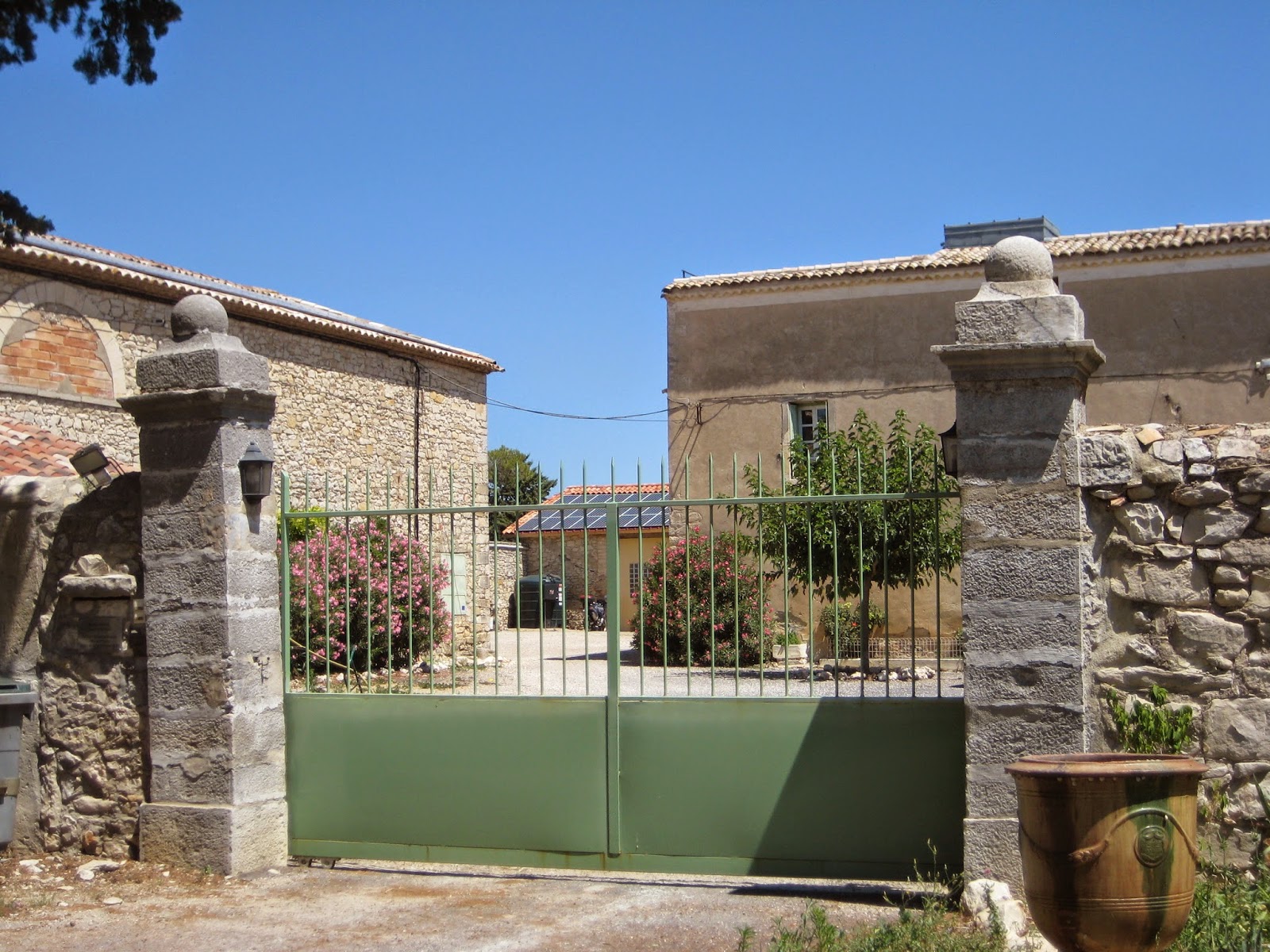 It is an attractive spot, a typical Languedocien farm, with a maison de maître dominating the courtyard, and farm buildings and stables around the courtyard.   Guillaume has a  tiny cramped cellar; he does a lot of things outside.  He has resin vats for his red wines and two insulated stainless steel vats for his whites and rosé.  Altogether he produces 5500 bottles.    Guillaume explained how he was studying science at Montpellier and came here to do a vintage, as a holiday job, and met his wife and stayed.

Interestingly he has one hectare of Cabernet Sauvignon that goes to the coop.  There are plots within the appellation area  that are non-appellation land and those are planted for vin de pays.   And the area has a strong tradition of coops that work well for their appellation, notably at St. Mathieu de Treviers – I remember being impressed on a visit there as far back as 1987 – and at Corconne.  Jacques Gravegeal who is president of the syndicat of the Pays d’Oc also has vines in Pic St. Loup.

Guillaume talked about his work;  he has practiced lutte raisonnée since 2001.   In the cellar he favours macerations of two to three weeks.  And then he began opening bottles. 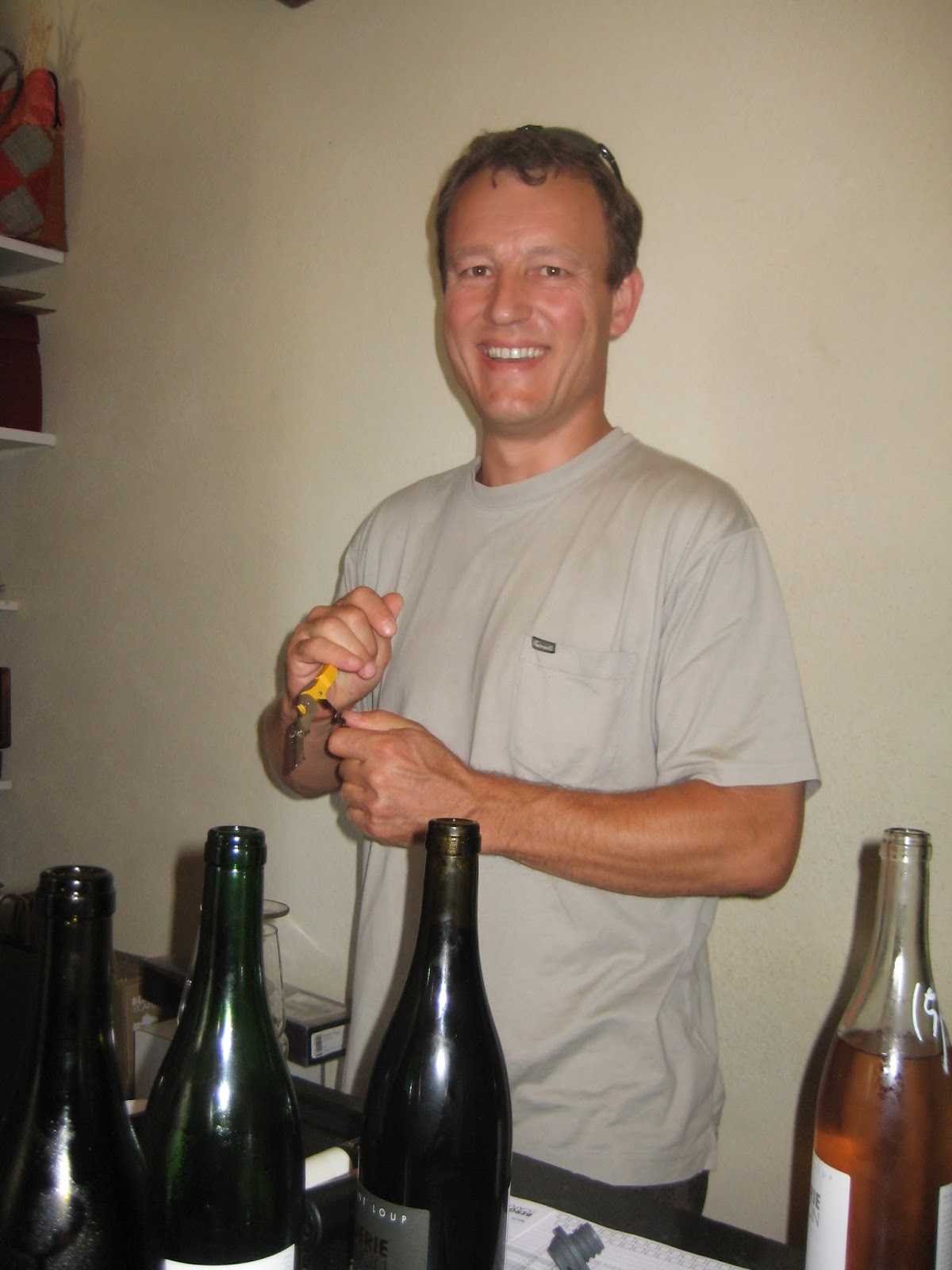 2013 Les 100 Pas, Pays d’Oc – 7.00€
A pure Chardonnay.   Élevage in vat.  Light colour.  Fresh and delicate with good acidity.   Not all bad for a Languedoc Chardonnay.  Guillaume explained that it comes from a cool vineyard at Valflaunès, with the vines grown on rich soil, and facing north, and protected from the south by a small hill.   There is a lot of Chardonnay planted  within the Pic St. Loup, as well as more traditional Languedoc varieties.  Guillaume talked about the delimitation;  the area is delimited, so that a village is recognised as part of the appellation, and then within that village a délimitation parcellaire is made, with strict criteria, technical, geological and microclimate.  This means that within a Pic St. Loup village, there are plots that are not appellation, but vin de pays and therefore planted with vin de pays varieties, such as Chardonnay.

2013 Dame Jeanne, Val de Montferrand - 9.80€
80% Chardonnay with 20% Viognier.   There is more to this wine than the previous Chardonnay.  For a start there are two different types of Chardonnays; one is picked earlier to retain its acidity and freshness.  The second is picked four to eight days later so that it has more weight.   For this wine the Chardonnay and Viognier are aged separately in vat and then blended.  The Viognier adds richness and seemed to dominate the palate.  Guillaume admitted that Viognier is difficult in a blend  and he thinks that he has added too much.  The method of vinification is very simple: press; débourbage and ferment around  15⁰C for three weeks; élevage in vat and blend in the spring, before bottling.

2013 Dame Jeanne rosé, Pic St. Loup – 9.50€ Quite a pale orange pink.  Light fresh fruit medium weight and rounded palate, with a dry finish and good balance.  Delicate and fresh.  Jeanne was the sheep farmer, so it is fitting that her name lives on, as an inspiration in the estate

Then the conversation moved on to percentages of grape varieties and the rules for Pic St. Loup.  Syrah, Grenache and Mourvèdre are the principal grape varieties and must make up at least 90% of the blend, while Carignan and Cinsaut are complimentary varieties, for which the maximum percentage of both together is just 10%.  There is no precise percentage for the principal varieties, but no one principal variety must account for more than 80% of the blend.   And you must include at least two principal varieties.  Syrah tends to be the dominant variety as it performs so well in the cooler climate of the Pic St. Loup.  Élevage is a minimum of twelve months, including two months in bottle, so the 2013 vintage can be sold from 1st September 2014.  This means that you have to stock the wine in bottle within the appellation, which creates what Guillaume called a garde feu or a firebreak or security barrier.

2011 Larmanela – 19.80€
Named after the lieu dit opposite the original bergerie.  There are still sheep up there, with a shepherd who rents it from Guillaume’s father –in-law.  Monoculture is relatively recent in the Languedoc.  100 years ago vines were planted in poor soil; wheat in richer soil and the garrigues were used for grazing sheep for meat and Roquefort cheese.  The blend here is 90% Syrah with some Grenache, from a selection of plots.including some old vines at Lauret, giving a low yield of 15 hl/ha.  There is an 16-18 months élevage in 400 litre barrels.  Guillaume vinifies each plot separately and puts it in wood until the spring; then blends it and puts into mainly new barrels.   The oak was still very present, but some rich fruit and notes of vanilla and quite sold tannins.  He then produced a second bottle opened a day or two earlier.  It had become more tapenade with black fruit and less obvious vanilla. 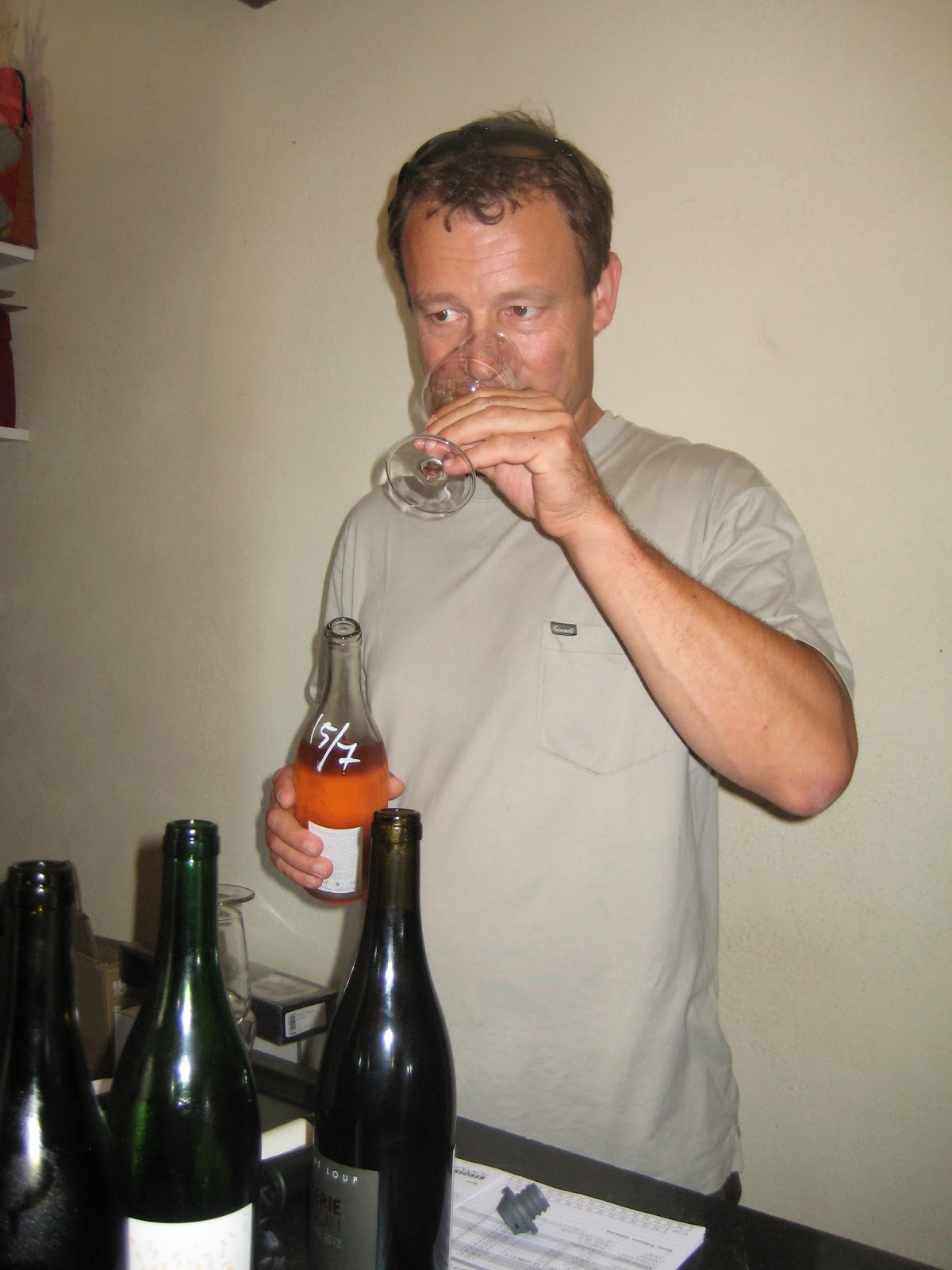 Now how about an older vintage or two?  An invitation that I can never refuse.
2011 Dame Jeanne.  Good colour.  Elegant fruit.  Red fruit with a smoky note and the benchmark freshness of the Pic St. Loup.  Some gentle evolution and an elegant finish.  A lovely glass of wine.

2008, which was actually Guillaume's first vintage.  At this stage he had done a winemaking course, but this was his first actual vintage.   He did a lot of pigeage, too much he thinks.  The colour beginning to evolve.  Very black fruit.  Tapenade, solid fruit and solid tannins.  Some prunes; pruneaux sounds better in French.    A fascinating evolution.   In fact it was lovely to observe how Guillaume’s winemaking has evolved, and that now he favours and achieves elegance.

And then it was time for lunch, at a very cheerful restaurant, le Bistrot du Vinaigrette in Prades-de-Lez just north of Montpellier.    We sat in a shaded courtyard outside and enjoyed a fresh rosé from Château la Roque, and a salade gourmande.    I was a little disappointed by the last cellar visit of the day, so would prefer not to blog about it.  Instead I shall remember  the wonderful drive back along the foot of the Pic St. Loup. 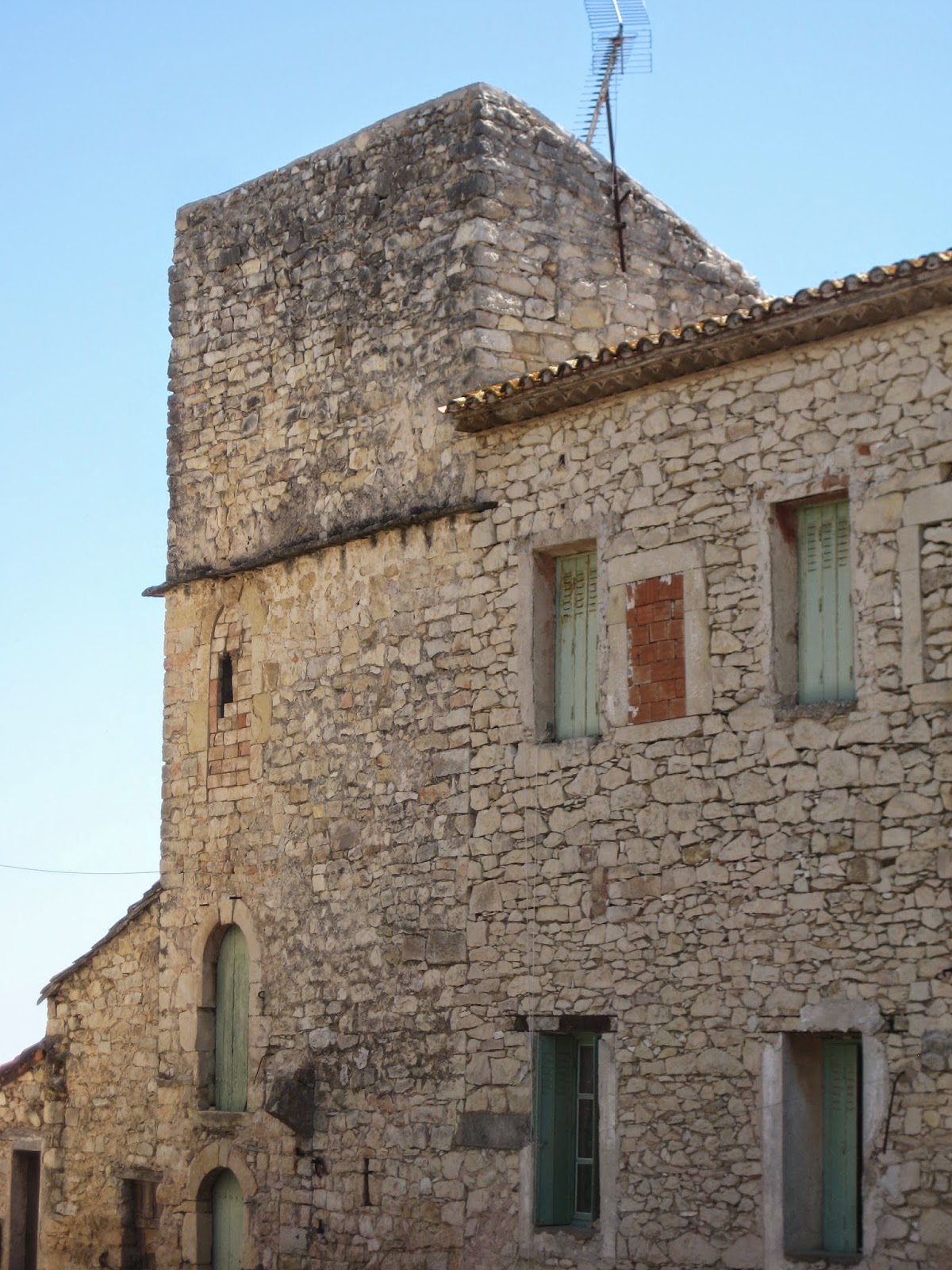