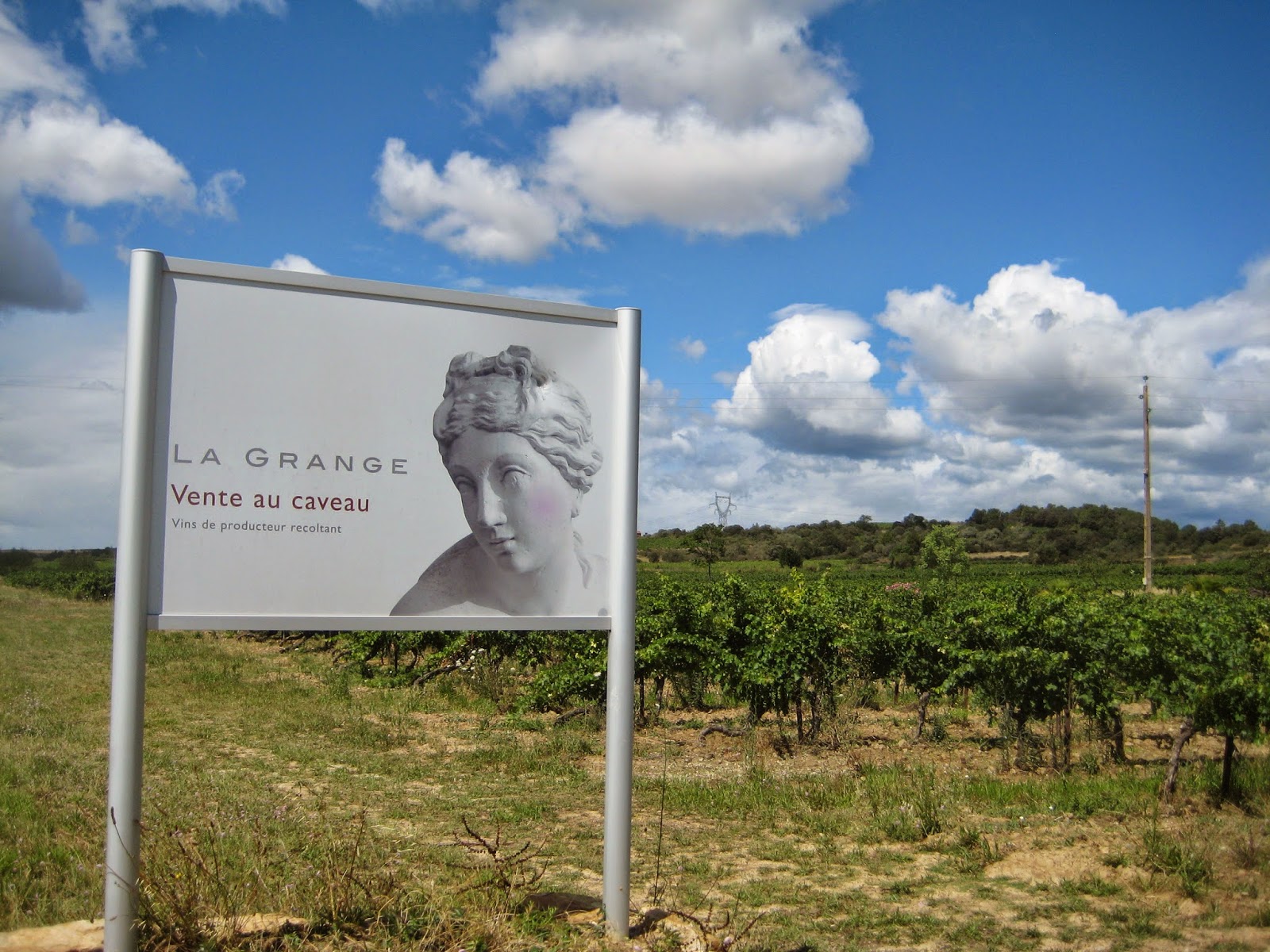 Domaine la Grange is yet another example of outside investment in the Languedoc.   The property was bought in 2007 by Rolf Freund, who already had a successful business in Germany as a wine shipper.   The previous owner has stayed on as chef de culture, relieved that he no longer has full responsibility for a family estate.  And in Mr. Freund’s absence the estate is capably managed by Sandrina Hugueux.     You will find it on the road out of Gabian going towards Fouzilhon.  Currently a large crane marks the site, for a new cellar is under construction, but will not be ready until October, just too late for this year’s harvest.   And they have recently changed wine makers.  I tasted wines made by Sebastien Louge, who has moved on to create his own estate in Faugères, where he will make his first wines this coming vintage.  He has been replaced by Thomas Raynaud, who has an impressive CV and has worked largely in Roussillon at Domaine Lafage.

Altogether Domaine la Grange comprises  32 hectares, half in appellation Languedoc or Pézenas, and half Pays d’Oc, divided into about 25  different plots..  The soil is quite varied, un peu de tout, as Sandrina said.  There are extinct volcanos close by, and plenty of underground water, so their vines do not suffer from any water stress.   This is the area that supplied water to the Roman city Betarra or Baeterrae, as  Beziers was then called.   In the same plot of vines you have red and yellow soil, limestone and clay, basalt and even a little schist for they are on the edge of the appellation of Faugères.  There is some Carignan from 1956; Cabernet Sauvignon was planted in the 1980s, and they have other international grape varieties, especially Sauvignon and Chardonnay for white wines.   In the vineyard they follow the principles of lutte raisonnée with a minimum of products, and are members of Terra Vitis.   The key to lutte raisonnée is observation, rather than action, with minimal chemical intervention, using organic products wherever possible.

There are three levels to their range of wines.  Their entry level is Classique; then there are  five different varietal  Terroirs, based on different soils, and best of all is the Castalides range.  What follows is what I tasted.   They had sold out of the Reserve in the Castalides range – it had just been Parkerised!

Terroir 2013 Sauvignon - 5.95€
2013 is their first vintage of Sauvignon, from a two hectare plot that they have just bought.   The vineyard needs some work.   Pale colour delicate nose.  A touch of minerality and quite fresh with good acidity, but lacking a little in real flavour.  Next year they are aiming for a lower yield.

Terroir 2013 Chardonnay – 5.95€
Light colour. Quite a delicate nose.  Lightly rounded and buttery, with some acidity. Quite fresh and easy.   These vines were planted in 2007.

Classique 2013 Rosé  - 5.50€
Mainly Cinsaut with some Syrah.  Saigné.  Pale colour.  Quite a rounded nose.  Quite ripe with a touch of spice.  Quite vinous with a touch of sugar on the finish, in fact 7 gms/l, just to soften it.  I found it went slightly cloying.  It is intended for the German market.

2013 Classique Rouge
A blend of Syrah and Mourvèdre.  Young colour.  Medium depth.  Quite soft red fruit, soft and rounded with a streak of tannin, and again a touch of residual sugar, 6 gms/l, to make for easy drinking.

I didn’t  taste the Classique Blanc as that comes from bought in grapes, and is a blend of Chardonnay and Sauvignon.

Terroir Cabernet Sauvignon 2013 Pabiro – 8.95€
Pabrio is the name of the vineyard.  Élevage in vat.  Deep colour.  Quite a rounded nose with a touch of cassis.   Quite a rounded wine, with a ripe finish and soft tannins, and a streak of freshness, characteristic of the vintage.

Terroir 2013 Merlot – 8.95€
From both new and old vines.  Élevage in vat.  Good colour. Quite a firm nose, with firm fruit on the palate and some dry cassis.  Not my favourite grape variety from the Midi, but this successfully avoids the common fault among Merlots from the Midi of jamminess.

Les Vins Castalides, 2012 Edition, Pézenas – 14.90€
I needed to be told that Castalides were water nymphs, who lived in a well, and inspired a poet who drank the water from that well.  We are of course meant to be inspired by the wine.  It is a selection of the best plots of Syrah and Grenache on slopes at 250 metres.   Each plot is vinified and aged separately.  They favour several different coopers, Seguin Moreau, Boutes and François Frères amongst others.   Deep colour.  Quite ripe dense solid oak on the nose.  A firm oaky streak on the palate, balanced with a very good concentration of fruit.  Good length.  An explosion of flavour in the mouth, rich and tannic with black fruit, tapenade and garrigues and chocolate on the finish.  Lots of character.   I’d love to try it again when it is ten years old.

Sandrina talked about how their work has evolved in the vineyard.  The former owner accepts their ideas and since 2007 they have really focussed on the vineyard, reducing yields.  The palissage has changed; canopy management has improved and they analysed the soil carefully before any replanting.  Mr. Freund may be an absentee owner, but he does visit every six weeks or so.

2012 Icône, Pézenas    – 26.90€
Equal parts of Syrah and Mourvèdre.  The best Mourvèdre they have, and Syrah is grown on a slope – most of their vineyards are on undulating rather than steep slopes.  The wine spends 18 months in oak.  Good deep colour.  A touch of oak on the nose, but fresher spice than for Edition.  More structured.  Rounded and ripe, with notes of tapenade from the Syrah, while the Mourvèdre gives backbone and notes of the garrigues.   Sandrina observed that Mr. Freund likes concentrated wines.  The fruit must dominate the flavour, not the wood, and there must be some freshness too.  And she summed up the style of the wines of La Grange, by describing them as modern wines, with fruit.      They certainly illustrate some of the current trends of the Midi. 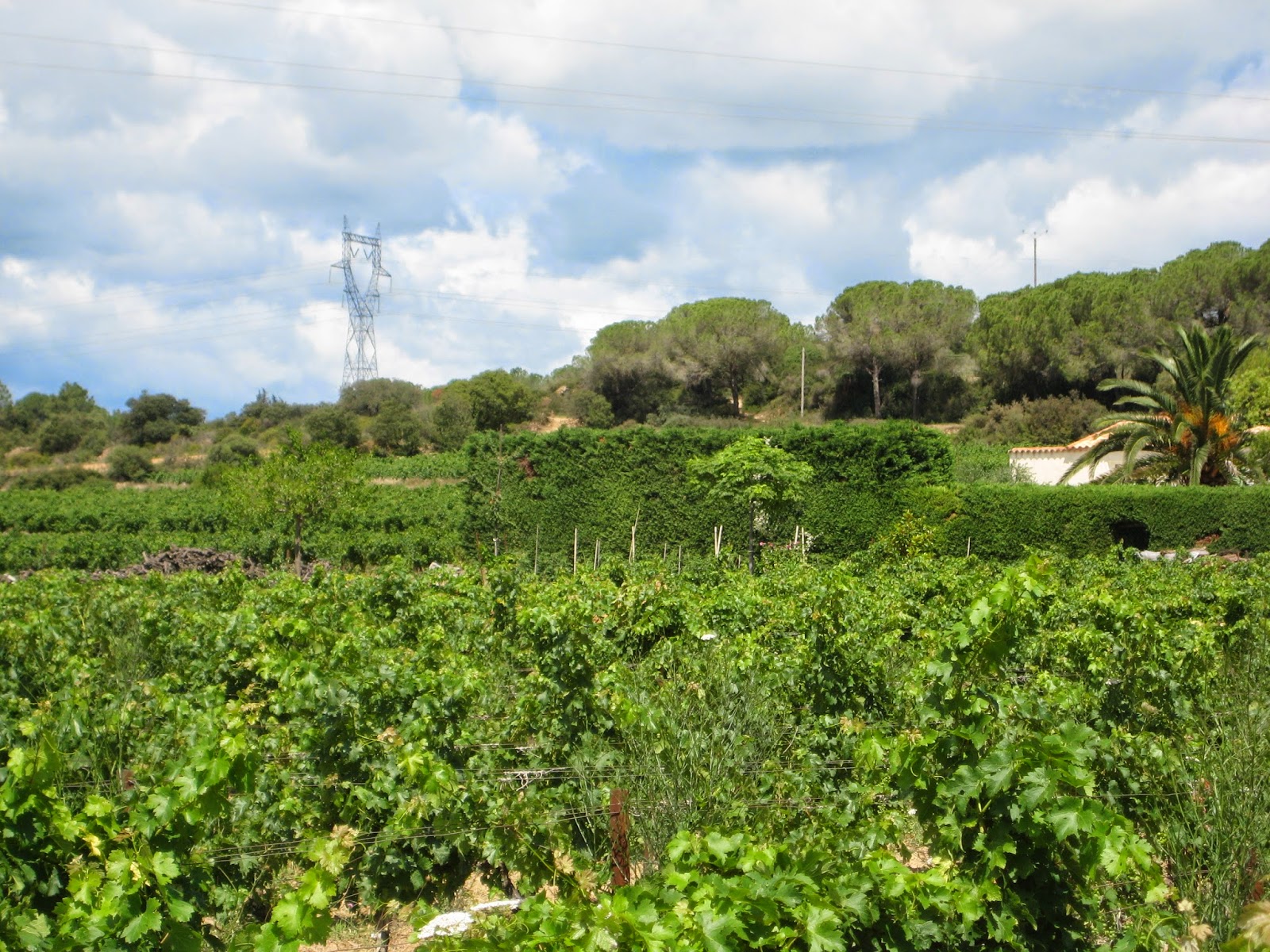