Clos de l'Anhel in the Corbières 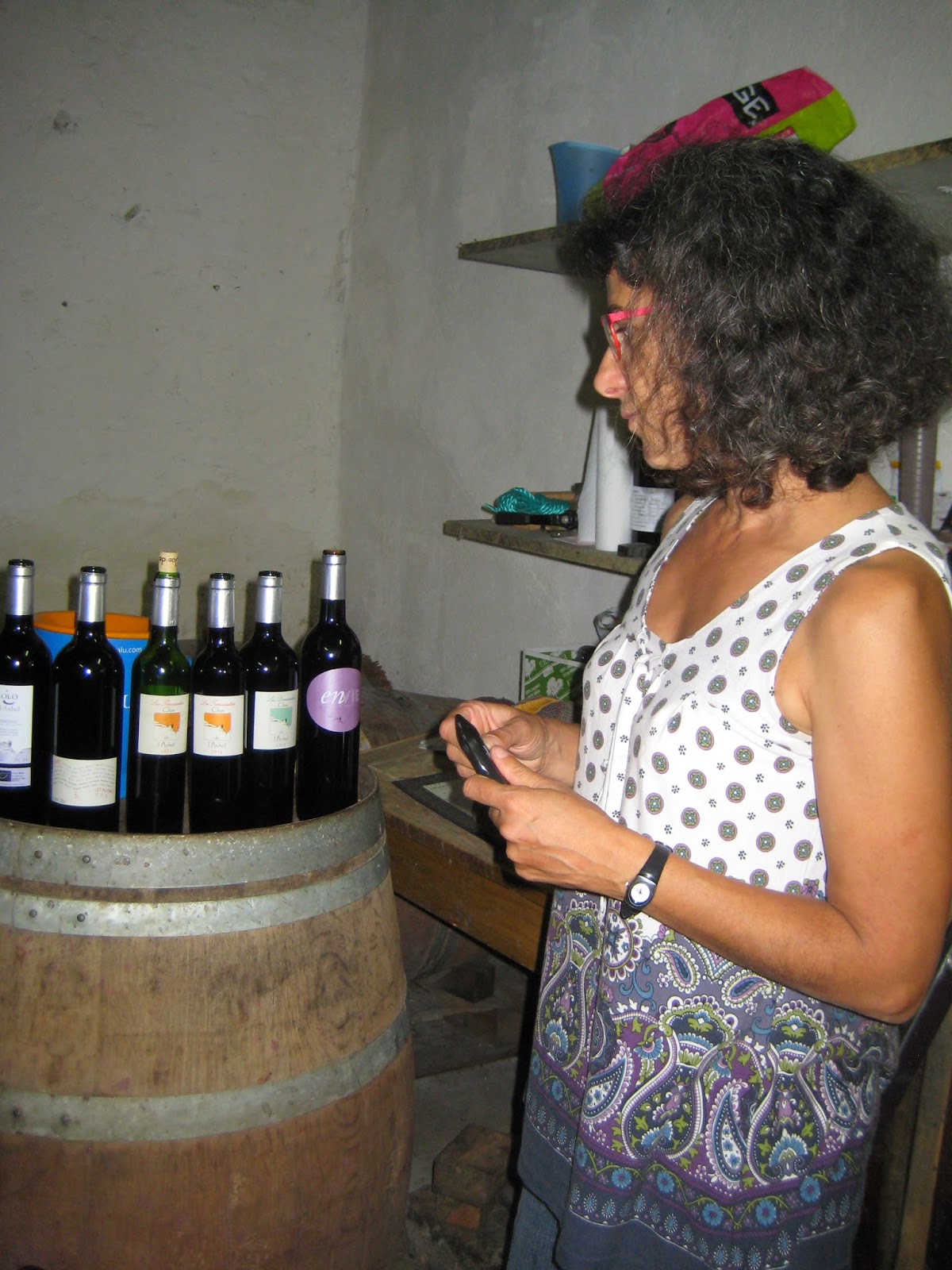 The heavens opened just as we reached the little village of Montlaur and the narrow streets quickly turned to gushing streams.  I’ve never seen quite so much water fall out  of the sky  quite so quickly.    Finding Sophie Guiraudon’s cellar was not easy.   Montlaur seems to economise on street signs, and Sophie on cellar signs.  But eventually we tracked her down, and it proved well worth persevering.

Sophie was reflective about the rain.  It was not forecast and she was planning to pick later in the week.   It will all depend on the weather over the next three days.  If things dry up and the sun comes up, all will be well.

She talked about the creation of Clos de l’Anhel, with Philippe Mathias.  Their first vintage at Clos l’Anhel was 2000. He was and still is the manager or régisseur at Château Pech Latt, a nearby Corbières estate, but is no longer involved with Clos de l’Anhel.  They took over six hectares from a coop member, with vines in the villages of Ribaute and Lagrasse, and converted them to organic viticulture.  Sophie’s first solo vintage was in 2009 and she now has nine hectares.  She studied oenology at Toulouse, and worked at the Dubernet laboratory in Narbonne, but she really wanted to do her own thing, to follow the entire viticultural cycle, and in the cellar, and not have a boss.  For the moment she only has red grape varieties, and will have made her first rosé this year, in 2014.

Our tasting began with 2013 Cuvée les Autres,  Vin de France - 7.70€  a wine that was created in 2007, to thank friends, whose names are on the label.  Each name has a story.   The grapes, half Syrah and half Grenache, from forty years old vines, are from her newer vineyards that are being converted to organic viticulture.  Élevage in vat.    Good colour.  Red fruit and understated spice.  Some liquorice and leather.  Quite a firm palate; quite sturdy and ripe, with youthful tannins.   Immediately appealing fruit on the palate.  Sophie called it a vin de copain.  Low yields, less than 30 hls/ha.
Sophie talked of the vagaries of the weather.  Last year, 2013, on 15th September, the grapes were looking magnificent, but were not quite ripe, and then the vent Marin, blew in from the sea, bringing a week of sea mist, and 60 mms of rain. The result was botrytis and the need for a severe triage, à la main, resulting in her losing 30% of her crop.  She eventually started the harvest on  1st  October 2013, and finished on 10th.  This year she expected to start the harvest with her rosé on 7th October.

2013 Corbières, Lolo de l’Anhel  - 7.70€
I am always intrigued by wine names.  Lolo is the milk for a baby, and anhel is a  lamb or agneau. Sophie said she liked velours dans la bouche, velvet in the mouth, and sometimes finds the tannins of Corbières a little rustic.  She wants elegant  tannins.   She keeps her  vin de presse  separate and does not mix it with the free run juice, so that all her pressed juice goes into Lolo, and there is none in her other wines.   Consequently Lolo is very perfumed and less elegant.  I found it quite solid and sturdy, with ripe fruit and fresh tannins, and some youthful acidity; ‘the character of pressed wine’,  observed Sophie.

She talked about a technique for extracting juice from the cap, using mats for an olive press in several layers.  The circular press is sealed, and then the juice sucked out, aspiré over three or four hours, very gently
.
2012 Corbières, Les Terrassettes – 10.50€
This is her principal cuvée, mainly from Carignan, with Grenache and Syrah and a little Mourvèdre.  Deep young colour.  Quite firm sturdy fruit on the palate, with rich concentrated flavours.  Acidity as well as tannin and a long  finish.  It developed in glass, revealing fresh red fruit.  2012 was not a hot year and the vineyards are at a certain altitude, between 200 – 300 metres, which also helps retain the freshness.    The élevage is in vat; Sophie only uses wood for a Rancio.

2011 Corbières, les Terrassettes
‘Un beau millésime’, Sophie enthused.  More Syrah than in the 2012.  Quite rich and spicy, full and ripe, smoky.  Eight months in vat.  Much richer and more rounded than 2012.

2013 Corbières, les Dimanches – 15.50€
From 80 year old Carignan accounting for 80% of the wine. A small yield of just 20 hl /ha.   For this cuvée she uses the best wine of the year, and she might not make it every year.  Another year it might be Syrah, but she does like Carignan.  Good deep colour.  Quite a firm sturdy nose.  Very concentrated.  Youthful sturdy red fruit. Tannic with elegant concentration.  Nicely mouth filling. It used to be aged in barrel, but no longer.

2011 Envie  - 25.00€
90% Mourvèdre.  She had wanted to do a pure Mourvèdre.  Usually it ripens and goes into Terrassette, but 2011 was a particularly good year, so she wanted to do something different with the Mourvèdre, so added a little Carignan ad Syrah and made just 1000 bottles.  Deep young colour. .  Quite smoky; quite rich ripe fruit. Quite fleshy; youthful .  14˚

As  we drove through the dramatic gorges de Congoust at the southern foot of the Montagne d’Alaric , the clouds cleared, and we stopped for a quick look at Sophie’s vines outside Lagrasse.  She was going to make a more detailed inspection, while we headed into Lagrasse to admire the Roman bridge and the old market square. 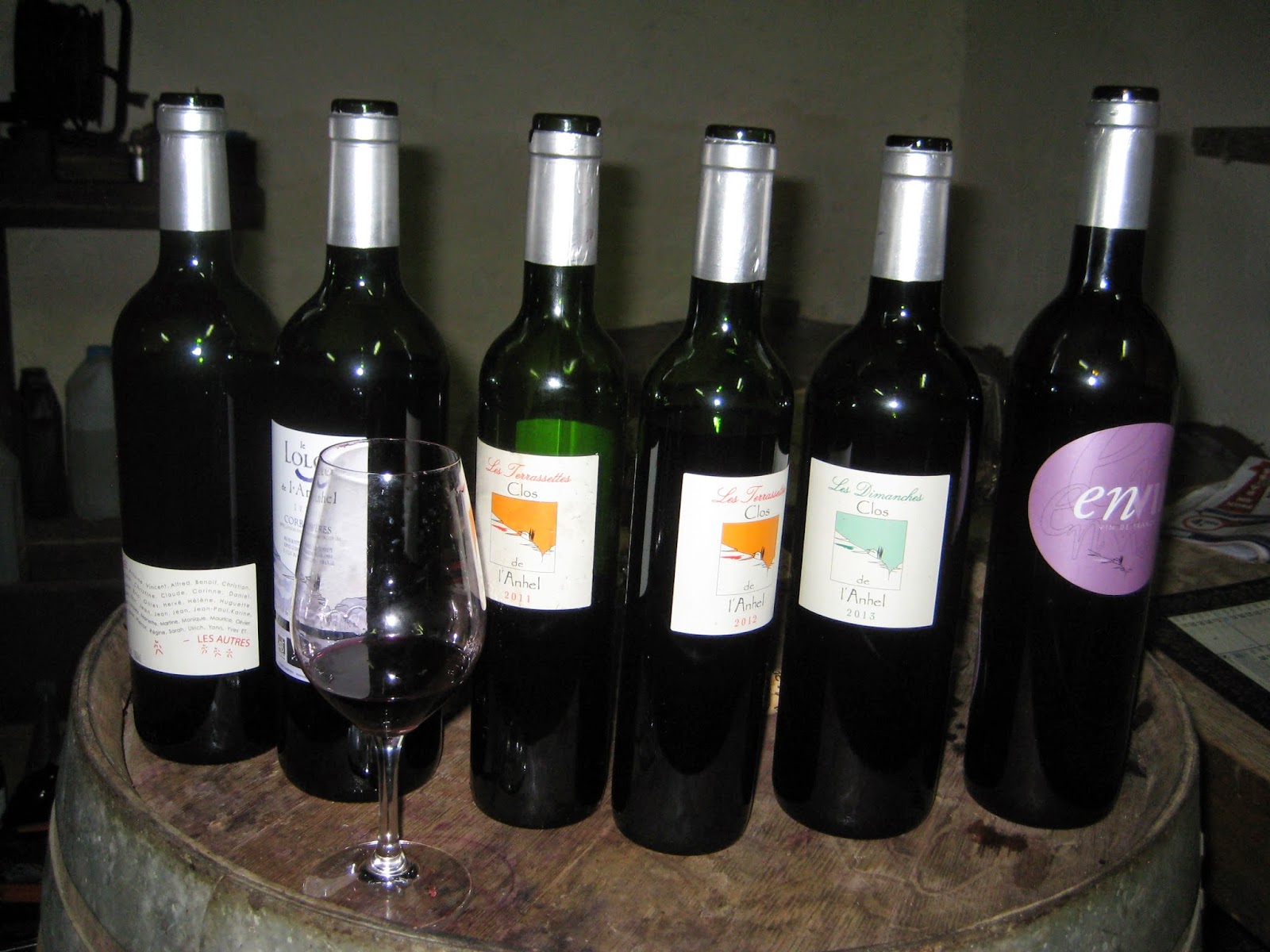 Alan March said…
Funnily enough I visited Pech Latt the other week and enjoyed the range of wines there. That with visits to other Corbieres producers suggested to me that the region is starting to see an new flow of winemakers who are improving the quality of wine. I will seek out Anhel from you recommendation though I must say I'd be reluctant to pay 25€ for a Corbieres.
17 November 2014 at 19:35