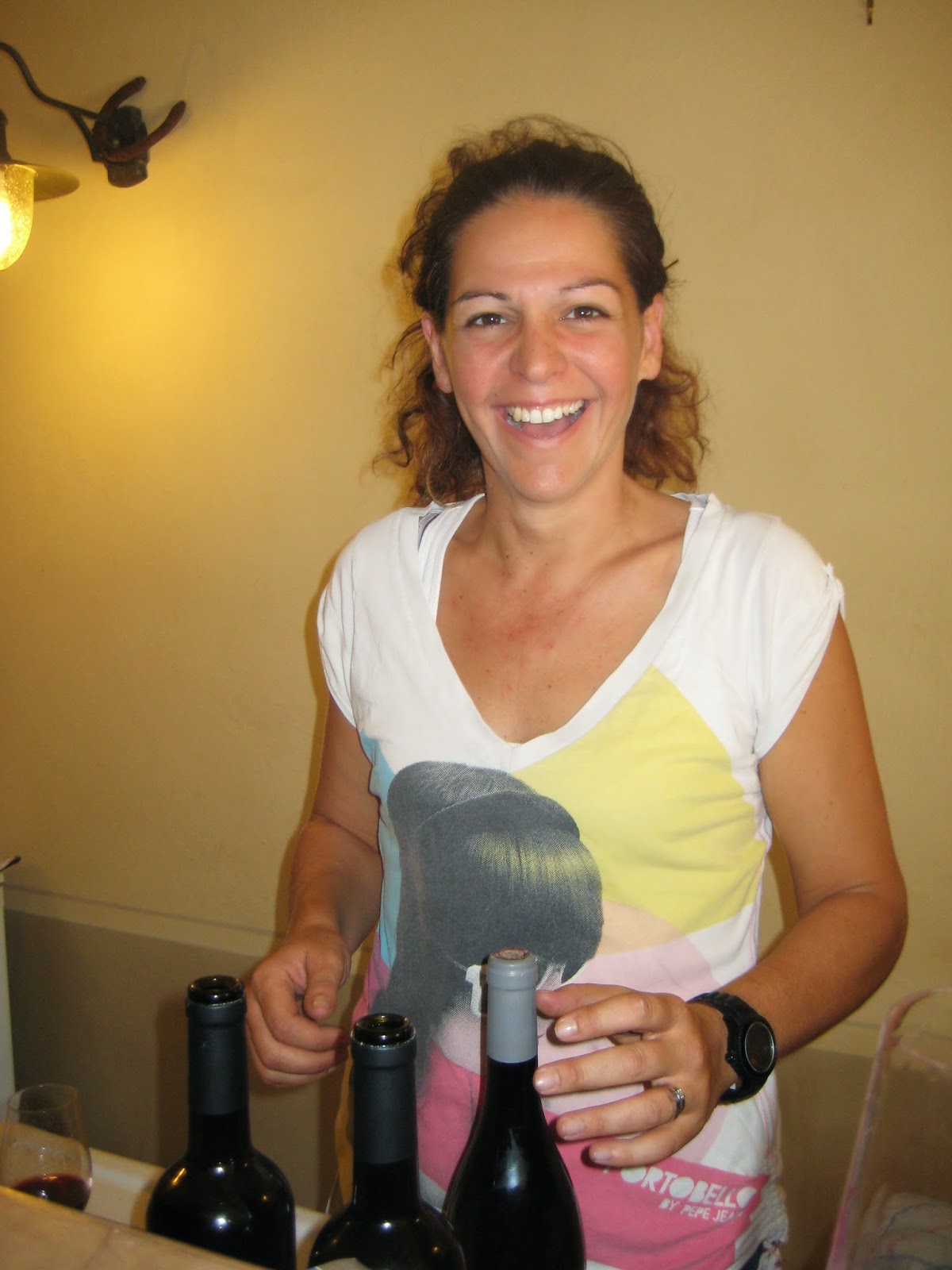 A chance encounter at Vinisud earlier this year.  I was just about to leave the fair for the airport as I passed the Domaine de la Garance stand and Pierre Quinonero waylaid me.  You must taste my neighbour’s wines.   He was so insistent that I could not possibly refused, and I was so glad that I didn’t,  as I really enjoyed discovering the wines of Domaine de Fabrègues. Obviously wine fairs are not the best places to taste properly, so I promised to visit, and finally did, with impeccable timing in the middle of the harvest.  Carine Pichot was laughing that the Nouvelle Observateur had described her the previous week as the tornado of Aspiran, and her prowess with a VTT certainly displayed tornedo qualities.  But more to the point, you sense that she is someone with a very firm sense of purpose, and commitment.

She talked about how she arrived at this estate in the Languedoc, between the villages of Aspiran and Péret.  She was brought up in St. Etienne – the nearest vineyards are the Côtes de Forez and the family business was a butchers.  She did business studies in Montpellier, and then went to Paris where she met ‘mon moitié’, her other half,  Sébastien,  who is the grandson of a champenois, but there are no longer vines in the family.  In 2004, Sebastien started Domaines les Verrières in  Montagnac, with two friends, including with Olivier Gros, a fellow rugby enthusiast who used to be  the wine maker at Château Lascombes in Bordeaux. They bought several parcels of vines.  Meanwhile Carine wanted to do her own thing.  Altogether she looked at some thirty different estates, going as far as La Clape, and with her father’s help, in December 2005, took over the rundown estate of Fabrègues, and learnt  the ropes working alongside the previous owner for a year.  He had sold all his wine to the négoce, but his son didn’t want to take over, and in any case had no idea how  to sell the wines.  The vines were generally in good condition, but Carine has pulled up some old Carignan, replacing it with Syrah and Grenache.  And now she wants to develop sales in bottle.

Altogether there are  40 hectares at Fabrègues, in Aspiran and Péret – some at Adissan are too far away and being sold - and Carine makes one cuvée per plot.  She plays with the blends afterwards.    I wondered about the meaning of Fabrègues, you encounter it in other wine names.  It may be a reference to a forge or forgeron, so a blacksmith for the pilgrims going to St. Jacques de Compostella.  And it can also mean fabrique, a stable.   Fabrègues was once a very large estate, with 250 hectares of land, and they have found a kiln for wine amphora. The soil is mainly clay and limestone, and once there was water here, for  they have found a lot of marine fossils.

There are several levels to the wine range.

2013 l’Orée blanc, Pays d'Oc– 6.00€
30% Grenache blanc – 70% Vermentino.  Light colour.  Carine looks for fresh easy fruit in this cuvée and that is just what she has achieved, with a light delicate nose, and a supple fruity palate with good acidity.  A straightforward white wine vinification

2013 Le Mas  Blanc– 10€
70% Grenache Blanc and 30% Vermentino.  One barrique of 30 hls in which the wine is kept for four to six months.  Skin contact for all the Grenache and for part of the Vermentino.  Light colour.   A touch of oak on the nose which fills out the mouth.  Lightly buttery and nicely mouth filling.

2012 le Moulin de Vissandre – 6.00€
A name used by the previous owner, and now their  entrée de gamme.  Grenache – Carignan. Vinification and élevage in vat.  Deep colour.  Quite a rugged note.  A little rustic.  Quite gutsy fruit.  A bit of tapenade, Medium weight.   Quite characterful.

2012 L’Orée Rouge, Pays d'Oc - 6.00€
Mourvèdre, Cinsaut and a little Syrah.  Carine aims to extract the maximum fruit.  Easy drinking.  ‘What our friends like’.  Red fruit, fresh and quite elegant.  A touch of peppery.  Rounded finish.  Chill lightly.  No wood – Karine insists that any oak has to bring something to the wine.

2011 Le Mas Rouge – 10€
60% Grenache, with Syrah and Carignan and 5% Cinsaut.  No wood.  Ripe rounded red fruit on the nose, and on the palate quite a youthful sturdy streak.  Grenache makes for rounded cherry flavour, while Syrah gives some cassis.  Refreshing tannins.  Quite full bodied with some ageing potential.  The vines are within the cru of Pézenas and so from the 2012 vintage Le Mas will be Pézenas.

And then we tasted the wines from Domaine les Verrières, where they only make red wine.
2009 Les 7 Fontaines,  Languedoc.  – 10.00€
45% Syrah, with 25% Grenache, 15% Carignan and 5% Cinsaut.  There were once seven springs  on the property.   Carine commented on the  three rugger players gradually becoming more elegant.  A small percentage of élevage in old wood to soften the tannins.  Quite a firm nose; quite rounded palate but quite solid and dense, with some tannin.   Ripe and rounded.

2010 les 7 Fontaines
Quite rounded, dense and chocolaty, and more gutsy on the palate than the 2009.  The effect of the vintage.  More sturdy with a tannic finish, and ripe fruit.  Needs time to tone down.

2009 Clos des Soutyères, Languedoc – 15.00€
Soutyères means sous terres. 70% Syrah with Grenache and Carignan.  Two years in wood; one third new.  Deep colour.  Quite solid and rounded ; dense ripe and robust.  Quite tannic with ripe fruit. And quite an alcoholic finish.

2008 Pierres Pentées – 20€
90% Syrah with 10% Grenache.  Two years in wood.  Handpicked and trié; the other wines are mostly mechanically harvested, except for the grapes for some experimental carbonic maceration, to see how it evolves.  This has very ripe Syrah, an explosion of flavours.  From the best plots, which promise some longevity.  A thought that carbonic maceration is no longer simply for early drinking.   Solid ripe and dense.  Perfumed fruit.  Orange notes on the nose.  Rounded and rich.  14˚

2013 L’Orée Rosé  - 6.00€
At the end of the tasting and now nicely chilled and refreshing. 70% Cinsaut with 15% Syrah and 15% Grenache.  All pressed.  Quite a light pink, with delicate fresh dry raspberry fruit.  Nicely balanced, fresh and juicy.

The harvest was in full swing so we didn’t see the cellar.  And projects for the future?   To get some continuity with customers on export market.  I sense that Carine has had some bad luck with bad payers on one or two markets.  And she would like to develop an haute de gamme, une pépite or nugget of really fine red wine.  It all promises well. 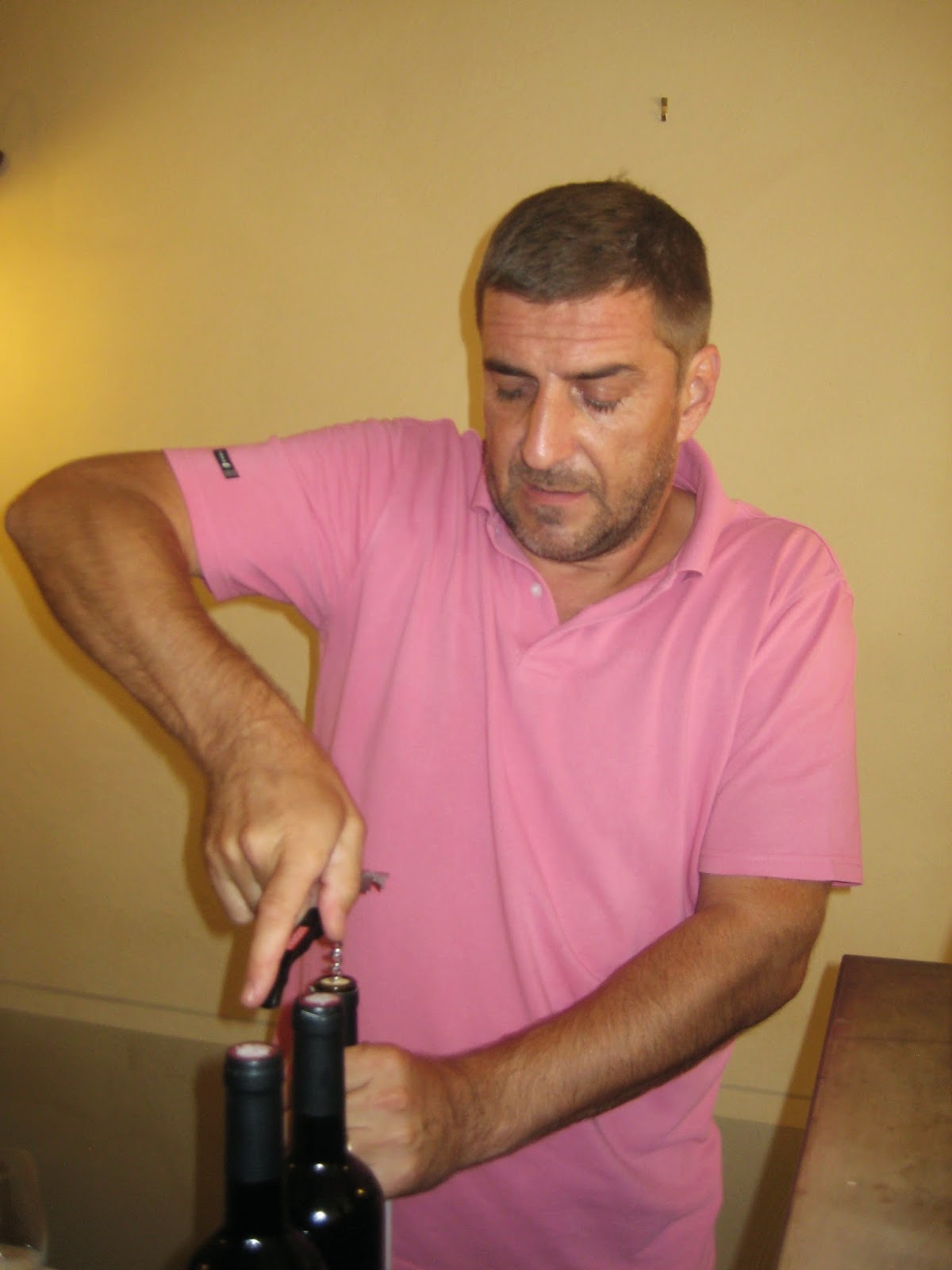