DWCC 2014 or the Digital Wine Communicators’ Conference in Montreux. 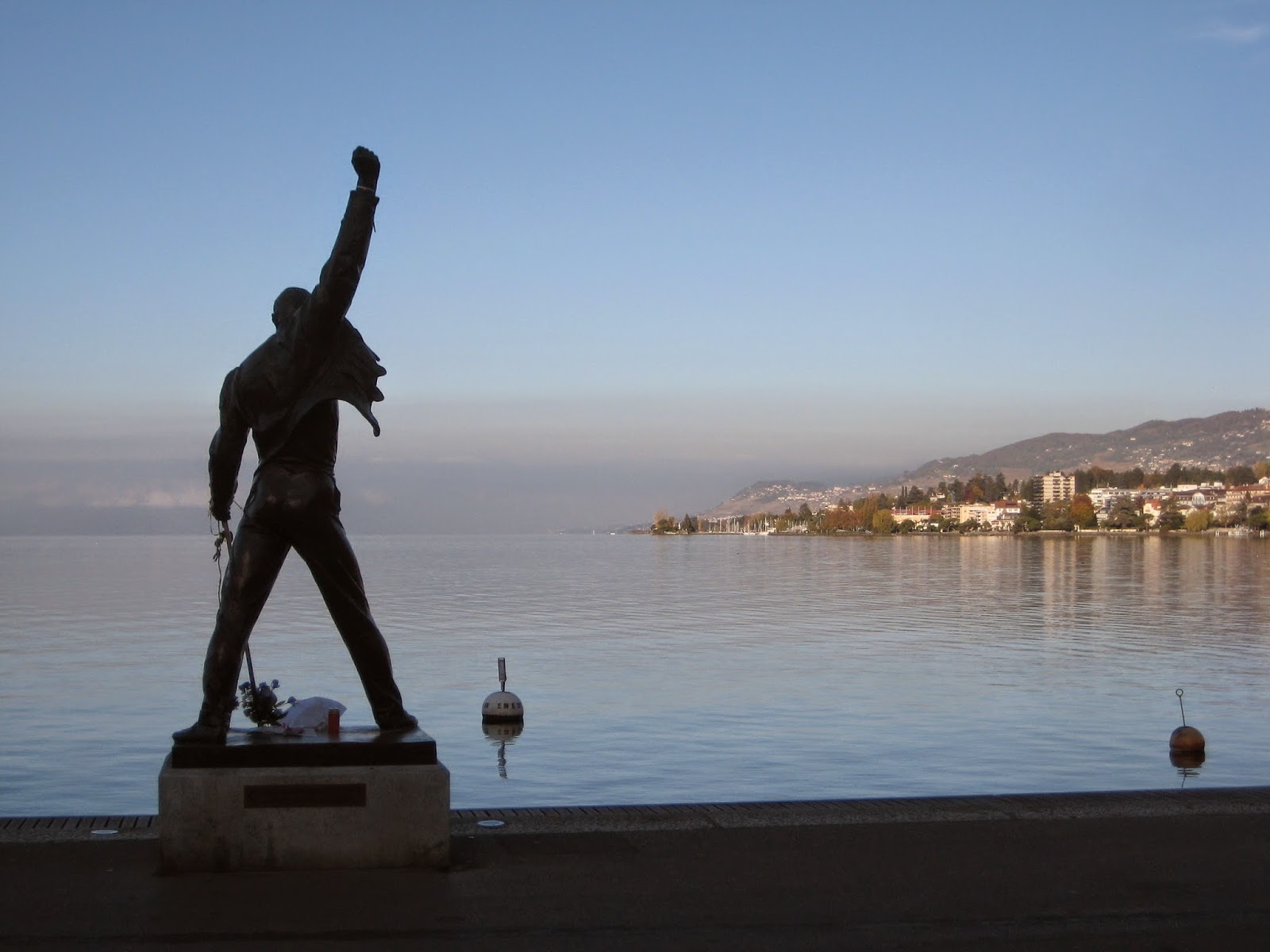 I am just back from the DWCC, or bloggers’ conference, as I still think of it.   And what a great time I had.   The venue in Montreux provided a wonderful opportunity for all sorts of tasting opportunities, including a total immersion in Swiss wines. I was also intrigued to visit Montreux again.  I was last there more years ago than I care to remember, on a family holiday, and it rained solidly for two whole weeks.   This time the sun shone brilliantly and the lake sparkled, making the morning walk to the conference centre past the statue of Freddy Mercurey a daily treat.

The conference kicked off with the traditional BYO evening.   Where else would you be able to taste / drink – fortunately there were plenty of spittoons - sherry, English sparkling wine, Switzerland, Sweden, Chablis, Minnesota, Germany, Hungary, Austria, Languedoc, Turkey, Oregon, Holland, Tokay, Châteauneuf-du-Pape, Palette and Priorat, all in one evening?  Sadly my contribution, not from the Languedoc for a change, but an Irancy from Clotilde Davenne of Domaine des Temps Perdus was corked .......

The next morning, while waiting for the first keynote speech from the inventor of Coravin, there were wines from Greece to try, including a cheerful sparkling rosé and some Malagousia.  Greg Lambrecht talked about the invention of Coravin.  And then there was more tasting, exploring flavour biases, with a series of wines that had been doctored, with oxygen, residual sugar, brett and TCA.  I didn’t like the bretty wines, but completely failed to recognise that the reason was brett, but the lowest TCA level was glaringly obvious for me. At lunchtime there were various Spanish wines to try, including a delicate Pazo Senorans Albariňo.   The afternoon sessions were dry, talking about wine communications and blogging.   But afterwards there were wines from Georgia on offer, with more weird and wonderful grape varieties, such as white Tsolikouri and Tsitsqua and red Aladasturi.  And there was also some splendid Carignan from Chile, rich powerful wines from old dried farmed vineyards, with old bush vines.

And in the evening to prove that no visit to Switzerland is complete without fondue, we were treated to just that in the old covered market of Montreux, with the additional entertainment of Swiss horns and cow bells, which did make conversation a trifle challenging at times.

The second day was rich with tasting opportunity.  Wine Mosaic kicked off with a tasting of almost lost grape varieties., such as Obeidy from the Lebanon,  Jadoga from Serbia, Areni from Armenia, Papakarasi from Turkey and several others, that I had never ever heard of, each presented by the wine grower responsible for its revival in each country.   And that was followed by a tasting of wines from Northern Greece, making for a highly enjoyable amble through the flavour profiles and appellations of that part of the country, with examples of Assyrtiko, Malagousia and plenty of Xinomavro.  I relived the Master of Wine trip of last year,

The afternoon was devoted to yet more tastings.  It began with Simon Woolf presenting wines out of context, to illustrate just how our perceptions can be influenced by circumstance, context and indeed a glimpse at the label.   It was a fascinating experience and my comfort zone was definitely challenged by an elderflower wine, not to mention some weird flavours from Sicily and Austria.

And then Switzerland came into its own, with several growers pouring their wines in a walk around tasting.  I enjoyed wines from Marie-Therese Chappaz and Vincent Chollet among others.  Then Jancis Robinson and Jose Vouillamoz, two of the three authors of the definitive tome, Wine Grapes,  conducted a tasting of Swiss wines, concentrating on examples of Chasselas, Petite Arvine, Pinot Noir and Merlot.  A 2002 Petite Arvine from Chateau Lichten in the Valais demonstrated just how well Petite Arvine can age, and the younger wines were delicious too. And the Pinot Noir flight provided a preview of the quality of that variety, that I would never have expected.  More anon in my next post on German Swiss wines.

That tasting was followed by a Masterclass from Jose of rare Swiss varietals, most of which I had never heard of, and for most of which the number of hectares in production is in single figures.  We had Rauschling (23 has);  Rèze (2.5 ha);  Humagne Blanche  (30 has); Completer (3 has between ten producers):   Plant Robert (7.5 has divided amongst 15 producers) and Lafnetscha (1.5 ha), amongst others.  There was not a vine among them that did not deserve a better recognition, and indeed later in the week Completer was promoted to the status of my new favourite grape variety.    And of course no conference is complete without a gala dinner, but that is the moment for drinking rather than tasting.  And the next morning saw a group of us setting off to discover the vineyards of German Switzerland, about which more anon.

You may of course wonder what all this has to do with the Languedoc.  The simple answer is: absolutely nothing at all.  Try as I may, I have failed to find any parallel or link between Switzerland and the Languedoc, other than the fact that the wines of Switzerland deserve to be much better known.   The problem lies partly with the Swiss who drink most of them themselves, and partly with the unavoidable fact that there is simply not enough to go around.  With just 15,000 hectares in production, export sales are negligible. 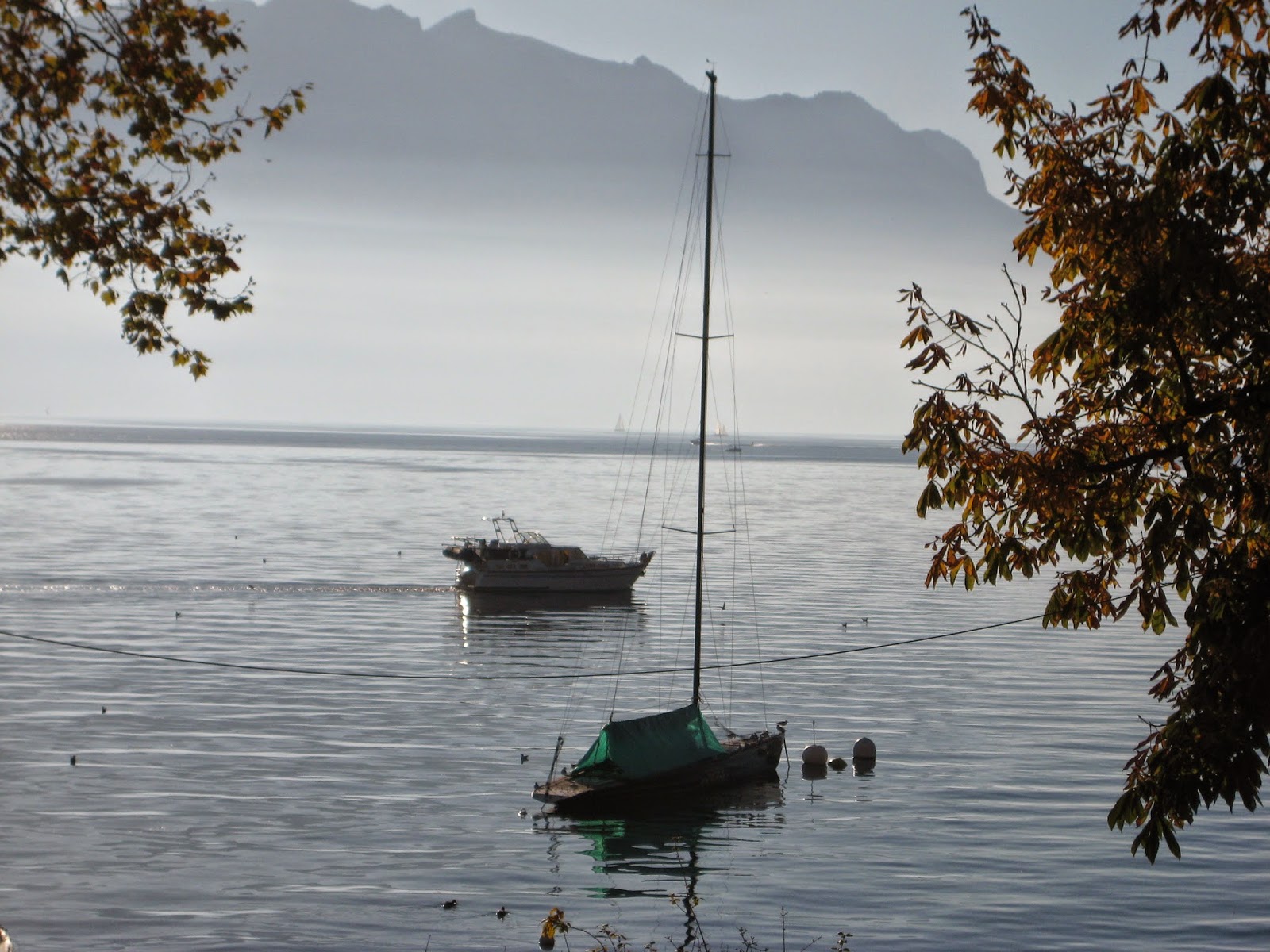 Anonymous said…
Hi Rosemary, the only link I can suggest between Languedoc and Switzerland is Petite Arvine... as championed by Swiss wine grower Hildegard Horat, at La Grange de Quatre Sous. How's that for a link, then? Yours, Louise
19 November 2014 at 19:43

Rosemary George MW said…
I should have thought of that - thank you. and Catherine Roque at Clovallon has some too in Les Aurieges
20 November 2014 at 13:07

Anonymous said…
Meanwhile, as of today, we have a new Swiss member of the Languedoc Outsiders group: Marcel Buhler of Domaine des Enfants (and his American partner Carrie Sumner). Don't think they grow any Petite Arvine, though... :-)
20 November 2014 at 13:29