Château de Cesseras in the Minervois 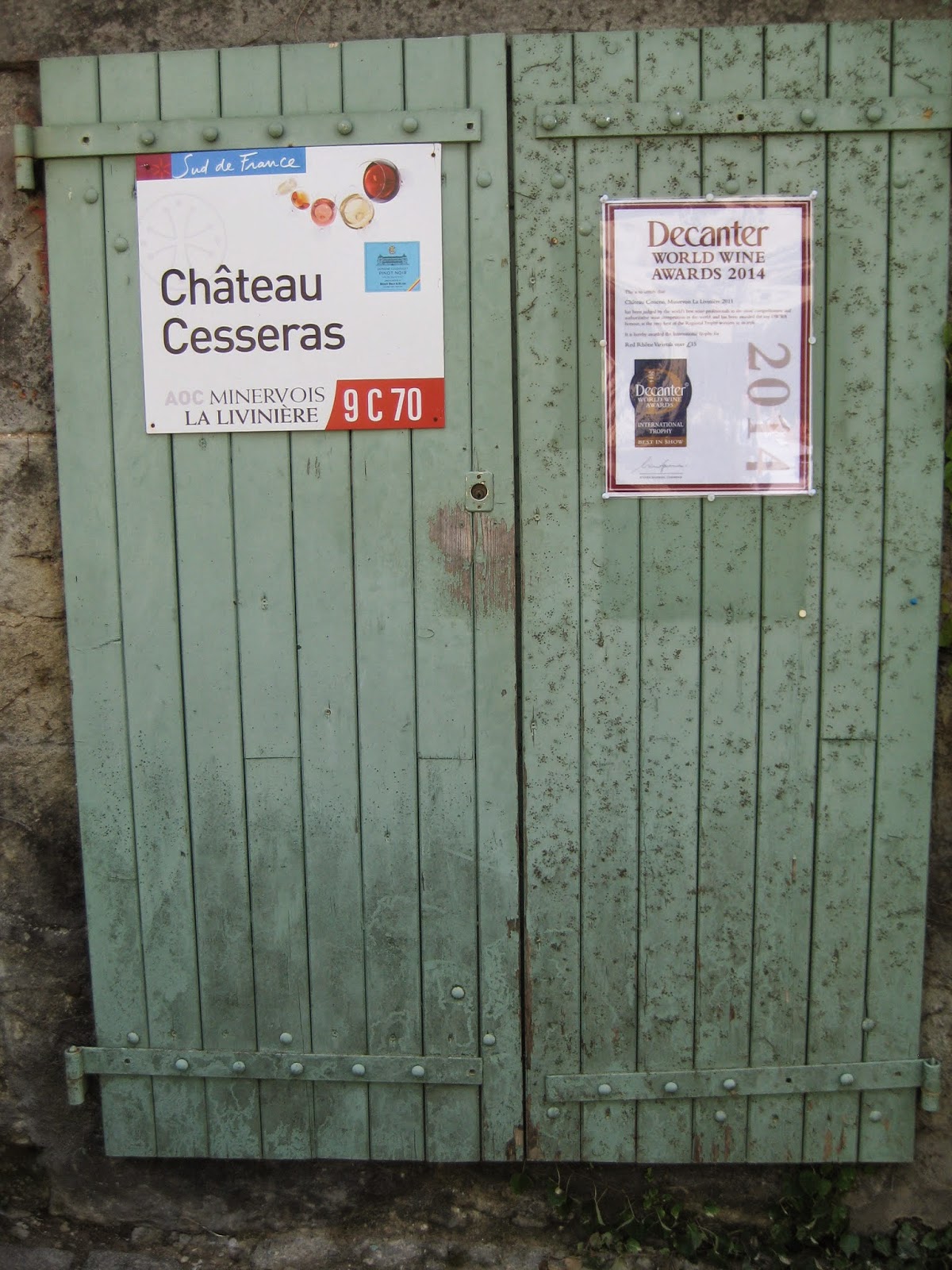 Château de Cesseras won the Rhône varietal trophy  in Decanter magazine’s world wine awards for 2014.  So I was curious to go and visit.   Pierre-Andre Ournac and his nephew Guillaume gave us a friendly welcome.  Their oenologist was just finishing checking the first wines of the vintage, Pinot Noir and Chardonnay, and they were looking good.

This is an old family estate.  Pierre-André is the 7th generation at Cesseras, but no wine was put in bottle until 1989.  Pierre André studied law, leaving his brother to run the property, and when he returned to Cesseras in 1989, they decided to take their vines, mainly Aramon and Carignan out of the coop at Azilanet.  80 hectares of vineyards have been replanted, with eighteen different cépages.  They have 18 hectares of Minervois la Livinière, planted with Carignan, Grenache, Mourvèdre and Syrah, but no Cinsaut, as they find it very sensitive to eutypiose.   And for vins de pays, they have some eight different varieties, with apologies for a list, but it illustrates the diversity of the Languedoc – Alicante Bouschet, Merlot, Cabernet Franc, Cabernet Sauvignon, Sangiovese, Petit Verdot, Marselan, Pinot Noir, Pinot Gris, Chardonnay, Viognier, Marsanne, Muscat à petits grain and Durif – phew!  Pierre-André had a bit of trouble remembering them all – I’m not surprised.    He uses Pays d’Oc rather than a more individual and localised vin de pays, for marketing reasons.  Viognier is particularly important, and he also talked about the commercial significance of Pinot Noir. 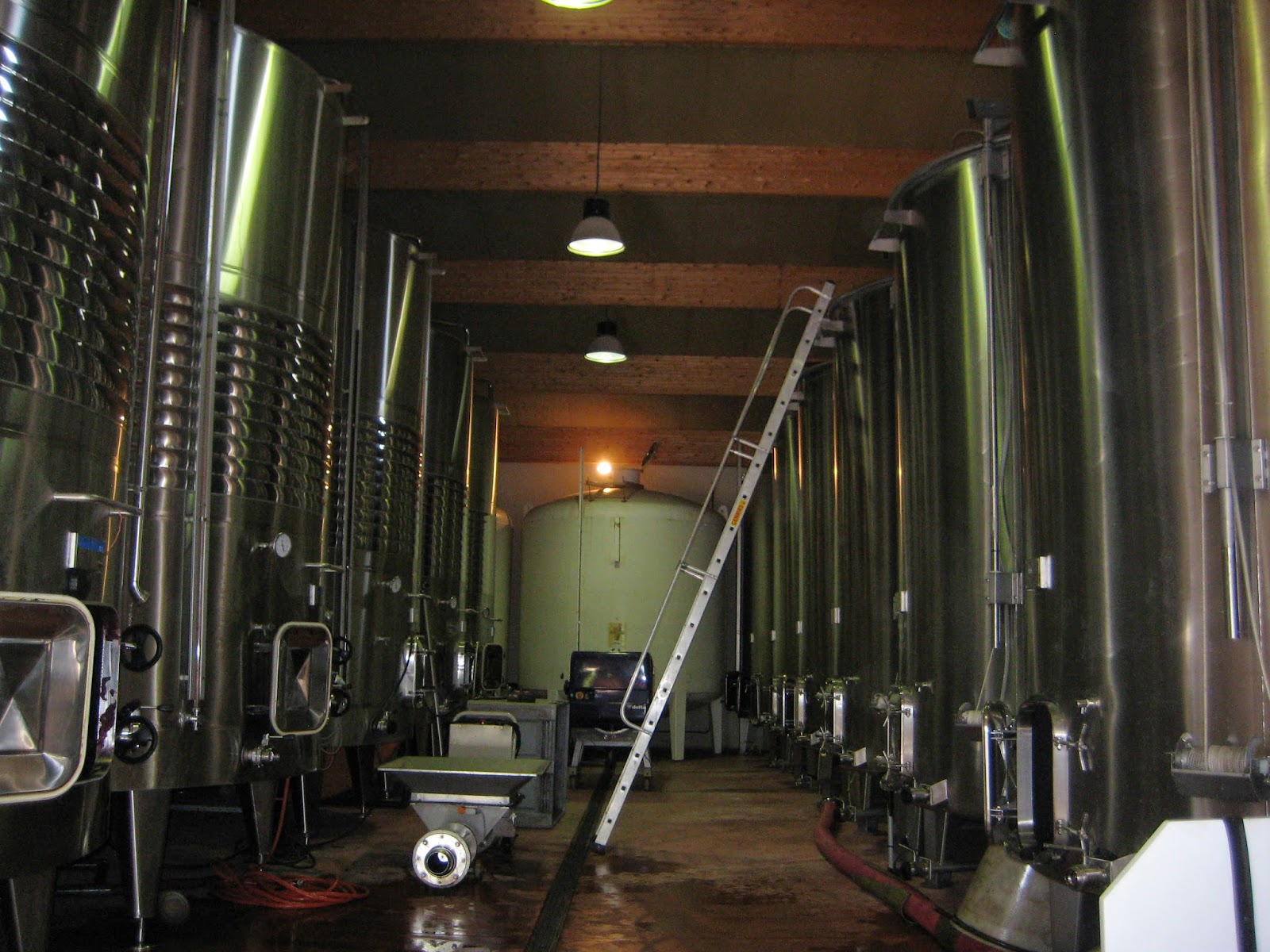 We had a look at the cellar – there are stainless steel vats and barrels from the Tonnelerie de Mercurey.  The vins de pays are sold under the name of Domaine Coudoulet and the Minervois under the Château de Cesseras label, as he uses the old cellars of the château for his barrels.   Coudoulet means galets roulées in Occitan.  Apparently the Perrin brothers of Château Beaucastel were not very happy about the name Coudoulet, but since its use in the region dates back to 1400, there was nothing they could do about it. 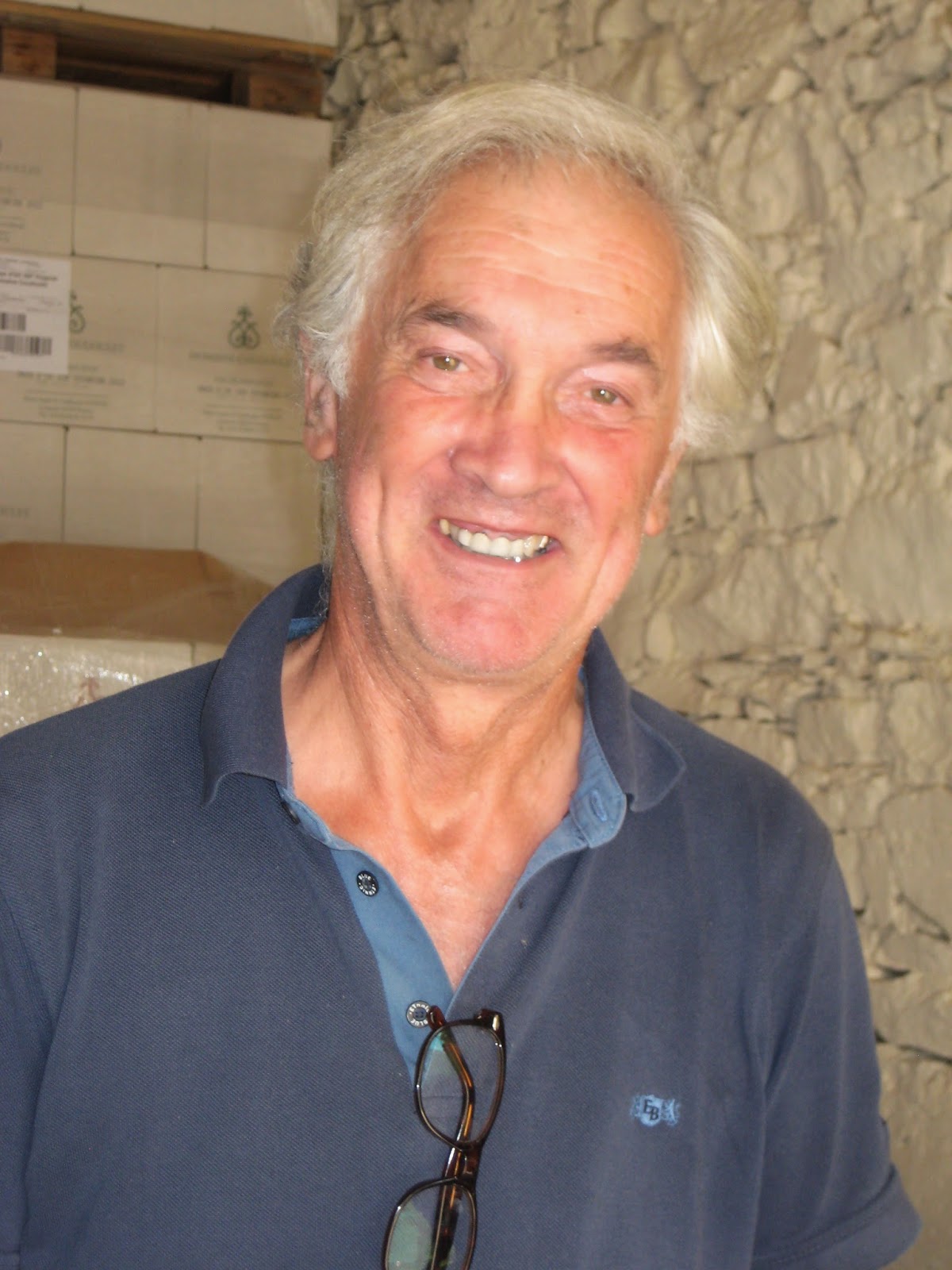 Pierre-André's son, Olric, is doing a stage with Avignonesi in Montepulciano – this seems appropriate, seeing that they have Sangiovese.   'Il faut prévoir la suite' observed Pierre-André.

2013 Viognier – 6.00€
Light colour. Lightly peachy, soft and rounded on he nose, with peachy fruit on the palate, but not much acidity. Quite fresh.  A simple vinification, with a little skin contact.   And they have a new system for clearing the juice;  Once the juice is pressed they inject a gelatine fining into the must and stir up some  nitrogen under pressure for two or three hours, so that the bourbes float to  the surface and can be run off, leaving clear juice.  It has the advantage that it is very quick and also economises on energy as you do not need to cool the juice to so low a temperature, and you lose less juice.  With classic débourbage you would have 10 hectolitres of bourbes to filter from a 100 hls of juice, but with this system it is only 2 or 3 hls.

2013 Pinot Gris. – 6.00€
Who else has Pinot Gris in the Languedoc, I wondered.  Light colour and lightly mushroomy on the nose, and softly spicy.  Some varietal character.  Medium weight with nice texture.  They wanted something different,  rather than just another Chardonnay, and it complements the Pinot Noir nicely.

2013 Sangiovese. – 6.00€
Élevage in wood.  this is  their second harvest of this variety.  They were inspired by a Sangiovese that they had tasted at the Seigneurie de Peyrat outside Pézenas.  I remember that Sangiovese from a couple of years ago, and delicious it was too.    Sangiovese is not officially authorised in the Languedoc, so they needed permission to plant it, which they did in 2006, without any planting subsidies, and then it was authorised the following year.   I really enjoyed the wine.  It had the classic ripe sour cherries of Sangiovese, some lovely fresh fruit, with supple tannins.  No great depth, or complexity, but would be delicious with a plate of pasta.  Pierre André observed that it was quite a productive variety.

2013 Pinot Noir – 6.00€
Quite a light colour. Quite a firm nose.  A touch of liquorice. A bit of tannin.  Quite fresh.  You could drink it chilled.  Simple vinification. Pierre André observed that there is a big demand for Pinot Nor en vrac.  The négoce pay twice the price of Syrah for it.  Obviously something to do with Gallo’s Red Bicyclette cuvée. 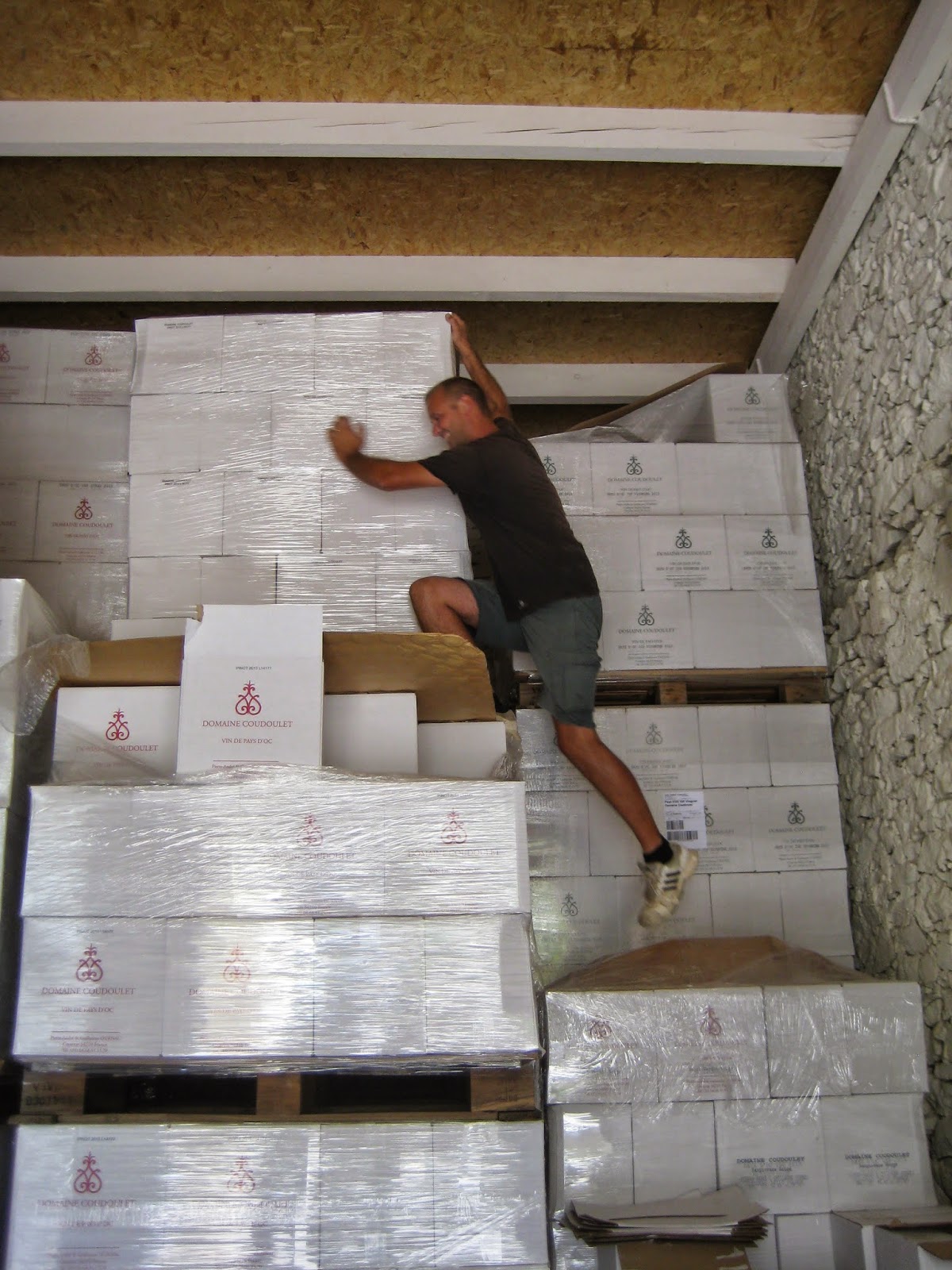 And then onto Minervois :

2011 Minervois la Livinière – 15.00€
The trophy winner.  70% Syrah, with 10% each of Carignan, Grenache and Mourvèdre which were vinified by carbonic maceration, while the Syrah was given a classic vinification.  Pierre-André, on his oenologist’s advice, feels that carbonic  maceration rounds out the flavour.  Élevage in barrels for 60-70% of the blend for 12 months, and then blended with the vat component.  The wine then spends another 12 months in vat before bottling.

Medium colour. Quite fresh and peppery on the nose, with some black fruit.  And on the palate, rounded, rich and with ripe tannins and a firm backbone.  A lot of weight  and body, with depth and complexity and lots of nuances of flavour.  Supple and drinking well now, but with some ageing potential.  Rich and rounded.  1998 was the first vintage of this cuvée.

We talked about the future. Guillaume is wondering about other grape varieties, but is not sure what.  And maybe he would like another Minervois cuvée.  His uncle  observed, je suis vigneron avant tout.  I do my best with both vins de pays and Minervois.  The problem is the two  separate syndicats  who se tirent dans les pattes, or shoot themselves in the foot.  For  Pierre André it is the vins de pays that allowed them  to develop Minervois.  ‘And Minervois is a produit phare, a flagship,  of which we are very proud’. 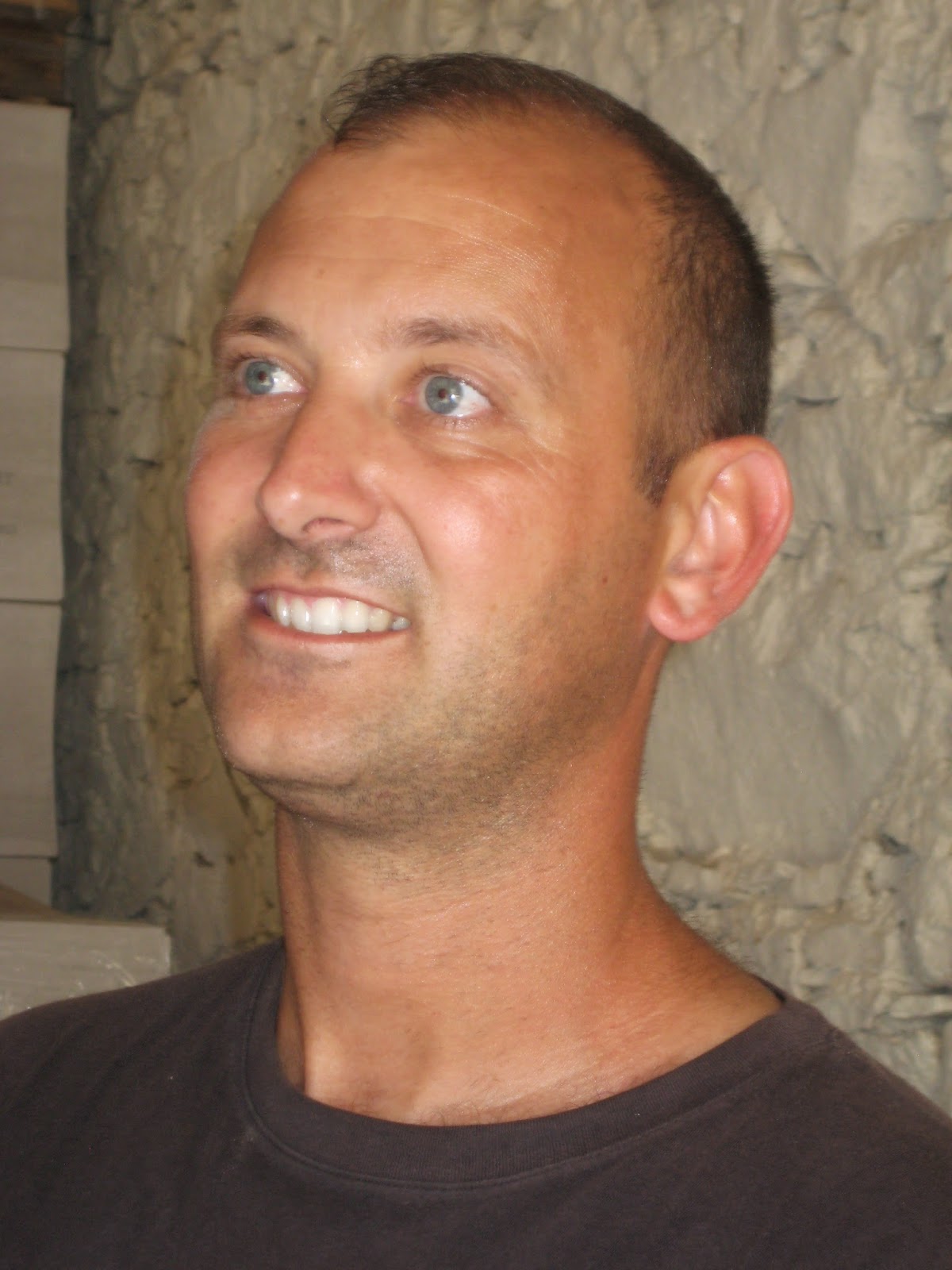