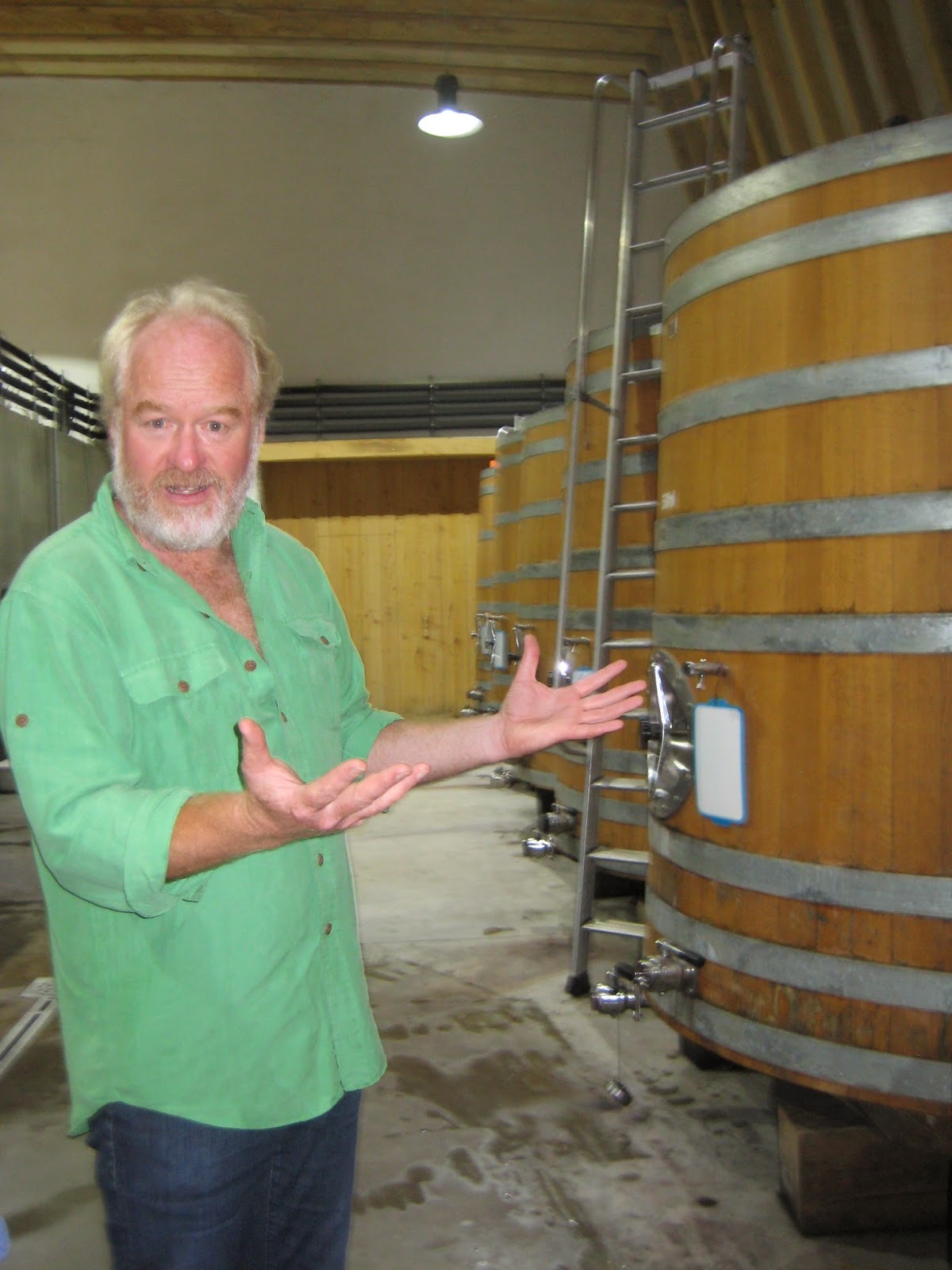 Come and see my vegetal roof, or toit végétal  was an invitation, that I could not possibly refuse!    It came from Bertie Eden of Chateau Maris in the village of la Livinière.   He has built a brand new cellar on the outskirts of la Livinière  off  the road  to Caunes-Minervois.  Not only is the roof green, but the bricks are made of hemp straw and the whole cellar, apart from the concrete floor,  could be recycled. 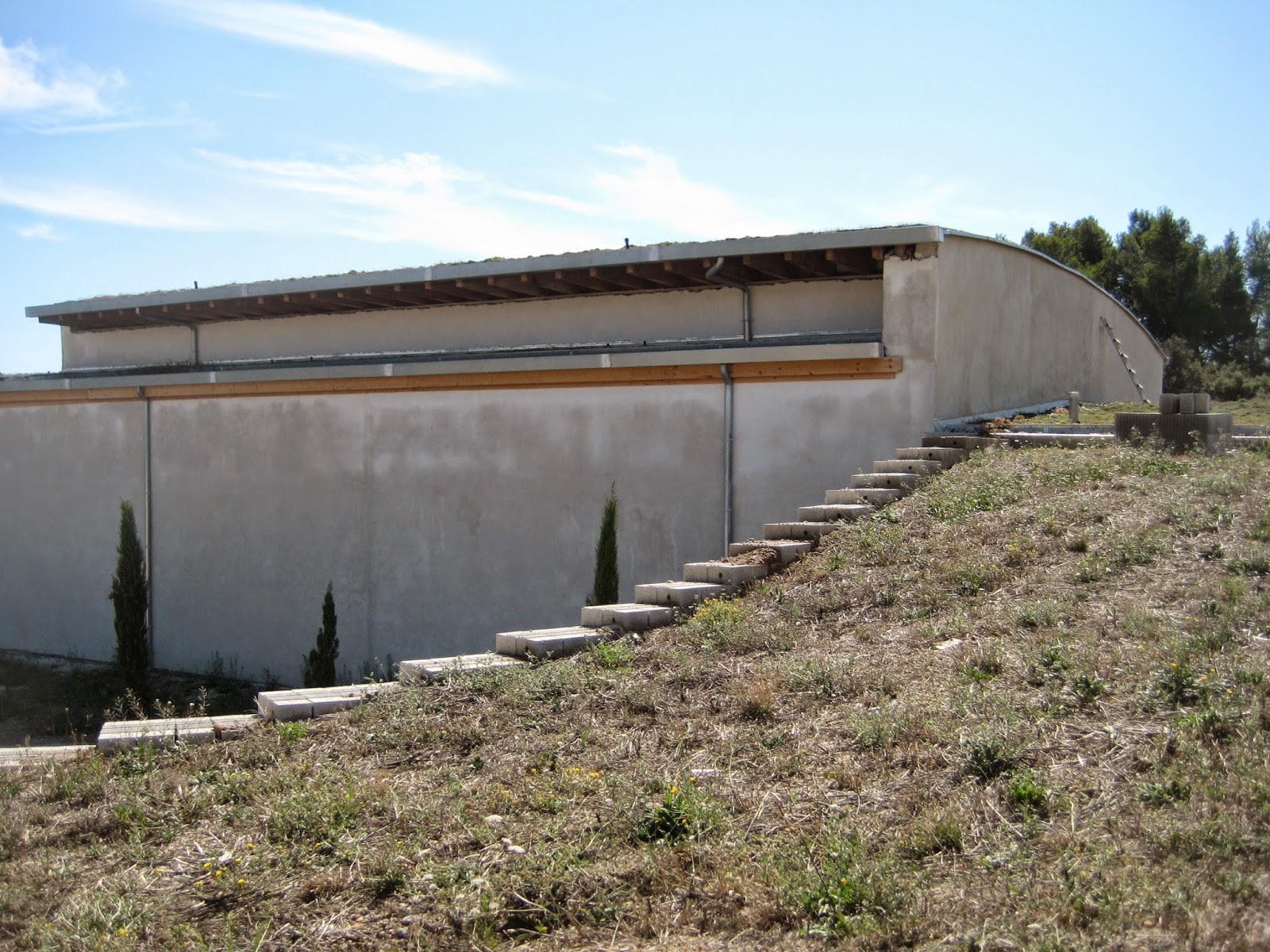 Bertie talked about the bricks, made from the straw of hemp.  Building material in France must be authorised, so that their parameters are recognised, as to how much weight they can bear and so on.  Hemp is not, but wood is, so there had to be a wooden frame joining the bricks, which are made from straw mixed with lime, which is put in a mould and dried. 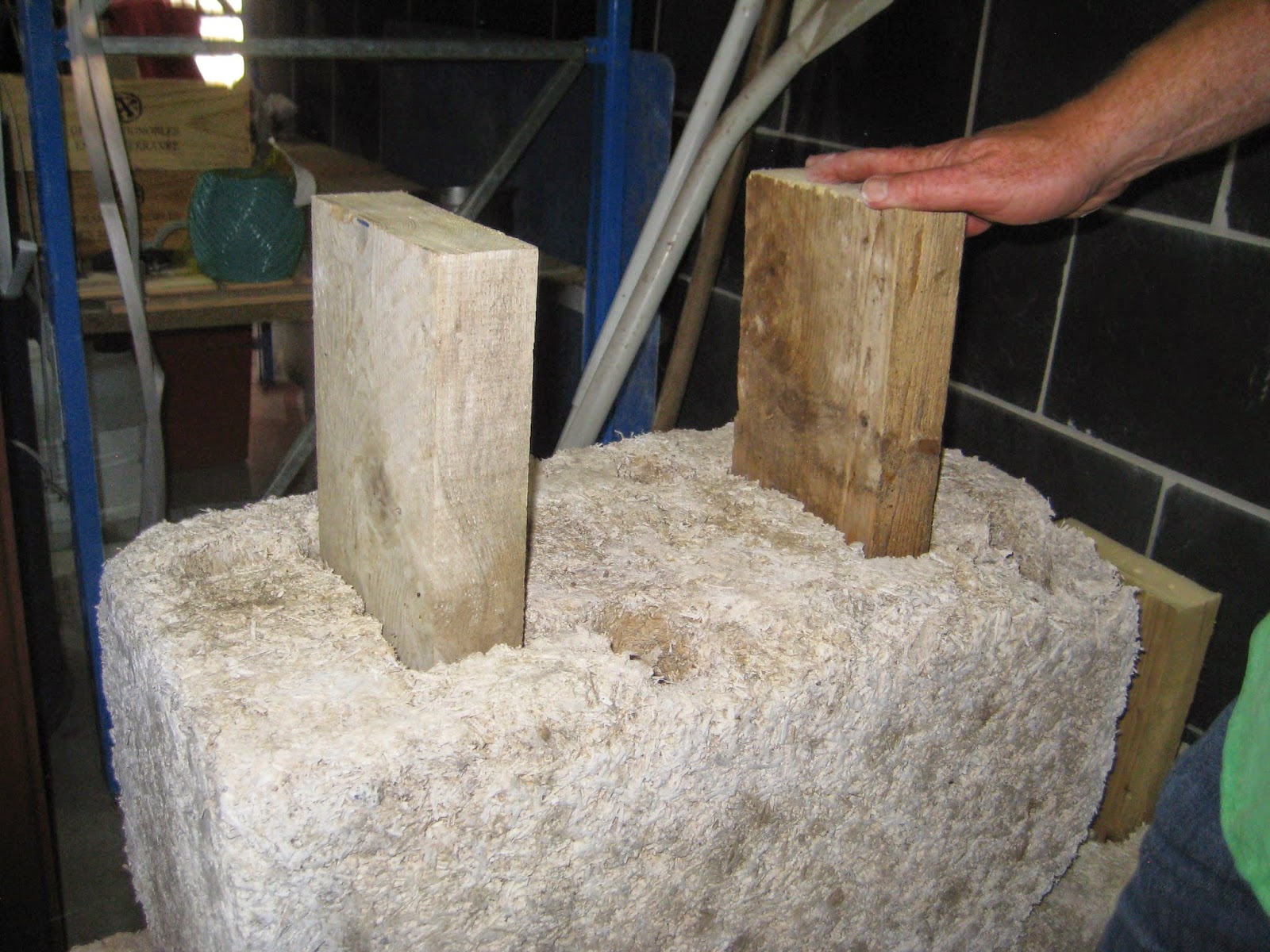 The bricks are extraordinarily  light.   Ordinary straw is very similar to hemp straw, but with one big difference, hemp straw can breathe, so it redistributes air and consumes CO2, at the rate of 44 kilos per square metre per year.  Altogether there are 4000 square metres of wall.  And there is no temperature control in the cellar; that happen naturally.   The floor is concrete for reasons of hygiene and weight.   An alternative would have been lime, that that can crack, which would give problems with bacteria.     As for the vegetal roof, you buy it in rolls by the metre like a lawn.  And Bertie is also considering a vegetal covering for the outside walls. 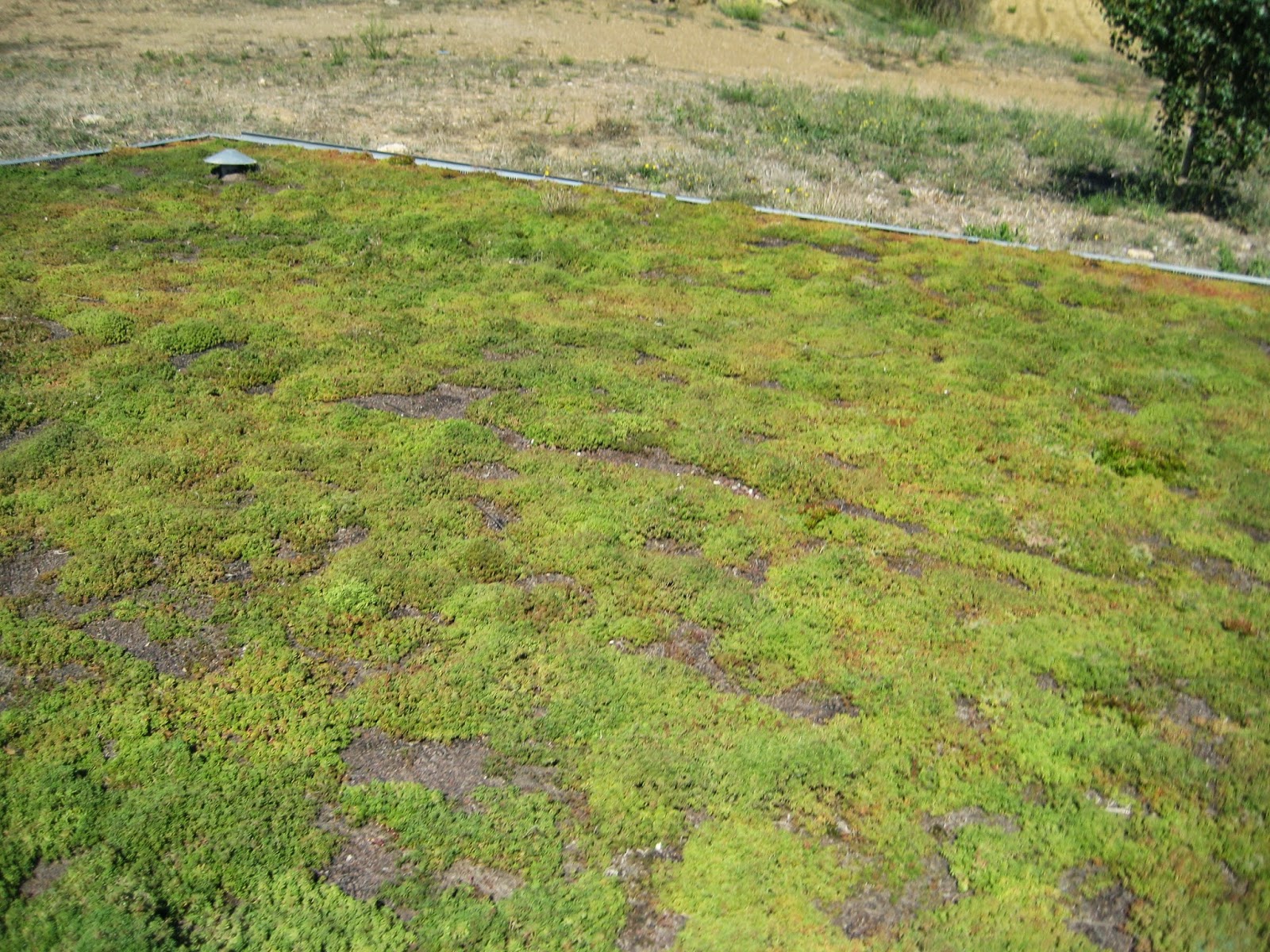 Bertie’s barrels come from a cooper in Burgundy, Grenier, which is a family business. It also made his  tronconique vats, equipped with a chapeau flottant, so that they have a dual purpose, for fermentation and for élevage.   And there are unlined cement vats, and concrete eggs.  Bertie had wanted concrete vats without metals supports, and the way to achieve that is with eggs.   He had  compared Grenache from a barrel and from an egg; and found the egg to be is more lively and fresher. 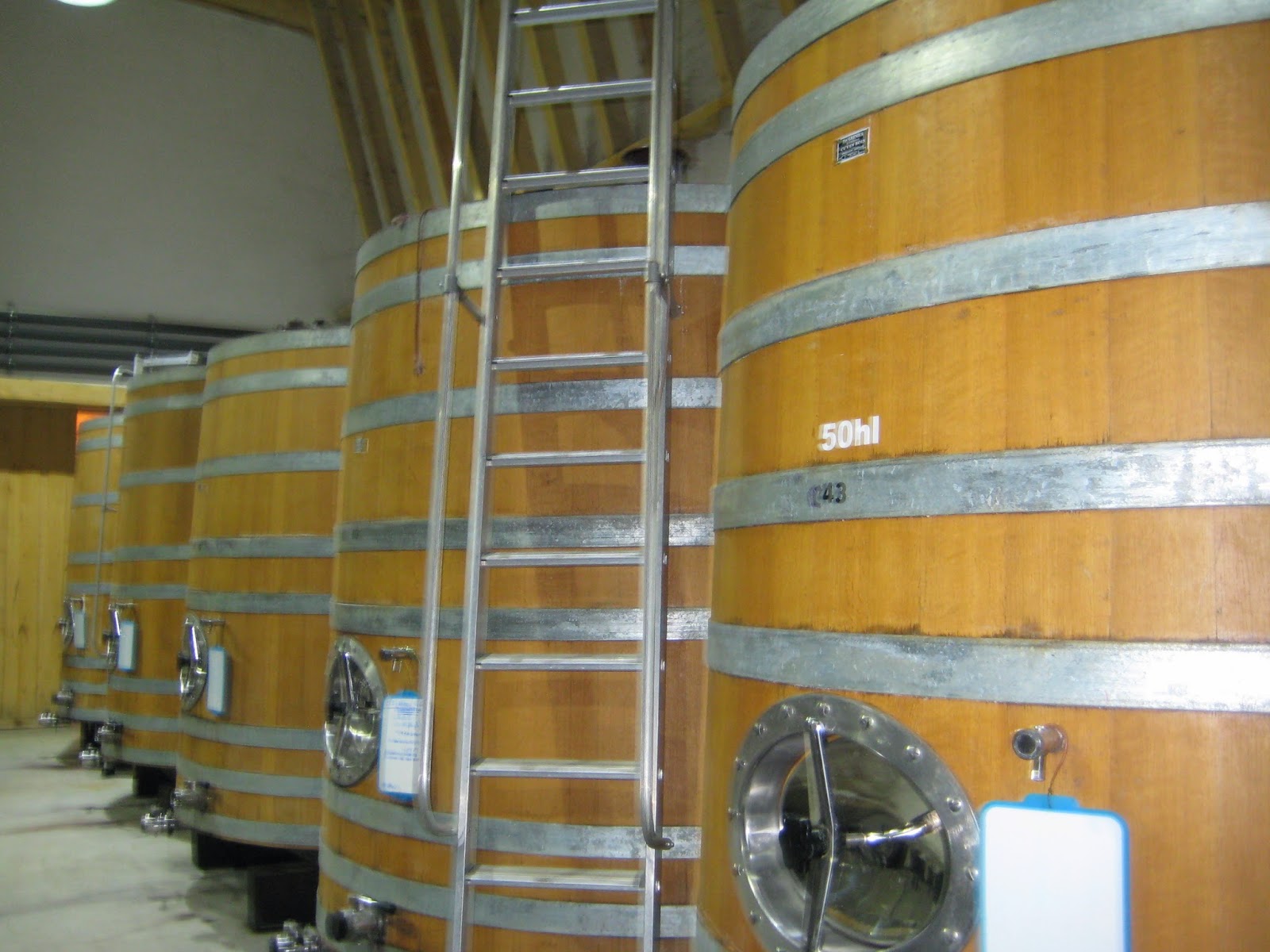 He was expecting to start the harvest the following day, 10th September, picking some Grenache to make rosé.  He has a good crop of Grenache, so this will be a first passage, leaving the rest of the grapes to ripen more for the red wine.   They were a week away from picking the first Syrah.  This was not  going to be a deckchair year, observed Bertie. They have already done a lot of leaf-plucking to aerate the grapes and they will need to do a lot of triage, first some in the vineyard and then again in the cellar.   The uncertain weather since will not have helped.

Bertie now has 47 hectares of vines all around La Livinière.  His first vintage here was 1997.  He has had vineyards in other parts of the Languedoc, but these days is just concentrating on the Minervois.   And when did you know that you wanted to be a winemaker?  When I got kicked out of school (the rather smart public school, Stowe)  for making beer.   He then went to Australia to work for Len Evans at Rothbury; spent time at Castello di Rampolla in Chianti Classico, and with Becky Wassermann in Burgundy and Christopher Canaan  and Spain.   And then he came to the point when he wanted to be his own boss and make his own wine.   He looked in the Languedoc and really liked what he saw in the Minervois.  La Livinière has a reputation for the quality of its Grenache, with some splendid  old vines.  Bertie’s vineyards range in altitude between 250 – 180 metres and he has been certified biodynamic since 2004. 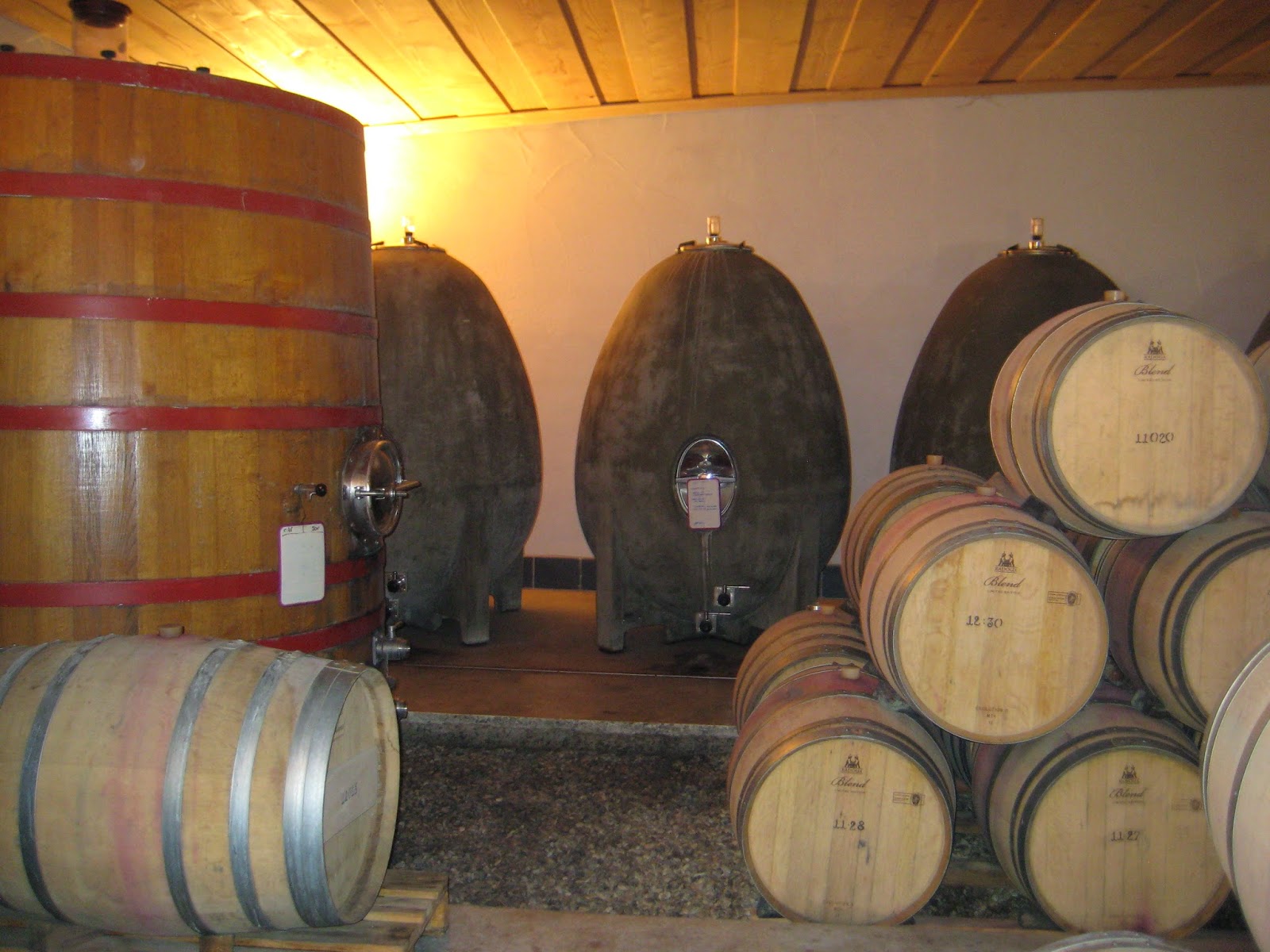 And now to taste:

2013 Grenache Gris. Vin de France -24.00€
Tasted from the barrels,  and fermented in wood.  Will be bottled after the harvest.   Quite rounded textured palate.  Some floral notes, elegant with good acidity.  Grenache Gris really is well adapted to the south.  Good length.

And when I asked about the tipicity of La Livinière, Bertie suggested that was a delicate subject, and a difficult question to answer.  Every vineyard is individual.   It depends on the wine grower. 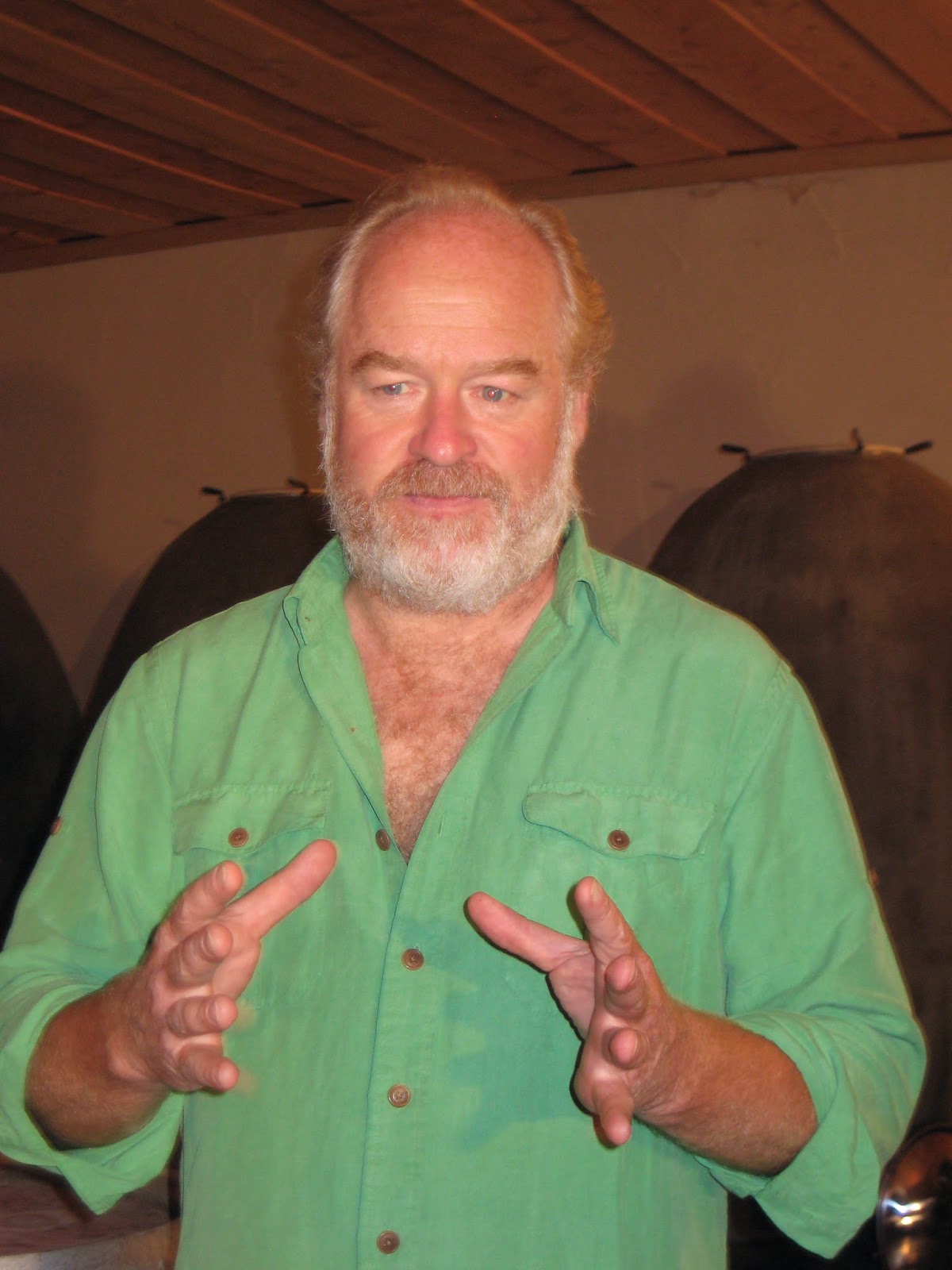 2012 les Anciens, Minervois la Livinière   - 16.00€
Mainly Carignan  aged in 50 hl foudres for 15 months.  We enthused about Carignan.  'It is a noble variety here, and it can stand up to the seasons'.    This had the elegant rusticity that is the benchmark of good Carignan, with some firm red fruit.  Medium weight, and really quite elegant, especially for Carignan.  A delicious glass of wine.  Bertie is very enthusiastic about 2012 as a vintage; it is lighter and fresher than 2011, which was a very hot vintage.

2012 las Combes, Minervois la Livinière  – 16.00€
Grenache is the dominant variety,  80 years old vines, élevage in 50 hls foudres and some concrete.  The nose was quite  closed, with a more open palate, with ripe cherry fruit, perfumed with an elegant tannic streak.

2010 las Combes, Minervois la Livinière
This has spent four years in an egg.  From the same vineyard as 2012 la Combes.  More open nose, rounded fruit, but a little dense, riper and more mature, with a leathery note on the finish.  2010 was a hotter vintage than 2012.  Essentially Bertie didn’t do anything to the wine, but  just let it happen, with no racking, and adding just a little SO2 at bottling.  He made 999 bottles, 199 magnums and 99 jeroboams, and is selling it at 100.00€ a bottle.  The idea was to aim high and produce something exceptional, and it certainly stood out, but maybe, perversely I prefer the 2012.

And we finished with a taste of 2012 Grenache Gris, which was bottled at the end of 2013.  Light golden.  Nicely nutty, with very good acidity.  Curiously it tasted more oaky than the 2013.  Structured with very good length.   And a great finale to a fine tasting, before clambering up a ladder to look at the toit vegetal, which needed watering.  It will certainly have had plenty since my visit. 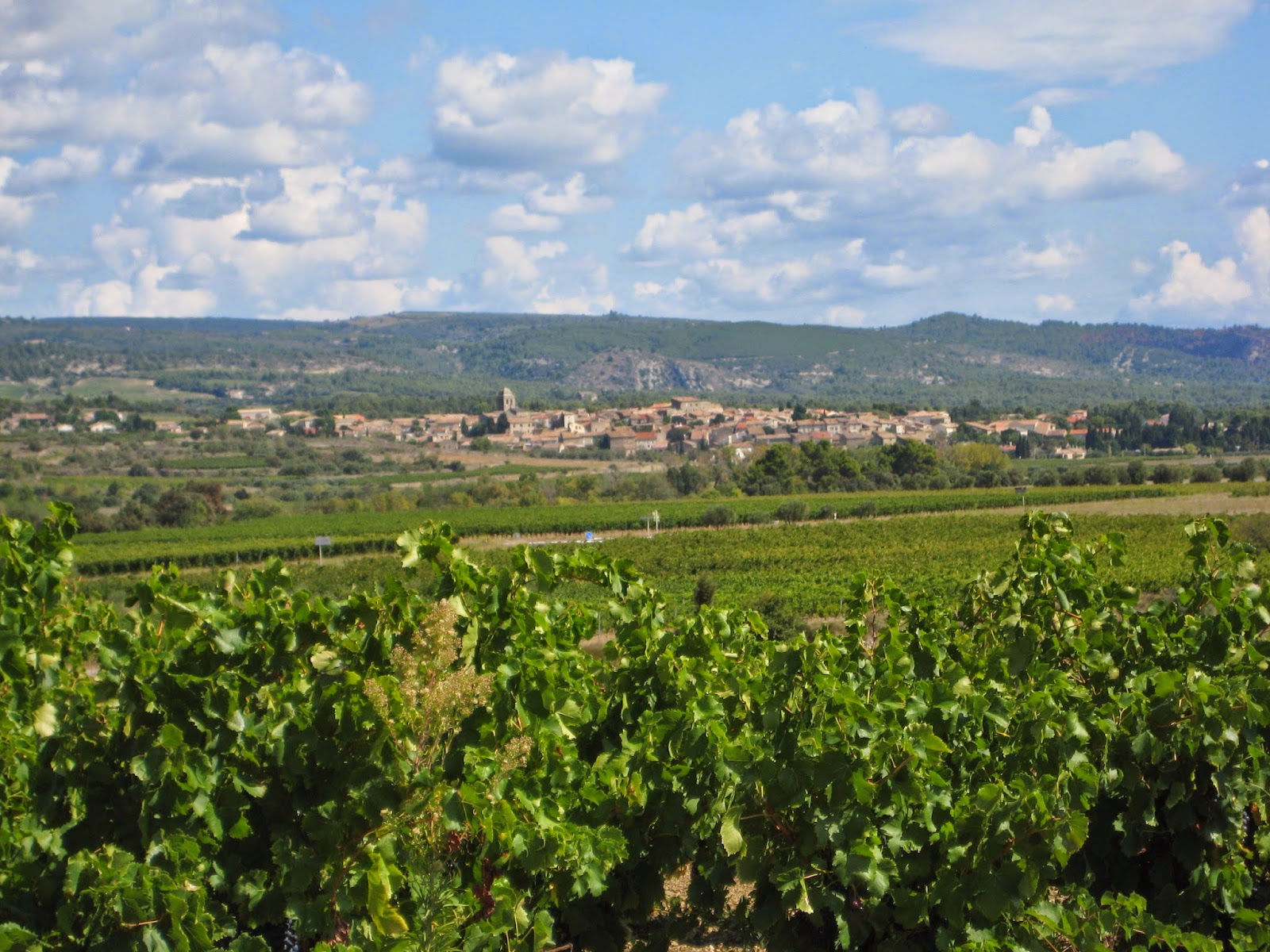