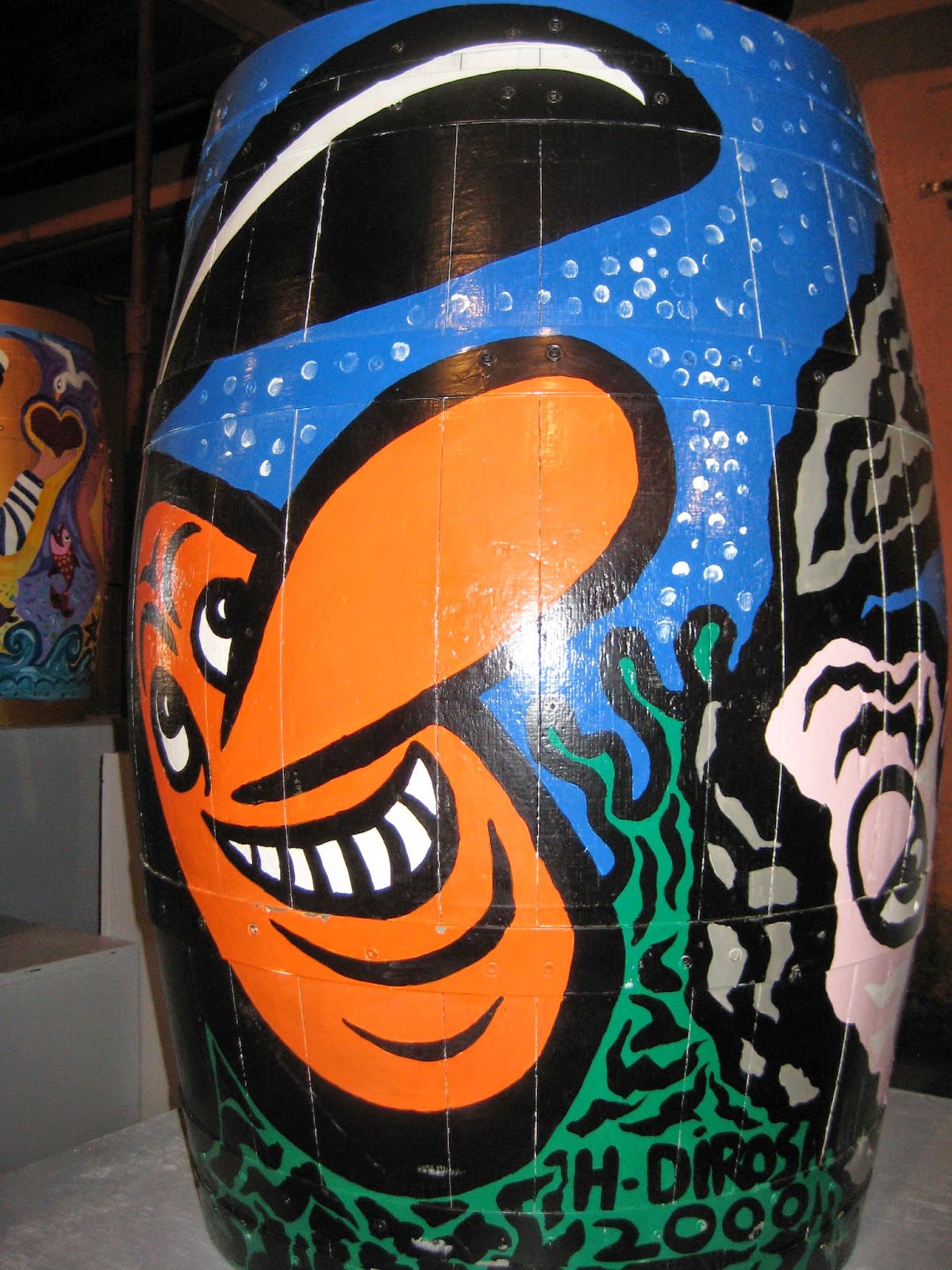 Domaine Puech Haut is just outside the attractive village of St. Drézery, with its friendly café.  You approach the property along a driveway lined with olive trees and lavender bushes, and at the end there is a stylish visitors’ area where anyone is welcome to pop in and taste.   And adjoining the cellar is a house that was built in 1991, but confusingly it looks at least a hundred years or so older as it is built from old materials.  From the visitors’ centre you can look down on the barrel cellar, including  a whole collection of barriques painted by various artists, some more well-known than others.   The first barrique was painted by Hervé de Rosa, and in return he received 150 bottles of wine. 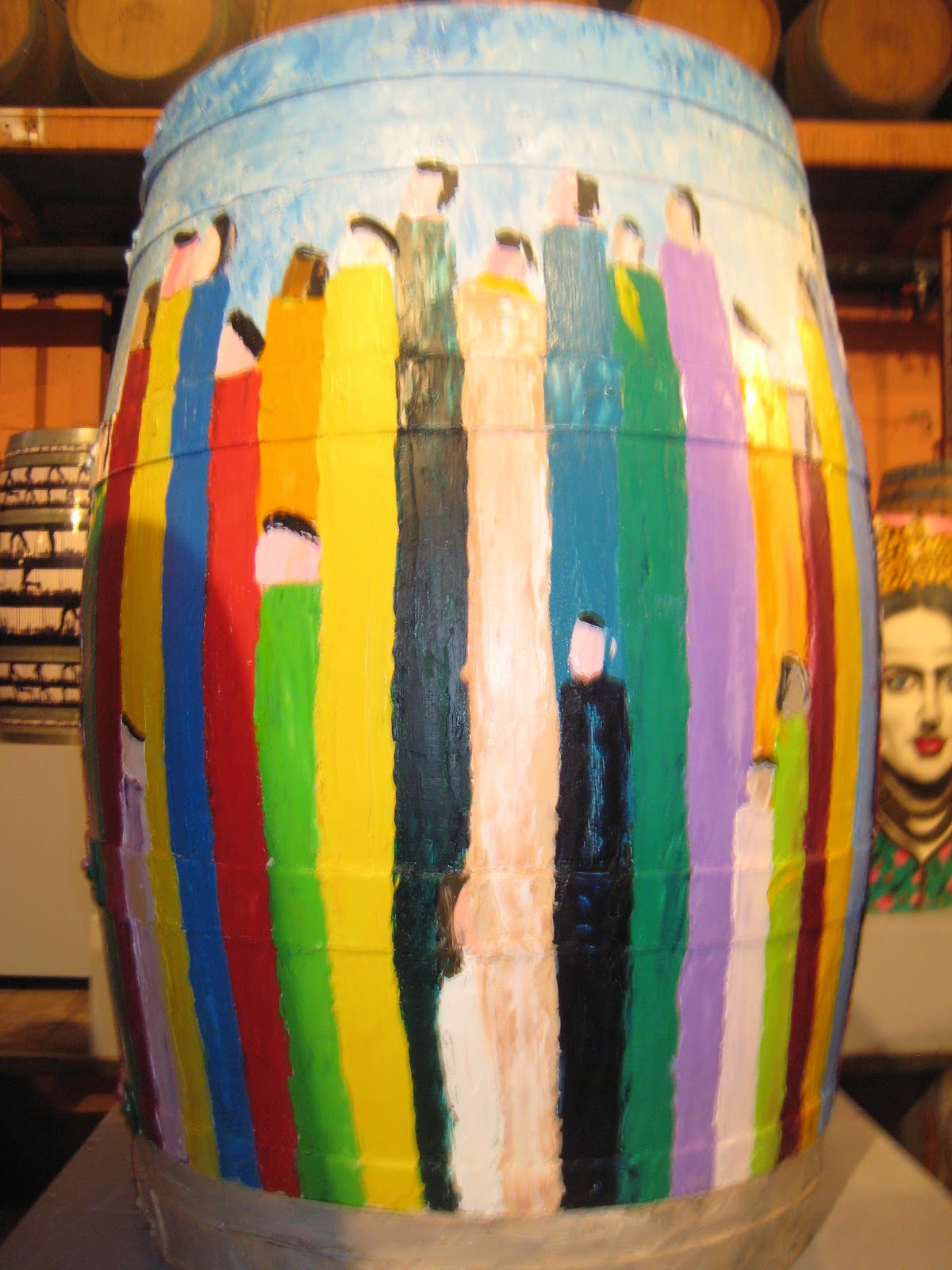 Alain Asselin is director of oenotourisme and is a very articulate ambassador for the estate.   He explained that it was created by Gérard Bru in 1985, when Gérard decided to plant 25 hectares of vines, half red and half white.   The first wines were made in the mid-1990s. Gradually the estate has been extended to include 40 hectares in the Pic St. Loup, for which 1999 was the first vintage.   At St.  Drézery the vineyards are planted with Syrah, Grenache and Mourvèdre, on undulating hillsides, with vines of different ages, and differing yields and therefore different expressions of flavour.  Altogether there are 90 different plots, with one vat per plot, to enable a very detailed sélection parcellaire.    Michel Rolland used to consult here, but these days it is Philippe Cambié.  They have some concrete fermentation tanks, made in Italy, of a shape that I have never seen before, designed to keep the châpeau emerged during fermentation, so that you obtain better extraction. The bottom is square, with a tapered top.  Alain  described them as Le Rolls de la cave. 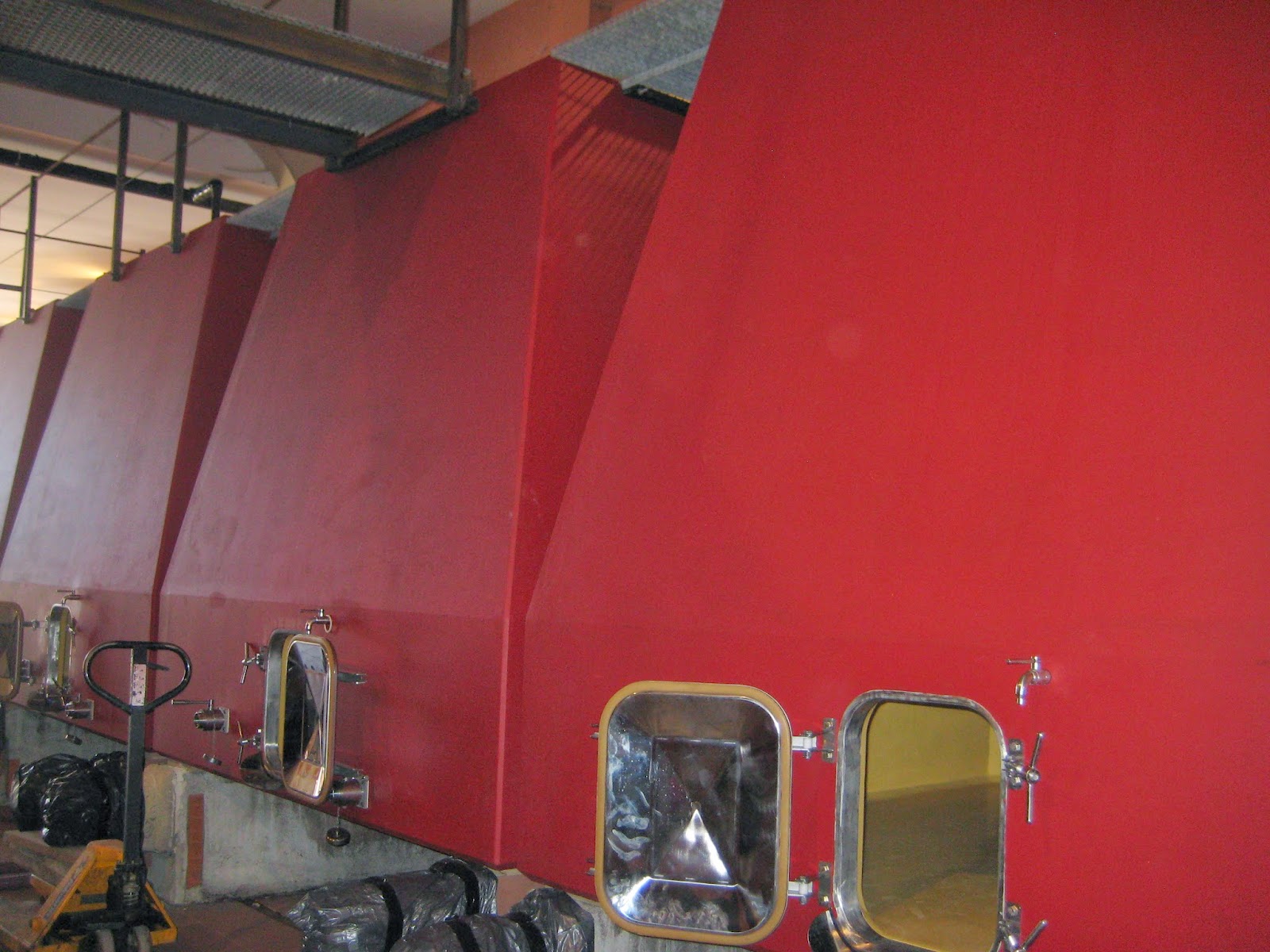 For coopers they favour Damy in Meursault, Taransaud in Beaune and Seguin Moreau in Cognac, and they have barrels of varying ages for their wine.   Alain talked of the second revolution in winemaking, temperature control, and in particular the ability to cool things, which has changed everything, giving you complete control over your grapes and the fermentation.   As for the vineyards, the harvest was due to start the following week, the second week of September.  They carry out a green harvest in July and August, reducing the yield for the Syrah to 20 hl/ha. 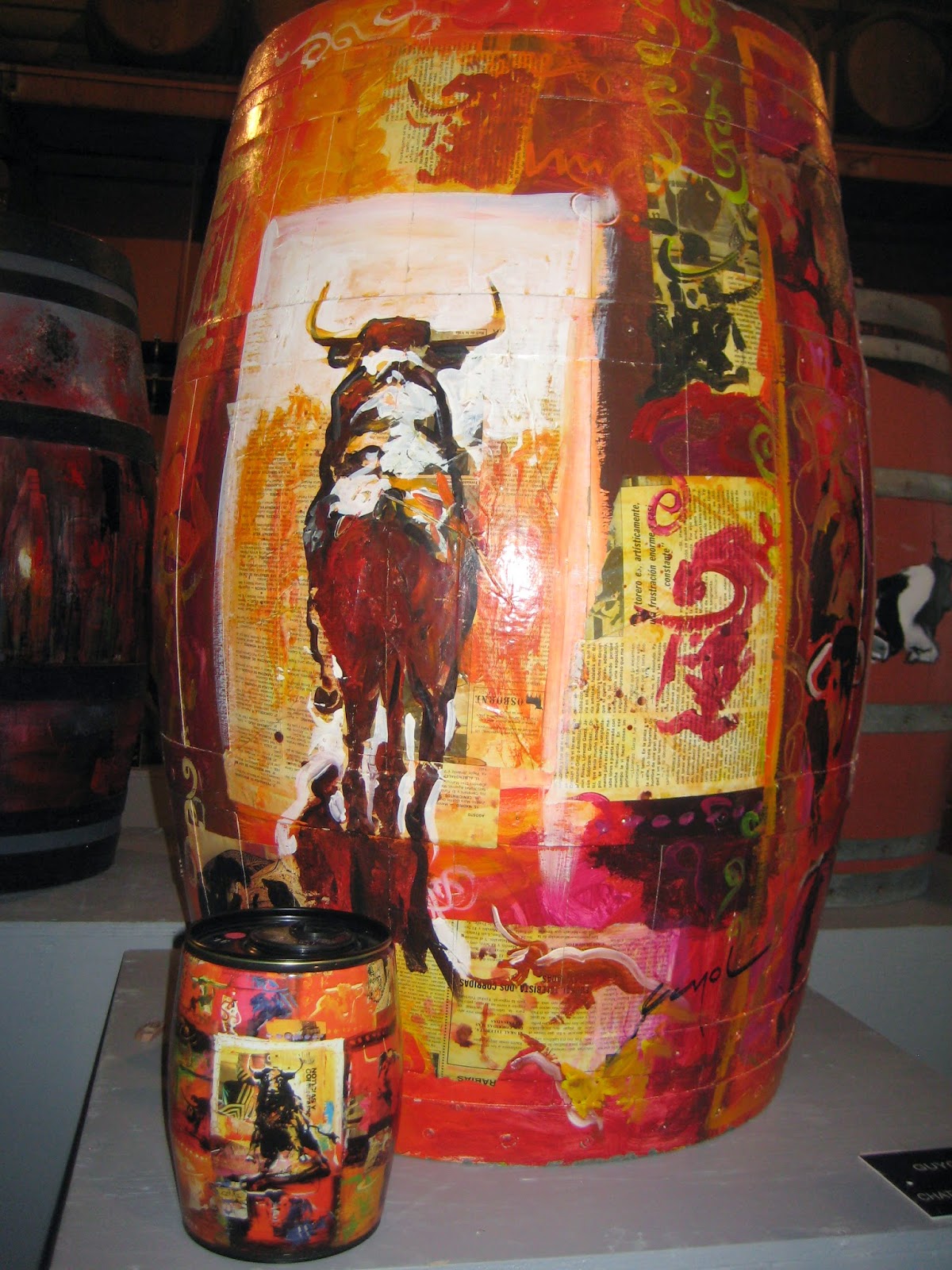 And then we tasted:

2013 La Closerie du Pic rosé– 14.50€
A blend of Cinsaut, Syrah and Grenache.  Light colour. Quite a fresh nose, but a touch amylic. Quite fresh raspberry fruit on the palate, but again an edge of amylic acid and bonbons anglais.   We had a conversation about translating acidulé into English,  my dictionary says: acid drops.  I prefer my rosé without acid drops. 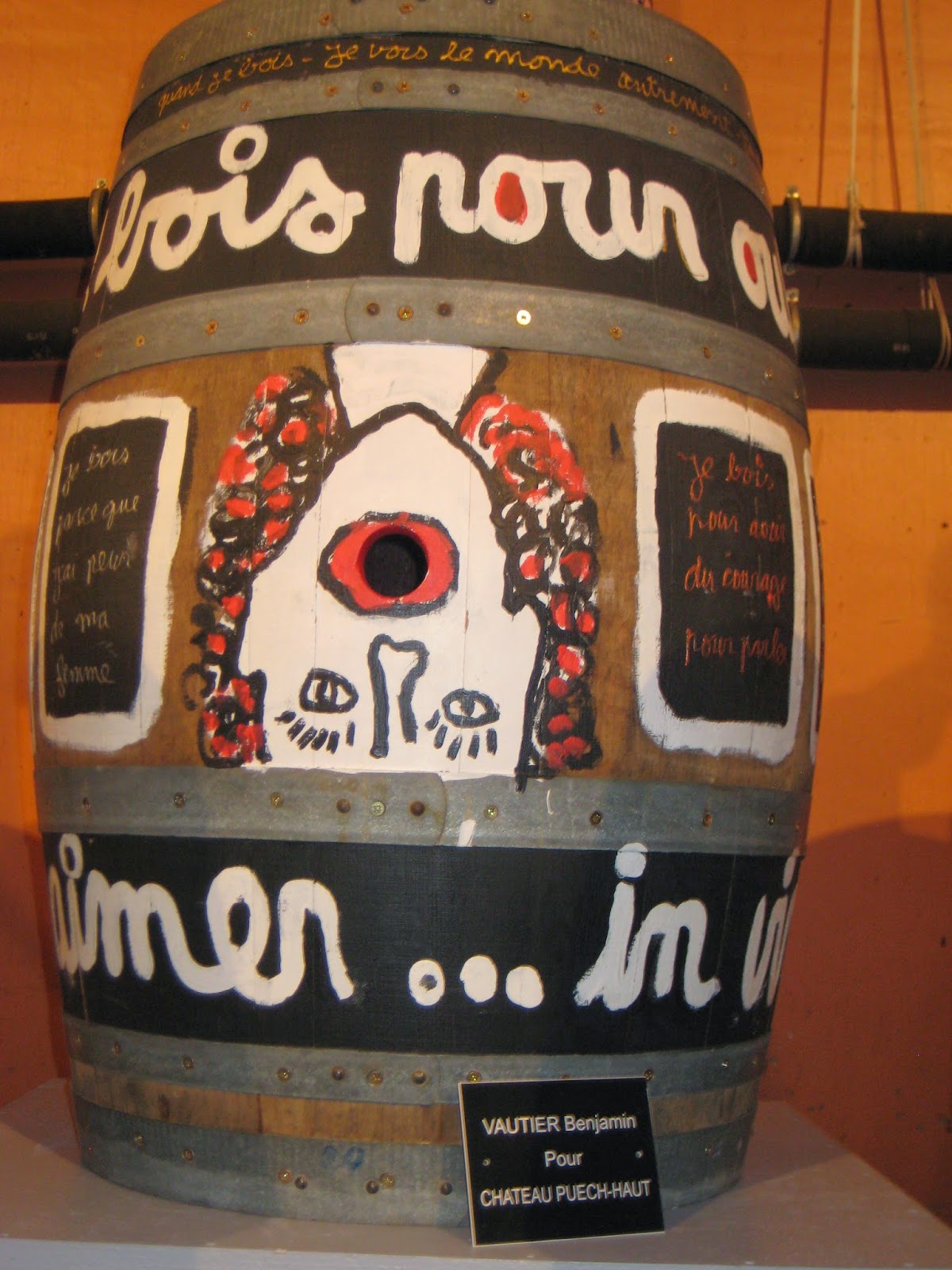 2013 Tête de Belier rosé –  20.00€
The name of this rosé originates from a Roman sculpture of a ram or belier that was found in the vineyard.  And they have reproduced it to sit at the foot of several barrels.    98% Mourvèdre, and the other two per cent is a secret.  Quite rounded.  More solid than the previous wine, with firm acidity.  Quite sturdy and needs to fill out a little. 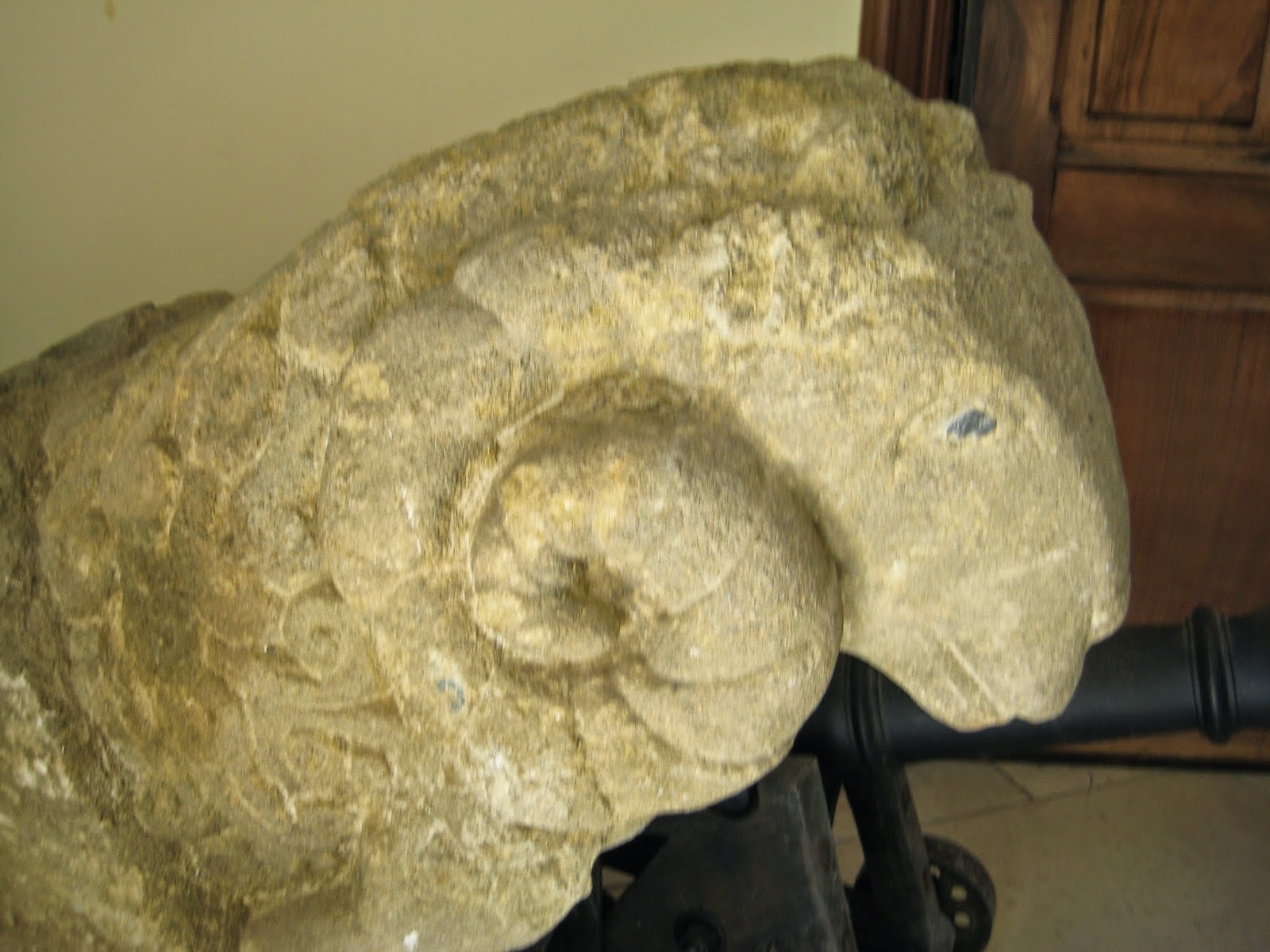 2012 Prestige rouge, Coteaux du Languedoc , St. Drézery – 16.70€
St. Drézery fits into the Grès de Montpellier and the wine is equal parts Syrah and Grenache.  Medium colour.  Quite solid black fruit on nose and palate.  Oaky, vanilla and tapenade.  Some garrigue notes.  The wine spends six months in barrel, none new, but slightly toasted.   Medium weight.    38 hl/ha.  I felt the wine was still quite closed and needed to evolve in both bottle and glass. 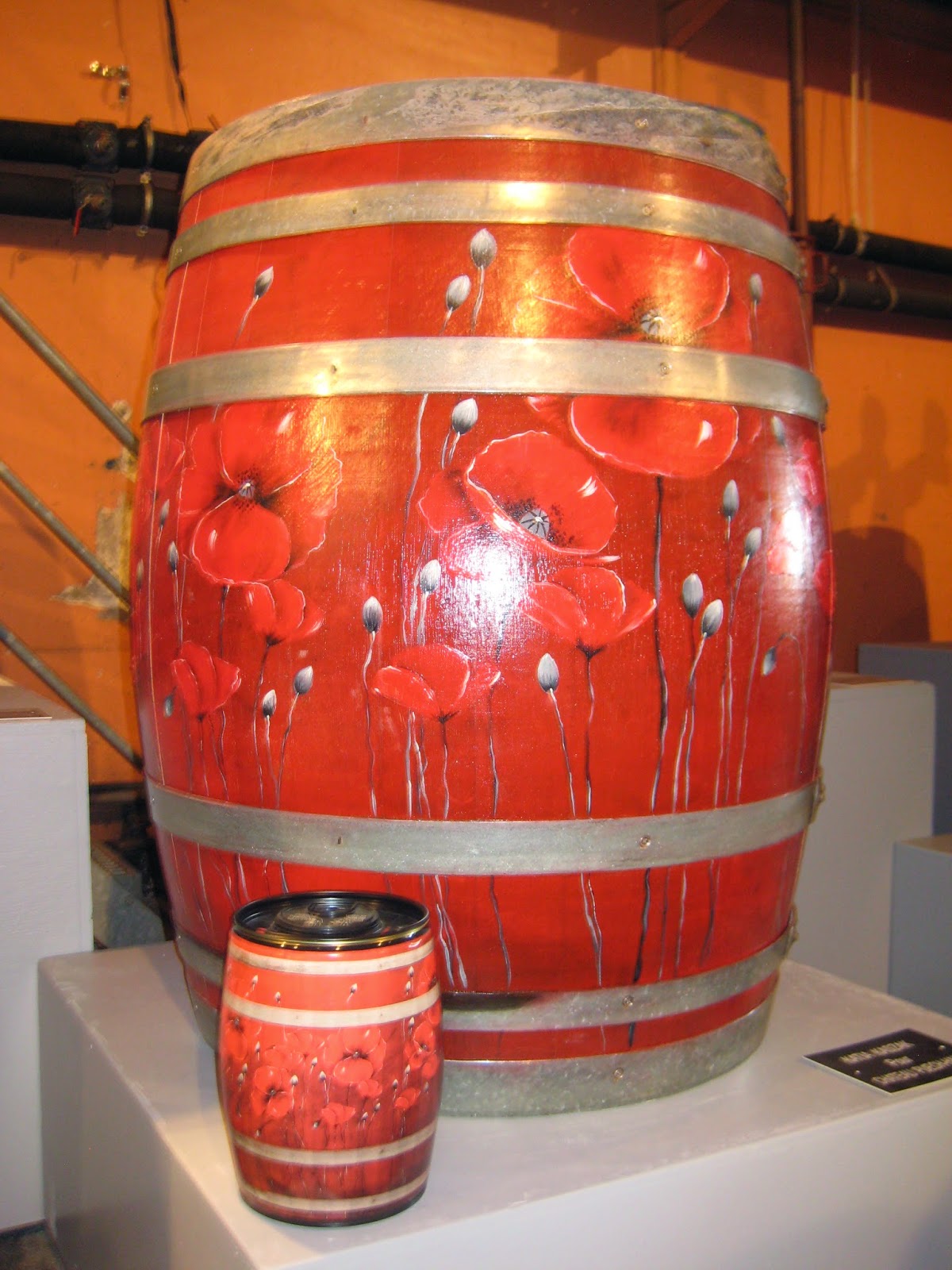 2011 Clos du Pic, Pic St. Loup – 41.70€
24 months élevage in barrels- two thirds new and a blend of 60% Mourvèdre with Syrah. Quite a deep colour.  Chocolate on the nose.  Quite sweet dense and sturdy.  I thought of Pierre Clavel’s comment about opulent Pic St. Loup.  15˚.  Ripe sweet and dense and lacking in elegance.  All upfront and dominated by the oak. I wondered how it would age?

Asked about the tipicity of St. Drézery, Alain replied: There isn’t any.  St. Drézery has lots of galets roulées, but essentially it is a question of the style of individual vignerons.  He was rather vague about other wine growers in the area.   And M. Bru came here for family reasons, as it is close to his childhood home. 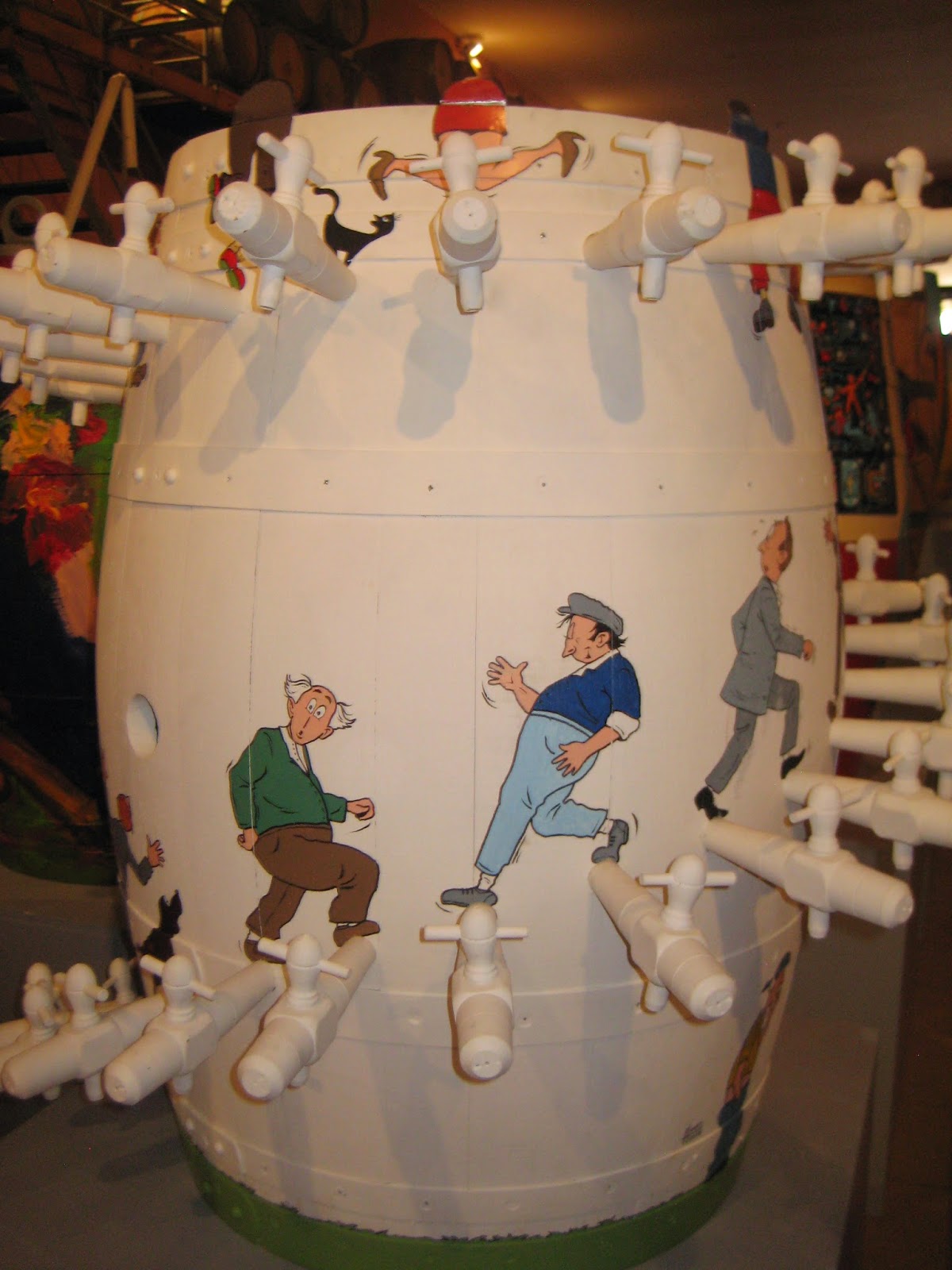 2011 le 40ème, St. Drézery – 88.00€
This cuvée has been made five times,- 2001, 2002, 2007, 2010 and 2011 so by no means every year.  A natural wine, with no added sulphur.  Crushed by foot.  One vat of handpicked grapes, producing 1500 – 1800 bottles à l’ancienne.  From one plot of Syrah and one plot of old Grenache, that are 65 years old vines.   Élevage of 24 months in new oak.  Fermented by carbonic maceration, which really surprised me as I had always assumed that carbonic maceration was used when you wanted to soften the tannins  rather than enhance the longevity of the wine.  Alain explained that they put whole grapes in the vat and then add carbon dioxide.  Quite a rounded palate, with ripe chocolate and vanilla and soft tannins.  Leaves a sweet taste.  15˚   They are aiming for fresh fruit;  I am not sure that they found it.

And asked about the typicity of the domaine, Alain replied 'chaleureux, aromatique, with a touch of elegance.  Wines with personality'.

And we finished our tasting with the white wines: 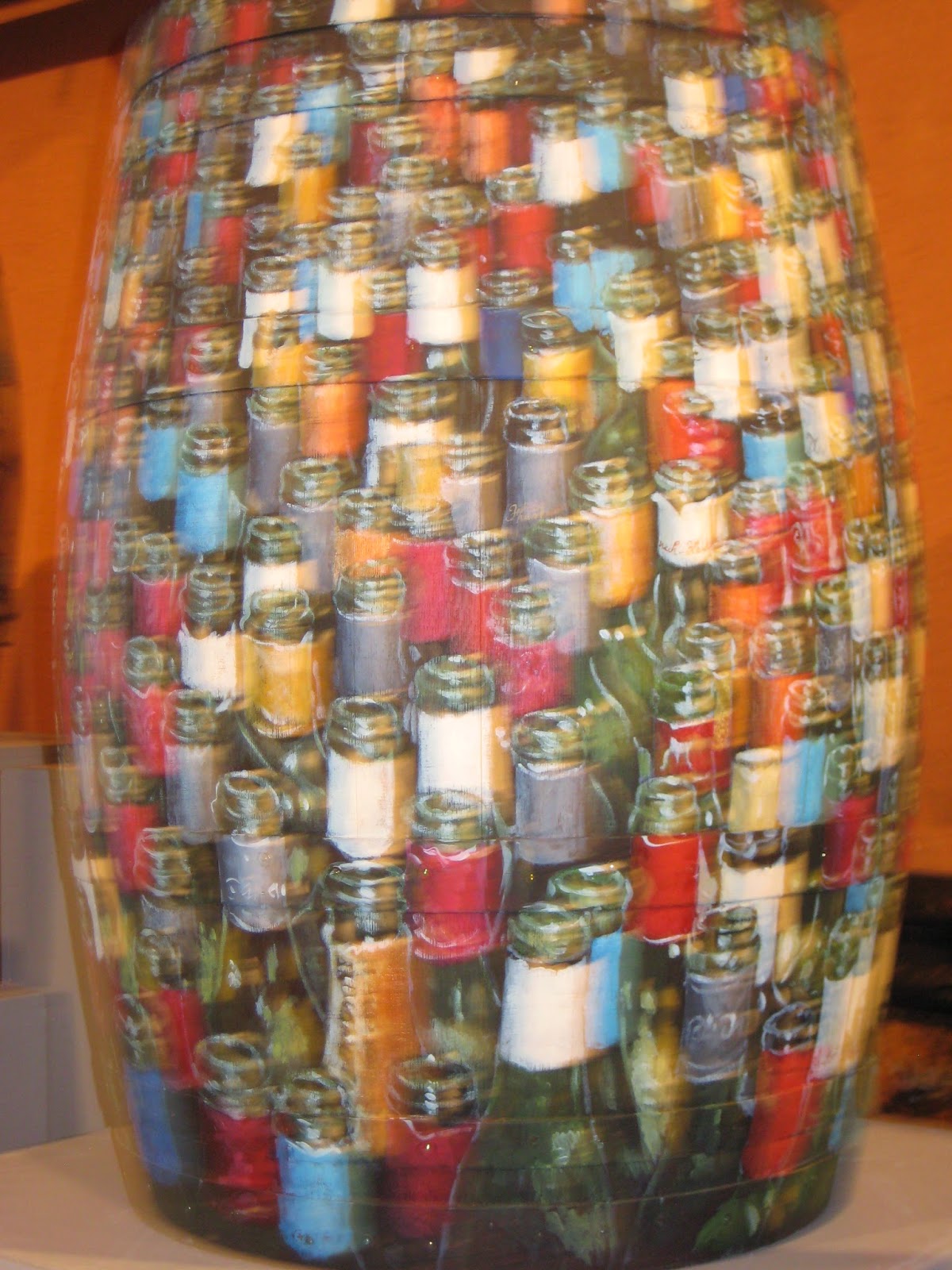 2013 Prestige – 16.70€
Vinified in vat.  80% Marsanne and 20% Roussanne.  Pale golden, quite rounded peachy nose, and on the palate quite full and textured with some acidity.  Fills the mouth.


20% Viognier with 80% Grenache Blanc and a little Roussanne.  Vinified 'à la bourguignonne,'  in wood, with bâtonnage for eight months.  Quite golden.  Quite oaky.  Leesy oaky palate.  Textured with a dry finish.  Very Burgundian style so that the method masks any flavour of the grape varieties.   Youthful and textured.   14˚. 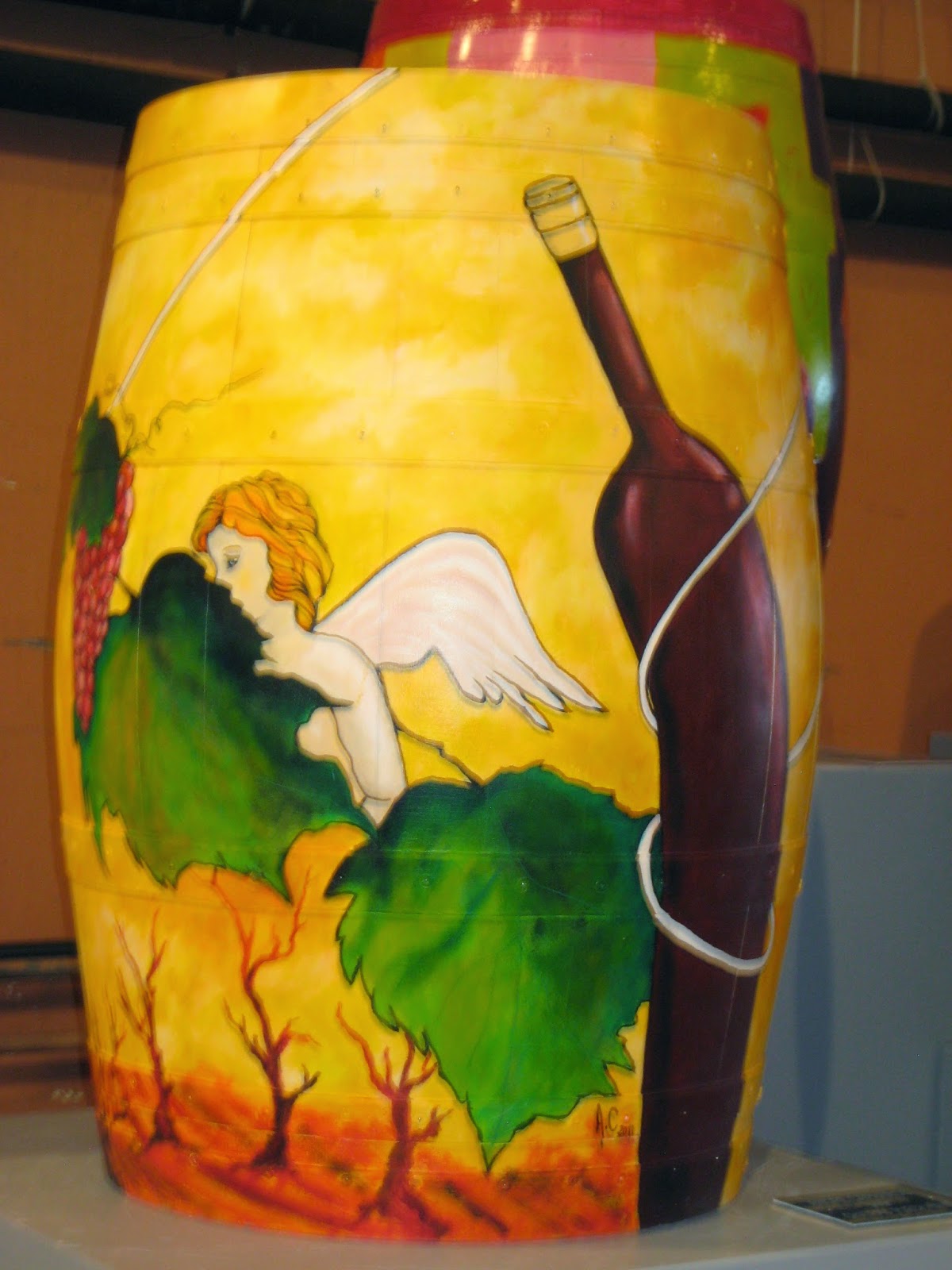 Leon Stolarski said…
I once picked up a few bottles of Puech Haut reds at auction. After drinking one bottle, I put the rest back through auction. Enough said. ;-)
21 January 2015 at 15:14

Leon Stolarski said…
Probably not, but any loss would have been worth it, to get them off my hands. ;-)