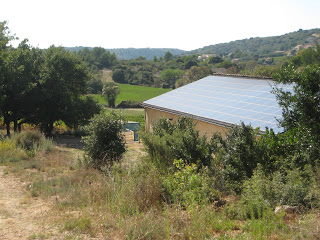 I’ve always had rather a soft spot for Clos de l’Amandaie as we quite by chance drank their wine for our house warming party when we bought our Languedoc house now over 12 years ago.  We had wandered into the wine shop in Clermont L’Hérault looking for a bottle of rosé for lunch, and three cases of wine later …. So I am ashamed to admit that it has taken me so long to actually go and visit the estate.

The very first vintage of Clos de l’Amandaie was the 2002, and that is what we drank for our party.   The estate  is in a wonderfully lost part of the Languedoc near Aumelas.  I took the narrow road that runs parallel to the A750 from St. Paul-et-Valmalle, with dramatic views and then headed south towards Aumelas, which is not really a village, but more a series of hamlets.  Philippe Peytavy explained how his grandfather had made wine, but then his father elected to join the coop of nearby Le Pouget.  Philippe, after working for a négociant, realised that he really wanted to make his own wine.  He began with 8 hectares, and now has 17, producing Grès de Montpellier, some IGP and an original Vin de France.   The cellar is modern and functional.

His range of Pays d’Oc is called Chat Pitre, a play on words, pitre in fact means daft or stupid – I could not resist observing that the adjective suited our cat perfectly.

2015 Chat Pitre rosé – 6.00€
One third each of Syrah, Grenache and Cinsaut, all saigné. Light orange pink colour.  A touch of boiled sweets on the nose, and a mouth filling vinous palate.

2015 Clos de l’Amandaie blanc, Languedoc – 11.00€
Based on Grenache blanc and Roussanne; all kept in vat.  Philippe does two pickings of Grenache blanc, one when the grapes are just ripe, at 13° and a week or so later when the alcohol level has reached 14.5°.  The two are blended together and given an élevage on lees, and then blended with the Roussanne component.  Quite a rounded palate, textured and ripe with some weight and white flowers.

2014 Huit Clos, Languedoc – 17.00€
Roussanne aged in barrel and a little Grenache blanc, with some lees.  The ageing depends on the vintage, usually about ten months, with lees stirring until the winter chill.  The oak is integrated on the nose, and more obvious on the palate, with a nutty tannic streak and a slightly sweet buttery finish.  Satisfying texture on the middle palate.

2015 Chat Pitre Rouge – 6.00€
One third each of Syrah, Grenache and Cinsaut.  Classic vinification.  Medium young colour.  Fresh red fruit and little pepper on both nose and palate.  Easy drinking – and the sort of red wine that you can chill in the summer.

2014 Clos de l’Amandaie, Grès de Montpellier – 11.00€
Philippe made his first Grès de Montpellier in 2013.  Before that it was Coteaux du Languedoc, or Languedoc.  Equal parts of Syrah, Grenache Noir and Carignan, with 15% Cinsaut.  All aged in vat, apart from the Syrah which spends 12 months in wood.  Deep colour.  Rounded ripe peppery nose, with a fresh streak on the palate.  Black olives and tapenade, rich and rounded with youthful tannins and a ripe finish.  Supple spice and garrigues.  In short a lovely glass of wine.  I know why I liked it so much all those years ago.

2014 Huit Clos, Grès de Montpellier – 17.00€
Equal parts Syrah and Grenache Noir.  All aged in wood for 12 months after blending, immediately after the fermentation has finished.  Lots of garrigues and black fruit, and some furry tannins.   A ripe mouthful balanced with a steak of freshness.

The 2011 from a warmer vintage, was deep in colour, with more cassis and spice and some leathery and peppery notes, as it was beginning to mature.  Rich and long.


Petit Manseng is a grape variety that you find more commonly in Jurançon in the Pyrenees.  Philippe picks the grapes sometime between mid- November and mid-December so that they are nicely dried, but without any rot, noble or otherwise.  He then tries to press them, slowly in whole bunches and then the juice is put in vat, with some natural yeast.  It is all very temperamental.   The 2015 was still fermenting the following September, and then it goes into an acacia barrel.   The 2014 was very intense and honeyed with very good acidity, very smooth, with balancing acidity and utterly delicious.  Philippe explained that he has just 30 ares, which he planted in 2002, which gives him an average of 7 hectolitres, most years.  He observed that the partridges eat more of the grapes than the wild boar!   It was a delicious finale and the taste lingered with me as I drove away. 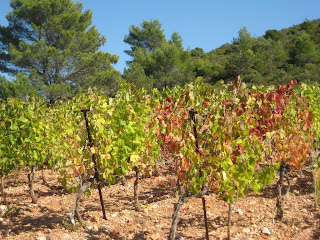