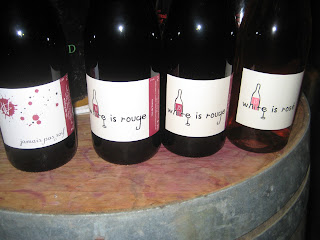 A friend said, you must go and meet the father of my son’s school friend; he makes rather good wine, so I did and found myself tasting in a large barn in the middle of the village of Aspiran.

Gregory, despite his name is very firmly French; his father is English, but his mother is French and he was born in Paris and was brought up in France, so speaks French rather than English.  Wine for him was a complete change of direction; he was working as a sports journalist in Paris, but his wife’s family comes from the Médoc, and he had what he called his Damascus moment in a vineyard in Bordeaux and realised that he wanted to change direction.  Initially he worked as a sommelier and in a wine shop, but he was selling wines that he did not choose and realised that he was really interested in the plant, so he studied oenology in Beaune and worked for Yannick Pelletier in St. Chinian while he looked for vineyards, and chance led to a meeting with somebody in Aspiran who had five hectares for sale, two plots of old vines, red and white, Grenache, Syrah, Cinsaut and Carignan, and Terret blanc and Grenache blanc, with an average of 50 years.  There is half a hectare of 70 year old Carignan and Cinsaut and some 85 year old Grenache, the oldest Grenache in the village, and the Syrah is a bit younger.  It sounded as though Gregory had really struck lucky.

When we met, he had just completed his 4th harvest, for he had acquired his vines just before the 2013 vintage.   He was delighted to find that no products had been used in the vineyard for fifteen years; the soil was really alive.  Gregory favours the natural school of winemaking with a natural yeast and as little so2 as possible, preferable not even at bottling, but has he observed, it is not a dogma.  He aims for the best possible grapes – and the work is very hands on.  He shares cellar space in a large barn with a couple of other small wine growers.

Aspiran comes within the cru of Pézenas, but all Gregory’s wines are Vin de France.  The soil is alluvial, sand with galets, and good drainage, which gives suppleness to his wines.  His labels are fun.   Who else could have a label saying white is blanc, let alone white is rouge? 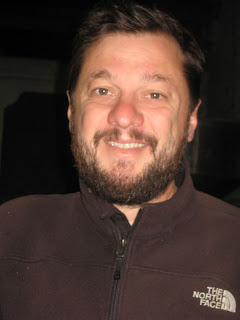 2015 White is blanc -12.00€
A blend of two third Terret to one third Grenache blanc, blended at the harvest.  Élevage in vat, and  bottled in April. Initially a bit cidery on the nose but that goes with the air to turn firm and stony, with good acidity.  Structured and tight knit, and not very southern.  Terret has rather restrained aromas, and Grenache blanc gives drinkability

2015 White is rosé.
A pure Cinsaut – saigné after a few hours.  Pale orange pink. Quite an exotic nose.  Rounded palate, dry and perfumed.

2015 Jamais Pas Soif – 9.00€
40% Grenache, and 30% each of Cinsaut and Carignan, all destalked, and given a classic vinification. Deep young colour.  Spicy red fruit.  Quite firm – a rustic note of Carignan – tannin and acidity and good fruit.  Needs to settle down a bit.

2015 White is rouge – 10.50€
Based on Syrah and the oldest Grenache, with a little Carignan and Cinsaut.  Classic vinification with a two week maceration.  Good colour.  Quite firm and peppery and structured, with quite a tight youthful palate.

2014 White is rouge
30% each of Syrah, Cinsaut and Carignan with 10% Grenache.  Blended before the winter.  Gregory had made two versions, with and without sulphur – I tried the one without.  Gregory observed that he thought sulphur closed the nose – I found some spicy fruit but also what I call a slightly natural animal nose, with some tannin on the palate.  It was quite intriguing –  and I wondered if some oak would round out the wine.  For the moment he does not use oak barrels.  And I was left in admiration of his courage in changing direction in that way, and of his commitment.  He deserves to go far. 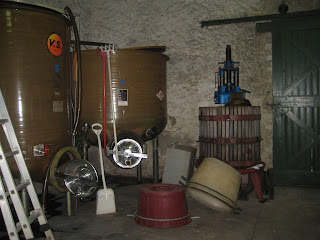 Alan March said…
He's a good man and the wines have improved year on year. I really liked the 15s. Good to see you moving to the wild side again Rosemary :)
6 February 2017 at 15:15