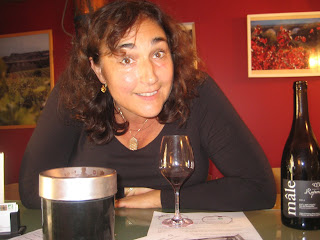 Valerie Tabariès at Domaine de Roquemale is a welcoming hostess in her tasting caveau right in the centre of the village Villeveyrac.   She talked about the early beginnings of the estate, which they started in 2001.  She and her husband, Dominique Ibanez, are both children of viticulteurs for their parents belonged to the nearby coop of Poussan.   They began with 7 hectares and now have 12, and left the cooperative in 2005 and converted to organic viticulture.  They found a maison de vigneron in the village, with quite a sizeable cellar.  Their first vintage at Villeveyrac was 2006.

Like all good vignerons, they attach enormous importance to their work in the vineyard, keeping plots separate and making as many as ten different wines.  They find Mourvèdre difficult; it is only good one year in four.  And for white wine, they are shifting from Marsanne and Roussanne to Picpoul and Clairette.   And they also have a lot of Alicante Bouschet.  Their vineyards are in an isolated valley outside the village. You go under the railway line that was used for transporting bauxite, which was mined nearby.   And Roquemale means mauvaises roches, in other words, a very stony place, and the lieu-dit of the vineyard. 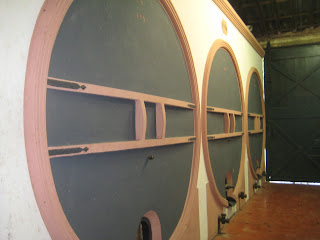 Our tasting began with:

2015 Roc Blanc, Languedoc – 11.00€
An intriguing blend of Marsanne, Roussanne, Grenache Blanc and Gris, Vermentino and Viognier, all in the same plot and all picked over three days.   20% of the blend is fermented in oak and then spends a further four months in oak.  They buy just two new barrels a year. I found the nose in the young wine quite oaky, but it was very intriguing with other nuances and Valerie explained that it had ageing potential.  She wants a balance of weight and freshness, and is considering fresher, more acidic grape varieties.

2015 Méli-Melo, Pays de Hérault – 7.00€
An unusual blend of 80% Alicante Bouschet with a little Cinsaut and Syrah.  The Alicante Bouschet is macerated on its skins for just one day as they do not want it to be too hard or rustic. It is less than 12° so quite light in the mouth.  It is fermented and kept in vat until bottling in June and was pleasantly perfumed with some easy fruit and a streak of tannin.  And an original note on the finish.

2015 Les Terrasses, Languedoc – 8.00€
A blend of Syrah, Cinsaut and Mourvèdre, with an emphasis on the fruit, making an easy to drink wine with some rounded dry spice.  Medium weight. 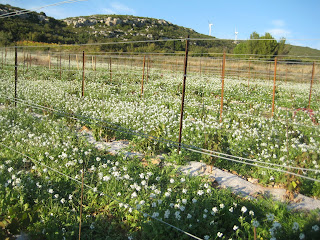 2014 Les Grès (de Montpellier) – 11.00€
Villeveyrac is within the area of Grès de Montpellier and this is the traditional cuvée that really represents the estate and what they are doing.  The blend is 90% Syrah to 10% of Grenache Noir, and the soil is based on bauxite.  There is plenty of appealing spice, making a classic Languedoc and for easy drinking.

2014 Lema, Grès de Montpellier – 14.00€
This is mainly Grenache, with some Syrah and a little Cinsaut, from three plots on terraces and including some 50 year old vines.   Some of the Syrah is aged in barrel, but not new, one to six years old.  The palate is structured with some firm ripe fruit, with a sturdy balance of tannin and fruit.  There was a refreshing energy about the wine.

2013 Mâle, Grès de Montpellier – 20.00€
This comes from a plot of Syrah which they allow to get really ripe.  It is fermented by carbonic maceration and then spends twelve months in wood.  I found the palate quite rich and sweet, balanced with a firm tannic streak.  Valerie enthused about the 2013 vintage.  A very good vintage, ‘we got what we needed when we needed it, both sun and rain’.  The harvest was later than usually, only beginning on 15th September.  She explained that their valley is very hot, but the nights are cool. And it is much dryer there than in the Terrasses du Larzac.

And then she asked me if I could like to try a vieux Mâle – the 2010.  Could I resist!  The wood was more obvious as it was newer and the nose quite leathery with some rich spicy fruit on the palate, and some satisfying texture.  And the 2014 Mâle included a little Mourvèdre, with less obvious oak and some ripe spicy fruit.  It was supple and rich, with a fresh tannic streak and a good note on which to finish our tasting.    And then we went to look at the vineyards where Dominique was hard at work. 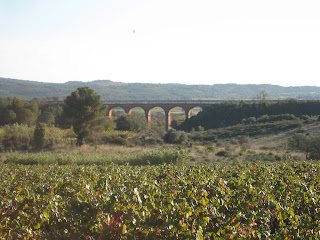