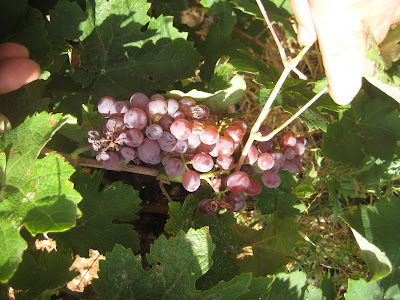 Pierre Fabre is yet another producer who has come to wine from quite a different field.  Although his father had vineyards near Sommières, in the eastern Languedoc, he ran a packaging factory in Belgium for a number of years    Then it was the moment to move on and he found the Château de Gaure outside the village of Cépie in the heart of the appellation of Limoux in 2004, and made his first wines in 2006.  It is a large property with an old château and cellar; the vines were in the cooperative. And not content just to make Limoux, Pierre has also bought vines in Roussillon, which he can sell as AOP Languedoc, rather than Côtes du Roussillon.   He has very precise ideas about his wine-making, aiming to be as natural as possible, using indigenous yeast and very little sulphur and in the vineyard, he works organically.    Philippe is also an artist and has designed some very colourful labels for his wines.

He concentrates on still wines.  His entry level wines, both red and white are Vin de France as they are blends of Limoux and Roussillon, Chardonnay and Macabeo for the white, and Syrah and Merlot for the red.    The first Limoux Blanc, a blend of 80% Chardonnay with some Chenin Blanc, is rich and honeyed, and almost sweet on the finish.  Pierre likes really ripe grapes and these were picked at the end of October. Oppidum, a reference to the Roman origins of the property, includes a little Mauzac as well as Chenin Blanc with the Chardonnay and is a selection of the best barrels.  Best of all was a mature Mauzac, from the 2009 vintage, with dry honey and herbal notes.  The remaining two wines, both red, come from Roussillon, and are rich and warming, making a sharp contrast with the fresher flavours of red Limoux.