Four Corbières estates, all of which produce some delicious wine, failed to make the cut for my Corbières chapter.  Here they are. 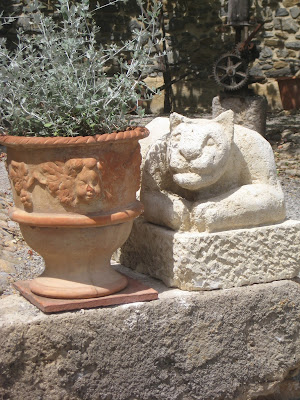 Château Grand Caumont is an old historic property.  You approach the property along a driveway that is lined with solid stones, that were once used to support enormous old foudres in the cellar. There was a Roman villa on the site and in the 9thcentury, Charles the Bald gave the land to his nephew. The château was burnt at the French Revolution, leaving just one tower from which there are views over the surrounding countryside.    In 1906, it was bought by the Rigal family who produced Roquefort cheese and when their cheese business was sold, they concentrated on wine.    However, they still have  a model of the town of Roquefort and an original poster advertising Rigal Roquefort.  The estate is now run by Laurent Rigal, with her loyal cellar master, Patrick Blanchard, who arrived at the property back in 1988.  Altogether they have 90 hectares in production.  The Orbiel river divides the estate, with 15 hectares of IGP on flatter land to the north of the river and the core of the estate for Corbières to the south, including some 80-year-old Carignan, all farmed by lutte raisonnée.  It was Laurent’s mother who first bottled their wine, in 1985, while her father had been content with sales en vrac.
We tasted in the dining room, with murals from the 19thcentury.  The range comprises a Cuvée Tradition in all three colours, Cuvée Spéciale, mainly from Syrah and Carignan, with some carbonic maceration, but no oak ageing, making for spicy ripe fruit.  Réserve de Laurence is based on Syrah with some Carignan and Grenache, with a small percentage of élevagein oak, with some firm fruit.  Impatience includes 40% barrel ageing, including a proportion of new oak, and Cappus Monti comes from 60% Syrah with 40% old vine Carignan, all kept in oak for 10 months.  Impatience Blanc is mainly Grenache Blanc, with 20% Vermentino, with some oak and buttery notes on the nose, balanced by good acidity and sappy fruit on the palate.   For the moment, they do not produce Boutenac, but they have bought a five-hectare plot which includes 1.80 hectares classified as Boutenac but not yet planted.  They are considering Carignan and Mourvèdre. 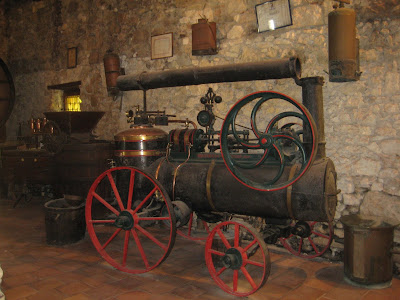 Christophe Gualco is the 5thgeneration of his family at Château Étang des Colombes.  The property was bought at the end of the 19thcentury and encompasses 117 hectares of vines, including some IGP as well as Corbières.  Christophe’s father, Henri, was a pioneer in the region, bottling his first wine in 1973, when Corbières was still a VDQS, and during the 1980s he developed a solid range of different wines and built a Bordeaux style barrel chai in 1986.  Christophe is following in his father’s footsteps.  He is energetic and enthusiastic and has done the Etudes de l’OIV which entails work experience in Chile, Britain, at Davis in California and Mendoza in Argentina.  He wanted a vision that was different, especially for marketing.

We tasted in a large caveau with various old foudres and vinous artefacts.  There was a machine that was once used against phylloxera that pumped water into the vineyards.   Étang des Colombes’ vineyards on the necessary fairly flat land.   An enormous chunk of tartrate crystals looked just like volcanic lava.  Our tasting included a lightly peachy Viognier, a rosé, which Christophe described as their produit phare,  of which they produce 60,000 bottles of Gris Colombes in an attractive and distinctive serigraphic bottle, from Cinsaut, Grenache Noir and a little Syrah, with some delicate fruit.  Bois des Dames Blanc is mainly old Grenache Blanc, with some Bourboulenc and aged, but not fermented in oak for eight months, while Bois des Dames rouge is based on old vine Carignan, with some Syrah and Grenache, with a rounded chunky palate. The Cuvée Tradition from equal parts of Syrah and Grenache, with 20% Mourvèdre, aged in cement vats, has tapenade, spice and a streak of tannin, making a solid mouthful.  Bicentenaire was created for the 200thanniversary of the property as a wine estate in 1981.  It comes from 40 – 55-year-old Grenache and Carignan and a little Mourvèdre, with six months ageing oak and is a ripe, rounded mouthful of wine. 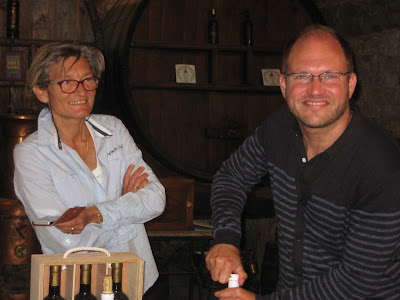 This is a large property on the outskirts of Lézignan.  We were greeted warmly not only by Frédéric Bousquet, who nicely opinionated,  but also by his black Labrador, Manique.  I think he worked hard to live up to his name!   Frédéric’s father, Jean-Noël, began working with one hectare of vines aged 17, and has consistently bought vineyards on good land, so that they now have 130 hectares in some 250 plots, in five villages around Lézignan.  Pierre Vialard has been the winemaker since 2006, while Frédéric studied agriculture in Toulouse and then did stages in California and Ribera del Duero and finally worked in Canada.  They lost their original cellars in the floods of 1999 and then took over this old spacious négociant cellar.  Frederic observed that they never use carbonic maceration;  when his father arrived, ‘les places étaient prises,  all the places were taken’, so he looked for a different orientation and bought an égrappoir, so that all their grapes are destalked.   55 of their 130 hectares are Syrah, as it give elegance and rondeur and they also have some old Carignan.  They aim to keep the authenticity of each terroir with their wine-making and only use pigeage for extracting flavours.  Notre richesse is our vineyard, but it is complicated to have so many plots.

Their range is logical, an entry level, Grandes Vignes, in all three colours, that they described as modern Corbières; Vieilles Vignes and a more traditional style, and Terroirs, with three different terroirs, Terres Rouges. Grès de Boutenac et Fleur Elysée, and finally two varietal wines, Carignan and Cinsaut.   As you might imagine, an extensive tasting followed and the highlights included la Pège, a Vin de France and pure Carignan, vinified without any wood.  The palate was firm and spicy with a sympathique rustic note.  Terres Rouges, which Frédéric described as la patte, the footprint,of Grand Moulin, come from a vineyard where the soil is really red and the wine is 80% Syrah with Grenache Noir, of which one third is given 12 months in oak, making for rounded spicy fruit.  He looks for elegance, buvabilité and matière.  Grès de Boutenac is 60% Mourvèdre with 40% Carignan, both late ripening varieties that perform well in the terroir of Boutenac.  One third of the cuvée spends twelve months in oak and the firm is structure and tight knit with a fresh finish.  Fleur Elysée is also a Boutenac, a selection of the best Carignan, Syrah and Grenache, vinified in demi-muids with regular pigeage.  It is not made every year and the young wine promises well with ripe fruit.  Lastly there was a pure Cinsaut le 49.3, - the vines were planted in March 1949 - and the wine was beautifully fresh and rounded and a lovely note on which to finish. 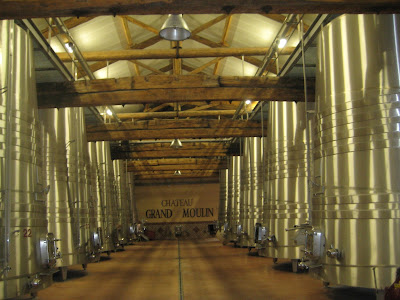 The Chinese have arrived in the Corbières.  Château la Bastide was bought in 2015 by Min Yu and in his absence, is very efficiently managed by the bright and vivacious Mme Nan-Ping Gao.  She has lived in France most of her life, run a restaurant in Montpellier for a number of years and speaks impeccable French.  First, we talked about the history of the estate. The château was built in 1770, and the property originally housed 100 people, as well as 40 horses, with last horse leaving in 1967.  These days they are very proud of their mechanical harvester.  It was always a viticultural domaine, an autonomous bastide, with its own forge and provided the livelihood of several families.  They still have the original stone vats as well as the enormous traditional foudres that are no longer used.   Claude Gros has been the oenologist for the last  18 years.

There are sixty hectares of vines all around the château, on terraces and the former riverbed of the Aude.   All the vineyards have been replanted, so they have none of the very old vines on which other estates pride themselves.   I really enjoyed the simple Tradition, a blend of Syrah, Grenache and Mourvèdre, aged in vat, making for an appealing balance of dry spice and fresh fruit, with a fresh note on the finish.  Other cuvées include Exubérance from equal parts of Grenache and Mourvèdre, L’Optimée which is 80% Syrah with 20% Grenache, with ripe cherry fruit and Eidos which is the opposite, coming from the best plots of Syrah, with peppery fruit. 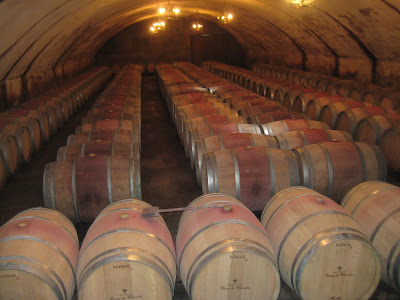