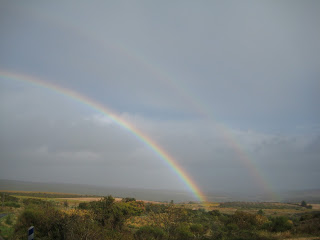 Another property, that sadly did not make the cut, as I had to cull words for Wines of the Languedoc.    And tomorrow I am off to Chablis for three weeks, so apologies, there will be a bit of a lull in the Languedoc.

Domaine la Rouviole is the next-door neighbour to Clos Centeilles, - Rouviole is the name of the stream that separates the two properties - where Franck Léonor has been making wine since 1998.  He has 16 hectares of which just two and a half are La Livinière – it is a question of having the right proportions of the various grape varieties. They are all cultivated organically.   His cellar is in what was once the old bergerie, which housed 200 sheep as well as several chickens.   Franck was first a school teacher, and he does have the air of an absent-minded professor as he talks about his wine.  Syrah is his main variety and he enjoys its aromatic complexity with notes of black fruit; Grenache Noir gives balance and drinkability and should not be too heavy.  It resists drought much better than Syrah.  Essentially Franck makes a Minervois and a Minervois La Livinière, choosing the best barrels for the cru. Usually the blend is about 75% Syrah to 25% Grenache Noir, with some firm oak, initially balanced by fresh fruit. On my last visit Franck demonstrated just how well his wines age, when our tasting included 2012 and 2011 and finished with a 2004, that was just reaching its plateau in the autumn of 2016. 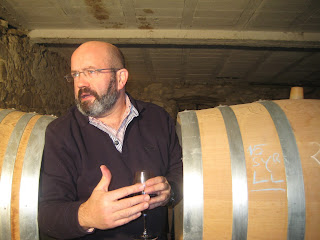