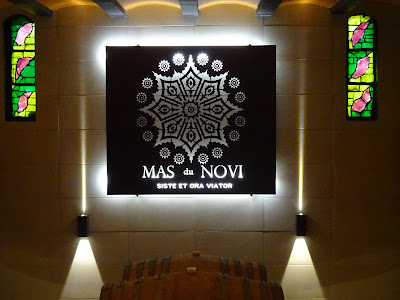 Mas de Novi is a rather smart domaine outside Montagnac, in the Grés de Montpellier  It has been quite a few years since my last visit and I have to say the wines have improved significantly.  One reason for that is a change of winemaker.  The estate is owned by Jean-Claude Palu and his wife Michèle, who bought it for a song over 20 years ago, and then spent a considerable amount of money restoring the property and streamlining the cellar.  In M. Paul’s absence, Mas de Novi now run by Thierry Thomas, who deeply committed to the estate, for his very first job was at Mas de Novi, and then he went onto work elsewhere before returning to Mas de Novi in 2012.  One of the first things he did was to convert the vineyards  to organic viticulture.  They now have 42 hectares in production, all around the cellars, as well as another 5.5 hectares coming into production. The terroir is argilo-calcaire, clay and limestone. 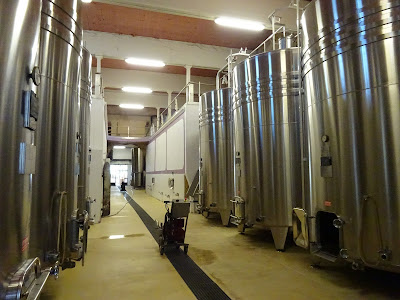 The cellars are well equipped, with stainless steel vats, as well as some cement and stone vats that are useful for blending, and a small barrel cellar for white wine, and a larger one for red wines, with barriques and demi-muids.  Sulphur is used as little as possible, at the end of the fermentation for white wine, and after the malo-lactic fermentation for red wine.  And hygiene is meticulous. 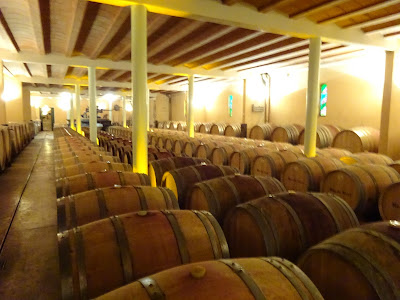 There was originally a Roman villa on the site and then it became a dépendence of the lovely Cistercian abbey of nearby Valmagne, from 11th century until the Revolution.   I was taken for a drive through the vineyards up to a viewpoint that looks towards the Mont Ste Claire in Sète, the abbey of Valmagne and the village of Villeveyrac.  And then we adjourned to the welcoming tasting caveau. 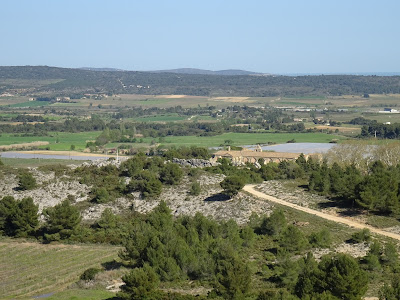 2017 Lou Rosat, Languedoc AOP - 9.00€
A blend of Syrah, Grenache, Cinsaut and Carignan.  However Thierry is not very keen on Carignan, observing that it performs better on schist.  It is also better with a carbonic maceration, but then you have to drink it quite quickly.  I begged to differ.  The grapes for the rosé are pressed  so quite a pale colour.  The 2016 was even paler, following the fashion for the palest of rosés.  I was quite surprised to learn that a powder made from garden peas can provide an effective  fining agent to remove colour.   The palate was crisp and fresh, with a dry finish. 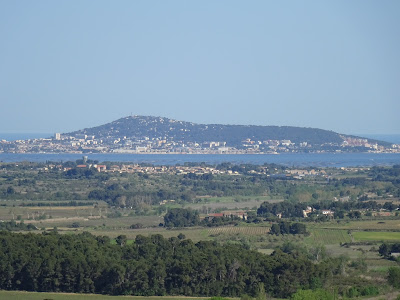 2017 Lou Blanc, Pays d’Oc, Chardonnay - 11.00€
A pure Chardonnay given an élevage on its lees in stainless steel vats, as well as three to four hours of skin contact.   The skin contact was the consequence of a press breaking down when it was full of Chardonnay grapes and they found they liked the result, so now do that regularly.  The nose was rounded and lightly nutty, with a ripe palate and fresh acidity.  There is no malo-lactic fermentation; they want to retain acidity, and also in the rosé.

2014 Chardonnay Pays d’Oc - 17.00€
with the fermentation and 12 months ageing in barrel.  Lightly golden colour. Firm nutty nose; quite rounded, with ripe fruit and some texture and firm acidity on the finish.

2015 Chardonnay - 17.00€
The same wine, but with quite a vintage difference, in that it tasted much more structured with a tighter palate and fruit.  I much preferred it.

2016 Lou Mazet, Pays d’Oc - 9.00€
From of equal parts of Cabernet Sauvignon and Merlot, kept in vat.  All destemmed as they harvest by machine, and the machine has an optical sorting device, a tri optique, which eliminates a lot of unwanted grapes, leaves, insects and so on in the vineyard, before the fruit gets to the cellar.  Deep young colour.  Quite rounded with some  firm tannins.  Pretty easy drinking.

2015 Le Chemin de Novi, Grés de Montpellier - 11.00€
A blend of 60% Syrah and 40% Grenache.  in stainless steel vats.  Good colour.  Quite a rounded nose, with some dry leathery notes on the nose, and on the palate some ripe fruit and a certain warmth on the finish.

2014 Prestige, Grés de Montpellier - 13.00€
85% Syrah with 12% Grenache and just 3% Mourvèdre, the salt and pepper, observed Thierry.   You really miss  the Mourvèdre if it is not included.  12 months élevage in fut. Quite substantial and rounded on the nose and palate, with ripe spicy fruit and a fresh lift on the finish.  Well made with ageing potential and fresher than the O de Novi, perhaps because of the Mourvèdre. 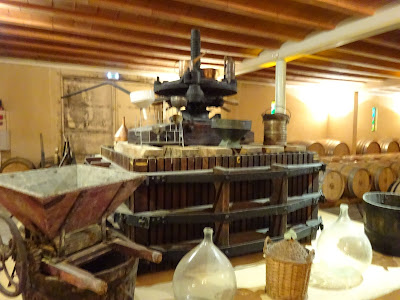 Then to show how well their wines age, Thierry explained that they have a policy of keeping back some bottles, 15,000, to release when they are ten years old.

2008 Novi, Grés de Montpellier - 21.00€
with 85% Syrah, 12% Grenache and Mourvèdre, from 40 year old vines, with some élevage in vat, and also in barriques and demi-muids. The colour is beginning to evolve, as is the nose with some cedary notes, making for a pleasing maturity with rounded cedary fruit on the palate.  Thierry described  2008 as a classic vintage

And then I spotted a sign on the wall of the tasting room - Alcohol because no great story ever started with somebody eating a salad!

Our tasting finished with 2011 N de Novi,  Grés de Montpellier at 55.00€  A pure Syrah that was planted after a fire in the garrigue nearby in 1994.  The first vintage was 2008.  The density is 6000 pieds per hectare, with a yield of a natural 15 hl/ha, without resorting to a green harvest.  The wine spends 18 months in new demi-muids.  The palate is rounded and spicy, with supplie tannins and some satisfying texture.  Thierry admitted that for 2012 he has included some Viognier, so that will be interesting to taste in due course. 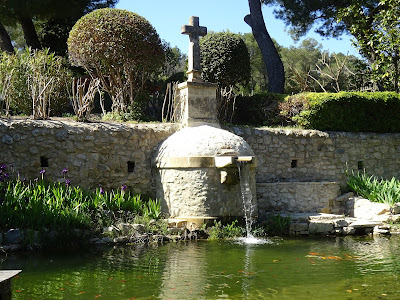