Simpsons - From the Languedoc to the Garden of England 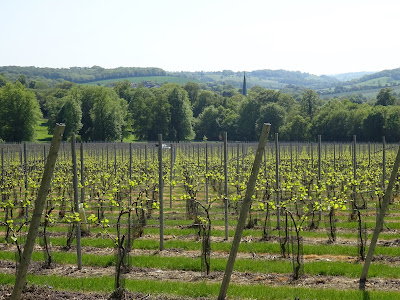 Ruth and Charles Simpsons already run a very successful winery in the Languedoc, Domaine Ste Rose, in the Hérault village of Servian, which concentrates particularly on varietal wines, as Charles would say, Old World wines using New World methods.  But  family reasons, such as their daughters’ education, have brought them back to England and to the village of Barham, near Canterbury, where they have planted 30 hectares, of Chardonnay, Pinot Noir and Pinot Meunier.   Their first vines came into production in 2016, for a Chardonnay, Roman Road.  The vineyard is indeed on the old Roman road. 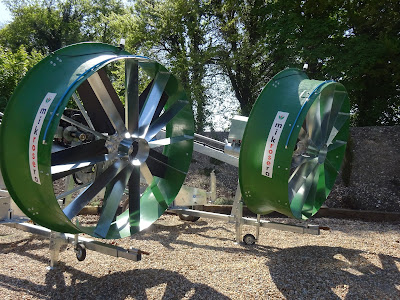 I went to visit a couple of weeks ago.  It was one of those gloriously sunny days when  the weather is almost too good to be true, and it made a grand day out from London.   First, we admired a piece of equipment sitting in the yard that is designed to protect the vines from frost by causing the air over the vineyards to circulate.  An arm goes up and oscillates, blending the cold air with less cold air, and causing a constant movement.  They had used it the previous week, after suffering severe frost damage in 2017. As Ruth said, we simply cannot afford not to do something about the frost.   I have yet to see anything like this in Chablis. 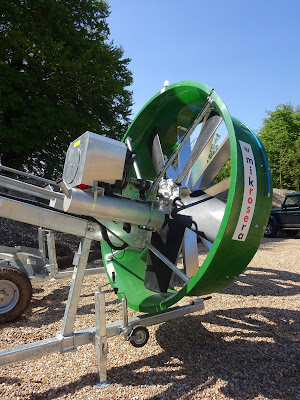 First of all, Ruth took us to look at their oldest vineyard, on a chalk slope outside the village. They have several clones, twelve for Chardonnay, and seven each of Pinot Noir and Pinot Meunier, making for diversity in the vineyard and planted either on Fercal or 41B rootstock, which are the only choice, with such a high calcium content in the soil.  The composition of the first  vineyard is 50% Chardonnay with 30% Pinot Noir and 20% Pinot Meunier, but in the second vineyard the balance will shift to 50% Pinot Noir. They prefer Pinot based sparkling wine.    They are not aiming for organic viticulture, but do want to be as sustainable as possible. 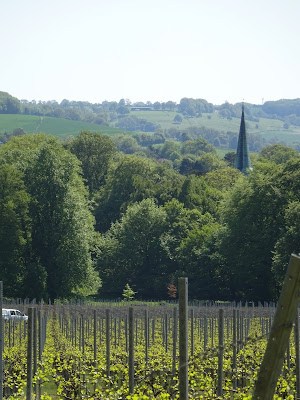 The land had been farmland for a long time, first arable and then more recently used for pigs. The Pinot Meunier, which buds later, is planted in the more frost prone pocket at the bottom of the slope and they had left what they called a ‘sacrificial arm’, a third arm, in case of frost damage, which is then removed after the risk of frost has passed.  There is grass between the rows, and they use weed killer between the vines.  Ruth talked about the planting which took three days in 2014, but in 2016 was much quicker with GPS guidance.   Rabbits are the main pest; they love green shoots, so they protect the vines with netting.  Pheasants are another problem.  The local shoot feeds the pheasants until harvest time, and then the pheasants come scavenging in the vineyards,  but happily then the shooting season opens shortly afterwards.   And we could see the second vineyard, Railway Hill,  in the distance, above the village of Barham.    Here they have planted wind breaks, of fast growing Italian alder.

Back in the village we looked at the cellar, constructed from two large barns, in time for the 2016 harvest.  They will be disgorging some rosé in June, but otherwise it will be another year before there is sparkling wine available.  They have not invested in neither a bottling line – they prefer to bottle everything at once, to avoid any bottle variations - nor in a disgorging machine   The cellar is well equipped with stainless steel vats of varying sizes.   They are planning a dedicated press room, explaining that they have a two-week window of opportunity get everything picked and pressed; in contrast at Ste Rose, it takes six to eight weeks, with so many different grape varieties.  Three pressings are the absolute maximum you can achieve in one day.    They had initially thought there would be a break between the two harvests, but with climate change, that is becoming less obvious.

A new piece of equipment to me was a large bag that allows for oxygen-free pressing.  A bag that Is identical in size to the bag in the press replaces the oxygen with nitrogen as the press operates.  With oxygen-free Chardonnay, you obtain citrus notes, but with some contact with oxygen you obtain more tropical notes.  Charles would like to combine the two.  With the standard champagne press, you do not actually know to what extent the juice is oxygenating, but with the bag you can control the oxidative process, and it is all enclosed, including the juice tray under the press.  It is called the Inertys system.  The nitrogen can be sucked back into the bag so that there is a constant exchange.   Charles is convinced that this adds to the complexity of the wine. 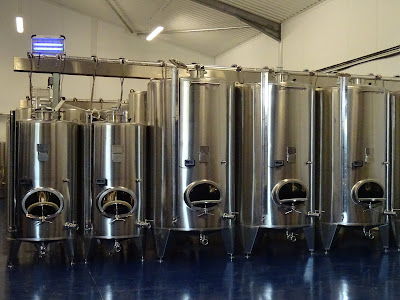 And there is a very smart tasting room, with a helter skelter slide to take you down into the cellar, with wine tourism in mind. I have to admit that I was chicken and declined to be one of the first Masters of Wine to try it out.   We tasted the 2017 Roman Road, (£22.95) which is certainly a very convincing Chardonnay, maybe a Chablis lookalike, but with a note of England.  Thirty per cent of the blend spent four months in 2-year-old barrels, that had previously been used for Roussanne at Domaine Ste. Rose.  It was lemony and floral, rounded with balancing acidity and a stony note and had only recently been bottled.   It promises well and I will look forward to enjoy the Simpsons’ sparkling wine in due course. 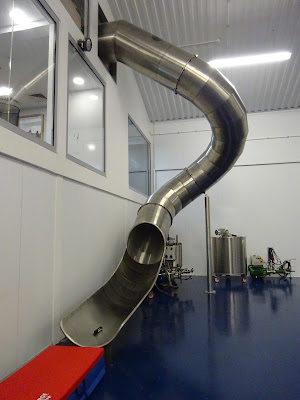 We also talked about wine tourism and the development of a group called The Garden of England, consisting of seven local wine estates, namely  Simpsons, Gusbourne, Chapel Down, Hush Heath, Squerries, Bidenden and Domaine Evremond, the Taitinger estate.  Charles explained that they would like to encourage local tourism; the neighbouring  population is enthusiastic in a way that simply does not happen in the Languedoc. An initial order to the Barham village stores sold out in minutes, causing Charles to observe that it may be easy making wine in the south of France, but it is a lot more difficult to sell, whereas the opposite is true of England.

And for more on English wines do consider A Celebration of English Wines by Liz Sagues, just published by Robert Hale in Chichester.  Cover price £16.99.  It captures the essence of English  wines, combined with some evocative photographs. 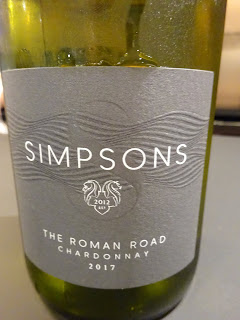