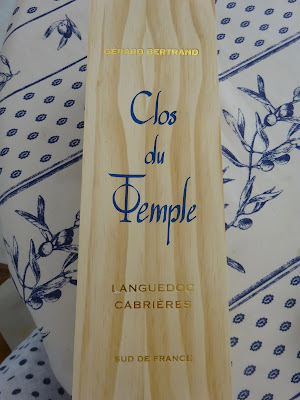 Gerard Bertrand’s latest rosé was released this summer.   It is no ordinary rosé but a wine that is as finely crafted as any good red or white wine.   And it comes with an elevated price tag which is hard to justify for any new wine, and certainly for a rosé.   Gérard already produces a considerable range of rosés from his various estates, some quite simple; some more complicated  (see my earlier rosé posts) but this is intended to be the pinnacle at the top of the pyramid.

There is no doubt that the wine has been made with enormous care and attention to detail.   It comes the hills above the village of Cabrières, a village long recognised for the quality of its rosé.  If you want to try a much more accessible wine, the brand of the cooperative of Cabrières, L’Estabel, is well worth checking out.   I visited the vineyards above Cabrières when Jean-Claude Zabalia owned Domaine des Deux Rocs, which has subsequently been incorporated into Gérard's vineyards.  Domaine du Temple was the neighbouring estate, and now also part of Gérard’s holding in Cabrières.  The vineyards are in a stunning position, at 240 metres, close to the Pic de Vissou, with vines planted on schist soil.   They are farmed biodynamically.   The grape varieties are Grenache 40%,  Cinsault 35%, Syrah 15%, Viognier 3% and Mourvèdre 7%, including some old vines, Cinsault planted in 1959, but the rest are more recent.   Gérard explains that he has conceived this wine like a temple, Grenache provides the foundations.  The columns are formed by the Cinsault; the walls are Syrah and the architecture is Mourvèdre, while the roof is provided by the Viognier.    Or more poetically in Gérard's own words : ‘J’ai conçu ce vin comme un temple : les fondations sont constituées par le Grenache, les colonnes sont formées par le Cinsault, les murs c’est la Syrah, l’architecture c’est le Mourvèdre et le toit c’est le Viognier »

The grapes are hand-picked at sunrise, to benefit from cool temperature and pressed at 5ºC; the juice is clarified and fermented, with each variety fermented separately in a vat, except for the Viognier and Cinsault which are co-fermented, and then aged in new French oak barrels for six to eight months, with some bâtonnage, initially three times a week, and then once a week until February.  However, that depends on the weekly tasting.  The blending takes place on a fruit day in April.  And they have made just 9000 bottles for the first vintage.

As you can see from the photograph, the bottle has pretensions to a work of art, with a square base and a pyramid indent, and some gold lines that are apparently intended to recall the hillsides of Cabrières.

And what does the wine taste like?  I shared it with winemaking friends and a salade niçoise.  I am told that the main dish for the smart press launch in Paris was lobster…..The colour is very pretty and enticing.  Initially the nose was quite delicate, but the vanilla notes of new oak became more noticeable, and were very obvious on the palate.   There was some weight and structure, but I felt the vanilla overwhelmed the fruit.   And that the oak integration was less successful than for Gérard’s hitherto most expensive rosé, La Villa from Domaine la Sauvageonne in the Terrasses du Larzac.  If given the choice, I would prefer to drink that.

I wondered if Viognier really adds to a rosé with its quite strong peachy flavours.   And I also wondered whether the wine would taste better with some bottle age.   I was very generously sent two bottles, so I intend to keep the second one for next summer and see how it has developed.  But you do not usually expect a rosé to improve in the bottle.   That for me is another reason why the high price tag is hard to justify.  If you buy a bottle of fine white or red wine, you expect some evolution in the bottle; you are paying for something that will improve with bottle age if you chose to keep it.   Rosés are usually designed to offer fairly instant and delicious gratification, and then decline as they age.  But in this instance, maybe not.

The price is an interesting issue?   And raises various issues.   Why assume that rosé should always be cheap and cheerful?  Indeed, it is not.  SachsaLichine has already proved that in Provence with his Whispering Angel from Château d’Esclans, but even his pricing is not as ambitious as Gérard Bertrand’s.   Rosé deserves to be taken seriously.  It is a difficult wine to make, some say more difficult than either red or white, as the colour is so complicated to control.  It must not be too dark, nor so light as to look like white wine.   It requires meticulous winemaking.

And Cabrières is the perfect choice of vineyard for an aspiring stellar rosé from the Languedoc.  And do not forget that the Languedoc produces much more rosé than Provence, so it is high time for Languedoc rosés to take the limelight and not be compared unfavourably with Provence.  As Gérard Bertrand is demonstrating, they have very much their own style of rose.    At 190€ this wine is certain to be talked about. 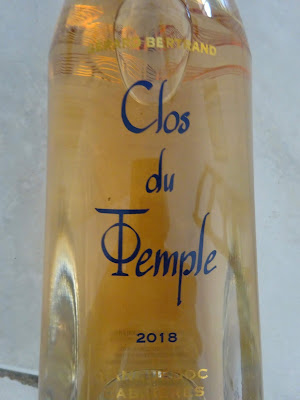 Bob Rossi said…
This is a fascinating piece. I was prepared for a high price, but still was shocked by the price when I saw it. And after reading your description, I can't imagine anyone buying it based on the quality. The oak part would turn me off right away. Many years ago I visited a cooperative in a village in Provence where we were staying. They made a very good, simple, cheap rose. Then we tried their attempt at a higher end rose; it was pricier (but still would probably cost about the price of Bertrand's only if you bought 3 cases), and had a more elaborate label. But the wine was dreadful. All you could taste was the oak. So I thing we bought some of their regular rose.
The other thing that turned me off by the Bertrand rose is the use of Viognier. I love Viognier when properly made, but I find it so assertive that it can ruin a wine if it isn't done right. It's one of the few grapes that can stand out in a blend even at something like 5%. I don't think it belongs in rose. But what do I know? I'm not a winemaker.
11 September 2019 at 14:27

Rosemary George MW said…
Good thoughts - very interesting to have your point of view. I think Viognier can sometimes be too powerful in a blend, be it white or rosé. And as you say, often simpler is better.
11 September 2019 at 16:38

tomfiorina said…
Rosemary, David Cobbold, one of two English writers at the blog 'Les 5 du vin', wrote recently about two, well-aged rosés from my wine cellar. Both were from The Château des Estanilles vineyard in Faugères (an appellation that I know you know well). The older of the two, a 2007 Rosé M' was made by the then owner of the property, Michel Loison. He sold it to Julien Seydoux in 2009, who made the second wine, a 2011 'Inverso rosé'. Our comparison tasting of these two wines showed that they had aged remarkably well. David attributed this to the intelligent use of oak in their ageing, plus the evident longevity of rosés made from the Mourvédre grapes.
12 September 2019 at 14:34

Rosemary George MW said…
I
And I have also drunk a five year old Bandol rosé from Pibarnon which was very youthful. I am optimistic that the Clos du Temple will age. I might have to keep my bottle longer.......
12 September 2019 at 15:36