The 2019 vintage in the Languedoc - some observations 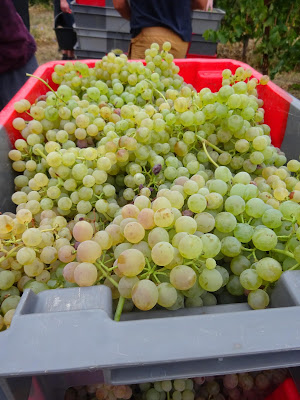 As I write in the middle of September, the harvest is by no means finished.  Some rain interrupted had the picking a few days ago, on 10th September; some friends have picked earlier; others later, and others have hardly started, and I have heard quite mixed reactions. 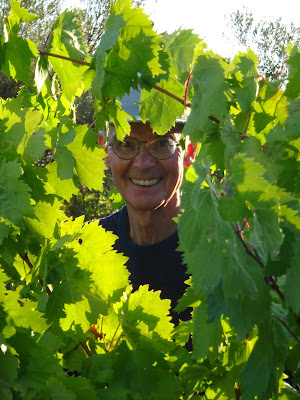 Yesterday morning I was up early to help with the harvest of Vermentino at Mas Gabriel.   By lunchtime a problem came to light - not enough vat space.   This vineyard. which had not produced any grapes the previous two years, as a result of frost, and then mildew, was generous and abundant.  I have never seen so many grapes on some vines - Deborah thought the yield about 40 hl/ha when usually they are lucky to obtain 25 hl/ha   And the quality is good, as Peter poetically put it, 'beautiful and bountiful'.   Although he had suffered from sunburn in some of his vineyards at the end of June, the damage was not as bad as he had initially feared. 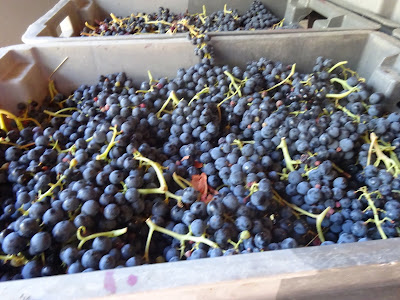 At la Grange des Bouys Stéphane Monmousseau was picking his Carignan the previous week - he favours an earlier harvest than Mas Gabriel and here the yield was good, but not excessive, and the grapes were beautifully healthy.   There is something wonderfully satisfying about picking ripe healthy grapes. 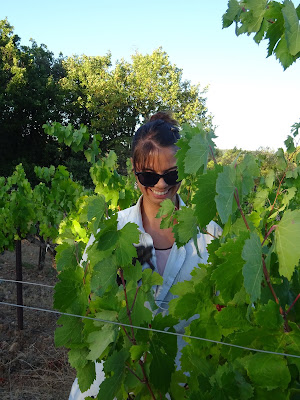 In contrast at Seigneurie de Peyrat, they were lamenting a small harvest, from the combination of sunburn and the drought. 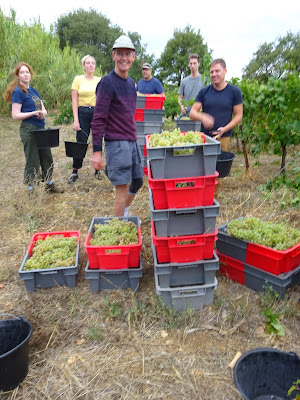 Isabelle Mangeard at Clos des Nines near Villeveyrac has had just 80 mms of rain since March.  She made the observation that normally she would expect 1.3 kilos of white grapes to give her one litre of juice.  This year it has taken 2 kilos, vividly illustrating how much smaller than usual the grapes are, with so much less juice.   But she is not complaining about the quality.   And the fermenting juice of her white wine was rich and fruity. 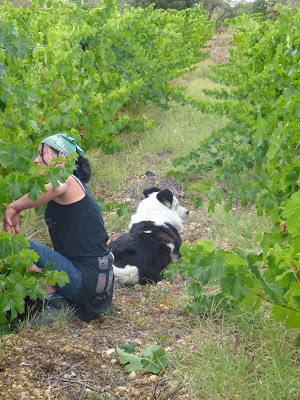 Lidewej van Wilgen at Terre des Dames  talked about this year’s harvest.  'The strangest year ever'.  A very dry summer and the vines are stressed, making for irregular ripening, but then a little rain just as the harvest was about to begin, woke the vineyard up.  When I saw her last week, she had picked her white grapes, in the dark, starting at 5.30 am, when the grapes are still cold, only 10ºC.  She talked about playing poker with the rain;  you mustn’t panic.   More rain was forecast and she was hoping to get the Syrah picked before it came, as the skins are thin and can split;  Grenache is thicker, and the rain would give it a bit more welcome juice. 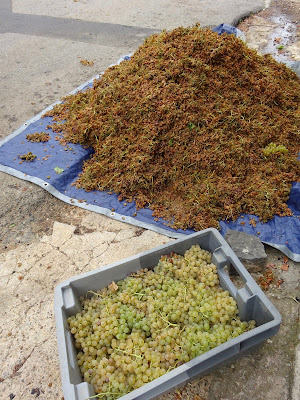 Continuing this post a few days later as it pours with rain in the Languedoc   I think we have had more rain today, Sunday 22nd September, than in the previous eight months of the year.  Lidewej is relieved; she has picked all her Syrah, with its thin skins, so that leaves some Grenache and Carignan, both with reassuringly thick skins.   She will have to wait for the vineyards to dry out before starting picking again.

My friend Catherine at Mas d'Alezon in Faugères has hardly started picking.  Despite the heavy rain this weekend she was surprisingly relaxed. 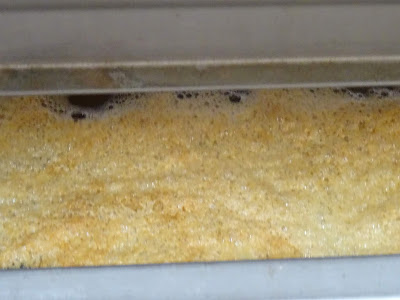 The effect of  carbon dioxide in the press protecting the juice from oxidation. 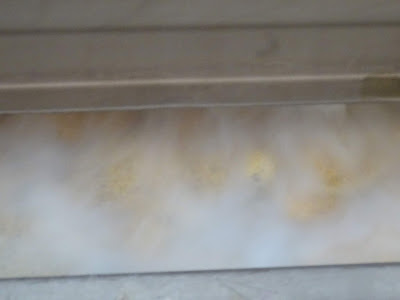 Jacques Boyer at Domaine la Croix Belle in the Côtes de Thongue has picked his whites and rosés, but does not think his red grapes are fully ripe yet.  He made an interesting observation about the proportion of sugar to actual juice.  Some vignerons are assuming their grapes are ripe as there is sugar, but for many people there is not much juice this year,  thanks to the drought, and the acidity is concentrated as well as the sugar.  So the flavours are not really ripe.   Jacques is patient.  And the rain today will probably help, as fine weather is forecast for the rest of the week.