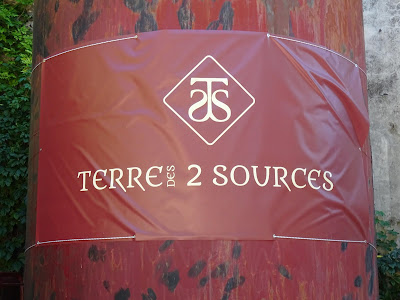 I am always thrilled to meet people who are at the beginning of their Languedoc journey and that is what I did last week.  A New Zealander, Kirsten Creasy had got in touch, saying please come and visit her property up in the hills near Ganges, north of the Pic St Loup.   This is a part of the Languedoc that I rarely  see, so Kirsten’s invitation was the excuse for a grand day out.   We drove home through the dramatic Gorges de l”Hérault and past St Guilhem-le-Désert.

The original name of the property outside Montoulieu between St. Bauzille de Putois and St Hippolyte du Fort was Domaine da la Devèze, but Kirsten has preferred to rename it Terre des Deux Sources.  It is an historic estate, with Roman origins and remains, including a well, and there are indeed two springs on the property.  Also the new ownership is a partnership, Kirsten with her American husband, Glen, provide the winemaking and viticulture expertise while Rémi and Hélène Taillerfer have business and administrative skills.  The previous owners, Marcel and Claudette Damais arrived here from Algeria in 1963 and their son has reached retirement age, so it was the moment for them to sell.

There are 35 hectares of vines, all around, with fifteen different varieties altogether, with apology for a list but it illustrates the diversity of the region.   So for whites - Sauvignon Blanc, Ugni Blanc, Marsanne, Roussanne, Viognier and Vermentino.  And for reds, Cinsault, Grenache, Syrah, Aramon, Auban, Alicante, Carignan, Cabernet Sauvignon and Merlot.  The Aramon and Auban are to be pulled up and replaced with Mourvèdre, and also Chenin Blanc and Grenache Blanc.   Kirsten enthused.  The 15 varieties are not a headache, but an opportunity.  There are also missing vines to replace.   Kirsten is particularly enthusiastic about this part of the Languedoc; this is where she wanted to make wine as it is the coolest part of the region, with enormous diurnal differences, as much as 20ºC.  It is not unknown for the thermometer to reach 38ºC in the height of summer, and to drop to 18ºC at night.  Essentially they chose the region for the water and the altitude, seeing it as a buffer to climate change.

Kirsten knows the south of France well; she has worked extensively throughout the region, from Corsica, Provence and Roussillon, as well as the Languedoc, as a flying winemaker, and also in South Africa and South Africa.  She has also lived in Australia, where she met Glen and taught at Roseworthy College.  And when they went back to New Zealand she had a tiny vineyard outside Christchurch.  But then they decided to uproot and come to France.  And they actually signed for their property in December 2018.  However the previous owners were very happy for them to make wine in 2018. 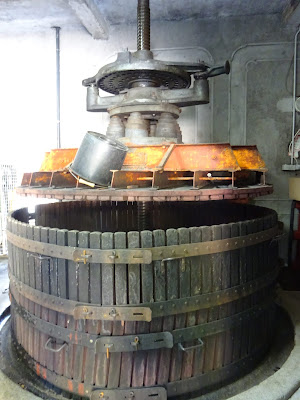 We looked at the cellar.  The first thing you see is an enormous basket press - it dates from 1890 and it takes three strong men to operate it.   And it would be impossible to move, such is its weight.   They also have a smart new pneumatic press.   There are concrete vats which Kirsten loves, and she has kept some of the old foudres.  There are smaller barrels too, but essentially this is an estate that needs investment.   Kirsten has her own lab - she is a qualified oenologist.

Glen talks about the vineyards; there are about 25 different blocks, which they are getting to know.   Ten of the 35 hectares are in the Terrasses du Larzac and the rest are either AOP Languedoc and IGP St Guilhem-le-Désert.  The area can be cold in winter, with snow in the Cevennes, but the vines must also be drought tolerant.  The soil is clay and limestone. They are less enthusiastic about organic viticulture, criticising it for the lack of versatility in vine management and preferring lutte raisonnée and the use of some appropriate ‘softer’ chemicals.  Wild boar are a problem; and birds too.

And then we tasted.  Kirsten explained her very logical range:  Amourette is the entry level, aiming to be fun and simple in all three colours.  Château de la Devèze Monnier is for the  appellation wines, all blends, red, white and pink.  Accords, IGP St Guilhem-le-Désert, is the name given to any particularly good plots, and will vary from year to year.   And there are currently two Terrasses du Larzac, made by the previous owners.

Kirsten observed that they were not able to chose when to harvest in 2018 and so the alcohol levels are higher than she would like.   However she felt that she had made a success of the whites, and on my initial tasting I would certainly agree. 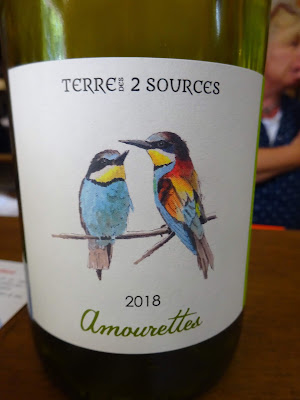 2018 Les Amourettes, Pays d’Oc - 7.50€
A cheerful blend of Roussanne, Marsanne, Ugni Blanc and Vermentino.  Lees stirred to give some mouthfeel  It was initially fresh and pithy, lightly floral with some texture.  There is a colourful pair of bee eaters on the label.

2018 Viognier Pays d’Oc - 8.5€
This has been kept in old barrels. 'I can’t stand new barrels', observed Kirsten and the fermentation was cool, followed by lots of lees stirring.  It was a refreshing style of Viognier, not oily, but with good salinity, with structure and elegance.  An understated subtle Viognier with lightly peach fruit and a dry finish

Château de la Devèze Monnier, AOP Languedoc  - 9.50€
Predominantly Roussanne, with some Viognier, and Ugni Blanc.  Ugni Blanc is allowed in an appellation wine if it has been planted before 1978.  Kirsten finds it a very good blending component, giving acidity and brightness.  The wine has less overt fruit than les Amourettes.  There is texture and complexity, with white blossom and a hint of peachy fruit and a long finish.  Ten percent has been in barrel, and there has been plenty of lees stirring. 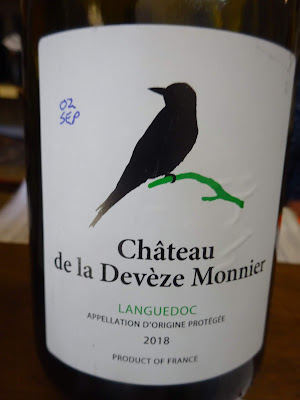 Accords, IGP St Guilhem-le-Désert - 12.00€
A blend of Roussanne, with 20% each of Viognier and Sauvignon Blanc, blended in January and bottled in April  80% was fermented in oak, with a percentage of malo, and all was kept in oak for a few months, which gives weight to the palate.  Quite a rounded nose with a hint of vanilla. Acidity, texture, peachy fruit.  Some citrus notes.

After the whites we went on to rosé.  The grapes were saigné rather than pressed, and Kirsten thought the wines too ripe and alcoholic for her taste.  Here she was not in complete control.  And the reds that she was showing were wines that she had blended and bottled but not actually made, so a tasting note would be unfair.  Ultimately the Terrasses du Larzac will be the top red wine, but for the moment it is very much work in progress.   We did however taste a barrel sample of some Carignan, which was fresh and ripe, with promising potential. The Carignan is amongst the oldest vines, bush vines from 1954. 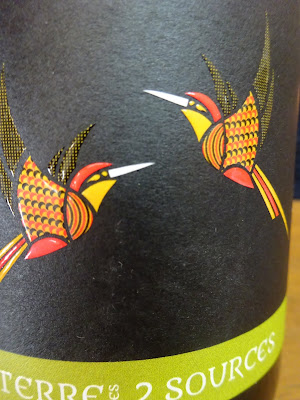 And then we adjourned for a friendly picnic lunch with local charcuterie in the shade of an old plane tree.

Unknown said…
This comment has been removed by a blog administrator.
21 September 2019 at 17:31