I have to admit to an initial confusion.  I had assumed that the Bonfils estate of St Pierre de Serjac, near Magalas, was linked with a négociant company that I had once visited in Sète.  But no, they are quite different.  As it happens the négociant, like so many négociants, stopped trading a few years ago.

This family company began its Languedoc story in 1962 when Jean-Michel Bonfils arrived in France from Algeria.  His family had had vines there.  He began by working for Domaine Lirou outside Béziers, and from that small beginning Bonfils has grown to include 1600 hectares with 17 estates.  The core of the vineyards are around Béziers and produce varietal IGP, notably Pays d’Oc as well as Côtes de Thongue, and they also own estates on la Clape, in  Corbières and the Minervois, and also in the appellation of Côtes du Roussillon.   Jean-Michel’s three sons, Laurent, Olivier and Jérôme,  now run the business, each with a particular skill, commerce, wine-making and viticulture, respectively.   And the third generation is starting to play its part.

They pride themselves that they control everything du cep au verre; from the vine to the glass.   There is a large wine-making facility in Narbonne and a large bottling plant in Mèze, with smaller cellars on some of the estates.  Altogether they produce 13 million bottles, with 40% sold in France. 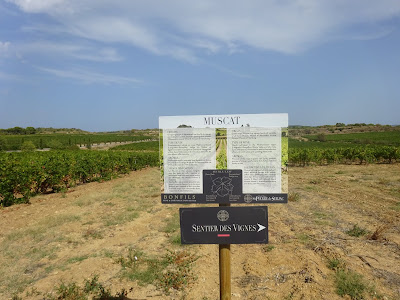 I was invited to visit St Pierre de Serjac, partly to taste some wine, and partly to see the other side of the business, namely oeno-tourism. In conjunction with a company called Domaines Demeures they are developing three châteaux in the Languedoc, offering facilities for conferences, some hotel rooms and also flats and houses for rent or purchase.   St Pierre de Serjac was one of the chàteaux pinardiers of the late 19th century, designed by the bordelais architect, Louis-Michel Garros.  To the English eye, it looks like a rather large ugly, Victorian pile.   It is a large complex, an extensive estate, with 80 hectares of vines, with 13 different grape varieties,  but also offering facilities for the tourist, including a restaurant,  spa, bicycles and vineyard walks.   It was bought in 2014 and was opened in 2016.   I was amused to find that the dairy company, Lactel, was hosting a conference there on the morning of my visit. 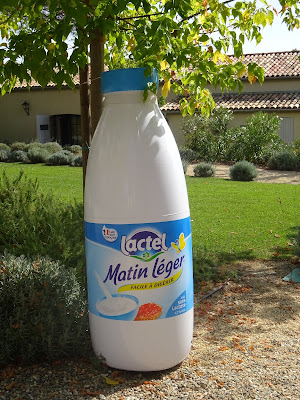 2017 Les Carrasses, la Serre, Languedoc - 25.00€
Château les Carrasses is a property close to the appellation of St Chinian, where they make IGP wines.  The name of the cuvée comes from a large greenhouse - serve being the French for greenhouse - on the property, designed by Gustav Eiffel.  The blend is Vermentino, Viognier, with a little Marsanne and some Grenache Blanc.  Each grape variety is fermented and aged separately.  There is some elevage in oak, for six to eight months, but never for all the wine.  Fermentation takes place in stainless steel vat.

Lightly oak on the nose.  Some floral notes with white blossom.  good acidity.  Nicely rounded on the finish.

2016 Château Capitoul, Oros, la Clape blanc - 15.00€
Bonfils have recently bought this la Clape estate and are working on turning it into another hospitality centre.  The white wine is a blend of Bourboulenc, Roussanne, Grenache blanc and Marsanne.  It was quite golden in colour, with a rich nose, with some salty notes and good acidity on the palate.  Half the wine had been kept in oak for a couple of months.

2018 Capitoul rosé, Languedoc - 12.00€
A blend of Grenache and Syrah, pressed.  Orange pink colour, with a dry nose.  Quite fresh and rounded with some weight and an elegant finish.  13º.

2018 Capitoul Oros Rosé, Languedoc - 15.00€
A new cuvée made for the first time this year from 80% Grenache with 20% Syrah.  A little colour;  orange pink.  Quite a firm palate with tight acidity and some raspberry fruit.  Although the grape varieties were the same, they said the different was more concentration and lower yields.  12.5º
I preferred the first wine. 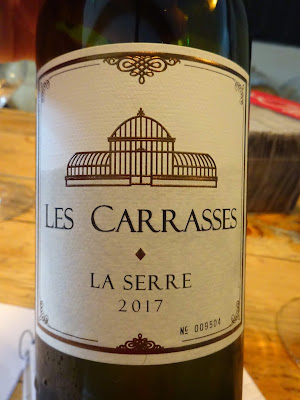 2017 Les Carrasses, la Serre, AC Languedoc - 25.00€
A blend of 60% Syrah and 40% Grenache. 11 months in barrel, but never for all the wine, and always with each grape variety separate.  Medium colour.  Nicely rounded.  No great depth but easy drinking, but expensive for that.

The wine making is controlled by a technical director, not a member of the family, and they have five permanent oenologists.

2016, Château Capitoul, Oros, la Clape - 15.00€
A blend of Grenache, 58% with Syrah 28% and Carignan 18%, with half the wine aged in barrel for three to six months.  Quite a light colour.  Quite a firm nose.  The liqueur cherry notes of Grenache.  Rounded with a steak of tannin and quite a rich finish.   La Clape is now recognised as nature reserve, Natura 2000, with a requirement to protect the fauna and flora.   Bonfils prefer culture raisonnée to organic viticulture and working towards Haute Valeur Environmental. 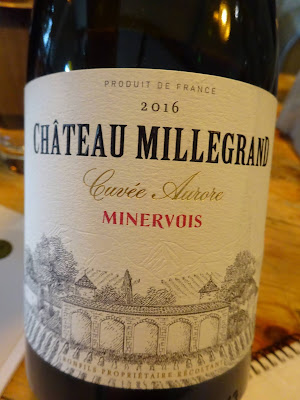 2016 Château Millegrand, Cuvée Aurore, Minervois - 20.00€
From a Minervois estate on the banks of the canal du Midi at Trèbes.  In the 12th century, it belonged to the abbey of Lagrasse.  Bonfils bought it in 2003.   The blend is 50% Syrah, 40% Grenache and 5% each of Carignan and Mourvedre.  Medium colour.  Fresh spicy nose. Medium weight.  A touch of oak.  Rounded with youthful tannin on the finish.

2016 Château Villerambert Julien, Opéra, Minervois - 10.00€
The nearby quarry at Caunes-Minerovis supplied marble for the steps of the Opera Garnier in Paris, and for that reason the previous owners of this property named the wine Opéra.  It is a blend of Grenache, Syrah, Carignan and Mourvèdre.  Quite a deep colour. Quite firm structured nose. with dry spice and structure on the palate.  A tannic streak and a leathery note on the finish.  In purchasing the vineyards of Villerambert Julien, Bonfils have reunited the two estates of Villerambert Julien and Villerambert Moreau.  However the château remains in the hands of the two families.

2016 Château Villerambert, Incarnat, Minervois - 18.00€.
A blend of Grenache, Syrah and Carignan with twelve months in wood.   Quite deep colour.  Denser oakier nose, and quite solid and rounded with ripe fruit on the palate..  Quite firm structure with the weight of the oak.  A rich finish, 14.5º.

2017 Château Vaugelas, Cuvée 140, Corbières - 18.00€
Their Corbières estate is at the foot of the Montagne d’Alaric, at Camplong d’Aude.   A blend of Grenache, Syrah, Carignan and Mourvèdre.  Deep colour.  Quite firm black fruit and tapenade on both nose and on palate.  Quite solid and rounded; quite intense. rich flavours from the oak, with a firm tannic streak.  14º.

2016 Château Vaugelas, Corbières, Excellence - 40.00€
Blend of Syrah, 55% with Grenache and a little Carignan and Mourvedre.   Deep colour; rich and intense and oak.  Solid and ripe, and certainly needing time.

Essentially the Bonfils range is in three tiers -
IGP varietals with the name of an estate
Appellation wines and then for the three estates of Villerambert Julien, l'Esparrou and Vaugelas, they have what they call a cuvée excellence, from the best plots, with some serious élevage in oak.

Château l’Esparrou is their Roussillon estate, which is very close to the étang, north of Canet-en-Roussillon.  Apparently it is surrounded by water, and in its previous history has attracted painters and artists, Dufy, Picasso, Cocteau, Maillot to name but a few. 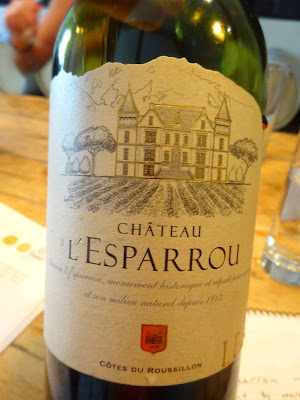 2017 Cuvée Léone.  Côtes du Roussillon - 12€
Quite a deep colour.  A mixture of warmth and freshness. with acidity and some supple tannins. Medium weight.

2015 Château l’Esparrou, Cuvée Excellence, Côtes du Roussillon - 39€
Again from the best plots, of Syrah and Grenache.  Deep colour.  Solid ripe nose, with quite firm tannins and oak on the palate. A heady 14.5º.  Bonfils bought the estate in 2010, and this is their first Cuvée Excellence from the estate.

And over an elegant lunch we tasted a Chardonnay, le Jardin,  from Domaine de Cibadiès, the head office, near Béziers, which was rounded and oaky, and a Pinot Noir from the same estate, with some red fruit.  2017 Château L’Esparrou le Castell was rounded and ripe, with tannin on the finish.  The estate also makes a Muscat de Rivesaltes and a Rivesaltes Tuilé.