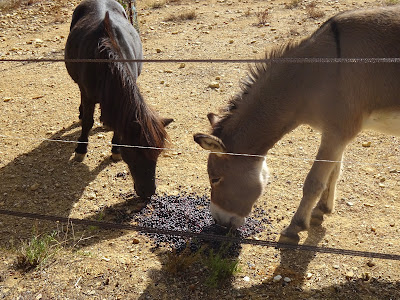 Lidewej van Wilgen at Terres des Dames, a wine estate outside Murviel-lès-Béziers, on the road to Causse-et-Veyran tells her story very eloquently.   She was working as an advertising executive in Amsterdam, when it was time for a change.   She and her husband enjoyed fine wine, and had what she called ‘a classical romantic idea about Bordeaux’, but realised that it was not right for them.  They heard talk of the Languedoc, as the New World of wine in France, and came and visited and loved what they saw.  And found an 18th mas with vineyards near by, fourteen hectares of vines, surrounded by garrigues.  it is a magical spot.

And Lidewej was captivated; when her husband returned to Holland, she stayed with her three daughters, making the shift from life in a capital city to the countryside, learning to be a winemaker, studying viticulture and winemaking.  She finished her studies in 2005 and then she had to find her own way, and develop her own individual style.  Recognition from The Wine Spectator in 2008 helped. 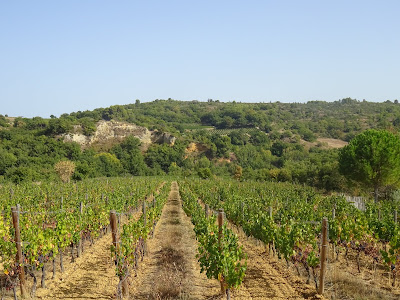 She talked about this year’s harvest.  The strangest year ever.  A very dry summer and the vines are stressed,making for irregular ripening, but then a little rain just as the harvest was about to begin, woke the vineyard up.  When I saw her, she had picked her white grapes, in the dark, starting at 5.30 a.m. when the grapes are still cold, only 10C.  She talked about playing poker with the rain;  you mustn’t panic.   She now hires a team of Poles to harvest for her; unlike other local options, they are reliable and work hard.    More rain was forecast and she was hoping to get the Syrah picked before it came, as the skins are thin and can split;  Grenache is thicker, and the rain would give it a bit more welcome juice. 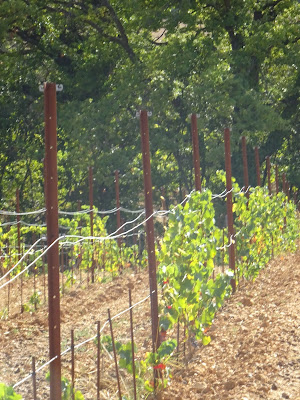 And then we went for a walk through the vineyards, which are farmed organically.  She has a vineyard of Mourvèdre, and talked about problems of choosing the correct rootstock.  161/49 was fashionable when she planted, but the sap does not rise properly.   And she had problems with the nursery selling her inferior vines.  She has some 70 year old Carignan that belonged to a cooperative member, who sprayed systematically, with the spray coming into her garden.  The only way to stop that was to buy the vineyard , which now giving good results.   There was a vineyard of very young vines; they are still fragile and need a lot of work by hand.  You cannot use an intercep, and with the dry summer they have needed watering, every couple of weeks, using a tractor with a water tank on the back.  The oldest vineyard is Alicante Bouschet, which gives her just  15 h/ha.  She was initially advised to pull it up, but she likes it, considering that it does add something to one of her wines.   Her pruning system is cordon royal, rather than guyot which is used for high production on the plains.  She keep the yield low and does some de-budding. 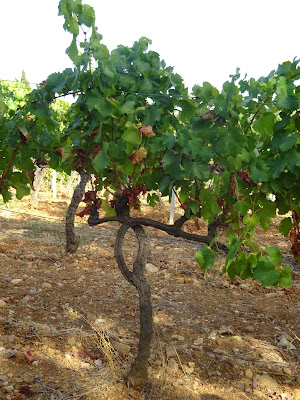 In the cellar, we saw her sorting table.  As Lidewej observed, you wouldn’t use rotten apples to make an apple tart, so why use mouldy grapes in your wine.  Last year, 2018, she rejected as much as 20% because of mildew; this year she has rejected almost nothing.  She destems her red grapes and leave the juice for longer on the skins, maybe as much as four weeks.  There is a large tronconic concrete tank and some standard concrete vats, painted red.  She has just bought a couple of amphora, but has never tried an egg.  She also has barrels, moving from small barriques to larger demi-muids.   A barrel costs 1500€ so she cannot afford a new one every year. 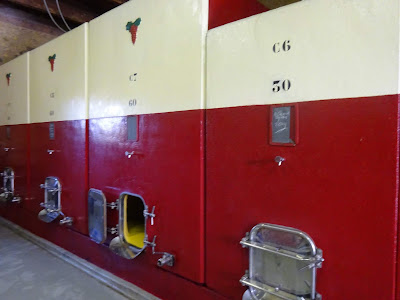 And then we adjourned to the terrace overlooking the vines to taste, observed by her large ginger cat, Louis.

2018 La Diva Blanche, Pays d’Oc - 18.50€
Lidewej favours a single varietal for her white wine, namely Grenache Blanc; she has tried blends but doesn’t like them. It is all fermented in oak, and stays in oak for a further six months.  The colour is light golden and the nose delicate, with a hint of well-integrated oak.  There is good acidity and some satisfying mouthfeel and texture, and a long finish.  Still very youthful, but with ageing potential.

There is also La Dame Blanche, with a smaller percentage of oak, but Lidewej had run out. 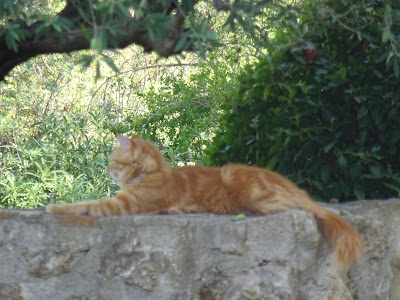 Lidewej admitted that before she became a winemaker, she had not been a lover of rosé, but she has changed her mind, making what she called a real wine.  For this is no ordinary rosé, but has been kept in a barrel for three months, which gives it weight and structure.  The grapes are pressed, a blend of 50% Mourvèdre, 30% Grenache and 20% Syrah.  the Mourvèdre ripens later so is fermented separately, while the Grenache and Syrah are fermented together, and all are blended together are fermentation and a small percentage put into oak.

The colour is orange pink, with a note of oak on the nose.  The palate is ripe, with some notes of vanilla, a rounded palate, with a firm tannic streak and a youthful finish.  It is a rosé with a difference, demanding food with it.

2017 La Dame Rouge, Languedoc - 10.50€
Grenache is the principal grape, with some Syrah and Carignan.   Lidewej hadn’t realised, but this wine could be St Chinian - Murviel-lès-Béziers is on the edge of the appellation - but she prefers not to get involved in local politics.  She wants a red wine that is juicy; she works gently in the cellar, avoiding harsh tannins.  Just 20%, part of the Syrah is aged in barrel.  Young colour, with fresh spicy fruit, and fresh red fruit.  Medium weight,  Long and fresh.  And served chilled on a rather hot afternoon.

2015 La Diva Rouge, Pays d’Oc - 13.50€
Future vintages are likely to be Coteaux de Murviel;  Mainly Syrah, with some Grenache and the old Alicante.   Medium colour.  All aged in oak.  Nicely evolved with some leathery notes and maturing fruit.  Some spice and a firm finish, with some tannin.  Lidewej observed that her winemaking has evolved, away from too much oak and too much extraction.   She favours a lighter touch. 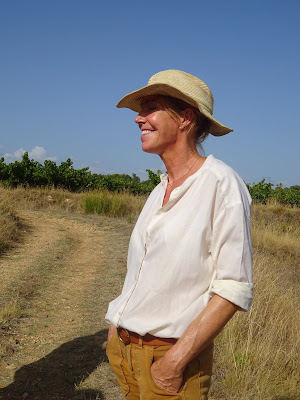 
A blend of equal parts of Grenache and Syrah.  which have spent three years in barrel.  Lidewej wanted to see what happened if you gave a wine from the Languedoc a much longer period for being in wood.  The colour was deeper than I might have expected and it still tasted very young, with red fruit balanced with some acidity as well as tannin.  There was potential for ageing; I would say powerful but elegant.   And a fitting finale to a convivial visit.
Email Post

emilynia said…
This comment has been removed by a blog administrator.
29 October 2019 at 00:56