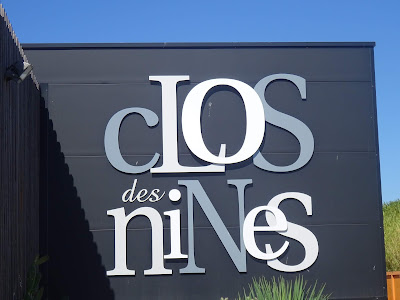 Clos des Nines has long been a familiar name, but it is only recently that I have managed a cellar visit with Isabelle Mangeart.

Isabelle talked about her now not so new venture.  Her first vintage was in 2003, and she taught me a new expression, je commence d’avoir un peu de bouteille, or some experience!.  She came to wine gradually.  She initially studied at the London Business School, where she met her husband, Christian, and he went onto work in the wine trade, with Bouchard Père et Fils in Burgundy, and Skalli and Gérard Bertrand in the Languedoc.  Their three daughters were each born in a different city, Paris, Beaune and Montpellier, as they gradually moved south.  Isabelle had always wanted to run her own business, and as she discovered wine, she decided to take a viti-oenology course in Montpellier.  First she worked for other estates, the Abbaye de Valmagne, Mas Mortiès and Domaine de la Prose, while she looked for her own vineyards.   She would have liked Pic St Loup, but it is a very closed community, and not easy to broach as an outsider.  She had quite strict criteria, the vineyards all in one block, in an appellation  and near a large town.   She was brought in the country, in champagne, and she wanted her daughters to have some of the advantages of city life.

And after a two and a half years search she found ten hectares near Villeveyrac, in the Collines de la Moure, a protected site lost in the garrigues, with two hectares of olive trees.  It is about 7 kilometres from the sea as the crow flies, opposite the étang de Thau, and the hill of La Gardiole protects the vineyards from any sea breezes.  The soil is mixed, some argilo-calcaire, and the Grenache is planted on sand, Cinsault on bauxite. The vineyards had belonged to a cooperative member who was retiring and were planted with Carignan, Alicante, Cinsault, Grenache, Syrah; half has been pulled up and replanted, introducing Mourvèdre, and also white varieties Grenache Blanc, Roussanne, Vermentino and Viognier.  Isabelle’s smart new cellar, built five years ago, is close to Gigean - she could not get planning permission near her vineyards, but here she has water and electricity and good communications.  It is only a 20 minutes tractor drive from the vineyards.    Isabelle cheerfully admitted that she is not mechanically minded and so employs a prestateur to do her vineyard work; however she tells him what do.  She has got to know her vines and her terroir; at the beginning she was very raisonnée and is now organic.

When I saw, Isabelle had just harvested her white grapes, but not yet her red.  So we tasted some fermenting juice, already blended, 40% Grenache Blanc, 30% Roussanne, 20% Vermentino and 10% Viognier, which promised well.  A small proportion, five out of 35 hectolitres will go into barrel, to continue its fermentation, and will be blended, after regular lees stirring,  with the vat aged wine in 8 months time.  Isabelle suffered from the heatwave, with sunburnt grapes, especially Mourvèdre and Carignan, on the poorer soils, where there is less vegetation.  The white grapes were burnt on the west side, by the hotter afternoon sun.  But the quality is good. 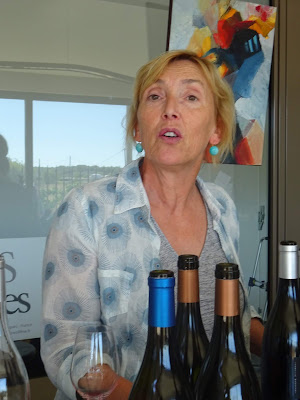 Isabelle is great fun to taste with.  She is bright and vivacious and nicely opinionated.  She is also a  member of the Vinifilles, a group of Languedoc vigneronnes with a great range of wine estates between them, from all over the region. 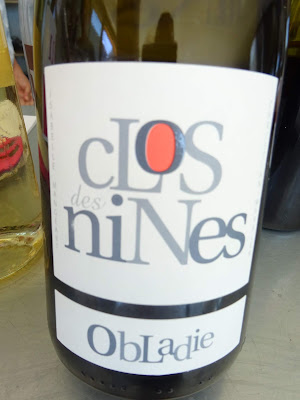 2017 Obladie, Pays d’Oc - 16€
I had to be reminded that the name comes from the Beatles song. Obladie, Oblada…….
A hint peachy on the nose and rounded satisfying mouthfeel on the palate.  A hint of vanilla and some white blossom.  Nicely rounded finish. Isabelle has just 90 ares of white varieties and makes just 4000 bottles.  She also has a négociant white wine, Pulp des Nines from Viognier, Vermentino and Muscat.

2018 Niño, AOP Languedoc - 9€
The name Nines, comes from their three daughters - nine being an affectionate term for a little girl.  And their last child is a boy, hence Niño for the rosé.  It is 80% Cinsault with 20% Grenache, pressed, with a pale colour, and on the palate, raspberry fruit, rounded and delicate, with a slightly salty notes.  It is a food rosé rather than a rosé de piscine.

2018 le Pulp rouge, Pays d’Oc  - 9€
A percentage of this came from bought grapes, as 2018 was a small crop.  Usually Isabelle has enough not to have to do that.  but she lost 50% of her crop to mildew last year.  The blend is Carignan with a little Syrah and Grenache, making a fruity wine, with a little tannin for easy drinking.  A cheerful pizza, pasta BBQ wine. 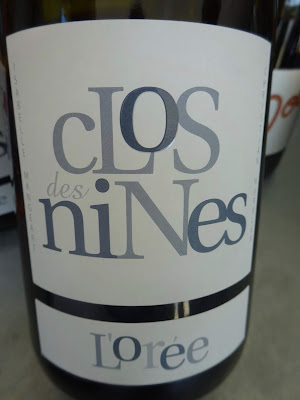 2017 L’Orée, Grès de Montpellier - 15.00€
A blend of Grenache with some Syrah and Cinsault, kept in vat and bottled in June 2018.  Medium colour.  A lovely garrigue nose, with spice and herbs.  Very fresh with an elegant finish.  A modest 13.5º.  Isabelle observed that she choses the harvest date so that her grapes are ripe, but the wine must not be heavy.  it is a question of balance.  She favours minimum intervention in the cellar, and a light hand as regards extraction. 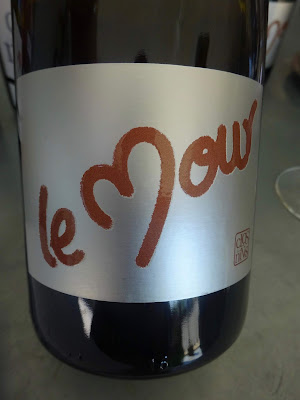 2018 le Mour, Vin de France - 14.00€
An unusual blend of 70% Mourvèdre and 30% Carignan.  Isabelle planted Mourvèdre, just for pepper, seasoning in the blend, as she put it, but with no intention of making a wine from it, but it was so good…. and she blended it with some Carignan vinified by carbonic maceration for some soft fruit.  Medium colour. Quite a solid, rounded nose, with notes of the garrigues.  Black fruit on the palate.  Quite dense and rounded with body, and a fresh finish.

And then she opened the 2016, expecting to be able to show us how well the wine aged.  2016 was a very hot year and contrary to expectations - Isabelle had not tried it for a while - the wine tasted younger, with a deep colour and more intense fruit, a richer palate and firmer tannins.  Tasted blind, I would certainly have thought the 2018 the more mature of the pair, and the more ready to drink, and indeed it was. 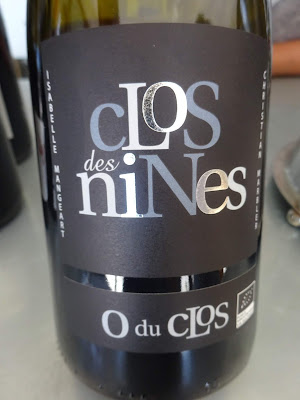 2016 O du Clos,  AOP Languedoc - 26€
Mainly Syrah with some Grenache, aged in barrel.   From her oldest 30 year old vines.  The Grenache vines are ageing well, but the Syrah has missing plants and is beginning to feel its age.   The wine was rounded with some oak and tapenade, with notes of vanilla and a fresh finish.

2017 Ouate, Raisins Surmûries  - 20€ for 50cl. bottle
Ouate is a phonetic interpretation of What!  From late harvest Marselan - just 350 vines, from grapes picked at the end of October, with 22º potential alcohol.  The fermentation, in a small vat, is stopped at 16º, by chilling, leaving 70 gms/ sugar.  It is all quite labour intensive, but well worth it.  The nose reminded me of a Recioto della Valpolicella with rich, rounded flavours of ripe black fruit, sweet, but with a dry finish.   It was a grand finale to our tasting.

But then came a taste of the olive oil, a peppery blend of lucques and picholines.   The olives are suffering in the drought - Isabelle has had just 80 mms of rain since March - and she made the interesting comparison that an olive tree protects itself, shedding its fruit in a drought, whereas a vine thinks of the future and does ripen its fruit, and then may keel over …… 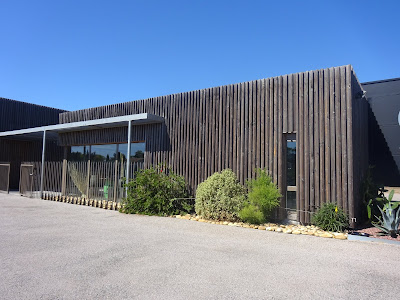 Bob Rossi said…
What a fascinating array of wines. I am especially intrigued by the late harvest. Unfortunately, I don't expect to ever see these wine unless we make it back to the area. And I think that with the US tariffs going into effect next week, it will be harder than ever to sell good Languedoc wines in the US.
11 October 2019 at 14:22