BACK TO MAS GABRIEL

I went back to Mas Gabriel later in the week, for some more wine-making experiences. This time it was my introduction to the art of pigeage or the pumping down the cap of skins into the juice. They have some Syrah quietly sitting in a concrete vat, which is given a daily pigeage, with an implement which looks a bit like a six-legged spider on a long metal stalk. You just push it into the cap, which breaks up relatively easy, but the repetitive movement becomes quite strenuous. Who needs to go to pilates if you can punch down a wine cap every day, I thought. The difficult bit is the fact that the ceiling of the cellar is rather closer to the top of the vat than you would like, so it requires a certain amount of dexterity to reach every point of the cap. 'If I win the lottery, I’ll lower the cellar floor', observed Peter. 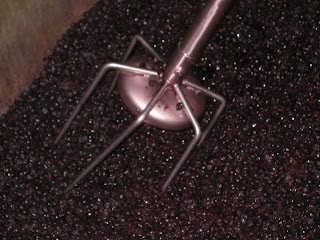 We were just about to start a remontage on another vat, when Peter and Deborah's oenologist arrived. He is Sébastien Pardaille from Jean Natoli’s laboratory in St. Clement de Rivière. He was running late, but the samples had already been drawn off the tanks and he immediately focussed on the wines in front of him. The white was rounded, with some fresh acidity, and still retaining a prickle from the fermentation. There is still about 15 gms/l sugar left. He advised a remontage and some bâtonnage, and he liked the aroma, a note of pears. 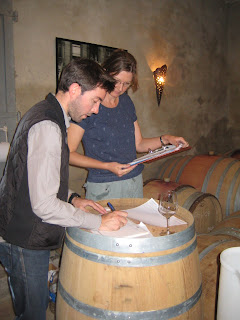 The rosé is a pretty pale pink, think pink grapefruit juice, as it is obviously still quite cloudy. Again it has some fresh acidity and attractive fruit.
Then he tried the free run juice of Monday’s Syrah – see previous posting. It is relatively supple, with some attractive peppery fruit, and good acidity. In contrast, the pressed wine, that I had helped press, was more tannic. Sébastien doesn’t want it to harden the free-run Syrah and advised keeping the two separate for the moment. It tastes quite ripe and confit. 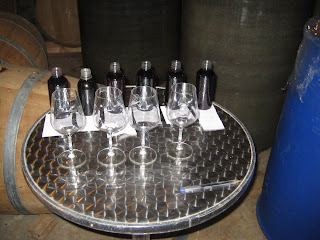 The Syrah on which we had just done a pigeage got the thumbs up – c’est excellent ça, with some lovely firm peppery fruit, and a deep colour. The grapes had been picked two weeks ago. Sébastien advised a pigeage every other day, and simply to wet the cap on the other days, to avoid any excessive extraction. And the temperature should be maintained at 25 - 27C°. You want to extract the matière gently, he said.

You could see immediately that the Grenache is lighter in colour and it has lovely berry fruit, but also has some sugar left, and needs some aeration, with some remontages, so that the oxygen helps the yeast to finish the fermentation.

And then Peter took the lid of the vat of Carignan that is being fermented by carbonic maceration. C’est bon, ça, enthused Sébastien. I thought the juice had a rustic chocolatey note on the nose, with some fresh acidity and raspberry fruit on the palate, and almost a refreshing juicy character. I peered into the vat; you could see a dense mass of whole bunches and stalks. And then a bunch of grapes was extracted for tasting. I would not have known that the grapes were actually fermenting – they looked extraordinarily in tact. I tasted one and it had a distinct prickle and still tasted quite sweet. And Sébastien reminded us that it is a fermentation of enzymes, not yeast – and that the grapes do not become dehydrated.

In contrast the Carignan with a traditional fermentation was more tannic, with some chocolate notes on the nose, and blackberry jam on the palate, and a little menthol, Sébastien suggested. He advised a daily remontage, enthusing c’est joli.

At this time of year he does anything from ten to sixteen cellar visits a day. Peter and Deborah only have seven different ferments to taste, while a large cooperative may have as many as fifty different vats. I was impressed by his speed and concentration, and perceptive tasting. 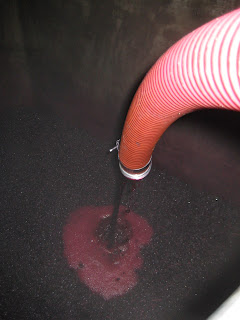 When he left we turned our attention to a remontage for the Grenache. This entails letting some wine out of the vat into a large bucket, and then feeding the pump with wine, so that it will pump wine on to the cap of skins. I went up the ladder and attempted to direct wine from quite a heavy plastic pipe all over the cap. This was easier said than done, as my arms were not long enough to reach the furthest corner of the cap. I was quite relieved when the long- armed stagiaire, Tom, took over, but it was fun to have tried. We finished by washing all the equipment with a high pressure hose – they say you need 100 litres of water to make ten litres of wine – and then it was time for lunch. 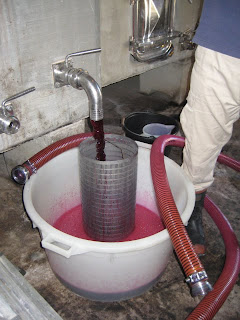 Peter and Deborah have acquired the relaxed rhythm of the Midi, so lunch was leisurely, some barbecued salmon and monkfish kebabs with garlicky tzatziki, accompanied by a delicious Swiss wine from the Vaud. And now what? A siesta? Yes, but we do have two visits this afternoon. The first group arrived as we were finishing our coffee. 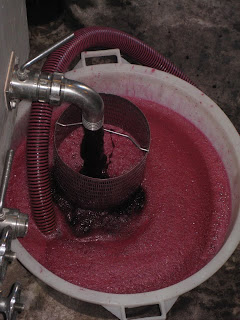