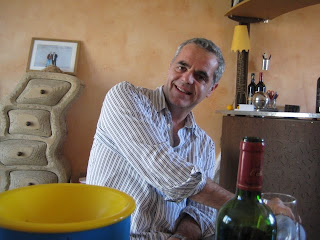 Pascal Fulla from Mas de l’Ecriture did not have a good day yesterday. He was in London for the tasting of his new agents, Dudley & de Fleury Wines, but unfortunately his wines were stuck in Lille, thanks to an inefficient transporter. But all was not lost. A quick ring around some restaurants and Roussillon came up trumps with three bottles of 2001 L’Ecriture, Pascal’s top cuvée from one of the best vintages of the decade.

Pascal makes three red wines in all, L’Emotion, La Pensée and L’Ecriture. He is a lawyer turned winemaker, with vines outside the village of Jonquières, which is part of the up and coming area of the Terrasses du Larzac. L’Ecriture is a blend of 70% Syrah, 25% Mourvèdre and 5% Grenache Noir, given twelve months in élevage in barriques.

The 2001 L’Ecriture had aged beautifully, developing what the French so elegantly called arômes tertiaires, or tertiary aromas. Medium depth of colour, with rounded spicy notes on the nose. The palate was beautifully elegant, subtle, with nicely integrated tannins, quite silky with notes of Mourvèdre, as well as some Syrah spiciness, with a long finish. Pascal said that one of his aims, when he began to make wine was to disprove the preconceived idea that the wines of the Midi do not age. On the contrary they age beautifully and this was a shining illustration of how rewarding it is to keep them. 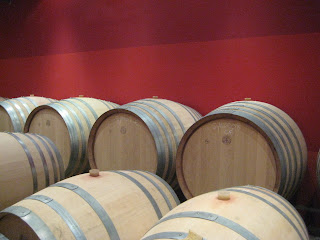 One of the prevailing problems of the Midi has been the lack of suitable cellars for keeping wine, both for élevage in barrel and also for storage in bottle. To do this, you need an insulated cellar, and the traditional cellar of the Midi tended to be a large barnlike building, rather than the underground cellars of Bordeaux or Burgundy. With the building of new cellars, not to mention the considerable improvement in wine-making techniques, the ageing of wine in barrel and bottle is now more feasible than it has ever been. And now there are umpteen examples of age worthy wines, both red and white, in the Languedoc. 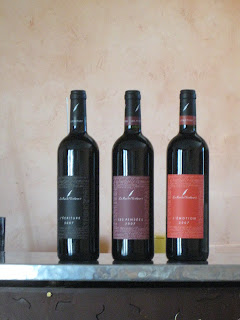 Louise Hurren said…
Hi Sara, thanks for going along - the tasting organsisers will be in touch to arrange for you to taste his other wines in due course. Best wishes, Louise
11 October 2010 at 10:10