A CELLAR RAT AT MAS GABRIEL 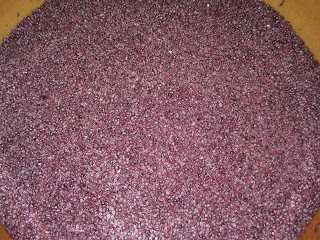 I had great fun one afternoon earlier this week, helping my friends Deborah and Peter, with their first décuvage of the harvest. It was Syrah from some three year old vines, so their first year of production. The fermentation had taken about five days, and then the juice was left on the skins for another five days or so, with some gentle pumping over and pigeage. The juice had been running gently off the skins all morning, so we were left with a half full vat of pretty wet grape skins, and even some whole berries. But it certainly didn’t occur to me that they would be quite so compacted and difficult to shift. We attacked them with a shovel and a long pronged rake, and Tom, their long-armed stagiaire tapped the mass from above, so that it gradually crumbled to the bottom of the vat. 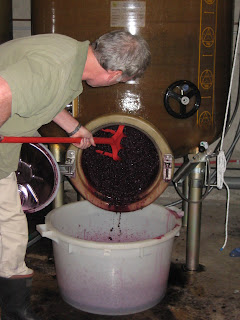 And we gradually filled the small basket press and Peter ran it at a low pressure, just one bar; the level sank so that there was room to add more grapes. It was all very slow and measured; I realised that you cannot rush wine-making procedures; everything takes its time. 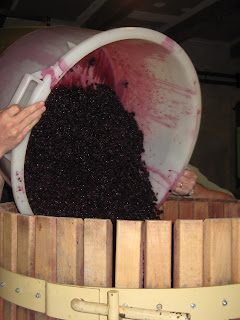 You also need to be aware of the presence of carbon dioxide; there was still a bit sugar left in the berries, so that there was carbon dioxide lingering in the vat, which in any quantity can have a stupour inducing effect, and indeed in large quantity can be lethal. Another experience never to be repeated is to sniff the bung hole of a fermenting barrel; the back of your nostrils feel as though they are being attacked by several very sharp needles. 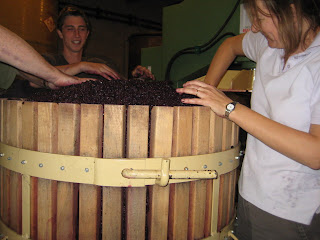 Needless to say when we filled the press up again, there were just two large buckets of berries left to fit in – rather than setting the press going again, it was a question of: Tom, off with your boots, a quick rinse of feet and on to the top of the press. After a couple of minutes of treading the level of grapes had sunk satisfactorily by a few inches and the remaining berries were added. Peter set the press going again and juice flowed out at a very satisfactory rate. It was being pumped into a small (3 hectolitres) vat, which Peter suddenly realised was too small; fortunately he had another even smaller bright blue vat to hand to accommodate the overflow. 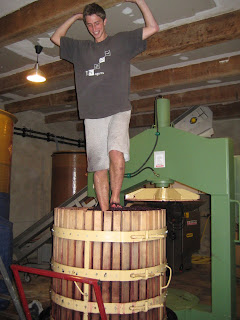 And the juice tasted good; you could taste a trace of sweetness, and it had more tannin and depth of flavour than the free run juice. Deborah and Peter felt confident that they would be able to add it to the free run juice, but the final decision depended on their oenologist, and also on the analysis. 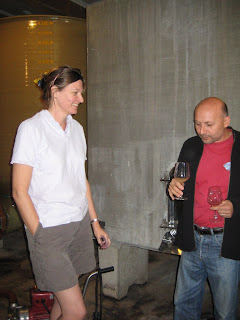 Meanwhile Angel from the Pézenas wine shop, Le Nez dans la Verre, appeared to pass the time of day and taste some of the fermenting juice, white and rosé, and then a barrel sample of the 2009 Clos des Lièvres, which will be bottled shortly. And then I had to leave. My elderly pink shorts were covered in splashes of wine that had turned the colour of blue ink – I had thought that the stains would have been red – and my hands were stained blue too. Lemon juice is the solution, but I felt rather proud to have les mains d’une vigneronne, if only for a couple of hours. 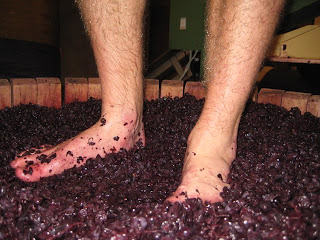