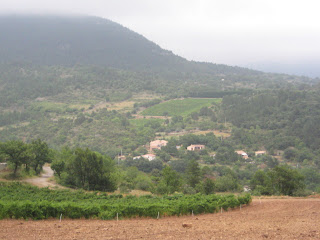 Mas Fabregous is one of the northernmost estates of the Terrasses du Larzac. It is well signposted out of the village of Soubès, with vineyards on steep hillsides outside the village, as well as a magnificent capitelle. Philippe Gros took us on a bumpy muddy ride round his vines – fortunately he has a sturdy four wheel drive vehicle, as otherwise I had visions of getting firmly stuck in the mud and the rain. But despite the inclement weather conditions you could still appreciate the stunning aspect of the vineyards.

More rewarding on a damp afternoon was tasting in the comfort of the cellar, with Corinne Gros.

2009 Croquignol, Coteaux du Salagou – 5.30€
Mainly Alicante Bouschet, with some Syrah and Grenache. They press the Alicante immediately, as for a rosé, otherwise it would give too much colour. Good deep colour. Quite firm dry rustic berry fruit. Medium weight. Ripe spicy fruit with a touch of sweetness and a soft finish. A slightly rustic note, but none the worse for that.

2006 Cuvée Trinque-Fougasse, Coteaux du Salagou – 9.30€
A blend of Merlot – 70%, with 30% Grenache. Half of the wine is aged in wood. This is much denser, more solid, with dry cassis on the nose and a sturdy plate, with rounded fruit and a tannic backbone.

2006 Cuvée Sentier Botanique, Terrasses du Larzac – there is a botanical walk just outside the village of Soubès, close to Philippe’s vineyard - 12.50€ A blend of Syrah 60%; Grenache 30% and Carignan 10% Half aged in oak
Firm fruit on nose and palate. Quite dense solid confit fruit with some firm tannins. The oak is not yet completely integrated.

When I visited in early September, they were anticipating their first harvest of white grapes, from just 2.60 hectares, including one hectare of Grenache blanc, as well as some Roussanne, Vermentino and Viognier, which will make the first white Sentier Botanique next year.

Then we tried a barrel sample of some Cabernet Franc – it had lovely fruit, with some intense cedary notes and quite a solid impact of oak. The vines were planted in 2004 and Philippe is very enthusiastic about Cabernet Franc in this cooler part of the Languedoc. He is not quite sure yet what he is doing to do with it – maybe blend it – or a single varietal. On verra.

And we finished with a barrel sample of 2009 Late harvest Grenache Noir, which smelt of rich alcoholic cherries, with a fresh sweetness on the palate, with acidity and some tannin on the finish. A potential 20º. And quite delicious.
Email Post

Joe said…
Rosemary, this was one of the wonderful estates Lits took myself and my partner to back in October 2008.

It was harvest time and Corinne and Guy very kindly showed us their vineyards and produced some of their wines to taste.

Send my regards to them and to Lits when you next get a chance!