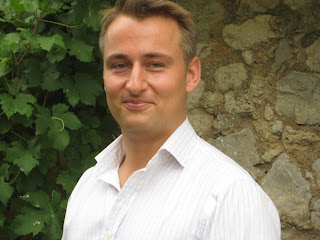 This is one of my favourite la Clape estates.  Eric Fabre was the technical director of Château Lafite for eight years and then decided that what he really wanted to do was make Mourvèdre in the south of France.  However, he still retains his bordelais approach to wine-making.   But firstly a bit of background, for this was one of the old historic estates of the Languedoc, when it was Château la Rivière-Haute and owned by Jean Ségura, who was one of the pioneers of white wine in the Languedoc.  I visited him in 1987 and at that time he was making white wine that was a revelation, with a depth of flavour that was unique in the region.  Sadly his heirs had neither his interest nor talent and the property went through a difficult few years, until Eric arrived from Bordeaux, to make his first vintage here in 2002. He has also bought the neighbouring estate of Château la Rivière-Basse and reunited the two properties under the name of Anglès.   A Monsieur Barthélémy Etienne d’Anglès had bought the land after the French Revolution.

Eric, and his son Vianney,  talked about what makes la Clape so special.  First of all there is the climate.   In spring the temperature warms up earlier, because of their proximity to the sea, compared to much of the rest of the Languedoc.   Consequently you can plant later ripening grape varieties, and be sure that they will indeed ripen.  This explains why Bourboulenc is so successful on la Clape, as it ripens even later than Mourvèdre, during the second half of October.  The maritime influence also moderates the temperature.  When it is 27ºC on a summer’s day in la Clape, it will be at least 30º – 31ºC in Narbonne, and they will always have a light sea breeze.  And even in summer, they get dew on the vines – we were standing on the grass outside the château, and I did suddenly realise that my sandaled feet were damp with morning dew.   Eric was adamant that it was not salty – they once had a storm that brought salt onto the vines and burnt the leaves.

The name La Clape derives from clapas, which means cailloux or stones in Occitan, and that is what the soil is.  The massif of La Clape is a masse calcaire of hard limestone, 17 kilometres by 7 kilometres, a compact area of vineyards, crossed by valleys that were carved out by water.  At Anglès they are two kilometres away from the sea.   Rain limits yields, with semi-arid conditions, and an annual average of  350 mm as opposed to 800 mm in Bordeaux.

And with his bordelais background, you might expect Eric to be interested in Cabernet Sauvignon, but he was adamant; ‘it was Mourvèdre that brought us here’.  Friends from Bandol had introduced him to the charms of Mourvèdre and so he set out to look for a good vineyard for Mourvèdre.  Cabernet Sauvignon ripens much too quickly in the Midi.  Altogether they have 36 hectares of wine, in one large block, including one third planted for white wine, when only about 10% of la Clape is white wine.  Other good white wine estates include Mire l’Etang, Rouquette-sur-Mer and Négly.  The appellation regulations demand a minimum of 40% Bourboulenc, with Grenache Blanc to make a minimum of 60% and they also have Marsanne and Roussanne.  Viognier is allowed up to 10% and other varieties are tolerated, Grenache Gris, Terret, Picpoul, Carignan Blanc, and also Rolle.  And for reds, they have Mourvèdre,   with Syrah and Grenache, and you can also have Cinsaut and Carignan, for which the permitted maximum is 30%.   Altogether la Clape consists of 1000 hectares of vines, with 38 producers, including two cooperatives that account for 20 percent of the appellation.  There are about 25 producers who sell their wine seriously, with another ten that are small family concerns.

La Clape is on the way to becoming an appellation in its own right, retrospectively for the 2012 vintage, and it will also be a cru of the Coteaux du Languedoc.  An appellation naturally entails stricter regulations.  The delimitation parcellaire has been done.  For the moment La Clape is red and white, with rosé under discussion for the appellation.  There is also an issue about the village of Gruissan, which is situated on the edge of the Massif, and logically part of la Clape, but historically it has been included within the appellation of Corbières, and Corbières does not want to give up Gruissan.  It sounds like an histoire de clocher,  as the French call local politics.

Eric still uses the same cellar as Jean Ségura, but he has modernised it, and only makes the red wines here; the whites are made at Rivière Basse.  The vats have drapeaux for temperature control; there are stainless steel as well as cement vats, and everything works by gravity.

And then it was time to open some bottles, and we continued talking as we tasted.   In the bordelais way, Eric makes a Classique for each colour, and a Grand Vin for red and white.  Classique accounts for 65% of the production , and the Grand Vin 35%, making an annual average of around 180,000 bottles.

40% Syrah, 40% Grenache, 20% Mourvèdre.  Medium colour.  Quite an elegant nose, with a leathery note and a touch of white pepper.  For Eric white pepper from Syrah accounts for some of the tipicity of La Clape.  It is fresh with elegant tannins, while the Grenache Noir gives red fruit.   Quite firm and leathery, with peppery notes on the palate, with a certain freshness on the finish.  2009 was a good vintage, and quite  a warm vintage.   Eric observed that ‘we were fascinated by the tannins here; and you can ripen the grapes properly here’ – the inference being that that is not always so in Bordeaux.  They decide the picking date according to the taste of the grapes.

Vianney studied oenology in Bordeaux and then did business studies in Champagne.  He has worked with his father, helping make the wine since the 2010 vintage, and looks for elegance and length in his wines.  The maceration lasts three or four weeks for the younger Classique red, compared to six or seven weeks for the Grand Vin.

2008 Grand Vin Rouge – 14.90€
55% Mourvèdre, with 25 – 30% Syrah and 15-20% Grenache.  A touch of Carignan – they have one hectare of it.  And the wine spends nine to ten months in barrels, 20% of which are new.  Apart from the Grenache that sees no oak.  Deep colour.  Quite a ripe oaky nose.  Quite black tapenade fruit.  Ripe sweet fruit on the palate, with good depth.  Still young oaky vanilla flavours.  Rounded silky tannins.  You need the tannin structure to enable the wine to age.  The Mourvèdre adds depth to the wine.  They have grafted some onto older 30 or 40 year old wines.  It likes to see the sea, and the vines must be old.
2011 Rosé Classique – 8.90€
80% Mourvèdre, with Syrah and Grenache.   Pressed grapes,  a delicate orange pink.  Delicate nose.  Very elegant, but with concentration.  The picking time is critical; for rosé they pick the Mourvèdre at the beginning of October, as opposed to the end of the month for the red.   Elegant dry rosé, with raspberry fruit.

2010 Classique Blanc
One year of élevage in vat.  50% Bourboulenc, 30% Grenache blanc with 10% Marsanne and Roussanne.  They are interested to see what the Viognier will produce; the wines would be five years old for the 2012 vintage, which is minimum age for vines for la Clape.

Light colour; salty mineral nose.  Eric equates Bourboulenc to a Mourvèdre blanc.  The acidity is low with salty mineral fruit, fresh stony notes and good depth.  Grown on calcaire coteaux, with galets roulées.  No skin contact;  the grapes are quickly pressed and the juice cooled to keep its aroma.  Bourboulenc is almost tannic, with a certain structure from the thickness of the skins, which enable it to resist the sun and also the humidity from the sea.  It is ripe when the skin is becomes more fragile.  The Marsanne and Roussanne are picked at the beginning of September.

2008 Grand Vin
40% Bourboulenc, with 20% each of Marsanne, Roussanne and Grenache blanc.  Fermented in wood, mainly 2 year old barrels, followed by élevage with some bâtonnage.  The Grenache, Marsanne and Roussanne go into wood together, while the Bourboulenc, which is picked a month later, is kept in vat.   There are three hectares of 80 year old Bourboulenc vines; it is a cousin of Malvoisie from Italy.  The final assemblage is done at the end of the élevage.  Hints of honey on the nose, with  iodine, garrigues, fennel and celery.  A certain matière, with a hint of vanilla.  Some weight, with an appealing freshness on the finish.

Light golden, rich and iodé.  Very good matière with a hints of fennel and a fresh finish.   Very intriguing.  And showing just how well the white wines of La Clape age.

A great visit, and an estate that is going far. 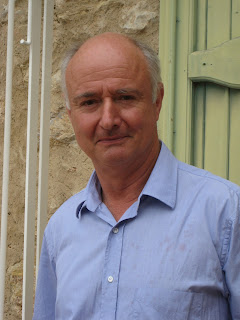