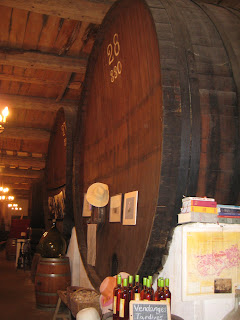 A chance encounter led to a visit to this Minervois estate outside the village of Pépieux, that was hitherto unknown to me, even though the top wine, Domus Maximus has won prizes in London.  It is the property of Frantz Vènes.  The origins of the estate are Roman.  Massamier comes from Maximus, and in the 18th century two properties were bought by a M. Mignarde, from whom Frantz is indirectly descended.  He took over the estate from his parents in 1998.  There are 70 hectares of vines, Syrah, Grenache, Carignan and Cinsaut, but no Mourvèdre.  And there is also some Cabernet  Sauvignon, and for whites, Sauvignon, Grenache blanc and Roussanne.  All the vines are all close by and lie at an altitude of 75 – 140 metres. 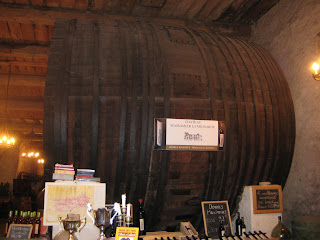 We were treated to a comprehensive tasting in a lovely old cellar, with the traditional foudres of the Languedoc.  They are magnificent to admire, even if they are no longer used.   And as an example of the growing Asian interest in wine, Frantz had a stagiaire from Korea, Yongnam Shin, who was helping to open bottles.   I was impressed by her command of French and her knowledge of wine.

2011 Cuvée des Oliviers, Coteaux de Peyriac – 4.70€
90% Sauvignon with Grenache Blanc.  Discreetly pithy.  Quite a rounded palate, with dry pithy fruit.  Medium weight.  Some skin contact in the press and a slow fermentation  lasting about a month at 15 - 17ºC

2011 Minervois,  Grenache Blanc – 7.40€
Some skin contact in the press for about a day, and élevage in vat.  Frantz will add some Roussanne when it comes into production.  A slightly resinous nose.  Quite intriguing.  Good acidity, with some hints of aniseed and a little honey on the finish. 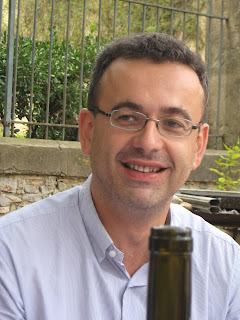 Frantz was excited; he had just signed a contract to purchase the adjoining wine estate of La Croix Martelle from Boisset.  ‘The house is in ruins, but the 20 hectares vineyard is 'magnificent’, and already converted to organic viticulture.    The negotiations were protracted, but Frantz in had already started looking after the vines.   His vineyards at Massamier la Mignarde are lutte raisonée.   He had already picked his white grapes on 12th September, and would be picking the grapes for rosé the following weekend, and the red grapes the following week.   He observed that some people, including most of the local coop members, had already finished their harvest; ‘they work by alcoholic degree rather than flavour’.  So far 2012 was looking good – they had had spring rain, and a wet end of August which had resulted in less drought stress than in some years.

2011 Domaine la Croix Martelle, Capfinada, Minervois rosé– 11.00€
Capfinada means elegance in Occitan.  One third each of Grenache, Cinsaut and Mourvèdre. Saigné, but quite a delicate colour.  Quite a rounded,  ripe nose and palate.  Quite vinous, and supple with a backbone.

2011 Cuvée des Oliviers rosé, Coteaux de Peyriac  – 4.70€
80% Cinsaut with 10% each of Grenache and Syrah.  Not picked too ripe, as they do not want an overripe rosé.  And they work with whole berries.  Harvesting is both by hand and machine, depending on the wine.  Quite supple with some strawberry fruit and a slightly stalky finish.

2011 Minervois Rosé Tradition – 7.40€
50% Cinsaut, 25% Grenache and 25% Syrah.  Saigné.  A deeper colour than the previous rosés and Frantz admitted that the maceration had been a couple of hours longer than intended.  Syrah is rich in colour, and makes for deeper coloured rosés. Some cherry fruit on the nose. Ripe and rounded, with more substance and body than the preceding two wines. 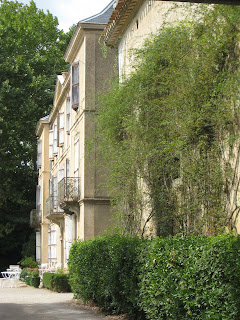 2011 Cuvée des Oliviers, Coteaux de Peyriac – 4.70€
A blend of 30% each of Carignan, Cinsaut and Cabernet Sauvignon with a little Grenache and Syrah.   Some cherry fruit on the nose, and a touch stalky.  Quite fresh cherry and cassis fruit on the palate.  Aged in vat and pretty easy simple drinking.

2011 Minervois Tradition.  – 7.40€
Nearly 50% Carignan with a quarter each of Syrah and Grenache, with a drop of Cinsaut.   Blending starts after the malo-lactic fermentation, and is fine tuned after élevage in vat.   Quite ripe with tapenade notes and black fruit on the palate.  A sturdy streak of tannin; structured with some ageing potential.  Quite a gutsy Minervois, as it should be.

2009 Expression, Cinsaut, Coteaux de Peyriac, 14.10€
A pure Cinsaut.  Quite a deep colour.  Quite structured, but with some appealing perfumed fruit, and a touch of spice.  Medium weight , with balanced tannins.  Frank explained that he works on remontages, (pumpng over) with some délestages, (untranslatable in English)  but no pigeage   (punching down).  Some wine terms are extraordinarily clumsy in English.   Fermentation takes place in cement vats, with a month’s maceration on the skins.  Cinsaut is very well suited to drought conditions so Frantz has planted more of it.

2008 Expression, Carignan, Coteaux de Peyriac  – 14.10€
Whole bunches are picked so that the grapes are fermented by carbonic maceration.  Élevage in vat. and then kept for a year in the cellar in bottle before sale.  Deep colour.  Perfumed, smoky tapenade notes on the nose and palate.   Quite ripe and perfumed, with some black fruit; quite a gutsy mouthful, but not tough.  The opposite of Cinsaut.  You work on the fruit, with carbonic maceration and aim for supple tannins.

2007 lo Molin, Cabernet Sauvignon
2007 is the last vintage of this wine.  Destalked grapes.  Three weeks cuvaison.  Some remontages.   Deep colour.  Quite a sweet cassis nose, but also with a green note.  Quite sweet and confit on the palate.  Cabernet Sauvignon had been planted by Frank’s grandparents in quite light soil, in plots where there was no water stress, and it is picked late, in October.   Personally I much prefer Midi grape varieties in the Midi.

2009 Cuvée Aubin, Minervois – 11.10€
Grenache dominant, with Syrah and Carignan.  12 months in second or third fill barrels.  Medium colour.  Quite a dry tarry nose.  The palate was more forthcoming, quite sturdy with some spice.  Quite a youthful vigorous wine.  Some potential. 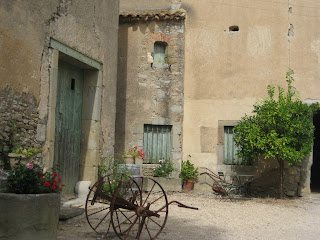 2009 la Croix Martelle, Minervois la Livinière, l’Onoviva – 13.14€
60% Grenache and 40% Syrah.   Aged in vat.  Medium colour; ripe more rounded nose.  Quite dry spice; quite firm fruit and tannin, with a touch of sweetness on the finish from the Grenache.

2009 la Croix Martelle, Belaya, Minervois la Livinière – 25€
Belaya is a contraction of bellaroya which means joyau or jewel in Occitan.  Grenache with Syrah and Mourvèdre.  The Mourvèdre was fermented in a wooden tronconique vat, and given some pigeage.   Quite a ripe rounded nose with ripe spice and a tannic streak on the palate.  Still very youthful and needing time.  An elegant finish.

2009 Domus Maximus, Minervois la Liviniere – 40€
75% Syrah 25% Grenache.  12 months ageing, half in new oak and half in one year old wood.  Deep colour. Quite a sold ripe nose.  Lots of tapenade and black fruit on the palate.  Sturdy dense and ripe, and quite confit.  Quite chunky tannins.   And a hefty 15º

This is the flagship of the estate, made for the first time in 1998; yields are low 30 hl/ha or less.  Frantz talked about the need to find the right balance.   They vinify by maceration carbonic, putting both varieties together.   The Syrah goes at the bottom of the vat, and the Grenache is never completely ripe, when the Syrah is fully ripe.   2009 was not necessarily a hotter year, but there was a lack of rain, resulting in some drought conditions.

2007 Domus Maximus – 58€
This was a cooler year, with less water stress and some rain at the harvest slowing things down a little.  Deep colour. Quite oaky on the nose; very leathery on the palate with some ripe fruit and more depth than the 2009.  Again 15º

2005 Domus Maximus – 84€  - 14.5º
A deep colour.  Closed nose.  Quite solid and rounded on the palate, with ripe fruit; quite sweet fruit, and a touch confit, but with some good balancing tannins.  Has started to evolve nice and should develop well.

2009 Tènement des Garouilhas  60€  - 16º!
60% Syrah with 20% each of Grenache and Carignan.   Vinified partly by maceration carbonique and partly fermented in barriques, and then 18 months élevage in wood, including the malo-lactic fermentation. Deep colour.  Quite dense and smoky on the nose.  Quite sweet ripe oak balanced with firm tannins.   Very young; very oaky very dense; very sweet and confit, and at 16º just a bit too heady for my taste buds.....Too much of a good thing!

2008 Gorgée de Soleil
Grenache Gris, picked in November.  Fermented half in vat and half in barrel, slowly during the winter, and bottled in the spring with 55 gms/l of residual sugar and 14.5º alcohol.  Amber orange colour.  Subtle notes of sherry trifle on nose and palate,  with some balancing acidity. 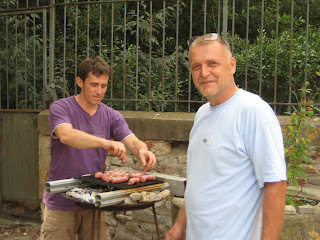 After that mammoth tasting, we were treated to a barbecue lunch, cooked by a couple of visiting Serbs, who were helping out in the vineyards.  We sat outside in the courtyard of the chateau.   First there were various Serbian saucisson to try and they proudly showed off their expertise with the barbecue coals, and talked of a special barbecue festival in Leskovac in Serbia.  Nor could we escape their Serbian Slivovitz or pear spirit - ça chauffe was French comment..........And further entertainment was supplied by the antics of Frantz’ young children. 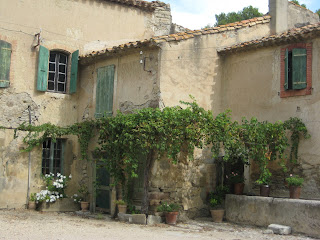