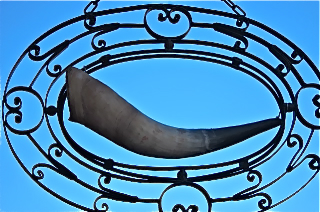 I missed the first showing of Ken Payton’s much hailed film les Terroiristes du Languedoc.  I was having too good a time tasting with the Vinifilles, so arrived 15 minutes before the start to find that the cinema was already packed to bursting point.  But a chance encounter with Ken the next morning and an apology on my part resulted in my very own DVD, so I was able to watch the film from the comfort of my own sitting room, with my tasting buddy, Lits, accompanied by some appropriate liquid refreshment – well actually here I must confess, that it was a bottle of Prosecco rather than Limoux, which just happened to come to hand.

So the twelve terroiristes are:

John and Nicole Bojanowski at Clos du Gravillas in St. Jean de Minervois – an American French couple, who delight in breaking the rules.   I always enjoy tasting with them, most recently at Millésime Bio.

Jon and Liz Bowen at Domaine Ste Croix in the Corbières -  I’ve met Liz a couple of times in London, and then was introduced to Jon at Millésime Bio.   Jon learnt his wine-making at Plumpton.

Emmanuel Pageot and Karen Turner at Domaine Turner-Pageot in Gabian – they are up the road from our French home.  He is French and she is Australian, and they met in Alsace, chez Hugel.

Virgile and Magda Joly of Domaine Virgile Joly in St. Saturnin.  Virgile created the first new wine estate in St. Saturnin for 50 years.  He has a small cellar in the main square between the church and the mairie, with the sign above the door saying, vigneron depuis 2000.

Cyril and Nadia Bourgne at Domaine la Madura in St. Chinian.  Cyril ran an estate in Bordeaux and now produces stylish wine in St. Chinian, including a white wine that nothing at all to do with the appellation.

Brigitte Chevalier of Domaine de Cébène in Faugères.  She comes from Bordeaux and has created her own small estate in Faugères, with some great vineyard sites.

Francois and Louis Adrien Delhon at Domaine Bassac in Puissalicon in the Cotes de Thongue.  I met their father Louis at the end of the last century, when he was very much one of the lone pioneers of organic viticulture in the Languedoc.

Eric and Vianney Fabre at Château d’Anglès in la Clape.  Yet more Bordelais.  Eric was the technical director of Château Lafite, but he was captivated by Mourvèdre.

Frédéric and Marie Chauffray at Réserve d’O  in Arboras – I have tasted Marie’s wines at the various Vinifilles tastings and very good they are too, but I have yet to do a cellar visit.

Jean-Pierre Vanel of Domaine Lacroix-Vanel in Caux – One of the new growers in Caux.

Thierry Rodriguez of Mas Gabinèle in Faugères – The one unknown,  to me. 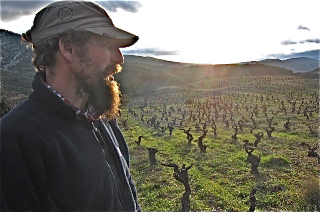 As you can see, they cover the whole of the Languedoc from the Pic St. Loup to Corbières and La Clape, ranging over a wide diversity of terroirs, though there are gaps, with nobody from the Minervois, nor from Limoux, or neighbouring Malepère or Cabardès .   And they are all supremely articulate.   Ken makes no secret of the fact that he chose them for their ability to express their challenges and talk about their work and their preoccupations – not just the quality of the next harvest, but also the future of their vineyards – will their children want to carry on?   For some that decision has already been made; for others it is too soon.  They talk about their terroir – and you will see some wonderful shots of different soils and rocks in weathered hands.

But I have two criticisms – at two and a half hours, the film is much too long.  It could do with an efficient pair of scissors to cut out some moments of longeur – you do not necessarily need to see some of the minute details.   And although the wine growers talked about their own individual terroirs, I felt that the film did not really explain how they all linked together.   Each presented a vignette, without really showing how they fitted into the overall terroir of the Languedoc.   The relationship between La Clape and the Pic St. Loup, or St. Chinian, and the differences, for example,  were not really explained.  Maybe a map was needed, showing the position of each vigneron at the beginning of each section, or indeed a short introduction and overview of the Languedoc to set the scene.  But there is no doubt Ken does capture some of the dramatic scenery of the Languedoc, with shots of the Pic St. Loup and the Montagne de l’Hortus, and the hills behind St. Saturnin, but at Château d’Anglès, you are given no clue as to the proximity of the sea

I loved seeing people I knew – there only one vigneron who I had not met before – and several of them I would count as friends, and it is always great fun to see your friends on the screen – but I wondered how much the interest would be retained of the average wine lover who does not have such detailed knowledge of the Languedoc.   But if you are hankering after some Languedoc sunshine on a cold winter’s evening in London, this could be the next best thing.

A DVD will be available shortly for purchase on line, and various showings are planned. mainly in the Languedoc  at the various wine estates, with a tasting, during May. 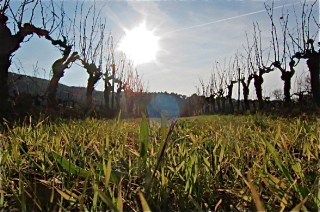