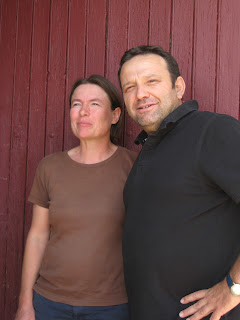 I’ve met Nathalie and François Caumette at various tastings, both in London and Faugères, but there is nothing as good as visiting wine growers chez eux, to get an impression of their work.  They live and work in a house on the edge of the village of Autignac, that was indeed once the old village haberdashers, hence the name of the estate and the theme of the names of their two cuvées.

Natalie is now president of the Faugères growers.  The family history is probably not dissimilar to many others.   François’ grandfather was brought up in the Aveyron, but came south and bought vines.  He joined the village coop, partly as he had no experience of wine making and also because he firmly believed in the socialist philosophy of the cooperative movement.  He had bought vines on the poor land of the hillsides, and dreamt of having vines on the plain.  It was hard work; yields were low from the hillsides of schist, and yet the coop members were paid the same, for quantity, regardless of provenance.  François’s father was an anaesthetist – it would have been a punishment to stay on the land.   And when the grandfather died in 1986, they could not sell the hillside vines; some were pulled up and some were kept as by then François was studying agriculture at Montpellier and specialising in viticulture.   Nathalie, meanwhile, came from Paris and studied in Montpellier, and that is how they met.  They quickly realised that keeping their vines with the coop, in this case,  the one in Laurens, was not a viable economic option, especially as the coop went bankrupt, so the only thing to do was to make their own wine.  And they now have 16 hectares of vines in the villages of Autignac and Laurens. 2000 was their first vintage.

We sat and tasted in what had been Francois' grandmother’s atelier de couture, or sewing workshop.   They spoke of how they learnt sur place.   Irrigation is not forbidden,  but there is no water.  The normal annual rainfall in Faugeres is between 500 and 600 mm, compared to Pic St. Loup with 900mm.  There really is a lot of variation in weather and soil   Nathalie gave me some figures for Faugères – 55 independent wine growers, or caves particulières, with 100 coop members, that account for half the surface of the appellation.  2000 hectares are planted, although 5000 hectares are delimited, in seven villages around Faugeres itself.   Apparently the eau de vie de Faugères was recognised before the appellation of  Faugères.

The cellar at the back of the house was very simple and functional, with stainless steel vats, and some cement vats, and barriques and demi muids.   And in the vineyard they are organic. 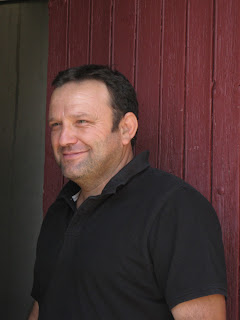 2011 Au Bonheur des Dames, - 7.20€
40% Mourvèdre with 60% Grenache.    Faugères must have at least 5% Mourvèdre in the vineyard, but not necessarily in the wine.  Aged in vat.  All handpicked and destalked.  Quite deep colour.  Quite alcoholic on the nose, quite rich and fleshy on the palate.  Some cherry liqueur spice from the Grenache and some supple tannins.  Very gourmande.

2011 Les Petites Mains, Faugeres
50% Carignan, 25% Grenache, 20% Syrah and 5% Mourvèdre.  No oak ageing for Les Petits Mains.  Deep colour. Quite ripe spicy fruit.  A touch leathery.  Lots of ripe red fruit with a streak of tannin and some acidity.  Ripe and fresh on the finish.  Nathalie observed that they have a lot of Carignan in their vineyards and it is Carignan that marks the wine.

2010 Les Petites Mains, Faugeres – 8.70€
A slight variation in the blend, with 50% Carignan, 20% each of Syrah and Grenache, and 10% Mourvèdre.  Quite a deep colour.  Ripe spicy on the nose.  A nice rustic note from the Carignan, with furrier tannins and more concentration, than the 2011.  Some black fruit.  Quite sturdy with a ripe finish.  Beginning to evolve nicely.

2009 Couture, Faugeres  – 14.80€
Majority of Carignan with Syrah and Grenache, but no Mourvèdre.  A trial of 24 months in barrel, in old wood, and 5% new.  Deep colour.  Quite edgy, some ripe cherry liqueur and some dry straw on the nose.  Quite ripe and dense and oaky on the palate.  Quite sturdy firm fruit.

A discussion about élevage.  They reckon they will aim for 12 months rather than 24.  Is oak really necessary? I wondered.  Yes, oak polishes the wine, IF  it is done well.  That of course can be the problem. Sadly it is not always well done. 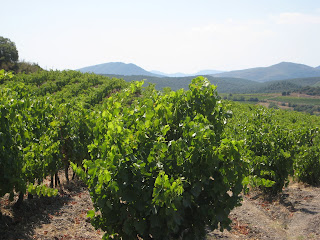 2010 Couture, Faugeres
40% Carignan, 35% Grenache, 15% Syrah and 10% Mourvèdre.  With 12 months élevage.
Quite intense nose, intense spice.  And a concentration palate, with lots of black fruit, mainly black cherries. Quite firm tannins, but not obviously oaky.  And still very young.  For my taste buds, twelve months was definitely better than 24 for the élevage.  This 2010 was definitely 'well done'.

2005 Couture, Faugeres
Deep colour.  Quite intense, dense and beginning to mature, but still youthful with acidity and freshness, as well as rich fruit.  A lot of Carignan in the blend.  Very intriguing to see how it has aged.

2001 Couture, Faugeres
Medium colour.  Maturing smoky nose.  A cedary note, and on the palate.  Elegantly rich.  Still quite tannin but not drying.  12 months in barrel.  Elegant concentration on the finish.   A privilege to taste one of their first wines.

And then we drove over the village of Lenthéric, stopping to look at various vineyards on the way.  The soil is quite mixed; there is clay, sand, schist and grès.  The schist crumbles into clay, and the grès forms pebbles.  The schist of Faugeres is different from that of St. Chinian, and less acid.  The soil is very stony and drains well, thanks to the stones.   And we admired a capitelle by a cypress tree outside Lenthéric. 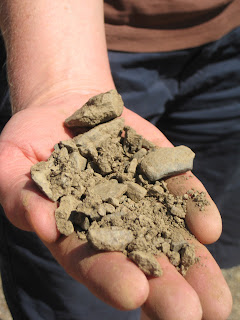 Alan March said…
I love so many producers in Faugeres, it's becoming difficult to choose where to go. This sounds like an intriguing addition to the list Rosemary, thank you
9 February 2013 at 12:04

Graham said…
I was given a bottle of the 2003 Couture by an ex-sommelier winemaker friend. Given that most 2003 reds are well past their best we drank it with low expectations last year.
It turned out to be memorable, full of life and interest.

It just proves there seem to be few rules and generalisations to be made in the Languedoc.
11 February 2013 at 18:48

Rosemary George MW said…
That is part of the fun of the Languedoc - never, ever take anything for granted!
13 February 2013 at 18:47