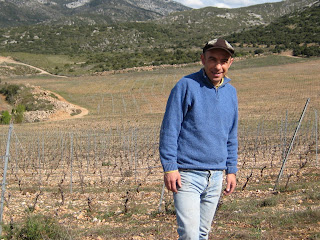 The village of Montpeyroux provides a typical example of the development of the Languedoc over the last twenty years or so.   The first time I visited Montpeyroux, back in 1987, there was just one wine producer that was worth the journey, and that was the village cooperative.  Eight years on I met a small group of five independent growers, who were working hard on their quality and reputation.  And today, as well as the cooperative, which accounts for at least half of the village’s wine production, Montpeyroux has eighteen private cellars, several of whom have an international reputation.  One of the stars is indisputably Sylvain Fadat at Domaine d’Aupilhac. 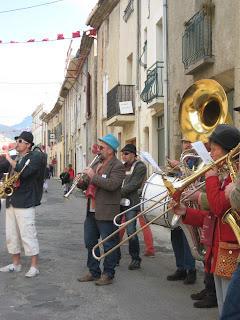 Montpeyroux itself is an attractive little village.  There is a square with the old market hall, which is used by the village restaurant, les Terrasses de Mimosa, which boasts a comprehensive local wine list.  The village really comes to life at the bi-annual wine fair, usually held in April, when the wine growers open up their cellars, providing tastings and opportunities for new discoveries.   Montpeyroux is almost the last wine village before the Massif Central, with some of the most northerly vineyards of the region, so the skyline is dominated by mountains.  Mont St. Baudile, which gives its name to the local wine de pays, rises to 847 feet and in the distance you can see the extinct volcano of the Pic de Vissou.

The wines of Montpeyroux have always enjoyed a certain reputation for the village could never produce the enormous quantities achieved by the vineyards of the coastal plain.  Consequently Montpeyroux became a VDQS in 1958, thus singling out as an island of quality in a mass of vin de table, and then with the creation of the appellation of Coteaux du Languedoc in 1985, it was incorporated into that appellation.  Today it would come within the new cru of the Terrasses du Larzac, which covers the whole of the northern Languedoc.  However, the wine growers of the village prefer to maintain their own identity and independence.   They would like Montpeyroux as the pinnacle of the pyramid above Terrasses du Larzac, with stricter regulations.   However,  all that is still up for discussion.

Sylvain Fadat’s vines came from his grandfather, who had some land in Montpeyroux and some in nearby Aniane, but all the grapes went to the village cooperative. Sylvain’s father had shown no interest in viticulture and Sylvain himself was the only one five children who wished to take over the family holding.  His father had said to him, ‘if you don’t work at school, you will have to work in the vineyards.  But that was just what he  wanted to do.  He went to the agricultural college in Montpellier and worked a vintage at Mas de Daumas Gassac in 1983, when that estate was one of the real pacesetters of the Languedoc.  Sylvain remembers that they had stainless steel vats, which you simply did not see in the average Languedoc cellars at that time.  He also worked in Burgundy, and much prefers Burgundy to Bordeaux.  His studies may have stretched his horizons, but he also observed that ‘pure oenology is not the friend of good wine.  It can help you, but it also makes for standardisation.   If you have got good grapes, you don’t need an oenologist.’ He made his first wines in 1989 – the cellar was makeshift and the tanks were outside in the yard.   Over the years he has gradually built a cellar, under the old family house in the centre of the village and he has bought more vineyards, so that he now has 29 hectares.

Aupilhac is the lieu-dit, the spot outside the village, where most of his vineyards are situated.   The altitude is 100 metres and the soil is a mixture of clay and limestone, with blue marnes, a type of clay that is the same clay that you find at Pétrus.  The vineyards here are south-facing and planted mainly with Carignan and Mourvèdre, as well as a little Grenache Noir.  Then about twelve years ago he bought more land in the hills outside the village, a plot of about eight hectares in the form of an amphitheatre, which  faces north at an altitude of 310- 400 metres.  It is called les Cocalières. Sylvain was looking for somewhere cooler than Aupilhac for Syrah and for some white grapes.  The soil at les Cocalières is volcanic in origin, free-draining limestone and basalt. The two vineyards complement each other perfectly.  They are organic, certified with Ecocert since 2006.

We wandered though the cellar tasting from barrel to barrel, and Sylvain expounded his ideas.  He is bright and articulate, open-minded and welcoming.  He makes two white wines.  The Aupilhac vineyards produce Ugni Blanc, Grenache Blanc and Chardonnay.  This is the land that had belonged to his grandfather and where his aunt had planted the Chardonnay and he keeps it for sentimental reasons. It goes into a simple vin de pays for easy drinking.  In contrast the white wine from les Cocalières comes from Marsanne, Roussanne and Rolle.  For the moment there is no white appellation for Montpeyroux; this is Coteaux du Languedoc, and will be plain Languedoc when Coteaux du Languedoc finally disappears – if indeed it does disappear.   White les Cocalières is fermented in 600 litres barrels; the oak is well integrated with white flowers and a touch of minerality on the palate, and layers of flavour, with beautifully balanced acidity.

Sylvain makes a pure Cinsaut, les Servières, from some very old vines    Part of the vineyard was planted in 1900 and the rest about 40 years ago.  The wine spends nine months in 35 hectolitre foudres.   And the flavour is wonderful, an explosion of fresh raspberry fruit leaps out of the bottle. It shows the real potential of this somewhat overlooked grape variety.  People accept that it is ideal for rosé, but an increasing number of wine growers are proving its suitability for red wine too. 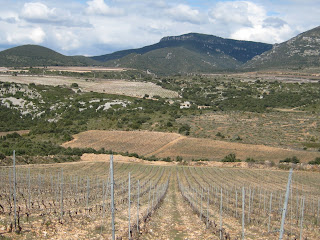 Sylvain also favours another once despised grape variety, Carignan and was one of the first to make it as a pure varietal, as a Vin de Pays du Mont Baudile.   He has always had Carignan in his vineyards and at the beginning could not afford to replant it, even if he had wanted too.  Everyone said that Carignan was worthless, but on the contrary he claims, ‘it was badly treated.  The yields were too high and the thick skins made for unripe tannins’.  It is a late ripener, and it must be fully ripe, and only then the tannins will be ripe.   Sylvain treats it seriously, ageing it in 600 litres demi-muids for almost two years.  The result is very successful, ripe brambly fruit with a touch of elegant rusticity, which for me is the hallmark of good Carignan.
Sylvain makes red wine from both Aupilhac and les Cocalières.  Both plots are vinified in the same way, with an élevage in demi-muids for the first year and then the wine goes into foudres after blending for a second winter.  But first we tried the pure Syrah from each vineyard.  The Aupilhac was riper, with some peppery fruit, while les Cocalières was firmer and fresher, again with good fruit but different texture, thus illustrating the difference between the two vineyards.   The base of les Cocalières is 65% Syrah with 25% Grenache and a little Mourvèdre, making for some fresh spicy fruit and nicely balanced tannins.  In contract the Aupilhac vineyard consists of Syrah with Mourvèdre and Carignan; this is warmer, denser and riper and altogether more substantial in the mouth. 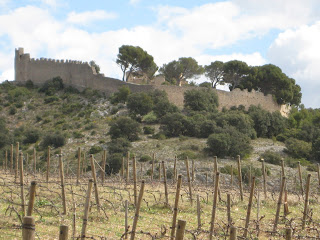 And the final red wine is la Boda, made from Syrah from les Cocalières and Mourvèdre from Aupilhac so a blend of two terroirs.  Whole bunches are fermented in demi-muids and the élevage is in new oak.  He makes just three to four hundred bottles..  It was solid and dense, with chocolaty oak and leathery notes, combining concentration and weight.  It certainly makes an impact but for my taste buds simply did not have the charm of the other red wines.  And Sylvain agreed; ruefully observing that ‘the least good is the most expensive’.   The impact of new oak does fade, but even so, for the next vintage he is planning to ferment in foudres and will not buy any barriques.  It was a great example of the approach of a vigneron who is open-minded, willing to experiment and continually pushing the boundaries in his search for excellence.
Email Post

Alan March said…
Interesting to read that he is not buying barriques, I have found one or two of Sylvain's wines a little oaky for my taste in the past including a white that I had at Les Terrasses last summer. However, some of his wines have been amongst the very best that I have drunk from the region.
19 March 2013 at 11:19

Unknown said…
With the current success of the "Terrasses du Larzac" denomination, I wonder if Montpeyroux will stay appart. I understand there will to keep there identity but I think it is quite confusing and complicated for consumers...
8 April 2013 at 19:01