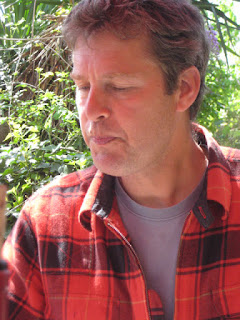 I am a great believer in higgledy piggledy in the cellar.  It means that there is always an element of surprise in the search for a bottle.   But don’t get me wrong – part of our cellar – my husband’s part – is very organised, but I look after two wine racks where single bottles can sometimes get lost.  So yesterday evening  I was looking for something to go with some pork with juniper and alighted up on  a lone bottle of 2004 Les Trois Terres that had been sitting in the rack since, I am not quite sure when.   You could think that 2004 is getting on for a bit for the Languedoc, but no; this was fresh and lively and drinking beautifully with some ripe southern warmth and balancing tannins.  It was deliciously harmonious and like all the best bottles, not quite big enough.

2004 was the first vintage of a young doctor, Graeme Angus, and he made just 2000 bottles   Despite his name, he does not come from Scotland, but from south of the border.   He gave up the hectic working life of a large London hospital and moved out to the Languedoc and settled in the village of Octon.  His next door neighbour is Guilhem Dardé from Mas des Chimères.   I first met Graeme by chance when I was visiting Guilhem and asked about other wine growers in the village.  Come and meet my next door neighbour he said.    That was back in 2006 when Graeme had just two hectares of vines, three different plots in three different villages on three different terroirs, hence the name of his wine. There is Grenache, Syrah and Mourvèdre, from St. Jean de Blaquière, Cabrières and Octon, with the soil variations of schist, ruffe and grès.   After last night’s bottle, it is definitely time for another cellar visit, so watch this space.