Freelancing wine writing can be precarious.  A magazine gives you a commission, and then decides to close down, and so you are left with articles that have no publisher.   This is what happened to me last summer, so since there is a Languedoc or Roussillon link with each of the four beleaguered articles, I am at least going to post them on my blog.    First up is a profile of Domaine Gauby. 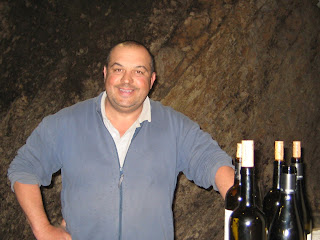 Gerard Gauby; unfortunately I failed to photograph his son, Lionel

The first time I met Gérard Gauby, back in 1999, I asked him about the history of his estate, to which he replied, with apologies to Louis XIV,’ l’histoire, c’est moi’.   And twelve years on, that confident comment is even more appropriate, for Domaine Gauby has proved to be one of the true pioneers of Roussillon. Gérard’s first bottling was as recent as 1985.  Until 1983 his grandfather had delivered grapes from the family vineyards to the local cooperative, and the estate really only took off at the beginning of the 1990s.   Now it is firmly established as one of the leading estates, not only of Roussillon, but the whole of the Mediterranean.

Back in the 1980s, viticulture in Roussillon was dominated by the village cooperatives.  There were very few independent wine growers, but over the years their number has soared, as the cooperatives have largely paled into insignificance.   As the cooperative members have retired, they have sold off their vineyards of old vines, which the newcomers have eagerly sought to purchase.  The village of Calce, where Gérard Gauby is based, has become the focus of a particularly creative group of young wine growers, mostly influenced and inspired by Gérard and his wines. 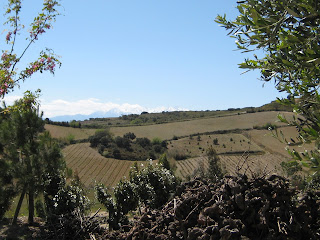 On my most recent visit to the estate, I met Lionel, Gérard’s son, who is gradually taking over the wine-making, while his father concentrates on their vines.   They have left the cramped cellar in the village, and built a new cellar hidden in the hills outside Calce. You take a narrow dirt track, hoping that you will not meet anyone coming in the opposite direction, and the occasional sign post provides reassurance that you are indeed on the right dirt track.   Most their vineyards are in the same valley.   Altogether they have 40 hectares, 25 hectares around the cellar, and fifteen hectares in an adjoining valley, Coume Gineste.  And as well as vines they have fifty hectares of garrigues, slopes covered with the shrubs and herbs of the Mediterranean.  The scenery is wild and rugged, with hillsides of garrigues interspersed with vines.  Both Lionel and his father are passionate about planting trees, to enhance their environment.  The vineyards have been organic since 1996, and fully biodynamic since 2001.  Lionel has his own very precise ideas about the treatments they give the vines, using some 25 different plants.  They do not aim for especially low yields; they give their vines plenty of organic compost and the vines find their own balance.  The valley is a nature reserve, and hunters are not allowed. 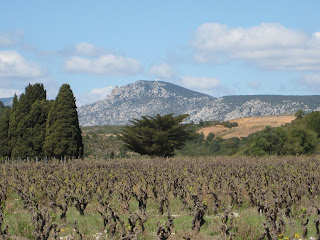 The village of Calce, close to the Agly river valley, lies between the Pyrenees and the hills of Corbières.  Nor is it far from the sea, so there is a contrast of sea and mountain, with both affecting the climate.   Wind have an important impact, and can at times be very violent.    The soil is varied too, with limestone to the north – the name of the village of Calce derives from the presence of limestone or calcaire– and to the south there is schist.  The formation of the Pyrenees upset the geological strata – you can the results in their cellar, with the bare rock revealing vertical lines of limestone.     For Gérard the character of Calce is determined by the old vines, with their deep roots, and by what he calls fraicheur or freshness, coming from a climate that is influenced by both the sea and the mountains.
The last time I met Gérard, a couple of years ago, he explained that his wines had evolved to equate to the Burgundian classification system, so that you have the village level, a premier cru and a grand cru.  But whether they are vin de pays , or IGP,  as vins de pays are now called, or appellation is pretty irrelevant.   The white wines tend to be IGP, as they use grape varieties not permitted in the appellation, while the reds are usually Côtes du Roussillon Villages.   Our tasting with Lionel began with their ‘village’ wine, Les Calcinaires white, a Côtes Catalanes and an intriguing blend of Muscat, Macabeo, Vermentino and Chardonnay.   Gérard’s wife, Ghislaine, has inherited the Chardonnay vineyard a while ago, but it is not normally a grape variety that you would usually expect to find in Roussillon.   The wine was aged in old barrels. And Lionel enthused; ‘this is our best Calcinaires ever’.  2010 had been a dry year, but not an especially hot year.   There was a satisfying note of minerality, a refreshing saltiness, with wonderful freshness, texture and length. The various grape varieties are blended during vinification, and then the assemblage is fine-tuned before bottling.  The white wines always undergo a malo-lactic fermentation, and they no longer use sulphur during the vinification, just the tiniest amount at bottling.  ‘The less you move a wine, the more it speaks to you’ observed Lionel. 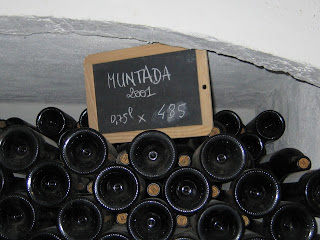 The Cuvée Vieilles Vignes equates to a premier cru.  The white comes from Macabeo, Grenache Gris and Grenache Blanc that are anything between 45 and 85 years old.  The minerality is explosive.  ‘That’s what interests me: living wines,  vins vivants - that reflect their soil’ Lionel commented.   And the red Vieilles Vignes is a blend of Grenache, Carignan, Syrah and a little Mourvèdre.  They have Carignan vines that are over 100 years old, which were planted before phylloxera arrived in the area in the 1880s.  And some of their Grenache is nearly a hundred years old too.   And for the red wines they have stopped destalking – ‘removing the stalks takes away too much muscle’, said Lionel.

The grand cru is represented by Muntada, which comes from two or three plots of old Grenache and old Carignan, with a little Syrah and Mourvèdre, grown on limestone, with an élevage in larger barrels, rather than small barriques.   The wines are beautifully crafted – my early memory of Gérard’s wines, a decade or so ago, was of solid, structured oaky, even overly extracted, wines.   Today there may be intensity, but there is also elegance, freshness and length.  The wines have good tannin structure, balanced with some wonderful fruit, and enormous ageing ability. 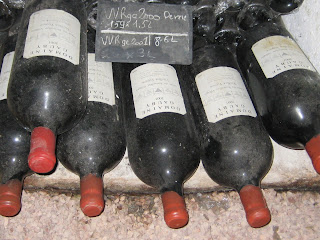 Although Lionel has been working with his father since 2002, 2008 was ‘his first real vintage’ when he was able to do what he really wanted to do.  And consequently he has begun to develop the range, adding other grands crus to Muntada.  Now there is a Coume Gineste red, as well as white, mainly from old Carignan; La Foun, which means a fountain in Catalan, is mainly Carignan, including some pre-phylloxera vines.  Lionel described the 2010 as the best Carignan he had ever made.  Carignan can de difficult, but this shows real potential, for a grape variety that was often despised.   La Roque comes from 100 years old Grenache, grown on the hill across the valley from the cellar; the wine is given eighteen months of ageing in barrel, and they made just 1000 bottles.   La Jasse is mainly Mourvèdre with a little Carignan.  Lionel reminded us that Mourvèdre is Catalan in origin.   And Combe de Llooups comes from Grenache Gris that has been given a week or more’s skin contact with a whole bunch fermentation.  The taste from barrel was very intriguing.  Lionel is also trying a vin de voile from Grenache Gris – we were allowed to peer into the barrel to see the flor.  He may not make the same mono-terroirs, as he called these small cuvées, each year.  It will depend on vintage conditions.

Then I asked Lionel if he had done any studies.   He was quite evidently not suited to the class room or lecture hall.  ‘I asked too many questions’, he replied, and was obviously the enfant terrible who drove his lecturers to despair.  In the cellar he is in his element, but he likes to live dangerously.  ‘You have to dare to make mistakes; I love danger – that’s how you progress’.

And on Lionel’s recommendation, we finished our visit to Calce in the local village restaurant, le Presbytère.  It was perfect for the occasion, with a simple menu du jour and friendly service.   And the wine list was on a blackboard, with the wines from all the other growers of the village, a small band of friends, with Domaine Padié, Olivier Pithon, Thomas Teifert from Domaine de l’Horizon, Thomas Lubbe at Domaine Matassa, and the newest, Château la Forgue, several of whom first came to Calce to work at Domaine Gauby, and stayed, thus demonstrating the impact that one enlightened and talented wine grower can have on his village. 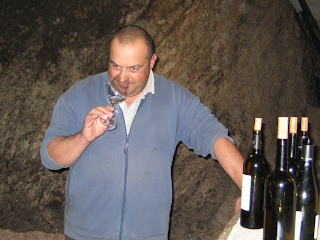 2010 les Calcinaires red, Côtes du Roussillon Villages
A blend of Syrah, Mourvèdre and Carignan – no Grenache in the 2010.  Deep colour.  Quite ripe and rounded, with some spicy fruit on the nose.   Quite closed peppery fruit on the palate.  A youthful freshness.

2009 Vielles Vignes red, Côtes du Roussillon Villages
Deep young colour.  Quite a concentrated, ripe nose, and on the palate a wonderful explosion of fruit.  Balancing tannins with spicy fruit.  A long finish.  A blend of Grenache  Carignan, Syrah and a little Mourvèdre. 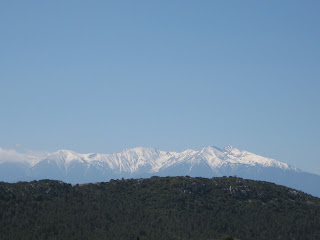 Gauby wines I've been able to drink I have really appreciated but, my, they are expensive. Good value you think?
8 March 2013 at 15:52

Rosemary George MW said…
Difficult one that. They are expensive and they are great wines, and they age beautifully. Shall I be diplomatic and say that the prices are fair?
8 March 2013 at 18:30

Alan March said…
Fair enough :)
The diplomatic service awaits Rosemary should you decide on a change of scene. I shall content myself with the cheaper bottles and dream of Muntada.
The whites sound interesting, as in so much of the region I think there are some really interesting developments with white wine.
9 March 2013 at 11:09