A day with the Mediterranean Garden Society

You may well ask what gardens have to do with wine, apart from the fact that a vineyard can be considered a garden.   As it happens there are two wine estates in the Languedoc, and probably some others that I don’t know about, that do have stunning gardens, and make rather good wine, namely Château de Flaugergues and Château de l’Engarran.   Both are within easy reach of Montpellier.   My old school friend, Heather Martin, is secretary of the UK branch of the Mediterranean Garden Society and one of the things she does is organise wonderful garden holidays for the members.  This year she decided to focus on Pézenas and asked me to join them for a day and add a vinous perspective to the visits. 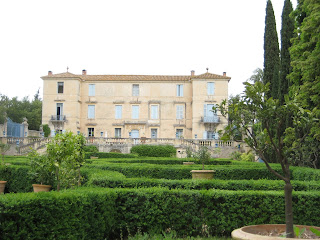 First we went to the Château de Flaugergues, in the area of Méjanelle, and these days almost surrounded by the encroaching suburbs of Montpellier, which makes it a delightful oasis in the middle of urban sprawl.  It is the property of the de Colbert family, descendants of Louis XIV’s minister, who was responsible for the building of the canal du Midi.   First we were taken round the garden – I am no garden expert but I do enjoy looking at them, even in the drizzle that was Thursday’s weather.   There are formal gardens of box hedges, a wonderful forest of bamboo and a small garden of the five senses.  Roses were in flower. 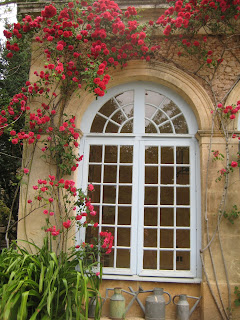 And then we tasted, with Pierre de Colbert.

2012 la Sommelière Blanc
A blend of Rolle, Viognier, Grenache blanc, Marsanne and Roussanne.  It had a lightly herbal nose, with more white blossom on the palate and sufficient acidity to provide freshness.  A nice balance and a good finish. 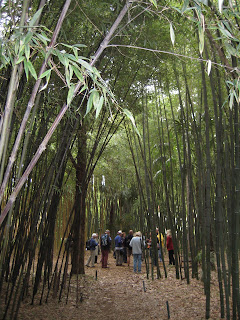 2012 Cuvee des Comtes rosé
A blend of Grenache, Syrah and Cinsaut.  A very delicate pale colour. There is a trend in the Languedoc to emulate the pale tones of Cotes de Provence rosé.  On the nose there were hints of raspberry and some herbal notes, with fresh acidity and some dry herbal fruit on the palate.  It had only just been bottled, and I thought it would taste more forthcoming in a month or so.  The Syrah part is saigné  and the Grenache and Cinsaut are pressed.   Pierre observed that rosé consumption is on the increase in France.  And he has used screw caps for ten years, which is pretty innovative for the average French wine grower – the French consumer does not like screw caps, but most of Pierre’s sales are on the export market, with China in number one position.

2011 Cuvée des Comtes red is a blend of Grenache 50% , Syrah 40% and Mourvèdre 10%,   The Mourvèdre gives acidity and spiciness.  It is a late ripener, so they do not pick it until the end of September and it enjoys the proximity to the sea; they are only 6 kilometres from the sea, and at an altitude of 45 metres. 2011 was not a tannic vintage and  the wine was medium in colour, with some ripe brambly fruit on the nose, from the Grenache, with some leathery notes, and some ripe fruit.  We later enjoyed it for lunch.

2011 la Sommelière, a blend of 65% Syrah, with 30% Grenache and a touch of Mourvèdre, and again with no ageing in oak.  There were peppery notes on the nose from the Syrah, with a deeper colour and more structure and depth than the Cuvée des Comtes.

Château de Flaugergues is also worth a visit as it has a rather good restaurant – we had an imaginative starter, with some cauliflower puree, a poached egg and a slice of chorizo – it made a surpassingly tasty combination.   And next came an elegant filet  of fish, a lieu,  which I think is related to hake.    And to accompany lunch, as well as the Cuvée des Comtes there was another white wine, Foliae 2012.   I was slightly taken aback by the bright blue bottle.  It was light and fresh with some acidity.   The château is also open to the public – we saw an elegant dining room with the table laid with lovely old wine glasses and porcelain,  and the library, and a magnificent staircase adorned with tapestries.  And the house is still lived in by the de Colbert family, so it feels more like a home than a monument historique.

And then we went to the Château de l’Engarran, in St. Georges d’Orques, which like Méjanelle comes within the Grès de Montpellier.   At l’Engarran we were welcomed by Diane Losfelt , the winemaker there.  I’ve blogged about l’Engarran before but on this visit Diane was in particularly theatrical mode and gave us a lovely interpretation of the various symbols in the carvings on the façade of the chateau.   And the gardens are formal, but nonetheless exude great charm with their statues and urns and a large pond. 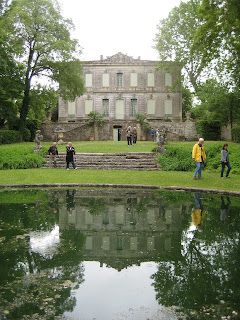 And of course the visit finished with a tasting;
2012 Cuvée la Lionne, Pays d’Oc, a pure Sauvignon with some ripe fruit.  Sauvignon from the Midi never has the crisp minerality of the Loire Valley; this was ripe and rounded; quite soft with good fruit and some ripe varietal character.

2011 Cuvée Ste Cécile, Languedoc, a blend of 43% Syrah, 32% Grenache, 15% Carignan and 12% Cinsaut. It is refreshingly unoaked, with some ripe spicy fruit on the nose and ripe liqueur cherries and a streak of tannin on the palate.  It provided warming Midi sunshine on a rather cool day.. 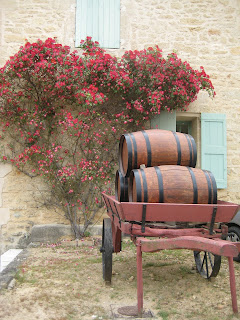 2009 Château de l’Engarran, Grès de Montpellier.  A blend of 73% Syrah, 20% Grenache, 6% Carignan and just a touch of Mourvèdre and Cinsaut, given 12 months in oak.  This is more serious.  The colour was deep, with a rounded nose, with hints of vanilla, spice and mocha that were repeated on the palate.   A good note on which to finish the tasting of the day. 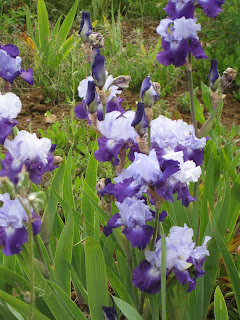 And then we went to look at a field of irises which has survived a battering in the rain of the previous day. 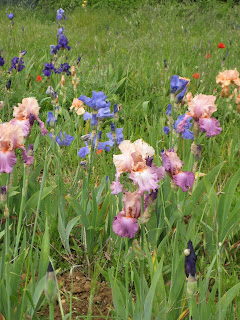