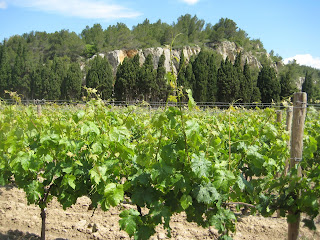 It is the season of balades  vigneronnes, so last Sunday saw us walking Les Sentiers Gourmands on the Massif of la Clape.  This year the walk was at Château Rouquette sur Mer,  just by the roundabout at the entrance of Narbonne Plage.    This estate totals some 400 hectares, of which only about fifty hectares are vineyards; the rest is garrigues and so perfect terrain for a greast walk.   You are never far from the sea, and there are good tracks through the garrigues and past vineyards, young and old.   You can also enjoy dramatic views of the steep cliffs of la Clape, making it some of the finest of Languedoc scenery.    The wet spring has ensured that the wild flowers were at their best, with brilliant yellow broom and white and pink cistus.   And the wind kept us alert, and hanging on to our sun hats.  I nearly lost mine in a vineyard on more than one occasion. 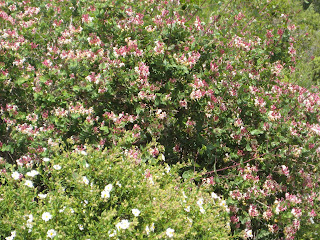 First stop was for oysters from Gruissan – but there was a bit of a bottleneck, so we decided to give molluscs a miss, but we did try the wines intended to accompany them.  A choice of three of which the best was Château Mire l’Etang Blanc 2012.  It was delicately salty and fresh with good acidity, while Château Capitoul,  Rocaille 2012 was fuller and more mouth filling, with a touch of oak and vanilla. 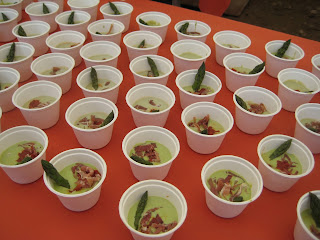 The food was provided by a restaurant in Narbonne, les Cuisiniers Cavistes, and very good it was too.  The mise en bouche was a cappuccino of asparagus with a little ham, some tomato and a hint of piment d’Espelette.  I love asparagus, and this was simply delicious, with an intense flavour.  The best wine here was 2012 Château Laquirou Blanc, Albus, a blend of Grenache Blanc and Bourboulenc.  It was lightly herbal, with ripe fruit and a satisfying mouth feel, balanced with acidity. 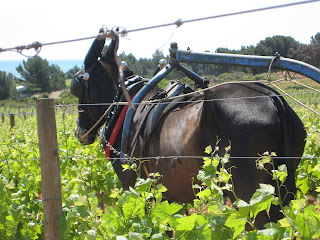 The path took us past vineyards with views of the sea, and a mule named Vanina who was demonstrating the old fashioned art of ploughing a vineyard. 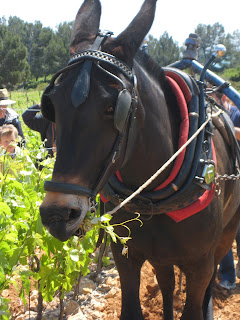 And then it was on to the cold starter, a terrine of quail and pigeon, with juniper. 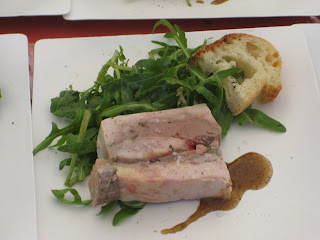 Vianney Fabre was pouring 2009 Château d’Anglès blanc, the grand vin, which is fermented in oak.  However,  Vianney was very insistent on the fact that the barrels were two years old, so they avoided any obvious oaky flavours.  The oak was indeed very well integrated, with ripe fruit and good body and weight.   The blend is 40% Bourboulenc, with 20% each of Grenache, Marsanne and Roussanne.

At the adjacent  barrel was a name that was new to me, Domaine l’Angel, with a 2012 rosé, that was fresh and rounded, and avoided the pitfall of bonbons anglais, a term that  the French use to describe the taste of young rosé with an excess of amylic acid.    M. Kleinrichert explained that he worked the lees separately to avoid those  aromes primaires.  The palate was nicely rounded with herbal notes, and a touch of raspberry on the palate, from a blend of 90% Grenache and 10% Syrah. 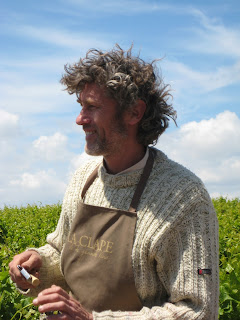 The hot starter was a delicious ravioli of lobster, in a cream of saffron, and we ate it looking out at the sea.   And the best accompaniment was the white wine from Château Rouquette sur Mer, 2012 Arpège, a blend of Bourboulenc and Roussanne, with a delicate nose and lightly herbal fruit and white blossom on the palate with appealing acidity and depth.

The coop from the village of Fleury, Cave la Vendemiaire was pouring 2012 Blanc, les Arbres Blancs, a blend of Grenache Blanc, Bourboulenc and Vermentino.  It was fresh and floral, and nicely refreshing and uncomplicated. 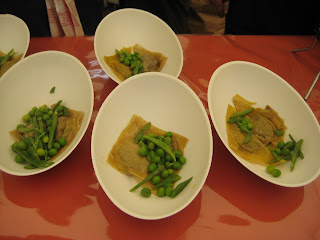 For the meat course, a succulent civet de canard, with some mashed potatoes flavoured with truffle oil, we had a great view of the ruined château of la Rouquette sur Mer. It dates from the 14th century but was abandoned after the phylloxera crisis, when it was noticed that the vines survived better in the sandier soil closer to the coast.  Then it was badly damaged during the Second World War and is now a picturesque ruin, with the remains of German defences nearby a reminder of the vulnerability of the coastline.    And there were ten wines to try.

My friends Susan and Peter Munday were pouring the lone rosé, Château Moyau, a blend of Cinsaut and Grenache, which was fresh and fruity with good acidity, providing some nicely uncomplicated drinking. 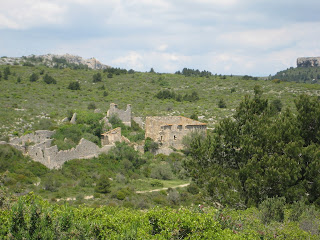 Château Moujan changed hands a year or so ago and the new owner, Patrick Massoleni has as yet to bottle any wine.  He had two vat samples to try, an old Carignan, with some promising berry fruit and structured, and a Syrah with fresh peppery flavours.  They promised well for what will be the Cuvée Parole
d'Homme 2012.

Château Abbaye des Monges 2010, Augustine,   was a blend of Carignan, Syrah, Grenache and Mourvèdre, with only 10% of the cuvée aged in oak.  There was some dry spice on the nose, with some ripe fruit and a good balance of tannin on the palate.

2010 Domaine Pech Redon, l’Epervier was also unoaked, with some dry leathery spicy fruit and a satisfying balance of tannins. 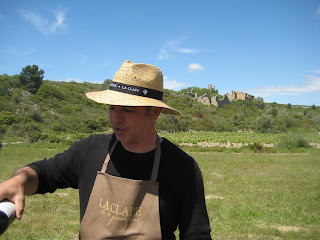 Peter Close was pouring Château Camplazens, la Garrigue, and looking remarkably alert  for somebody who had flown in from the States the previous day.  However, he had had some good news – their 2011 Premium has just won a trophy in the Decanter World Wine Awards, so he was dead chuffed.    La Garrigue was ripe and spicy, with a leathery note and a touch of orange.  It went well with the civet, as did Rouquette sur Mer’s  2011 Cuvée Henry Lapierre.   That is a blend of 75% Syrah with Mourvèdre, aged in new oak.  There was youthful oak on both nose and palate, but it was well integrated with lovely ripe fruit, avoiding the pitfall of oak leaching the fruit, which seemed to be the main problem with some of the wines that I did not enjoy so much. 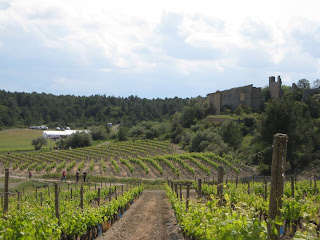 And then it was on to the cheese course, a selection of goats’ cheese from Mas Combebelle near Bize-Minervois.  Domaine Ferri-Arnaud was pouring their white wine, 2011 Fleurs Blanches, which went deliciously with the goats’ cheese.  It was fresh and delicate, with some herbal notes.   The white from Château des Karantes was more solid. 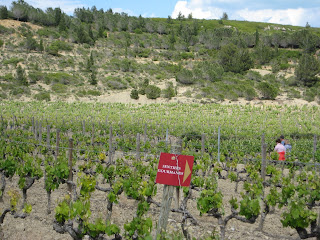 Christa Wildbolz from Mas de Soleilla was offering 2010 les Chailles, which is Grenache with a little Syrah, and no oak.  There was some lovely liqueur cherry fruit on the nose and palate, and  it was ripe and rounded, with appealing spice and a tannic streak.  And she also had incognito as she put it, their 2011 white, which is a blend of Bourboulenc and Roussanne, with a touch of oak, with fruit and texture.  It made a lovely finale, as we had decided to skip pudding.  And then it was time to go home,  for a cup of tea! 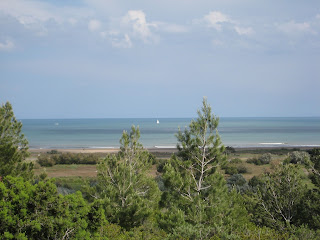