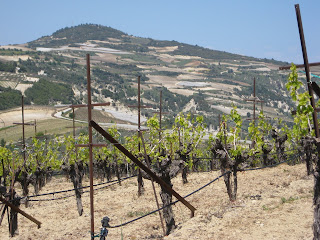 Apologies for completely neglecting my blog over the last couple of weeks.  I could say that I don’t know where the days have gone, but I do – and they did not allow time for blogging.

First of all I was on an MW study trip to Greece, an action-packed week, with 19 other MWs culminating with two days on the fabulous island of Santorini, and organised with consummate skill by the one Greek MW, Konstantinos Lazarakis.  He is the most fantastic ambassador for his country’s wines.   And each day was full of new discoveries. 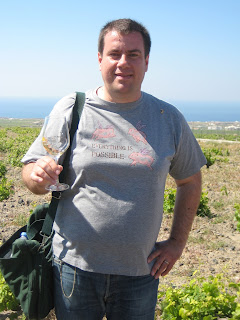 We began the week in Athens, with a tasting of wines from Crete – in a restaurant appropriately called Dionyssos, and superbly situated at the foot of the Acropolis.  It was a tasting and dinner with a view.  My Greek friend, Sandra, who I stayed with the previous day, read my programme and observed: you are going to eat well, and we did.  Memories of tepid moussaka from my student days were put to rest by the wonderful  array of delicious and creative dishes.  I had no idea that Greek food could be quite so good, and so full of variety and flavour. 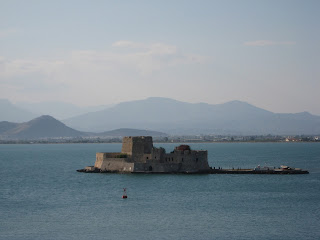 But I digress: we were there for the wine. We visited a few wine estates in key appellations, namely Nemea, the largest red appellation based on the Agiorgitiko grape, and Naoussa and also Amynteon based on gutsy Xinomavro.  We went north to Thessaloniki and as far south as Napflion, a stunning coastal town in the Peloponnese, but in the interests of tasting as many wines as possible, and meeting as many producers as possible, the wine growers usually travelled to a central point for a collective tasting. That way, one of our number counted, that we clocked up 92 producers and 390 wines.    Usually the tastings were at a wine estate or restaurant, but one was in a fabulous museum of modern jewellery at the foot of the Acropolis.   The charms of Robola of Cephalonia and delicious dessert wines from Samos were almost put into the shade.  And then we had a cheese tasting – cheese is a absolute staple of the Greek diet – and we learned that there are variations in feta, as well as other harder cheeses. 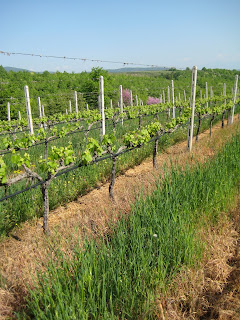 A day did not go past without a new grape variety – from Crete there were white varieties Athiri and Vidiano, and Kotsifali for red.  Nemea is only Agiorgitiko, so less surprises there.  A  tasting of the white wines of Mantinia introduced us to Moschofilero, with its lightly muscaty flavours.  From elsewhere in the Peloponnese we encountered Mavrodaphne,  Lagorthi and Asproudes, Roditis, Black Korinthiaki, and Mavroudi.  Macedonia produced Xinomavro, and Limnio, but also grows the usual suspects amongst the international varieties, Sauvignon, Chardonnay, Cabernet Sauvignon, Syrah and others.

A tasting of Thessaly wines in a lovely old family tavern in Piraeus produced white Debina and red Limonia, Krasato and Stavroto, sometimes as blends and sometimes as a single variety. From the Aegean and Ionian islands there was Fokiano from Ikaria,  Robola from Cephalonia, Monemavassia and Mandilaria from Paros, and Mandilaria. Attica grows Savatiano, Malagousia, as well as Syrah and Sauvignon Blanc,and  is also the home of retsina, which we did not escape completely, but I have to admit to a perverse  liking for those fresh gingery resinous flavours. 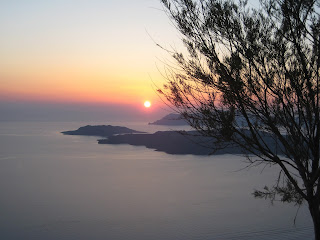 And then we flew to Santorini.  There is no denying that this was the absolute highlight of the week.  The viticulture is so extreme that it has to be seen to be believed.    The vines need protection from fierce wind, and fierce sunshine, and so they are pruned in the shape of protective baskets in a small hollow.   The soil is volcanic ash, with some pumice and other stones, but there is no organic matter, and it is astonishing that anything grows at all, but it does.  The vines depend on sea mist for moisture and can tap some moisture retained by the pumice stones after occasional rain, and the island is phylloxera immune.  If there is no clay, there is no phylloxera.  Actual replanting is rare.  When a vine needs replacing, it is ‘decapitated’ and will regenerate from the existing deep root system – this can be done about every 80 years – and when it is finally dying, after about 400 years, they practice the system of provinage, taking a shoot and placing it in the ground so that it will grow roots.   There are very few plantings, as you would normally understand them.  Yields are tiny and the principal white grape variety is Assyrtiko, which is also found in northern Greece, but on the island it takes on a fabulously original mineral character.    There is no doubt that Assyrtiko is my new favourite grape variety, and well worth seeking out. 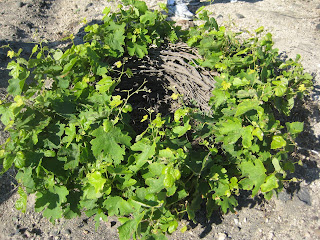 And you may well ask what all this has to do with the Languedoc and the short answer would be ‘not a lot’ but I think that,  like the Languedoc, Greece is in the process of discovering its true potential.  It may have been making wine for thousands of years but until very recently, methods in both vineyard and cellar have been pretty primitive, but now you sense that all that is changing – and there is an enormous amount to explore and discover.   True, there is the  underlying economic situation to consider, but our hosts chose not to mention it – and increased wine sales especially on the export market can only help. 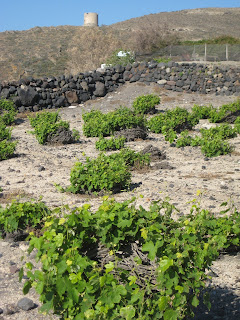 And why did I also entitle this posting Decanter?  Last week I spent five intensive days chairing the Languedoc-Roussillon panel for Decanter World Wine Awards.  Results are embargoed until later in the month, so I cannot comment more than to say that there were some lovely wines, and also some not so good.  But more on that in due course.  I am flying to Montpellier on Monday so my next posting from the Languedoc. 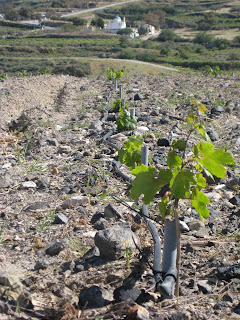