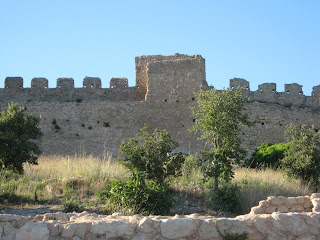 The ballade vigneronne organised by the Terrasses du Larzac is one of the highlights of the summer wine calendar.  This year it was around the village of Montpeyroux, which is technically part of the Terrasses du Larzac, but which prefers to maintain its independence.  However, a handful of Montpeyroux producers were also invited to show their wines.    The summer arrived with a vengeance in the Languedoc last week, so the temperature was not ideal for walking, but fortunately all the wine growers were well prepared with large quantities of ice for keeping their wines chilled, so the heat  was more of an issue for people than for wine. 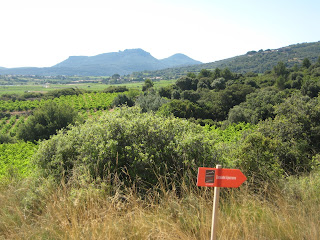 The start of the walk was close to the tiny hamlet of Le Barry and our first étape was at a  vineyard called Montredon, with a mise en bouche, a chouquette aux olives et magret séché – I think a chouquette might best be described as a small bun, and it soaked up some wines nicely. 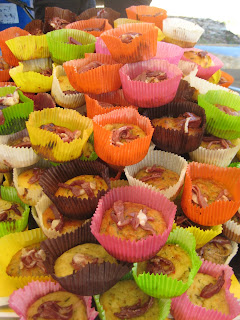 The vinous highlights were:
2012 La Bastide aux Oliviers blanc
Light colour; quite lemony on the nose, with some herbal notes on the palate.  Quite rounded, with good balancing acidity and a fresh finish.

Pascal Dallier from Domaine de Joncas was showing his very first rosé, Nébla 2012.  It is a blend of equal parts of Syrah and Grenache; the grapes were pressed and there was no fining or filtration.  Light colour.  A very ripe, fruity nose.  Very ripe and rounded and mouth filling on the palate. 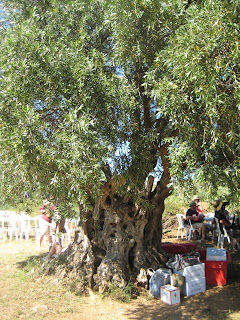 And then we moved on to the next étape in an olive grove, with some truly venerable trees.  They apparently belong to an elderly lady, who had reluctantly allowed the terrain to be cleared of brambles and weeds, so that we could enjoy the hilltop position with a very welcoming breeze.  Highlights here:

2011 Mas de la Séranne, les Ombelles.   One third each of Grenache, Roussanne and Vermentino, with 15% oak fermentation and élevage.  A touch of oak, but the palate was quite rounded and leesy with some satisfying texture.

Alice and Graeme Angus were pouring Les Trois Terres, 2010 Saut du Diable, from Graeme’s vineyards at St Jean de Blaquière.  Grenache is the dominant variety, with some Carignan and Syrah.  There was some rich cherry liqueur fruit on the nose, with ripe spice on the palate, and a balancing tannic streak.  Very satisfying and good value at 10.00€ - which  apparently is the minimum price for a Terrasses du Larzac

Jean-Baptiste Granier was showing his 2011 les Vignes Oubliées.  It was quite peppery on the nose, with a fresh peppery palate.  Medium weight and quite elegant.

And the accompanying dish was the most delicious foie gras hamburger – mini burger Rossini et peches caramélisées.  To die for! 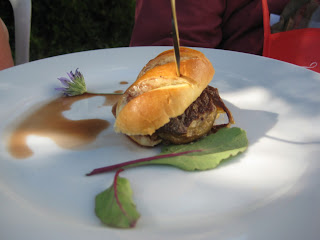 The track then took us on through the vineyards of Aupilhac, which Sylvain Fadat had thoughtfully labelled, so that we knew which variety we were looking at. 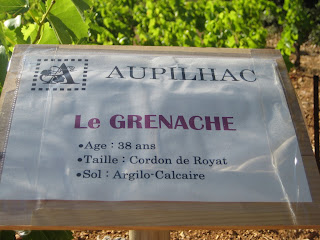 And there was also a sign telling us to keep out of his small plantation of truffle oaks – I wondered if it was wise to advertise their presence at all……. 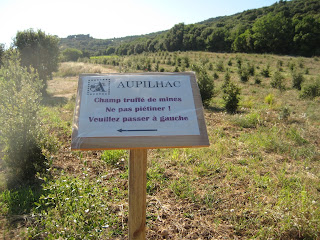 Sylvain was pouring his 2012 Cocalières, which was rich and herbal, with lovely depth and very good acidity.

Delphine and Julien Zernott from Domaine du Pas d’Escalette were showing their 2012 Ze Rosé.  It looked very delicate and pale with a fresh nose, and on the palate was surprisingly powerful, but with an underlying  elegance.  We made plans to go and buy some – Delphine having said that it was sold out, but that she might be able to find us a few bottles.

Beatrice and Sébastien Fillon from Clos du Serres were showing their first white wine, 2011 Le Saut du Poisson, a blend of Grenache blanc with some Roussanne and Rolle. 25% fermented and aged in oak.  There was a touch of oak on the nose, wand the palate was quite round, with weight and textured, and a dry tannic steak.  The wine is still very young and promises well.

2011 Château de Jonquières was a blend of principally Cinsaut and Carignan, with some Syrah, Mourvèdre and Grenache, all aged in vat.  It had some lovely spicy red fruit; medium weight, and quite fresh with a tannic steak, and refreshingly unoaked.  11.00€

Olivier Jeantet from Mas Haut Buis has some of the highest vineyards of the Languedoc.  His cuvée 2011 les Carlines is half Syrah, with Grenache and Carignan.  Quite a deep colour; a spicy nose, with a medium weight palate, and a good balance of fruit and tannin.  Kept in a tronconique vat.  Oliver enthused: j’adore ce millésime, the 2011. 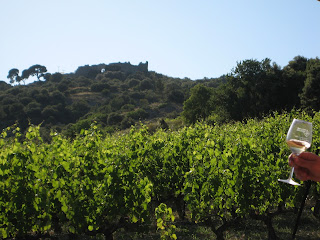 So some lovely wines at this étape, but unfortunately the crème brûlée de langouste et son zeste d’orange was distinctly disappointing – especially after the previous course, which had raised our expectations.    And we could see the ruins of Le Castellas well above us, and realised with a certain amount of trepidation that that was where the meat course was situated, within the ruins of the old castle. It was quite a steep climb, but we were richly rewarded with some lovely wines from some of the star producers of the region, as well as fabulous views of the surrounding countryside, as far as Aniane and Gignac. 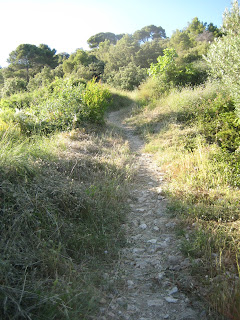 2010 la Réserve d’O
Lovely balance.  Some oak and some fruit, ripe and fresh, with a good streak of tannin and some satisfying depth.  Good ageing potential

2011 la Peira, les Obriers de la Peira
Medium colour.  Quite a solid nose.  Some oak and some freshness and some ripe fruit. Some smoky leathery notes.  Good depth and an intriguing finish.

2010 Mas Julien, les Etats d’Ame
Quite a firm structured nose, with some gamey notes, and even more so on the palate.  Nicely characterful. 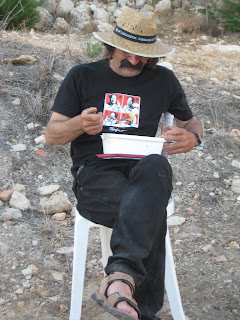 2010 Mas des Chimères, Caminarem
Equal proportions of all five of the classic red varieties of the Languedoc.  Quite a deep colour.  Quite a solid rich leathery nose, with some berry fruit on the palate.  Good structure.  Quite a firm tannic note. 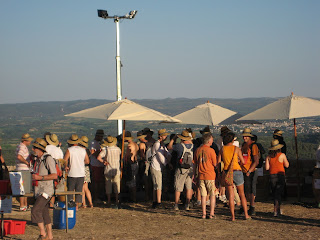 2011 La Traversée – 24.50€
Gavin was back in England for a wedding so he had left his friend, John, pouring his wine.  Ripe berry fruit on the nose, and the palate, ripe with some firm tannins, and a harmonious balance with depth and elegance.    A lovely glass of wine.  John has 4 hectares of his own, in St Saturnin,  which he is converting to organic viticulture – and has found a cellar.  So watch this space.

And the last wine came from the Montpeyroux coop, 2010 Peyrou, and was a fraction of the price of its neighbours at 5.50€  A blend of Syrah and Grenache. Medium colour.  Fresh cherry fruit.  Medium weight with a tannic streak.  It defended  itself against its more expensive neighbours more than adequately.

And to accompany all that we were given some magret with a cherry stuffing, with some fresh ravioli, with black truffles.  The ravioli was delicious, but the duck had been jogging round the hills of Montpeyroux – nevertheless our four-legged companion was delighted with our rejects. 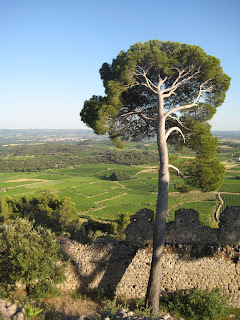 And then it was downhill to the cheese course in a small square in le Barry.  Cheese was a duo of tome de brebis and fresh goats’ cheese.   The best white wine of that flight was 2012 Plan de l’Homme, Flores  a blend of Roussanne with 10 % Grenache blanc.  It was light in colour, with some rounded white blossom fruit on nose and palate, with a satisfying texture.

And the best red came from Estelle Salles, her 2011 Hommage, from Capitelle des Salles, a blend of Grenache 60% with 20% each of Carignan and Syrah.  12.00€  It was rounded and ripe with rich cherry fruit, as you would expect from a Grenache dominant cuvée.  And it was quite alcoholic at 14.5˚, but the Carignan provided a balancing tannic streak.

I also enjoyed Pascale Riviere's la Jasse Castel, 2010, les Combariolles.  The main grape variety is Grenache, with a little Carignan and Syrah.  There were some dry leathery notes, with some perfumed fruit  on the palate and a youthful finish.

And a little further down the street we got to pudding, a fig clafoutis accompanied by a crème de lait à la fleur d’oranger et son cigare aux amandes.  The clafoutis was nice, but I wasn’t sure about the consistency of the crème, which was definitely not creamy.  And the first wine to taste, before pudding, was Villa Dondona’s 2011.  Jo and André were on their home patch, as they live in the hamlet.  The wine had rounded red and black fruit, with some spice and supple tannins, and a confit finish. 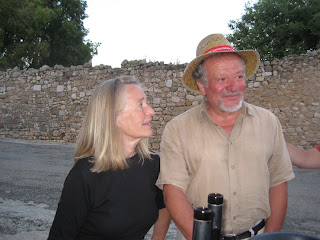 And as well as  a dry red, Roland Almeras  from les Souls was also showing a late harvest  red, a blend of 60% Mourvèdre and 40% Grenache.   It was deep red in colour, with a rounded nose and opulently spicy cherries, balanced by tannin and acidity, and some underlying richness, rather than sweetness.

And the best dessert white undoubtedly came from Charles Walter Pacaud, of Domaine la Croix Chaptal, with his 2008 Clairette Rancio Moelleux.  15€ - for a 50 cl. bottle.   It had spent three and a half year in wood, with no topping up, so that it had developed some flor, a voile as the French say.  The colour was amber, and the nose and palate rich and honeyed, with dry nutty notes and some balancing acidity.  That’s a totally inadequate tasting note, for a simply delicious wine, but by this time we were beginning to flag.  We had set out at 4 p.m. and it was now 10 p.m. and the light was falling and it was time to go home.   But it was a great walk. 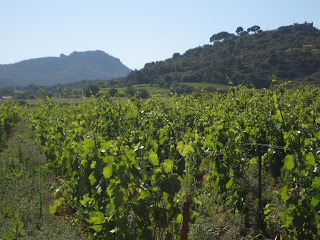