Chateau Trillol in the Corbieres 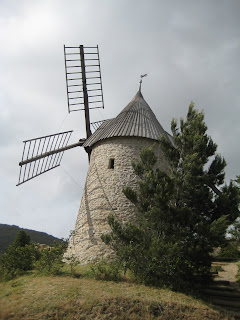 The countryside of the Hautes Corbières is wild and dramatic.   You drive over the hills from Maury in Roussillon, past the ruined Cathar castle of Quéribus, to reach the village of Cucugnan.   On the other side of the valley is the strategic fortress of Peyrepertuse.  Cucugnan features in Alphonse Daudet’s Les Lettres de Mon Moulin, with his story about the curé of Cucugnan, who looked for his congregation in heaven, only to find them in hell.  The village boasts one of the best bakers of France, and an old windmill dominates the skyline, as well as statue of the virgin.  There is a tempting look restaurant, but we were not there for lunch.  Our destination was Chateau Trillol, whose wine won a Decanter trophy in their recent competition.  Also see also my pre-Christmas post.

First some background.  Peter Sichel, one of the eminent members of the British Bordeaux wine trade, first came to the Corbières in the late 1980s and had a coup de foudre for a bergerie at the foot of Peyrepertuse, which he bought as a holiday home.   He then realised that there was terrific potential in the vineyards, and so vineyards were bought and the first wines made in 1990.  Sadly Peter died in 1998 before he could achieve the full potential of the project but Château Trillol is now part of the Maison Sichel, and has been run by Henri and Martine Guiot since 1995. 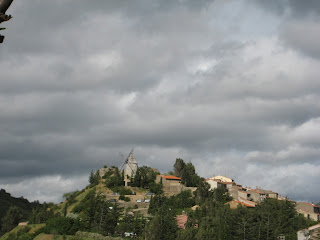 The Corbières is not an easy place to grow vines.  Although essentially Mediterranean, the climate is extreme; the wind is a problem as it can reach speeds of 100 kms per hour or more.  The vineyards lie at an altitude is 300 metres and the soil a mixture of clay and limestone.    Altogether they have 40 hectares of vines, in about 65 different parcels in two main plots, by Quéribus and towards Peyrepertuse..  Sadly time did not allow us to visit the vineyards.  They practice lutte raisonée, and are considering converting to organic viticulture.  The grape varieties are the classics of the Languedoc, Carignan, Grenache, Syrah, Cinsaut, mostly about 25 years old, as they replanted extensively when the vineyards were bought, and for whites, Roussanne, but no longer any Marsanne – it was in the wrong place - and some 100 year old Macabeu.  The cellar is functional, a large shed with the usual concrete and stainless steel vats, and barriques. 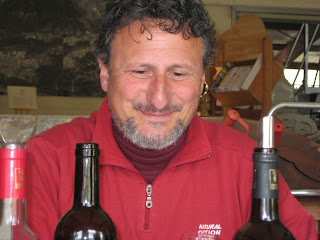 We tasted two vintages of the white Château Trillol, la Dame d’Argent, the 2011 and 2009.
A blend of Macabeu and Roussanne and the two vintages offered an interesting comparison.  The 2009 was partly fermented in oak, just 15% and then given a five months élevage in barrel.   This was an experiment, but Henri found  that the oak removed the fruit and freshness, although it added body and richness.   Now he favours a slow fermentation in vat at 12ºC, taking one to two months, adding that in any case Roussanne has a tendency to develop aromas that make you think it has been in oak, with a certain tannic quality, so it does not need oak.  And three months on the fine lees adds some texture.

2011 – Elegant and fresh, with some white blossom on nose and palate, while the 2009 was more golden in colour.  Quite rounded with nice texture, but a slightly drying taste of oak.  White Corbières is pretty unusual, accounting for just 5% of the appellation.   It requires two grape varieties, with a minimum of 15% in the vineyard for the second variety.

There are just four estates in the villages, Domaine du Grand Arc, and two very small ones, Domaine du Verdouble after the local river, and Les Vingt Citadelles.  The village cooperative has joined up with that of Tailairan.  Thirty years ago there were three local coops, with Rouffiac and Duilhac as well. They initially pooled their resources, but even so failed to survive.   A sorry but not uncommon story.  The village survives on tourism and la chasse, more than wine. 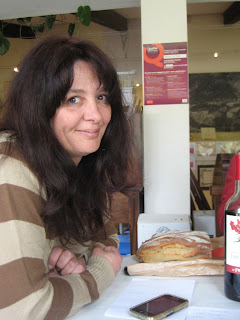 2012 Rosé – 5.90€
85%  Grenache with 15% Cinsaut.  Saigné after a few hours.  Another slow fermentation – it is all treated very carefully.  Henri said he does not like going fast.  A touch of raspberry on the nose.  Nicely filling out on the palate with a vinous touch, good acidity and nice depth and balance.

And now onto reds, all Corbieres:

2011 Le Fruité – 5.90€
50% Grenache, 30% Syrah and 20% Carignan.  20% carbonic maceration, usually for the Carignan. An élevage in vat for four or five months  Medium colour.  Some red fruit with a dry leathery note.  Quite rounded red fruit on the palate, some supple tannins. It is intended for early drinking, but will last.

2008 Château Trillol – the trophy winner  8.00€
The style has evolved.  Up to 2005 it was given a long vinification, with lots of extraction and an élevage in old Bordeaux barriques.  It was elegant, but had lost the freshness of the fruit, which they really wanted to retain.  So they have moved towards less extraction and shorter macerations of 20 – 25 days, with remontages and delestages,.  Henri keeps taking samples and stops when he has enough fruit. And the élevage is in 350 litres barrels, from various different coopers, mostly from the south west, Boutes in Narbonne, St. Martin in Buzet, and a cognac cooper – he has tried Seguin Moreau but didn’t like it.  The oak comes from the centre of France and he varies the toasting, feeling that variety enhances the quality.

The blend is Grenache, 38% Syrah 34% and Carignan 28%- 50% aged in wood for ten months, of which one third is new.  Ripe fruit on the nose and palate; some well integrated oak, with a good tannin balance.  Very elegant. Harmonious and balanced and still very youthful.  2008 was an easy year, with no climatic extremes . 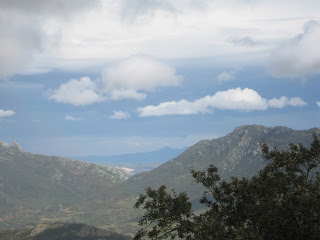 2010
47% Grenache, 28% Carignan, 25% Syrah.  Quite firm young fruit.  Medium colour. Quite firm youthful leathery notes on the nose and palate, with some dry spiciness and silky tannins and red fruit.  However it was a tricky vintage.  They had a terrible storm on 5th May; the temperature fell to 0ºC, with 120 km/hour winds, so the vegetation was burnt.  The vines took 15 days to come to life again, but 20% of the crop was lost. And then there was summer hail.  July was cool and there was 300 mm of rain in two days during the harvest.  Fortunately that was followed by the tramontane, which dried everything up.  They waited for ten days and then started picking.  So a surprisingly successful vintage considering the climatic adversity.  But ready for drinking earlier than 2009

2011 Henri described as fabulous – would that every year was like that.  They had a spring with rain and sun, and good weather at flowering, a little rain in the summer, just when it was  needed, and perfect weather at the harvest.  But none was ready for tasting yet.

The final wine was the Cuvée Prestige, a selection of what they like best, and given one year in new wood. 2009 is a blend of 40% Carignan, 35% Syrah and 25% Grenache, all maceration carbonique.  Deep young colour.  Quite dense youthful smoky oak.  Very silky tannins, rounded and elegant.  Lots of depth and length, and full of promise.   15.00€ 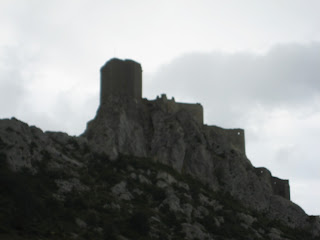 2008 Cuvee Prestige - 15.00€
Half Grenache and half Syrah, and no Carignan, as that did not perform well in 2008. Quite a deep colour.  More rounded nose, very ripe with supple fruit from the Grenache and peppery Syrah notes.  More shoulders; whereas 2009 was more elegant; this is more powerful.

I asked Henri about the tipicity of Carignan.  He talked of fraicheur which comes from the altitude, and elegant tannins, with depth and structure, but not weight.  And what about the putative cru of Quéribus, that was talked of a few years ago, when the cru of Boutenac was created.  No, that idea is defunct. 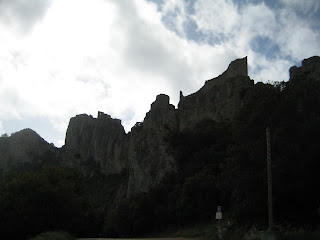