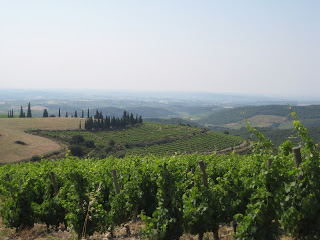 We hear a lot about new wine growers in the Languedoc, but what about the old established estates? Château La Liquière in Faugères is one such example.   The first sales in bottle go back to the late 1960s, of wine made by Jean Vidal.   His son, Bernard, planted his own vineyards in the 1970s and then took over his father’s estate, and these days it is his two children, Sophie and François, who shoulder most of the responsibilities, but it has to be said that Bernard does not strike me as somebody who would ever completely retire.   Sophie admitted that her father is always there when they need him, and her mother is still very much involved in the administrative side of things. 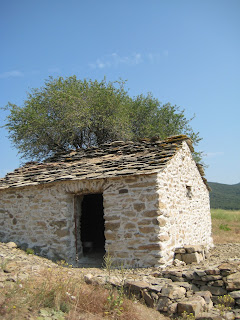 Our visit began with a look at the vineyards.  They took us up to a wonderful view point, at about 400 metres, where you could see Caussiniojouls, Laurens, Autignac and on a clear day you would be able to make out a silvery strip of sea.  On Friday it was simply too hazy in the heat.   And we admired vineyards that Bernard had planted in 1970s and a small mazet that they are restoring.   Bernard talked about the effect of altitude on the quality of Faugères.  Higher altitude suits white grapes and also Syrah; Carrigan performs better at lower altitudes.   There was a gentle breeze, despite the heat.   And since 2012 they have been registered as organic, although they have been practicing organic vulture for much longer.  Altogether they have 60 hectares of vines, in the villages of la Liquière, Caussiniojouls and Cabrerolles, in some 75 plots.  White grape varieties represent 10 hectares, with Roussanne, Grenache blanc, Vermentino, Clairette, Terret blanc, Bourboulenc, Muscat and Marsanne.  And the red varieties are the usual five classics of the Languedoc. 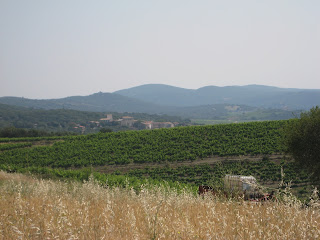 And then we went back to the welcoming tasting caveau in the hamlet of la Liquière.  Their cellar is in Lenthéric – the Vidals come from Lenthéric, but Bernard married a Mlle Gaillard from La Liquière.  François talked as we tasted, and it was immediately apparent that he and Sophie have known how to progress and develop their wines.

2012 Faugères Rosé, les Amandiers – 6.40€
50% Cinsault, with Grenache and Mourvèdre.  Their Cinsaut is only used for their rosé as they do not have enough to include it in red cuvées.  Mostly pressed.  Quite a light colour, with a fresh delicate nose.  The palate is quite structured, with some fresh raspberry fruit.  Rounded with good balance.  François observed that the 20% Mourvèdre adds vigour and structure.  They’ve been adding it to their rosé for the last four years, and it has greatly improved the quality.  Their oldest Mourvèdre vines were planted in 1980. 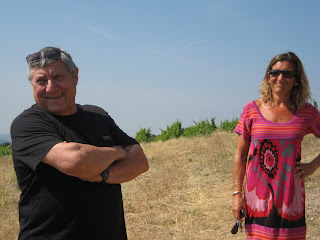 2012 les Amandiers blanc, Coteaux du Languedoc.
From all  their white varieties, except the Muscat, all vinified separately, à la parcelle, and blended in January and it is not Faugères, as the appellation does not include Terret blanc, even if Terret was one of the early varieties of Faugères.  It has the advantage of lowering the alcohol level, ripening at 12˚.  A very simple vinification and certainly no oak élevage.  Light colour.  Lots of nuances on the nose;  a hint herbal, a hint peachy, a touch of white blossom.  And on the palate, a peachy hint, a satisfying bitter note, what they called a legère amertume, and some white blossom and a stony mineral note.

2012 Cistus, Faugeres Blanc – 11.20€
Roussanne is the dominant variety, with some Grenache, Vermentino and Bourboulenc.  20%, part of the Roussanne goes into barrel, and spends six months on its lees.  They put the earlier picked Roussanne into vat and the second picking into barrels, as it has more body, une belle matière. They found that Grenache doesn’t work in wood, and their barrels are 500 litres.  They have given up on barriques and have also tried 400 and 600 litre barrels.   Light golden colour.  There was quite a dry oaky note on the nose, but the oak was better integrated on the palate, which was rounded and rich, with good texture.   Quite a satisfying leesy note.  A slightly bitter note on the finish.  François feels very strongly that white wines from the Languedoc can age, and I would certainly expect this to develop with some bottle age. 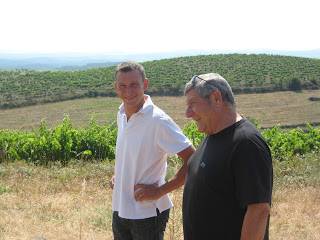 And now on to red wine, beginning with 2012 les Amandiers, Faugères rouge.  6.40€
One third each of Carignan, Syrah and Grenache, with 8 months ageing in vat.   They decide on the blend in January, and the aim is fruit, and that is what they have achieved with some ripe spice and black fruit, lots of black cherries and supple tannins.  Medium weight with a fresh streak, and a lightly tannic streak.  Spicy and gourmand, and very drinkable.

2011 Faugères Vieilles Vignes – 8.90€
Carignan and Grenache, from vines that are over 50 years old.  The cuvée classique of the estate which has existed since the beginning, when they had very little Syrah and Mourvèdre.  12 months in vat – they’ve tried an élevage in barrel, but didn’t like it.  All the grapes are destalked and the vinification is traditional; they have not used any carbonic maceration for their Faugères for the last five or six vintages.  Thirty years ago there used to be a lot of carbonic maceration all over the Languedoc, but these days people are better at mastering a classic vinification  Deep colour.  More restrained fruit compared to les Amandiers.  Spicy fruit and a touch leathery. Some red and black cherries and a ripe finish. Good backbone and structure and drinking well now.

2011 Nos Racines – 11.70€
Carignan, planted in 1900, with just 5% Grenache.  Élevage in vat.  From the best plot – 1.80 hectares, including about 20% of old Terret that was planted, all mixed up with the Carignan.  Old gobelet vines.    Low yield at 15 – 25 hls, compared to the usual 50 hl/ha.   Made for the first time in 2005.  Good young colour.  Quite solid and rounded.  Some grainy tannins.   A very simple vinification.  'C’est la vigne qui parle'.   Quite an elegant Carignan, with some perfumed red fruit.  Quite a dry finish, with some tannins, but also some warmth.  Usually the last vine to be harvested, in late September.  Lots of character and some ageing potential.  Very elegant for a Carignan, and much less rustic than some.

2011 Cistus – 14.80€
60% Syrah, with the percentage depending on the vintage, along with Grenache, Mourvèdre and Carignan.  60% élevage in demi-muids, just the Syrah component, and  the Syrah grown at a higher altitude.  Deep colour.  Quite a firm nose, with a touch of vanilla.  Quite tannic on the palate, with some firm youthful fruit.  Plenty of potential.   A lot of matière,

And we finished with a sympa 2012 l’Unique Gaz de Schiste –9.90€
This is a play on words; schist is the soil of Faugères and gaz de schist is shale gas, which is also a contentious issue in France.  It's a bubbly rosé, 50% Grenache and 50% Mourvèdre, made by the méthode ancestrale, and for the first time in 2011.  The 2012 has 11 gms/l residual sugar.  The grapes were picked early September, three weeks early, in order to retain the acidity. Both varieties are pressed and vinified together, and then bottled.  There is a light filter at bottling and then the fermentation starts again in bottle. Orange pink colour,  and the wine was soft and ripe with some cherry fruit and fresh acidity, and a sweet note on the finish, making a sympa finale to an excellent tasting. 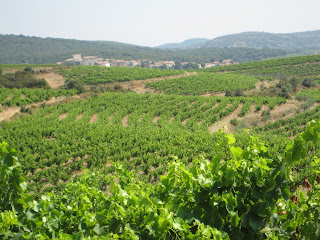