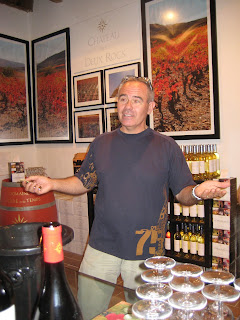 If you are walking through the old town in Pézenas, do stop at no 10, rue de la Foire.   There’s a large door that leads into a small courtyard, which features regularly on the itinerary of the tourist office.  And there you will find a small shop and tasting caveau, called La Terre et du Temps.   This is the new venture of Jean-Claude Zabalia who made a reputation for himself, running the large estate of Château St. Martin de la Garrigue outside Montagnac, for a number of years.  He made one of my favourite Picpoul, not to mention some delicious Bronzinelle.  But he had never really thought about taking on his own vineyard, or if he had, he had dismissed the idea… but circumstances changed last year when St. Martin was bought by Russian investors.  And Jean-Claude found some vineyards that he really liked, namely  the Château des Deux Rocs, in the hills above the village of Cabrières.   As a result he,  and his wife Marie, have gone into partnership with another couple, Eduard and Florence Hennebert, who own la Cure Gourmande, the highly tempting sweet and biscuit shop next door. 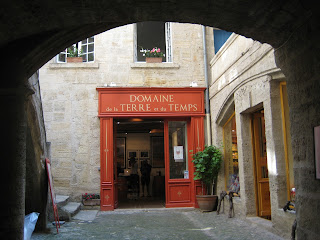 Jean-Claude is particularly excited about the schist of Cabrières.  He has never worked with schist before, but the schist of Cabrières is different from that of Faugères.  Faugères is pure schist, whereas Cabrières also has some limestone outcrops.  The Pic de Vissou,  which dominates the skyline of Cabrières, and which was formed when the Pyrenees were created, is limestone.  Schist soil is acid, but illogically that does not make for acid wine, but for supple flavours.  However, the limestone adds freshness.   And also the vineyards are relatively high in altitude at 280 – 400 metres, which makes for more freshness.  Altogether there are 17 hectares in production, with a further four hectares that have been replanted; Carignan has been pulled up in favour of some white varieties, Grenache Blanc, Roussanne and Vermentino, as well as some Syrah.

And in addition they have bought the two and a half hectares of terraced vines in Aniane on the Massif des Brousses.  These vines constituted  Gérard Depardieu’s Midi project, L’Esprit de Fontaine.  I have tasted this wine a couple of times at the Aniane salon and have found it distinctly disappointing, and also expensive.  However, the problem was not so much with the vineyards, but with the winemaking.  Nobody was really looking after anything properly.  Consequently Jean-Claude has taken over the vineyards as well as the contents of the cellar.  The first vintage that will be properly his will be the 2013.

And the third strand in his new venture is Picpoul de Pinet.  That is the wine that he enjoyed making at St. Martin de la Garrigue.  Apparently it is impossible to find Picpoul vineyards for sale, but he has been able to rent a couple of hectares, so the key decisions in the vineyard will be his.   The picking date is a very important decision; Picpoul ripens late and there is a tendency to pick it too early.   And he also favours an élevage on the lees which makes for more weight and flavour.

So the first bottle Jean-Claude opened was
2012 Mas Autanel, Picpoul de Pinet.  8.90€
The name is an invention; Autan is the name of the wind that comes from the sea and Autanel makes it a diminutive.  The wine had some colour and was quite ripe on the nose, with a similarly rounded palate, with some ripe fruit.  The grapes were picked on 5th October in 2012, as opposed to late September.   There was some satisfying texture, with a hint of a salty tang.

2012 Château des Rocs, Cabrières, Prémices – 7.90€
Cinsaut has always been an important component of the vineyards of Cabrières, with at least 50% in the rosé.  This wine has 60% Cinsaut along with some Grenache, and a little Syrah.  The grapes are pressed, but given a bit of skin contact in the time that it takes to fill the press, as they are handpicked.  There was a little colour, a gentle shade of orange pink, with some strawberry and raspberry fruit on the nose. Some weight and texture on the palate, with some exuberant fruit balanced with acidity, and a fresh finish.   It was delicious.

2012 Château des Deux Rocs, Blanc – 7.90€
This is a blend of equal parts of Muscat and Viognier.  It was quite peachy and aromatic.  Jean-Claude had not worked with either grape variety before and he finds them a little too exuberant and aromatic – his heart is really with Picpoul – so he put the wine into an old barrel for a few months and worked on the lees, which had the effect of reining in the aroma.  Nonetheless it was still quite rich and honeyed and I did prefer the Picpoul.  It will be interesting to see what he makes of his Grenache Blanc.

2012 Domaine des Deux Rocs Rouge  - 7.90€
60% Syrah and 40% Grenache, élevage in vat and bottled in the middle of May.  The assemblage is done as soon as the malo-lactic fermentation is finished.   Medium colour.  Some dry peppery fruit.  Quite a ripe palate with some supple tannins and a fresh finish.   Some very appealing spice, with lots of nuances and some satisfying balance.  A lovely glass of wine.

A second cuvée is also in the pipeline, currently ageing in a barrel and will not be bottled until the autumn.

2010 la Bergerie d’Aniane – 14.90€
The only impact that Jean-Claude had on this wine was in the final blend, of Syrah, Grenache and Carignan.  The wine was in 20hls foudres.  There was some spice with some fruit and some supple tannins.  I also found it tasted a little alcoholic on the finish, although it was only 13.5˚, and there was a slight edge on the finish.   This is definitely work in progress, as Jean-Claude was very much dependent on the less than satisfactory work of others.  So we shall have to look forward to 2013 with Jean-Claude’s first wine, where he has run the vineyards and made the wine. 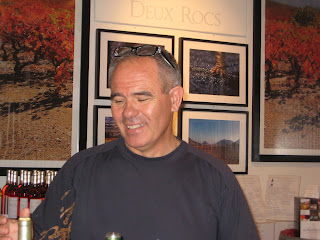 And why Domaine de la Terre et du Temps ?   They represent three things that are very important to the vigneron.  Temps means both time and weather in French, and the vigneron is subject to both. Nor must we forget the importance of the soil.  Jean-Claude complained that so many people ask about grape varieties and forget about soil, and yet that is the basis of everything. 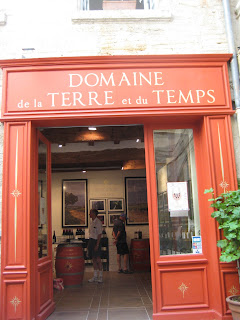