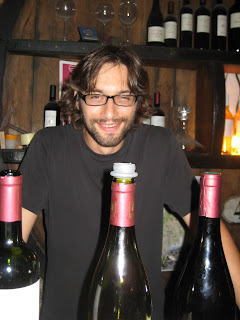 I’ve tasted Jérôme Rateau’s wines at the Faugères fête a couple of times and promised myself a visit.   Haut Lignières was initially created by a Swiss woman, Elke Kreutzfeldt, who sold an insurance business and bought vineyards in Faugères when her daughter married a local wine grower’s son.   Her first vintage was in 1995, and the wine was initially made at the nearby Château de Grézan, until she bought her own cellar, at the top of the village of Faugères, on the main road by the petrol station in 1997.  Subsequently, she acquired a second cellar, where Jérôme now makes his wine.   Then after a spell of ill-health, she decided to sell, and in 2007 Jérôme bought the property with its two cellars, and  twelve hectares of vines.

He comes from Normandy, from the Perche, and had no connections with wine at all, other than a grandfather who had a small plot of vines in champagne, and a father who loved wine.  He remembers helping with his grandfather’s harvest as a small boy, but certainly had no ambitions to make wine.  He had initially planned a career in sport, but was forced to rethink following an injury.   He also enjoyed science, particularly biology, and that led to a degree in oenology at Bordeaux.   His first job was to work for a large Bordeaux estate on the right bank, which produced 10,000 hls a year.  There he learnt a lot, mainly what not to do, and then he worked as a consultant oenologist, and is quite entertaining about how people respond to an oenologist’s advice, and whether they take it or not.  And often they employ an oenologist as what they really want to know what their neighbours are up to!  And then Jérôme realised that what he really wanted to do was to make his own wine.   He wrote a business plan and enlisted support from his parents, and after a lot of looking, initially in Bordeaux, and then extending his horizons, he eventually came to Faugères and bought Haut Lignières in time to help with the 2007 harvest.    He was taken by the terroir, the slopes of Faugères and the schist soil.

The estate consists of twelve hectares in Cabrerolles, in one large block, planted with the usual five varieties of the Languedoc, and Jérôme has also taken on another three hectares en fermage.   The lieu dit of the plot is Bas Lignières, so for the Swiss the name Haut Lignières was a natural corollary.  And he has planted just 36 ares of white varieties, Roussanne, Grenache Blanc and Vermentino but has yet to produce any white wine.  The vines are taking their time to get established.

We tasted in his cheerful tasting caveau at the top of the village street. 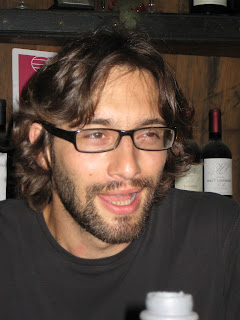 2012  Faugères, Rosé  - 6.50€
A blend of Cinsaut, 60% Grenache 30% and 10% Syrah, all free run juice.  The juice gets darker depending on how long it spends on the skins.  If you are running off juice, saigné, to concentrate your red wine, you should never run off more than 20% but as this for rosé, 50% is run off, and the Cinsaut is picked earlier than it would be for red wine.  The nose is very fresh, and the wine very refreshing, with good acidity and some minerality and a dry finish.   Jérôme observed that it is very easy to make a rosé that smells of raspberries and bonbons anglais.  It is all to do with the volatile esters, and depends on the cultured yeasts and the fermentation temperature.  That sort of rosé doesn’t usually have any staying power.

2011 Faugères, le ler - 6.50€
All five varieties of Faugères, about 20% each.  Usually blended in March and bottled in July, after an élevage in vat.  A simple vinification and a short maceration.  Medium colour with ripe black cherry fruit.  The most representative of his Faugères.    Supple ripe fruit, with a lightly tannic streak.   'This is what Faugères gives me', he said; 'with the other cuvées  I try to see what I can make from Faugères'.

2011 Faugères, Romy – 8.50€
The blend in 2011 was 50% Grenache and 35% Mourvèdre, with 15% Carignan. The Carignan was aged in barrel for ten months, with the rest in vat.  In contrast in 2012 the blend is one third Syrah to two thirds Grenache, with no Carignan, and all aged in vat.  In 2012 the Mourvèdre was disappointing.   Jérôme is guided by the character of the vintage, while retaining the style of the wine.  That is the advantage of having five grape varieties to play with.  The 2011 has a good colour, with rich spice and fruit with a good backbone and a harmonious balance.   He wants something that is rounded, silky and elegant.  The oak gives an extra touch of spice and is beautifully integrated.

2011 Faugères, Carmine Butis. – 13.50€
60% Syrah, 35% Grenache and 15% Mourvèdre.  70% aged in barriques for about 15 months.  He has lots of barriques of individual grape varieties and then blends after the first racking and keeps the blended wine in barrel for a further twelve months or so.  There is a vanilla touch on the nose, with a sturdier denser more youthful palate, and a rich finish.

2009 Faugères, Grande Réserve – 18.00€
Half Syrah / half Grenache.  This is not made every year.  And it is made with great attention to detail and a lot of work by hand.    The berries are individually destemmed, entailing  a meticulous sorting.  Fermented in a barrel, with a daily pigeage and a long slow gentle extraction of two months. Twenty barriques give 3000 bottles. Run off by gravity and not pressed.  Quite rounded by powerful, mouth filling with spice, very harmonious.  Well integrated tannins and oak and with good depth.   Great future potential.

In 2011 Jérôme had a stagiaire who was particularly interested in natural wine, so the stagiaire was allowed to experiment – the result was that one barrel was brilliant, and two were sent to the distillery!  So 280 bottles will be bottled as Empreinte Carbone, a pure Syrah, the result of lots of TLC in an 18 are plot of vines.  Jérôme is dispassionate about natural wine observing the problem of the uncertainty with them – they are simply not reliable, and also people are tolerant of their defects because they are natural.  He doesn’t fine his wine and his only filters the Faugères le ler and the rosé, as they are bottled earlier.  Nor is he organic.  He may use a small amount of a systemic product, which then reduces the amount of copper and sulphur he would have to use.  And he only treats if absolutely necessary.

And then we talked about the future.  He has no ambitions to grow much bigger, maybe twenty hectares at the most, or  maybe fewer vineyards might be better, so that he could look after them better.  And he also wants to make a white wine.

And then he finished with a cautionary tale.   He has been the victim of a scam with fake bottles of Haut Lignières being sold on line.  So check the small print on the label, or stop off in Faugères and buy some from his welcoming tasting caveau. 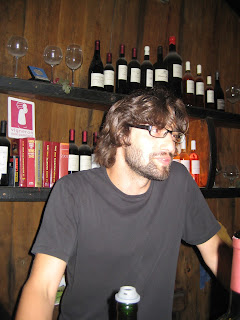