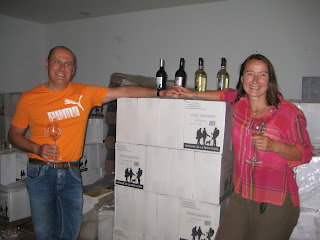 Domaine de la Rencontre  is a new estate in the appellation of Muscat de Mireval.  Enthusiasm is infectious.  If I were starting a new venture in the Languedoc, I am not sure that one based on Muscat would be my first choice, but that is what Julie and Pierre Viudes have done, making their first wine in 2010.  I spent a couple of hours talking and tasting with them a week or so ago, and came away convinced that they are going to succeed. 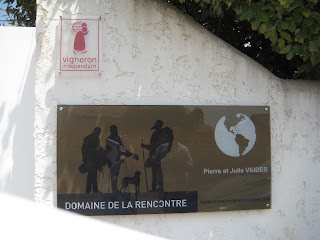 Neither of them have any immediate links with wine.  They met in Mexico, and that is one reason for the name of their estate.  It also relates to the painting by Gustave Courbet called la Rencontre, or the meeting, which is said to have been painted close to their vineyards, in 1854, with a view of the Mont St. Clair in the background.  There is a Route Courbet, which covers seven paintings in seven villages and la Rencontre is set between Vic la Gardiole and Mireval, the villages of the appellation of Muscat de Mireval.  But back to Pierre and Julie.  She was working for a Swiss company in London and had colleagues who keen wine enthusiasts.  Pierre had worked in prêt a porter and had also been an actor – he observed that this is a useful skill in salons; he has learnt to play to his audience very effectively.  And he was looking for a change, and went to Mexico and that is how he met Julie, who happened to be travelling there too.

And why Mireval rather than anywhere else?  Pierre in fact comes from Sète, so in a way he has come back to his roots.  They had also looked in Sigean, for Fitou, Limoux, Minervois and the Costières de Nimes, but meanwhile Pierre’s parents had a friend with vineyards in Frontignan, so he went to work for him.  So at the beginning of 2005, he became a viticulteur, working for a member of the coop, who really knew how to convey his love of vines, and the next step was to sign up for a course at the Lycée Agricole, on viticulture and oenology, three days a week.   And Julie found herself spending her weekends pruning.   They talked of their own wine estate; Pierre was hesitant, feeling that the time was not yet right, but Julie was certain it was, and she convinced Pierre, who realises that she will encourage him to go further than he might ever have imagined.   ‘Our vines are our children’, she observed.

So in 2008 they bought 7.5 hectares, one plot in the garrigues overlooking the sea.   At the they did not even own a bucket or a pair of secateurs.  And in 2010 they bought a house, with an adjacent building for a cellar.  The 7.5 plot is committed to the coop until 2014, so in 2009 they took on 5 hectares en fermage, and made their first wine in 2010, just 6000 bottles.   Their harvest in 2011 totalled 10,000 bottles, and in 2012, 13,500 bottles.   And they make several wines, a Muscat Sec, Entre Deux, a neat name for the moelleux, with 30 gms/l of residual sugar, and two classic Muscat de MIreval, a cuvée from young vines, and a cuvée from older vines. They are also planning a sparkling méthode champenoise. 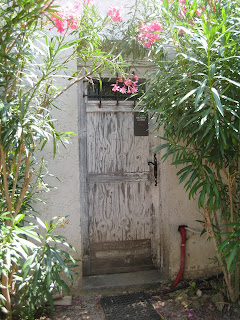 They have a neat cellar, with stainless steel tanks, and cooling equipment.  A gentle pressing, avoids any herbaceous notes.  They chill the juice down from about 25⁰C to 5 - 6⁰C in 10 hours, and then rack it and let it ferment.  They felt they were losing a lot of aroma by throwing away the bourbes, the big lees, so now they have a new filter which enables them to filter the lees and include them in the blend.  You sense that they are continuously searching to improve their wines, and that nothing will ever stand still. 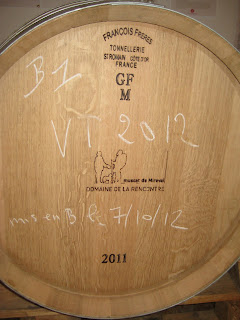 And then we tasted:

2011 Rencontre, Muscat Sec, Pays de l’Herault – 9.50€
They prefer Pays de l’Herault to Pays d’Oc, which has a more restrictive cahier de charge.  With Oc you cannot make Vin Doux from the same vineyards as a Muscat Sec whereas the Pays de l’Herault allows you to keep some grapes back for a dry wine.  ‘We impose our own constraints’, they said.   Light colour, quite a delicate note.  Fresh,  dry and grapey and the nose, and on the palate, dry and pungent with some depth.  A nice bite; herbal and pithy.

2012 Rencontre
Light colour; quite fresh and youthful and less evolved, still quite closed with a firm mineral note.  The soil of Mireval is clay and limestone, and there is also some sandy silt.

2012 Philosophe, l’Entre Deux, Pays de l'Herault   - 10.00€
In other words between the dry and the vin doux in sweetness, with 30 gms/l of residual sugar.  Light colour, a hint of honey, and more so on the nose.  Quite rounded and ripe, with some fresh honey.  It is a blend of dry Muscat, picked a little later and blended with just 15% some late harvest Muscat that was fermented in oak, from the previous harvest.  With just 15% they can put the current vintage on the label. 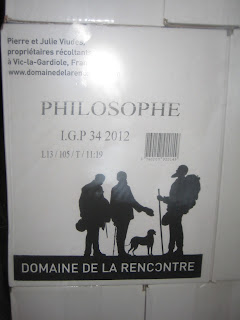 2011 Hédoniste
Light colour; quite a lemony nose and more concentrated palate.  Ripe and rounded with quite a rich finish.

2010 Hédoniste.
Light colour, with citrus notes on the nose.  And on the palate rich and honeyed, rounded and maturing nicely, though still tastes quite youthful with a certain concentration.

2012 Éclat, Muscat de Mireval,
From 25- 30 year old vines.   The two vineyards are side by side, but give quite different results, even though they are treated exactly the same way.  Not only is the vine age different, but also the rootstock.  Quite lemony, with fresh honey and good acidity.  Nicely rounded and elegant.  Hédoniste is fresher with lower sugar; this is richer, but certainly not cloying. 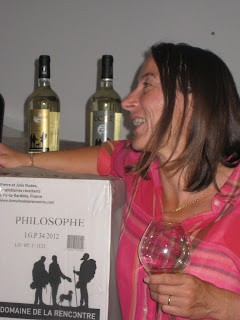 2011 Éclat
A touch of caramel, and more so on the palate., and generally heavier than the 2012

2010 Éclat
Light colour; quite a lemony nose.  Quite intense honey, with a certain note of maturity.  Rich honeyed finish, with some weight.  This was their very first wine and it was given 2 stars in the Guide Hachette, so an exciting debut.

And we finished with some experimental barrel samples, some more successful than others.   It became apparent that Muscat is going to be aged in oak, it should be fermented in oak, to enable the wine to marry properly with the oak.

Muscat de Mireval is a small appellation, covering the vineyards of Mireval, Vic la Gardiole and also Maguelonne, with just nine independent producers and the coop in Mireval, with 170 hectares.  However, there is a sense of energy; the coop is much less important than in Frontignan and new people are coming into the appellation.  It was in danger of being swallowed up by Frontignan, and does need somebody to put it more effectively on the map.   And as I have said before, Muscat, particularly sweet Muscat, is not easy to sell, but I came away with the feeling that Pierre and Julie are undeterred and that they will go far.  I do hope I am right. 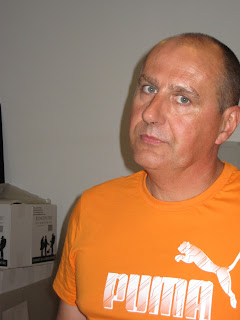