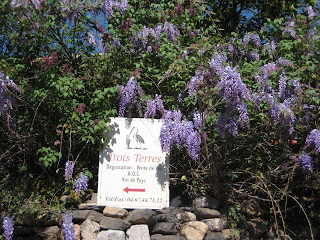 Graeme Angus leads a double life; he works as a GP and as a vigneron.   No prizes for guessing which he prefers.     Over ten years ago he took the decision to leave the rat race of the London medical world and settle in a little village in the Languedoc, so 2004 was his first vintage.  He now has four hectares of vines, with nine different parcelles in three villages, Cabrières, St. Jean de la Blaquière and Octon.

At St. Jean de la Blaquière, most of his vineyards are Grenache, planted at 180 metres, so benefitting from the freshness of the altitude.  In Cabrières, Syrah on schist is the main variety, so that makes for two different cuvées, a Terrasses du Larzac based on Grenache and a Coteaux du Languedoc based on the Syrah, with the grapes from Octon providing extra blending options.   And sometimes he makes a  bit of rosé.  Yields are tiny, 20 hl/ha,  so he is lucky if he makes 10,000 bottles in a year.   His tiny cellar is underneath their house in Octon, just along the road from Mas des Chimères.  You sense that Graeme is quietly passionate about he does, questioning it with a scientific mind, and he is ably supported by his wife Alice. 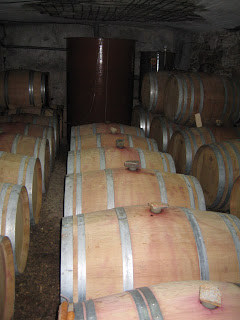 We went along for a catch up tasting –

2010 le Saut du Diable, Terrasses du Larzac. – 10€
Grenache, with some Carignan, Syrah and a little Cinsaut.  The Grenache vines are 45 years old.  2010 is a vintage to keep.  Graeme considers his keeping vintages to be 2005 and 2010, while 2011 and 2012 are earlier maturing wines.  And this 2010 spent about 12 months in barrel.  That varies with the quality of the vintage; 2007 was a fruitier year and was only given 8 months, where 2008 was a much more closed year and got 18 months in wood.  The vinification was very simple, natural yeast and some sulphur.  Graeme used to keep each variety and plot separately but now that he knows his wines and vines better, he tends to blend earlier.   A deep colour.  The lovely ripe fruit of Grenache with some firm spice and freshness from the altitude.  The tannins are still pretty furry, with good mouth feel.  Definitely a wine to forget about.

Then Graeme remembered his rosé, 2012, from a Syrah grown in St. Jean de la Blaquière.  It comes from a particularly vigorous part of the vineyard that gives large juicy grapes.  And was trod by foot.   Very perfumed fruit with good acidity.  Ripe strawberries balanced by acidity.  And is Vin de France to avoid any bureaucratic hassle.  7.00€

2009 la Minérale, Coteaux du Languedoc – 9.00€
80% Syrah from Cabrières, with some Cinsaut and Grenache.  2009 was a hot vintage and Graeme found it a difficult vintage, but he has certainly pulled it off.  Deep young colour. Quite solid and dense, some perfumed fruit and quite firm tannins.  Quite a solid confit note on the finish.

2006 la Minérale
The first vintage of this cuvée  was vin de pays d’Oc as it is pure Syrah.   Deep young colour.  Firm and concentrated.  Some perfumed Syrah fruit.  Youthful and peppery and still quite tannic.  Apparently this has taken ages to come round; 12 months ago it was still overwhelmingly tannic, but it now very satisfying, with fruit as well as tannin.

2011 le Saut du Diable
Not yet bottled.  The nose is a bit reduced, and the wine needs racking, but there is nothing wrong with that; it is just having an adolescent grunt.  And the palate has ripe cherry fruit, with some freshness.

2010 la Minérale has just been bottled.  This was a great year for Syrah.  Deep young colour.  Quite a firm nose, with some black fruit.  And on the palate it is solid and rounded with perfumed fruit and tannin.  Very youthful with freshness on the finish.  It just needs time.  And Graeme likes to give his wine some bottle age.

2012 barrel sample – the future Saut du Diable, with some lovely ripe fruit and fresh cherries.  And some supple tannins.  This had a shorter, ten day, maceration to make it readier earlier.  In the past Graeme has gone for long macerations, gradually reducing from eight weeks down to three or four.

2012 La Minérale, Syrah with some Grenache and Cinsaut.  Another barrel sample.  Fresh fruit on nose and palate, with a tannic streak, but very fruit driven, with some lovely perfume.


And we finished with a barrel sample of some Syrah from St. Jean de la Blaquière.  Graeme is particularly pleased with it, but is not sure what to do with it, as he does not want to add it to la Minérale.  I could see why he likes it so much – it was beautifully perfumed, with ripe fruit, liquorice and black cherries and some tannin, and a harmonious finish.   A great finale to our tasting.  And afterwards we were invited to lunch under the shade of a large mulberry tree. 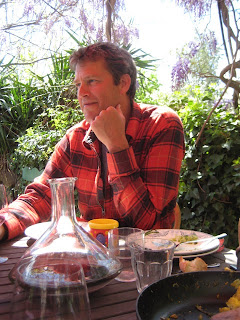 Unknown said…
The Best Slots | Casino Roll
The best slots at https://deccasino.com/review/merit-casino/ Casino deccasino Roll. If you love casinosites.one table games, to play blackjack, you have to bet twice https://vannienailor4166blog.blogspot.com/ for the dealer to win. The dealer must casino-roll.com
10 April 2022 at 18:22