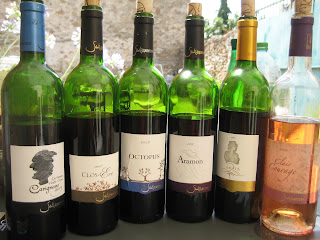 A chance encounter over dinner led to new discovery just down the road in the next village.  Erna Senti Kreyden has a tiny cellar in the back streets of Gabian.   She comes from Switzerland; her parents made wine, Pinot Noir and Riesling, in the Graubünden or Grisons region of Switzerland, but she worked in the financial industry, before rediscovering her viticultural roots.  She explained how she and her husband would come on holiday to Marseillan Plage with her sister’s family, but they didn’t want to spend all day on the beach, so they explored the countryside and one thing led to another, in the form of some olive trees and a tiny vineyard of old Counoise, which they bought in 2005.  That is one of the thirteen grape varieties of Châteauneuf-du-Pape, but is found less often in in the Languedoc.   And things have taken off from that.  Erna made her first two vintages in Verena Wyss’ cellar and studied, and in 2008 gave up the day job to concentrate on wine.

She now has six hectares, in eight tiny plots.  She wants to remain small.  You sense that she pays great attention to detail; everything is finely handcrafted; she believes that if you work hard in the vineyards, the work in the cellar will be much easier.   However, for the moment, space is a problem; her courtyard was full of new barrels the day I visited, but she is hoping for planning permission for a new cellar on a hill outside the village.   The mayor in Gabian has said yes; and then the proposal has to go to Béziers, and then to Montpellier, so with a bit of luck, she might be in her new cellar for the 2014 vintage. 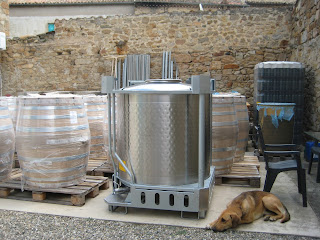 We sat in the courtyard and tasted under the shade of a large umbrella.  First was:

2012 Clair Courage rosé, Pays de Cassan – 9.00€
A pure Cinsaut, but this is the last vintage from this vineyard, as the vines are elderly and no longer very healthy, so sadly she is pulling them up.  The grapes are pressed and the colour is a pale orange pink.  And the nose is dry and stony, with a hint of raspberry; it is quite vinous with good body, with a fresh savoury finish.  It does a malo-lactic fermentation, which is unusual for rosé In the Languedoc.  Erna explained that she wants to use as little sulphur as possible.

2011 Aramon, Vin de France – 12.00€
This wine was a surprise.   Aramon is one of the despised varieties of the Languedoc.  Erna's vineyard was planted in 1960.  In the bad old days it produced enormous bunches of large grapes in enormous quantities. Erna keeps her Aramon under control, with only a couple of bunches per vines.  It has quite a deep colour, with rich spicy fruit, savoury, with black cherries and supple tannins and a dry finish.   The tannins on the palate were quite silky, almost like a Pinot Noir only richer.  Very intriguing, and unexpected.   She has a photograph of the previous owner of her cellar, as a little girl holding a very large and obviously heavy bunch of Aramon.   This is part of the history of the Languedoc. 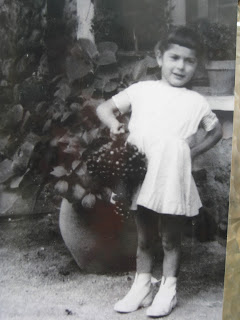 2009 Counoise, Octopus, Pays de Cassan – 15.00€
12 months in new wood.  For the rest of her wines Erna favours ageing in oak, in 500 litre barrels.  She feels that the process is more natural than keeping her wine in stainless steel vats.    She just uses her small vats for fermentation.  And she favours pigeage, by hand, with what she called a Stampel – I am not sure how that would translate in either French or English.  See photo!  Good colour.  Some smoky oaky fruit on the nose.  On the palate medium weight, a streak of tannin and some perfumed fruit with an elegant finish.  The oak is present, but nicely integrated. 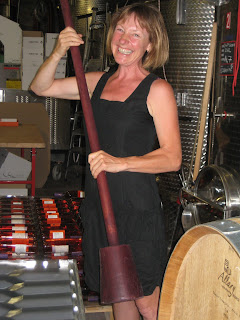 2008 Clos d’Eve, Pays de Cassan – 15.00€
The vineyard is surrounded by terraces and walls and there is a fig tree, hence the name of the wine.   A pure Grenache, 35 years old, and again 12 months in barrel.  Medium colour.  Richer and riper than the Counoise, with some cedary notes on the nose and even more so on the palate.  Both elegant and rich, and beginning to mature.

2009 Carignano, a pure Carignan.  -18.00€
She has just 60 ares of Carignan, with a yield of 25 hl/ha.  And Carignano was the name of the now defunct coop in Gabian, and the Occitan name for Carignan.  Again twelve months in oak.  Quite a punchy oaky nose, and a sturdy gutsy palate, with tannins and fruit.  A tannic oaky streak but with good fruit underneath.  Youthful with plenty of potential.  The label is a face made of layers of schist.

2009 Syrah,  Amada, Pays de Cassan – 18.00€
The youngest vines, 18 years old.  Quite a deep young colour, with dense smoky fruit on nose and palate, and a solid oaky streak.  I did not find it very expressive at the moment, and suspect that it is going through an adolescent phase, but will turn into a stylish adult.  The label portrays a marble sculpture of a lady’s head, with grapes in her hair. 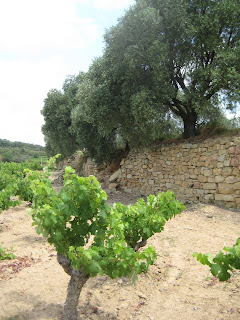 And then Erna took us to see some of her vineyards in the hills behind Gabian.  She is experimenting with her Carignan.  Carignan has lots of leaves, which are usually left to flop around like an unruly hairstyle, but she has trained hers high on wires. 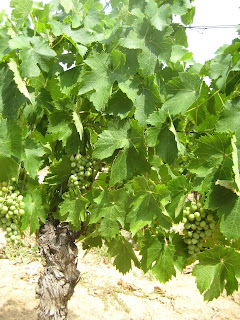 The Aramon already has large bunches of grapes, at the end of July; and we stopped at the site of her potential cellar, and the very first vineyard of Counoise, and saw the Syrah grown on bauxite with a view of the chateau de Cassan in the distance. 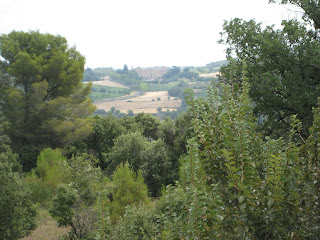 Alan March said…
Gabian is becoming a little haven of good winemaking it seems with Turner Pageot, Wyss and now this. But look at those prices, one thing I have noticed this summer is the hike in prices!
21 August 2013 at 20:15

Rosemary George MW said…
It's all to do with the coop having closed, so there are now some very good vines, and old vines available. I am going to see another new Gabian producer in a week or so, so watch this space.

I agree that Erna's wines are not cheap, but they are hand-crafted. I think she has a good market in Switzerland, a country more tolerant of higher prices.
27 August 2013 at 16:28