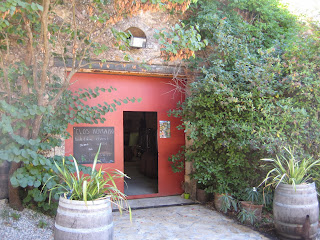 Clos Romain had come to my attention as a new producer in Cabrières. The estate is off the road north of the village of Cabrières, heading towards Villeneuvette and Clermont l’Hérault.  I realised that I had driven past it umpteen times without noticing a discreet sign by a closed gate.

Romain Cabanes has had an indirect journey to wine. He was born in Paris and studied law.  Meanwhile his father, who was born in Clermont l’Hérault,  had bought some vineyards and olive trees, as well as garrigues, which contained some Roman remains, just outside Cabrières.  .The property was rented, but not very satisfactorily, and the final result was that Romain took over the running of the farm.  It was either that, or sell.  Romain admits that he is un peu sauvage de caractère;  the place suits him well.  At the beginning he had no water, no electricity, no tracks through the property, and some very steep vineyards.  The vines were committed to the local Cabrières coop and that is where they stayed until 2007.   It was a problem of treatments in the vineyard.  Romain wanted to be organic, which did not fit in with the coop.  Nor do small quantities suit a coop.  It took three years to convert the vines to organic viticulture.  Everything takes longer, a whole week with a mower, rather than four hours with some weed killer. 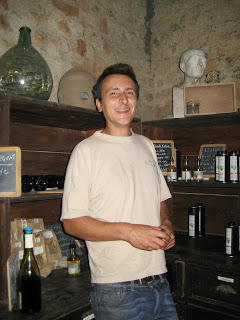 He has 200 hectares of land, with just six hectares of olive trees, and four hectares of vines, and lots of garrigues, with sheep.  It is a windy hilly spot, going up to 320 metres.  His cellar is a 100 year old barn at the bottom of the hill.   The soil is the schist of Cabrières.

Romain made his first wine in 2008 and now works with his wife, Céline Beauquel.   She has studied in Pézenas and he observed that she was more technically minded than him.  They only make red wine; Romain said for the simple reason that they prefer red, but there are also economic and ecological reasons.   Making rosé consumes much more energy, and Romain would prefer to work by gravity, and use the wind for energy. But maybe he would like to try a white. He has planted some Viognier and currently adds it to his Syrah.  And for red varieties he has Syrah, Grenache, Carignan and Cinsaut, which are about 35 - 40 years old,. And he also admits to a planting of Pinot Noir, because he likes that variety, but it is not yet in production.  That will be interesting in due course.  He aims for minimal intervention in the cellar, and uses as little sulphur as possible.  He has stainless steel vats, as well as barriques, some of which are used for fermentation with a top removed,  and then there are amphora.

2012 Parenthèse, Cabrières,  – 10.00€
A Syrah Viognier blend, co-fermented, as in Côte Rôtie.  Deep colour.   Spicy nose with ripe black fruit.   An appealing freshness, with ripe fruit on the palate, some acidity and soft tannins.  Rounded and supple.  Lovely balance and very harmonious.  Romain suggested serving it chilled.  The élevage is in stainless steel.

2010 Rêves Enclos, Cabrières
Mainly Carignan with some Syrah and Grenache, vinified and aged in stainless steel.  Quite a deep young colour, with rich black fruit on the nose. A rustic fruity note on the palate, from the Carignan, I think. Quite a concentrated palate.

2011 Patience, Cabrières - 12.00€
Syrah, Grenache and a little Viognier, in barrel, for both the alcoholic and malo- lactic fermentation.   However, Romain has never bought new barrels and wants any oak effect to be discreet.  These come from Mas de l'Ecriture, so a good address.   Romain likes those from Seguin Moreau best.  The palate is intense and ripe with a firm tannic streak, and again quite alcoholic on the finish at 14.5⁰, but the oak is nicely integrated, but with quite an intense and concentrated finish.

2011 Phidias.  -15.00€
After a Greek sculptor and also the name of his dog, who kept his company and boosted his morale when times were tough right at the beginning. A blend of Syrah and Grenache Noir,  blended in the vineyards and fermented in amphora 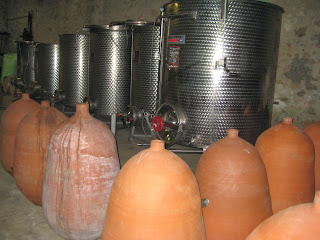 Deep colour.  A certain spicy note.  Medium weight with fresh fruit on the palate, balanced with some lovely rich spice, and a lightly tannic steak.  A rich but elegant finish.  Drinking very well now but will also keep.  A wonderfully original wine.

Does anyone know of anyone else who uses amphora in the Languedoc?  The amphora come from Castelnaudary.  Romain believes that they allow for the micro-oxygenation of the wine, for élevage without using a barrique, making a very viable alternative to wood, and also making the wine more resistant to oxygen.  He thinks that the wine evolves quicker than when the élevage is in wood.  The assemblage is the same as for Patience, but the two wines tasted quite different, and I found Phidias fresher and noticed the alcohol less, even though it was the same.

And there was one last wine that was not available for tasting, La Soliste, which was made in 2012.  It is a blend of three different vineyards of Syrah and promises to be very rich and powerful.

A fascinating example of a thoughtful wine grower, who with his wife is challenging preconceived ideas, with the refreshing approach of a newcomer to wine. All Romain’s wines are sold by vente directe and the Marché Bio in Villeneuvette on Tuesday evenings in the summer  between 5 and 8 p.m is a good source. 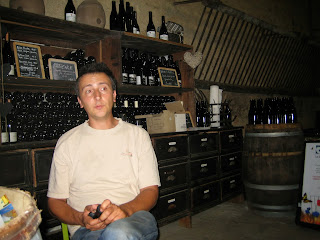 Graham said…
There is a bio and natural wine fair on 12/13th April 2014 at Clos Romain.
Went there last April on a freezing Sunday. Cold (less than 10 degrees?) in the open chai and for some reason warming Languedoc wines didn't work at that temperature while lighter wines from the north showed much better.
27 November 2013 at 14:19

Rosemary George MW said…
Thanks for letting me know - with luck I'll be there.

That's interesting about temperature. I usually find that northern wines - say Cabernet based wines, do not work for me in the Languedoc, but I love them in London. Maybe it is a question of weight, but a cooler temperature can also make things taste more tannic.
27 November 2013 at 18:45