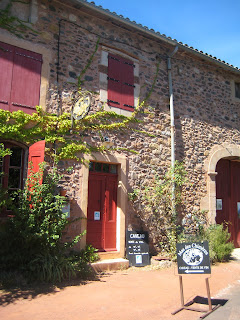 I first visited Guilhem Dardé when I was researching The Wines of the South of France, back in the late 1990s, and I have tasted his wines on several occasions since, most recently on the Terrasses du Larzac balade.    When I saw him in mid-September, he began by observing that he was about to embark on his 40th harvest.   And the grapes were looking good.  Ideally he would like a little rain to refresh everything, and that has since come, and hopefully not too much.    It is a late harvest; much later than what has been the norm in recent years.

Guilhem has lived in Octon all his life.  He talked about life in the village and compared it with neighbouring Salasc.  There is a big difference; Salasc is a richer village as it has water, so that agriculture is more successful.  People there could grow wheat.  Octon does not have the fine houses of Salasc.   It has suffered from rural depopulation; the school almost closed down.  It was a village of polyculture; as well as vines, they had sheep.   Roquefort cheese was actually made in the village, and transported to Roquefort for ageing.    Guilhem reminisced.  His father was the first to buy a tractor in Octon in 1968 and two years later they sold their horse.  They acquired a mechanical harvest and used it until Guilhem decided to leave the village coop, in 1993.  He has twenty three hectares of vines, all around the village of Octon, but he has no idea exactly how many small plots.  They are all on the terres rouges around the lac de Salagou.   The smallest is 17 ares, and the soil is quite clayey, with basalt.   Happily his daughter Maguelone is interested in following in her father’s footsteps. 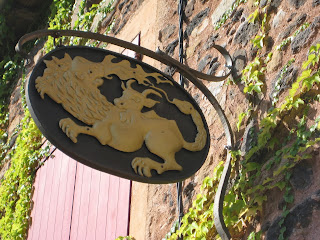 We talked about irrigation.  Guilhem is not against irrigation, and he prefers aspersion to goutte à goutte or drip irrigation.   A good spray is like the equivalent of a storm, and washes the leaves, removing dust and any residue of treatments and is best done at night, whereas drip irrigation simply maintains the humidity and keeps the soil damp so that the vine does not search for water.  It also encourages the vine to produce too much vegetation.   Guilhem observed that we bless the sky for a storm and damn somebody who sprays water.  You apparently can get subsidies for installing drip irrigation.    We also talked about sulphur levels.  You are allowed up to 100 mg/l free sulphur even in organic wines, and the label must mention sulphur once there is  as much 10 mg/l.  Guilhem’s levels are very low, 10 – 20 mgs/l.  He uses as little as possible.  And the best bottling weather is with the north wind.  They use a mobile bottling machine and consult the lunar calendar; fruit days are best, but it depends on the wine.  And they produce 60,000 bottles per year.

And then Guilhem’s wife, Palma, appeared, and said: you haven’t even got the glasses out yet.   Aren’t you going to give them a taste? So bottles were opened and glasses charged. N.V. Salagou Rouge, Vin de France  - 5.80€
A blend of Syrah, Grenache and Terret Noir, intended for easy drinking.  Medium colour; quite rounded, a touch of tannin and acidity.  Dry cherry fruit, with a fresh note on the finish.

2012 l’Oeillade, Coteaux du Salagou – 7.00€
Quite a light red.  Delicate cherry fruit.  Quite a light palate with fresh liqueur cherries.  A streak of acidity and tannin with a fresh finish.   There is confusion about the name Oeillade; is it the same as Cinsaut or not?  Guilhem is interested in other grape varieties that have almost disappeared, such as Picpoul Noir and Ribeyrenc, and he has planted some Counoise, which is now allowed in the Terrasses du Larzac.

2010 Nuit Grave, Terrasses du Larzac – 10.00€
Syrah dominant, with some Mourvèdre and Grenache.  Guilhem planted his first Mourvèdre in 1995.  Medium colour.  Quite rounded smoky nose; quite ripe with a tannin streak on the palate and a fresh finish.  Still very youthful, with ageing potential.  It is aged in 400, 500 and 600 litre barrels; Guilhem buys older barrels.

2011 Nuit Grave
This was a good vintage, Same assemblage and élevage.   Some spicy cherry fruit.  Blended in March, and drinking very well; Guilhem observed that the older vintage fades, s’efface, for the new vintage, and then returns.  Very fragrant and elegant fresh fruit. 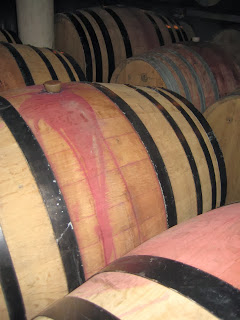 2004 Coteaux du Languedoc,
The same wine, but not yet Nuit Grave, or Terrasses du Larzac.  50% Syrah, 30% Mourvèdre and 20% Grenache.  2005 was the first vintage of Terrasses du Larzac, and 2004s could use the appellation retrospectively, but Guilhem didn’t bother.  Deep colour with notes of maturity.  Smoky leathery nose, with mature note.  Some fresh cherry, griottes on the palate.  Quite mature and elegant, with a good balance.  On its plateau.  And a lovely example of mature wine from the Languedoc.

2011 l’Hérétique, Coteaux de Salagou. – 8.50€
Mainly Merlot and Cabernet, with just a touch (4%) Syrah.  Guilhem remembers when subsidies were paid to pull up Carignan and replace it with Cabernet and Merlot.  Deep colour.  Quite firm dry fruit, dry cassis on the palate, with some firm tannins, and a certain freshness on the finish.  Quite leathery with some body and weight.   I prefered Caminarèm.

And our tasting finished with some white wine:

2011 Coteaux du Salagou blanc.
An intriguing blend of Viognier, Terret, Grenache Blanc Chardonnay, Carignan Blanc, Clairette and Roussanne.  Rounded and textured with some dry herbal notes and white flowers and balancing acidity.  Lots of nuances. With depth and length and a touch of oak, with a rich dry finish.  It has spent time on the lees, but without any bâtonnage, and is gradually blended.  The Chardonnay goes into barrel, and some Viognier might too.

2011 Muscat à petits grains – 6.00€
Very perfumed nose.  Very Muscat, you can almost crunch the grapes.    A hint of honey and very perfumed with some weight and a fresh finish.  A hint of the bitterness that is typical of Muscat on the finish.

And then we went to almost deserted village of Celle, which was drowned when the la de Salagou was created as a reservoir, and found a shady spot for a picnic on the lake shore. 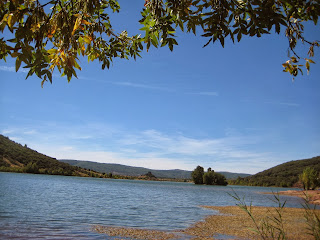 Alan March said…
Ah, L'Oeilade. One of my favourite summer reds, just lovely. I first drank it in Chez Philippe in Marseillan and hunt it out whenever I can. A great restaurant wine as it's not too heavy and doesn't take long to open out.
I must try the rest of the range, seems like you enjoyed it Rosemary and prix sages!!
16 November 2013 at 18:39