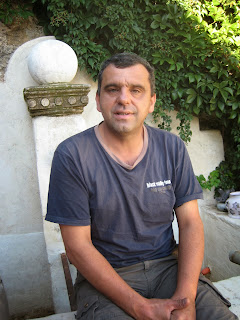 A chance email from Bernard Izarn inviting me a musical soirée led to a cellar visit and a new discovery.  I had never heard of this estate, which is just outside the village of Gabian.  It is a lovely spot, up in the hills above the village.  Bernard explained how he and his wife Christine had been very successful potters in Corsica, working near Ajaccio, for about ten years, but they had actually got married in Faugères, and wanted to return to the Languedoc.  They didn’t really know anything about making wine but they fell in love with a ruined mas and bought it in 2004. 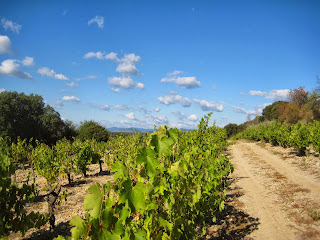 We went for a walk through the vineyards while Bernard told the story of the estate.  They bought 27 hectares of land around the mas, all on old terraces, with five or six hectares of vines, Syrah, Grenache, Carignan, Terret and Cinsaut.  They vines had been pretty neglected; there were trees growing in the middle of vineyards. And for the first couple of years they sent their grapes to the Neffiès coop, and the first summer they camped, while making the mas habitable.

The vineyards are clay and limestone, with some volcanic basalt.  They have old gobelet vines of Cinsaut, and Carignan, both red and white, and Terret Blanc, and some Syrah which is trained on wires.  They believe in lutte raisonée, and use some weed killer once a year, as well as some organic products, and no insecticides, and till the soil. The chemin de l’aquaduct runs near the village of Fouzilhon.  You can see it from their vineyards, an old aqueduct that took water to Beziers, and so there is plenty of water in the subsoil, and no problems with water stress. 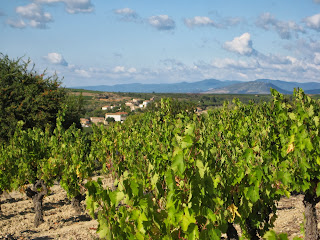 But they what they really wanted to do was to make their own wine.  And as it happened, they met Karen and Manu from Domaine Turner Pageot, who encouraged them and allowed to use their cellar in Gabian for the 2008 and 2009 vintages of Cadablès.  By 2010 the cellar at Cadablès was renovated and useable –‘the fulfilment of our dreams’ enthused Bernard.    ‘C’est mystique’.  Their first vintage comprised 15,000 bottles, which they began selling in 2011, focusing on vente directe, but their wines are also be found at that fine Paris emporium, Fauchon. 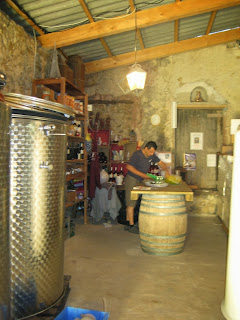 And then it was back to the cellar to taste. They make four wines:

2012 Pays de l’Hérault Blanc – 7.00€
Two thirds Terret to one third Carignan.  All fermented in vat.  The wine stays on its lees until December to give it some weight.  It had quite a rich nutty apply nose, quite intriguing with good weight and firm acidity, and a rustic note.   There were apple notes, floral notes, some minerality and a stony finish.

2012 Pays de l’Hérault Rouge – 6.00€
90% Cinsaut with 10% Grenache.  Quite a deep colour, with ripe raspberry fruit on the nose.  Dry herbal and stony mineral notes on the palate.  Lots of nuances. The grapes are picked quite late and Bernard uses minimal sulphur. Fresh and characterful. 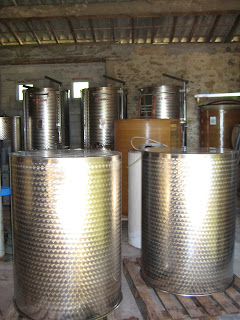 2011 Les Chemins à l’envers, Pays de l’Hérault Rouge - 8.00€
Bernard talked of when he was in the coop; he was told that he should pull up some vines which were worthless, mais je prends le chemin a l’envers, and did not follow the advice.   The blend is Syrah 50%; Grenache 30% and 20% Carignan, made by carbonic maceration.  12 months ageing in old barrels from St Jean de Bébian, an impeccable source.
Good colour.  Rounded nose.  Herbal notes.  Quite dry fruit with supple tannins on the palate, and some garrigues notes.  Sturdy tannins, but nicely fleshy palate and the oak is well integrated.  A satisfying long finish. 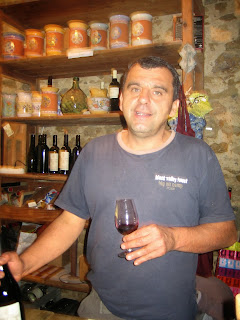 My overall impression was one of characterful wines.   And asked about the future,  Bernard said he wanted to make this beautiful place live in, and to plant more vines, and recreate a pottery.   I couldn’t resist buying a jug.

Alan March said…
Ooh I like it when you uncover a new estate, especially in the local area. Definitely an estate which I shall look up, thanks Rosemary
20 November 2013 at 17:35