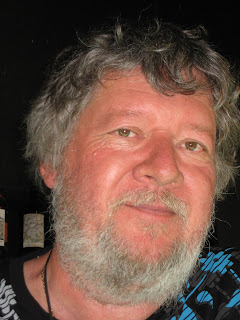 I remember visiting this Corbières coop about 20 years ago, and enjoying a vertical tasting of their best wine at the time, Cuvée Pompadour, with the director, Bernard Pueyo.   He still runs the coop, and very successfully too, and their range of wines has moved with the times.    It was high time for an update.

The coop now has 400 hectares, mainly round the village in the heart of the Corbières hills.  There are 65 members, of whom 18 earn their living from their vines and account for 85% of the production of the coop.  They make Corbières, and a little Vin de France, but no vin de pays, and no Fitou.  When the appellation of Fitou was first suggested, the village was not interested.    The coop dates back to 1921 and they still have the original solid concrete vats, which are excellent for fermentation.

Bernard Pueyo has been there since 1983.  It was his first job, after studies in Toulouse, Montpellier and Bordeaux.   As a student he did stages with the Vignerons Val d’Orbieu and with the oenologist Marc Dubernet, but he has never been tempted to move on.  There has been so much to retain his interest at Embrès.  He quickly realised that their natural handicaps of low yields and a multitude of steep vineyard sites, making mechanisation difficult, could be put to their advantage.  And that they needed to develop their sales in bottle.    The development of the technique of carbonic maceration, a method much favoured by Marc Dubernet, had a fundamental impact on quality.   Back in 1983, Carignan accounted for 90% of the vineyards, but the creation of the appellation led to the planting of more of the so called cépages améliorateurs.  However, for Bernard Pueyo, Carignan is the cépage roi ici, even if it can only account for a maximum of 50% of a blend.   He is an ardent defender of Carignan, and practices carbonic maceration for virtually all his Carignan.    He feels that the technique really improves the variety, but he is not so sure about Syrah, half of which is fermented by carbonic maceration, and the rest is destalked.  Grenache Noir is all destalked: the stalks are too woody and too thick.  It is a complicated variety.  And they have very little Mourvèdre.  It is not a good spot for that tricky grape variety.  Mechanical harvesters are impractical on this terrain, and in any case for carbonic maceration, the bunches must be handpicked.

Bernard looked back on the development of the cooperative.  In the 1980s they improved their winemaking facilities, and then in the 1990s they looked at their vineyards, examining the terroir.  They have schist towards Fitou, and hard limestone going toward Tautavel, both of which limit yields naturally.  Then in between the two there are the grandes terrasses which are free draining, with cooler soils, making for higher yields.      They practice lutte raisonnée but will never be organic; it is too complicated for a cooperative, but they try to reduce the chemical treatments and encourage their members to till instead.  From 2001 they developed a system of vineyard selection, linking a specific vineyard to a particular wine.  And unusually for a cooperative, their  members are paid by hectare, rather than by weight, so that they are guaranteed their remuneration.  This means that they wait until the grapes are all fully ripe, and resist the temptation to pick too early. And now they are looking again at their facilities, investing in new cooling equipment and in some foudres for élevage, which are especially suitable for Grenache Noir, as well as a new warehouse cellar for storage and élevage with a cooling system that creates evaporation, so that the air is not dry, which is all important in the summer temperatures of the Corbières.   They have 800 barriques, of which a quarter are replaced each year, and they are also trying a couple of eggs, also for élevage, but as yet have reached  no positive conclusions.  They are also realsiing the importance of enotourisme with the quai de reception being turned into a restaurant on weekend evenings during the summer months, with an opportunity for visitors and villagers to enjoy the local wines.

We adjourned to their tasting room which is equipped with an enomatic, to ensure that the wines are served in the best conditions, and at the appropriate temperature. 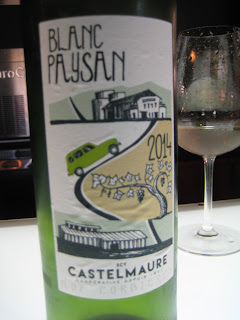 2014 Blanc Paysan, Corbières – 5.40€
Mainly Grenache Blanc (and Gris) plus Vermentino and Macabeo, with a cheerful  4L, the classic car of the vigneron in the 1980s, on the label.  Very fresh with good acidity, quite crisp and rounded.  Vermentino lightens the Grenache, while Macabeo is relatively neutral.  Grenache can sometimes be too heavy, though this is a light 13.5˚.  Apparently there are moves a foot for recognise Grenache Gris for rosé.

2014 Rosé Agricole – 5.40€
Mainly Grenache, 80%, with a little Carignan, and Cinsaut and a splash of Syrah.  However, Bernard doesn’t really like Syrah for rosé, the aroma doesn’t work.  He also makes a Carignan rosé.  This as some rounded raspberry fruit with a fresh finish.

2014 was a very late harvest, with rain causing some problems, so the wines are crisper and more aromatic than usual.  And Bernard is generally pleased with them. 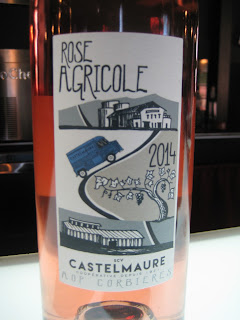 La Buvette, Vin de France – 4.10€
The aim here is a fresh fruity red that is easy to drink.  It is based on Grenache with a little Carignan, to give some structure.   The juice is run off the skins after two or three days and then pressed and then left to slowly finish the fermentation.  Medium colour.  Cherry fruit and acidity rather than tannin.  Easy drinking.

2014 Rouge Vigneron – 5.40€
50% Carignan, carbonic maceration and 30% destalked Grenache Noir and 20% Syrah, with an élevage in vat.  Quite firm red fruit with a tannic streak, and a rustic streak.  Medium weight.  Fruit and garrigues.  Easy to drink. 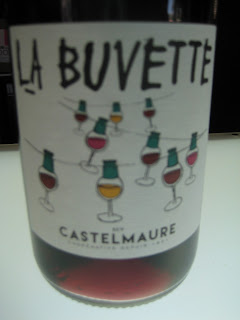 For the last three years they have been working with INRA and the chamber of commerce on the conservation of old vine varieties, creating an inventory of grape varieties, of which there are about 50, including two which are completely unknown.  They are increasing the planting with cuttings, ten cuttings of each.  Carignan has thrown up some 100 different variations, out of which they have selected 20, which are they multiplying, with a view to future development, to consider what to plant in ten years’ time or so. 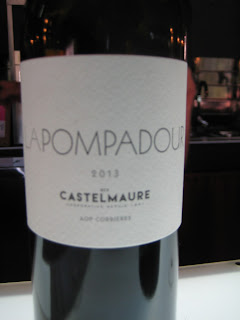 2013 la Pompadour, Corbières.  9.00€
This is not named after Mme de Pompadour, but after a family in the village called Pompadour who was there for some 300 years.  The first vintage was made by Bernard’s predecessor in 1978.  It is classic Corbières, with 50%  Carignan, as well as Grenache Noir and Syrah.   They first began experimenting withy carbonic maceration in 1976, to produce Pompadour in 1978.  It comes from some of the best vineyards.  They now produce 170,000 bottles and Bernard observed that it had lost its concentrated extracted quality to become more drinkable and less powerful.  I liked this 2013.  The Carignan gives a fresh drinkability, even though it is 14˚.  It is ripe and rounded with red fruit and tannic streak ,with some supple tannins.  70% of the blend spends 11 months in barrel, and it is bottled in January.

2013 Grande Cuvée – 11.70€
First produced in 1995.  A blend of Syrah and Grenache, and no Carignan.  All destalked, and the ageing includes some new wood.  2013 was a very good year.  The Grenache suffered from coulure, but what remained, ripened beautifully.   Good colour; ripe fruit some tannins and some oak, and a rounded mouthfeel.  Warmer and more supple than Pompadour. 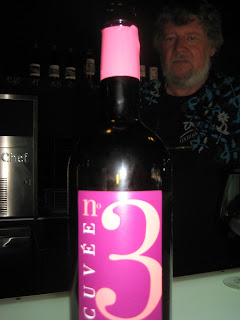 2013 No 3 – 21.00€
Why No 3? The third cuvée, after Pompadour and the Grand Cuvée; made from three grape varieties , and by three people, the coop and Dominique Laurent and Michel Tardieu, two Burgundians, who used to advise them.   40% Syrah with no sulphur; 25% Carignan, destalked rather than carbonic maceration, and 35% Grenache Noir.  The Syrah goes into barrel of which 50% are new, while the Carignan and Grenache goes into older wood, and future vintages will include ageing in foudres. The blending is done after élevage. The wine is firm and structured, quite ripe and rich with a tannic streak and quite a warm powerful finish, at 14.5˚, but nonetheless, it remains harmonious.

We talked about the position of the cooperative in the village.  It has a very important economic role in the fabric of village life.  They now employ ten people as well as  providing an income for the members. Bernard is optimistic for the future.  They sell all the wine they produce, and even run out.  He talked about climate warming, and how that has improved the quality of Carignan.  In 1983 it was difficult to get properly ripe Carignan, even at 12.5˚.  These days it is more likely to be 14.5˚ with the same vintage date, and the flavours benefit from being fully ripened.  And I asked about the cru of Durban.  The INAO has agreed in principle but they need  tom come and look at the vineyards.  The profile of the cru would be Pompadour, with the emphasis on Carignan.  The coops of Cascastel and Tuchan are also involved and some independent producers.

And our tasting finished with 2004, No 3 to show just how well their wines can age.  At 25€ it is a bargain.  Deep colour.  Quite a rich nose, maturing nicely. Lightly leathery, quite rich and concentrated, at 14.5˚ but not heavy.  The label said  No fining or filtered.   And you sense that they are proud to be a cooperative.  It says so on the label: Cooperative since 1921.
Email Post

Bob Rossi said…
As usual, a well-written and enjoyable story. And, as usual, I lament the fact that I never visited this co-op when we were in the Corbieres, and that I can't get these wines here in the US. This sounds like a terrific, very well-run co-op.
9 July 2015 at 14:21