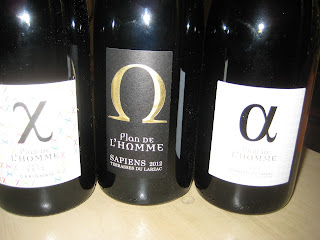 Rémi Duchemin made his reputation as a wine grower as one of two partners who created Mas Mortiès in the Pic St. Loup.  Between 1993 and 2008 he worked with his brother-in-law, Michel Jorcin, and then it was time to move on, and Mas Mortiès was sold.  Initially Rémi had doubts about staying in wine, and indeed in the Languedoc, as he comes from Grenoble, but circumstances combined and he heard that Plan de l’Om was for sale.  And he made his first wine there in 2009, changing the name from Plan de l’Om to Plan de l'Homme.  For those who know about such things, OM has associations with football.

The estate consists of 14 hectares at St. Jean de la Blaquière, on a variety of soils, schist, ruffe and grès, with lots of different plots making for interesting blending possibilities.   The altitude is 250 metres and the cooling effect of the Larzac is very noticeable.     The vines are at average age of 50 years old.  There is no Mourvèdre, and for white wine there is Roussanne, with just a little Grenache Blanc.  Rémi observed that it is easier to buy vines rather than replant an unsatisfactory vineyard – the previous owner had neglected the Grenache Blanc.   And he lives in an old maison de vigneron in St. Felix de Lodez, which provides a perfect cellar on the ground floor.  And that is where we tasted. 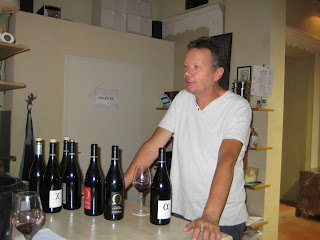 2013 Omega, Florès Blanc, Coteaux du Languedoc – 9.00€
Roussanne with 10% Grenache Blanc, kept in vat.  Light golden colour.  Nicely understated nose.  Herbal white blossom fruit.  Some attractive freshness with some body, and acidity on the finish.   Rémi has a large plot of Roussanne and realised after a couple of vintages that he obtained better results if he divided the vineyard.  The lower part near the river is quite vigorous with richer soil and more vegetal in character, whereas the higher vines are less productive on poor soil.  So for Florès he picks before full maturity to give freshness to the wine, and the higher part of the vineyard is picked ten days later, making for more body and weight.  Roussanne can be exotic; here it is spicier.

2011 Alpha Blanc, Coteaux du Languedoc - 21.00€
Roussanne with some Grenache Blanc; a little more than in Florès.  Part of the Roussanne is vinified in wood, with a further two to three months ageing in barrel, with a little bâtonnage, and the élevage is finished in vat.  Lovely texture.  Elegant.  Oak very well integrated.  Acidity on the finish.  Satisfying structure.  Will continue to age.  A lovely glass of white wine.  Rémi observed that he is not keen on wines that are aged in wood, and he uses acacia, which is less powerful than oak.  Roussanne stays young for a number of years and then quickly fades. 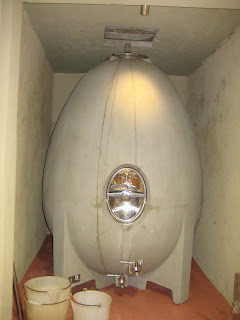 2012 Carignan.  Khi, Vin de France  - 13.00€
The name is a play on words, Khi or Qui?  Carignan is sometimes not as well-known as it should be, though in some quarters it is becoming quite fashionable.   Rémi is a member of the Carignan Renaissance group – apparently they are considering launching a Carignan Day- and he has three hectares of Carignan.    Deep colour.  Rounded supple tannins, with ripe fruit, but not heavy.  Very good balance, long and characterful.   Part carbonic maceration and part égrappé.  No élevage in wood, with the last few months before bottling spent in a cement egg.    Originally all the Carignan was vinified traditionally but it lacked elegance, so in 2012 he made two vats – one of carbonic maceration and one with a traditional vinification.  The carbonic maceration worked particularly well.

2013 Omega, Florès rouge, Coteaux du Languedoc – 9.00€
60% Cinsaut – 50 year old vines.  It may in fact be Oeillade.  25% Syrah and 15% Grenache.  Good colour.  Lovely fresh fruit, with ripe spicy cherries.  Fresh with supple tannins.  Medium weight.  Aged in vat.  Syrah gives structure and Grenache rounds out the palate.   It is not Terrasses du Larzac, as at 9.00€ it is considered a little too cheap – 10.00€ should be the entry level price.  And in any case there is too much Cinsaut.  2014 in contrast was a more difficult vintage  as it was less sunny. 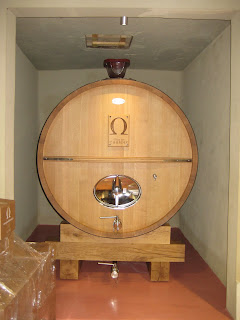 2012 Omega  Habilis, Terrasses du Larzac – 14.00€
This won a gold medal in Decanter’s World Wine Awards.  Made from 50 year old Grenache, an isolated vineyard surrounded by garrigues.   Access is difficult and production is tiny, 20 hl/ha in a good year.  It was farmed conventionally, whereas Rémi works organically, and it is impossible to use a tractor so he leaves it enherbé with the grass.  Initially production dropped for the first two years, but has now increased again as the vines have found their balance with the grass.

20% Syrah, 20% Carignan, 60% Grenache, including some younger Grenache.  Kept in vat for 18 months.  Rémi no longer uses cultured yeast, now that his cellar is established. 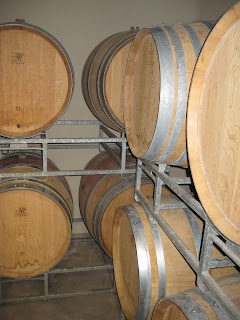 2012 Omega Sapiens, Terrasses du Larzac – 18.00€
Mainly Syrah 70-80%.  With Grenache and a little Carignan.   Uses barrels but not new ones, whereas in contrast Alpha Rouge, although the blend is similar, but from different plots, has some carbonic maceration, with more new wood.

Deep colour. Quite a rounded rich nose and palate.  Ripe black fruit and spice.  Quite alcoholic on the finish at 14.5˚.  Quite solid, firm fruit.  Quite rich.  Very Syrah.  The terroir is complicated for Syrah.  It can be too dry, and there is quite a high mortality rate because of grafting which does not work well in some soils.

And projects for the future?  ‘To obtain the best from my vines’, with lots of attention to detail.  Plan de l'Homme should go far. 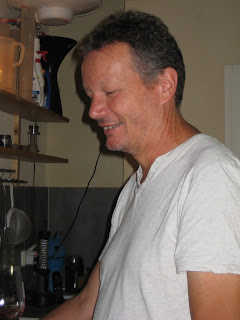 AlanM said…
I was very struck by the wines when I tasted them In Montpellier at the 30th anniversary of Coteaux du Languedoc. As you say the wood is used to add to the wine not to be the master of it. I liked the philosophy, the man and, especially, the wines.
19 July 2015 at 12:19