Domaine Ste Croix – an English estate in the Corbières. 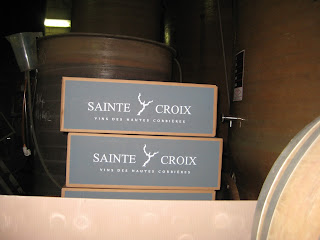 I keep seeing Liz and Jon Bowen from Domaine Ste Croix at various wine fairs, notably Millésime Bio, and on the last occasion at RAW, when I said, I am not going to taste your wines today.  We’ll make a plan for me to visit you in the Corbières, which will be much more rewarding, and fun, And indeed it was.

First of all Liz explained how an English couple land up making wine in the Corbières.   She did a degree in agriculture and agricultural economics, but nothing particularly related to wine, and that led her to work in finance.  Jon read History and worked in various wine shops, and realised that it was what was in the bottle and how it got there that interested him, rather than selling the stuff.  So in 1996 he did the first full time wine making course at Plumpton College in Sussex  and then went on to spend a number of years dong contract winemaking, in France with various organic wine producers, and also in California and Australia, and after working with Pierre Clavel near Montpellier for a couple of years, they decided the time had come to buy something for themselves. 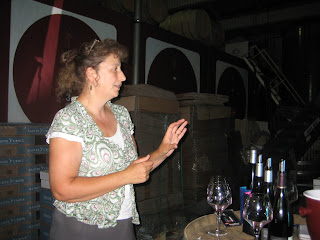 So they looked for old vines, namely Grenache Noir and Carignan, and limestone, and in the Languedoc as vineyards there are affordable.  The Minervois was a possibility, and also Roussillon, and then someone suggested the Corbières and that is where they found limestone with volcanic outcrops in the village of Fraisses des Corbières.  They bought a going concern.  The previous owner had delivered his grapes to the village coop and then to nearby Durban until that cooperative closed down in 1999.  His son helped him to build a winery, but was not interested in working with his father, so after four years it was time to sell.  So in 2004 Liz and Jon bought 15 hectares of vineyards, which they have reduced to 12, as well as a functioning cellar.   Liz explained that they have been organic right from the beginning, but that can be complicated if your neighbours are not, and no one else is in the village, so over the years they have managed to create about six islands of vines where there are no neighbours, by buying, swopping and selling  vineyards.   Jon is the winemaker, but Liz helps with blending and in the vineyards, and also does the paperwork.

Half their vineyards are old Carignan planted in 1900 and 1905, and they also have some Grenache Noir and Syrah, as well as Grenache Blanc and Grenache Gris, from the 1940s, mixed up together, on two distinct vineyards, one of limestone and one of schist.    Illogically Grenache Gris is not recognised in the Corbières; it is deemed to be a mutation of Grenache Blanc, and so not considered a separate variety in the appellation regulations.  Five kilometres further south in Roussillon it is deemed to be a different variety.  Such are the intricacies of French wine legislation.

Liz enthused about Carignan, which is still very much the grape variety of Corbières, even though the maximum percentage is fixed at 50%.  I also asked her about the putative cru of Durban.  It is really only the cooperatives, Embrès et Castelmaure and Cascastel that are interested in it.   There are not enough independent producers to give it any weight – and they don’t really need it.  And we talked about the market.  Liz observed that curiously it is difficult to sell to the UK – it is almost as though the buyers prefer to deal with French when they are buying French wine.  Happily, however,  Cambridge Wine have just taken them on.  The US market is much more lively, and willing to pay higher prices.

We talked about organic and natural wine.   They have gradually moved to minimal SO2 for some wines, and no SO2 for another.  They began using cultured yeast as it was safer at the beginning, and then in 2007 tried out natural yeast, and from 2009 everything has been fermented with natural yeast.  They practice minimum intervention in both winery and vineyard.  This entails spending a lot of time in the vineyards checking to see if they need to treat, but not necessarily doing so.  Again in the cellar they are continuously tasting to check the evolution of their wines, and to see what needs to be done.  They may use a little sulphur at harvest, depending on the condition of the grapes and the weather, and maybe a little at bottling, especially for the export market, with uncertain transport conditions.  Liz does not really see a big difference  between organic and natural wines.   You chose and judge a wine by its flavour, not by the principle.  White wine should not look like lemonade, she laughingly observed.  And they are not biodynamic in the vineyard.  She is interested, but there is a lot to learn, and it needs to be done properly and it is very time consuming, with several constraints.    Sulphur dust is one of the cheapest way to treat the vines, used by most people in the village.  Weed control is the most difficult thing; they leave the grass to grow, which encourages the  bees, and they cut it when it is dying down anyway.    And then we did some tasting: 2014 La Serre, Vin de France – 12.00€
The name comes from a hill in the village.  Grenache Blanc – 54%; Grenache Gris 40% Terret Gris 6% - planted in 1960.  Grown on schist and on limestone.  The wine is fermented ins stainless steel; they picked the grapes before 9 a.m. and keep them cool with dry ice, and then crush and press whole bunches, and the juice goes straight into the vat.  The fermentation temperature is maintained at 17˚ - 18˚C and the wine is left on its lees, and kept in stainless steel vats until it is bottled.  The Terret is made in the same way but kept separately.

Light colour.  The nose initially seemed rather closed, but  evolved beautifully during our tasting with some lovely herbal notes.   Terret adds acidity, proving that you can retain acidity in the white wines éof the area.   They pick one plot relatively early, and the second plot a week later, which adds more complexity.   I loved the firm mineral notes, and the nicely structure palate, with some herbal notes that developed in the glass, making for a long finish.  A lovely glass of wine.

2013 Pourboire Nature, Vin de France – 12.00€
Série électron Libre – their name for describing something a  bit different.  73% Carignan with 27% Syrah.   There is too much Carignan for it to be Corbières and  anyway it is atypical, and contains no sulphur.  They pick quite early to keep the freshness, and the acidity makes the addition of sulphur less necessary.  The grapes are destemmed and fermented in fibre glass vats, and the wine is bottled within 12 months.   It is a very vibrant colour, with a fresh red fruit nose, with some acidity and a streak of tannin on the palate.  It was very appealing, especially lightly chilled, with fresh fruit, and not at all wild or funky!  Liz observed that is no legal definition of natural wine.  It is up to each individual producer.

2012 Le Fournas, Corbières. – 9.00€
A lieu dit in the village relating to the old lime kilns.   45% Carignan with 28% Grenache Noir and 27% Syrah.   This wine accounts for half their production.   Aged in vat.  Quite a deep colour .  Youthful fruit.  Ripe red fruit, especially cherries.  Some tannin, but medium with fresh and rounded.

2012 Magneric, Corbières – 12.00€
After a lieu dit. 42% Carignan, 29% Grenache, 29% Syrah.  The percentages are on their back labels.  This wine is vinified in the same way as Le Fournas, but comes from older vines, so the grapes are destemmed and fermented, and then half of the juice is put into barrel, larger barrels, as they shift toward demi muids, but none are new.  They have a good source of second hand barrels, from Domaine Bertrand Bergé, whose wine they also enjoy drinking!  Firm spice on the palate,with a touch of oak, but nicely integrated, with body and weight, but not heavy.  A rounded finish.

2013 Carignan, Vin de France – 16.00€
92% Carignan, from 1905 with 8% Grenache from 1968.  14.5˚. Destemmed; fermented in tank, and then into wood for 18 months.  Liz explained that the Grenache fills in a couple of holes in the palate.  Deep young colour.  Quite a firm nose.  On the palate red fruit with some rustic tannins and some acidity.  A refreshing appeal. Carignan retains it acidity.  Medium weight.  Youthful and fresh.   A lovely example of the rustic elegance of Carignan.

La Part des Anges Late Harvest 2010. Vin de France Série électron libre  – 20.00€
Carignan dominant, and not made every year.  it all depends on the weather.  75% Carignan with Syrah.  Picked two or three weeks later than the main harvest.   Half is crushed and fermented immediately, and half dried inside in a ventilated space and then crushed.  The fermentation starts and the two are put together and then spend two years in wood, making just one barrel – 800 bottles of 50 cls.  The juice stays on the skins for some time, but the wine  is not muté; the fermentation is stopped at 15˚ by adding so2 and then filtered, leaving about 90 gms/l of residual sugar.

On the nose some oak and a touch of volatility.  And on the palate some tannins and some acidity and some ripe red fruit.   Carignan raisins better than Grenache and retains acidity.  They made it first just to see what they do with Carignan.  And suggested drinking it an apéro or with chocolate.  I favour the chocolate.  Liz mentioned that in this area traditionally everyone made a late harvest wine.
And there were some large glass bonbons in  a corner which prompted the question: Aare you making a rancio.  Yes we are working on it.    That will be fun to try in due course. 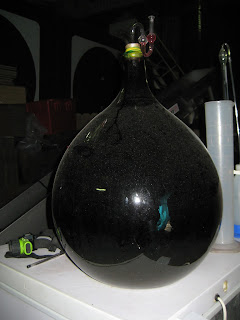